2 ‘The classic trio’ refers to the traditional set of activities used by organisations to select new recruits: application form (used by over 80% of employers) interview (used almost universally) reference-checking (used by over 75% of employers). Although extremely popular in practice, these techniques have been heavily criticised by occupational psychologists on the grounds of validity – how accurately they predict job performance. Validity studies on these techniques reveal them to be markedly poorer than more sophisticated techniques such as personality tests and assessment centres.

3 Accuracy of some sources of selection Source: Smith et al (1989)

4 Reasons for such wide use of the classic trio over more complex psychological approaches include:
They are straightforward and relatively low-cost. They are expected and accepted by job applicants, and less likely to cause stress. A view that psychological tests are controversial – is personality readily measurable and stable over time?

6 Shortlisting This involves boiling down the candidates to a number that is reasonable to invite for interview. Again there is tension concerning the relative merits of methodical and more informal approaches. The systematic approach involves drawing up a list of criteria based on the person specification, and then several different individuals score each application form against these standards. There is an inherent fairness in such an approach. The potential downside is that good candidates can potentially be screened out if the criteria drawn up are too exacting.

7 Online sifting These systems can help reduce the sheer volume of applications often generated by online recruitment. Several approaches can be used: online application/biodata forms that are questionnaire- based and scored electronically online personality tests online ability tests CV-matching technologies utilising key word searches self-assessment questionnaires, which aim to encourage those who score poorly to select themselves out of the selection process.

9 Reasons for the survival of the traditional interview
Many managers are unaware of the research, or regard themselves as exceptions – as intuitive interviewers who would avoid the classic errors. Intrinsic costs are low. It is often used as just one in a range of selection tools. It allows a ‘mutual preview’ – in which the employer and applicant meet face to face and exchange important information that is unrelated to performance prediction. It allows negotiation on topics such as start dates, training provisions and other terms and conditions. It can be useful in labour market public relations. People expect to be interviewed, and may well not feel they have had a fair hearing or respectful treatment if denied one.

12 Good-practice in interview questioning:
Ask open-ended questions rather than direct questions, except when verifying facts. Avoid asking questions that reveal the desired answer. Avoid engaging in arguments – stick to restrained and courteous discussion about issues of importance to the job. Ask one question at at a time.

13 Structuring interviews
Research has consistently revealed that structured interviews have considerably higher predictive validity than unstructured equivalents. Downsides to structured interviews include: the formal atmosphere the lack of scope for the interviewer to probe for more information the fact that the process can appear rushed – as the interviewer struggles to get through all the questions on the schedule. There are two compromise solutions that can help to ameliorate these problems: semi-structuring and mixed approaches.

14 Semi-structuring ‘Focused’ interviewing allows a degree of flexibility, as the interviewer plans a series of topics to cover in the interview, but follows up with additional questions. Mixed approaches The interviewer can use different questioning techniques at different stages of the interview.

15 Telephone interviewing
Increasingly popular, this is a quick and relatively cheap method of deciding which candidates to invite to a formal face-to-face interview. Advantages: Some suggest that telephone interviews reduce unfair bias based on an applicant’s appearance. They are often more businesslike, with the interviewer focusing on the key questions from the start. IRS research indicates that candidates were consistently rated more poorly in telephone interviews than when interviewed face to face. It is important therefore that the same method of interview is used with all candidates.

16 Employment references
This is the final stage in the classic trio – rarely used in the initial selection of an employee, but more to double-check facts and confirm the suitability of the selected candidate. Dangers include: subjectivity carelessness on the part of the former employer a tendency to give ‘good’ ratings/central ratings in a five-point scale fear of apparent bias or, worse, negativity on the part of the former employer – resulting in a reference which confirms basic facts of employment only.

17 Three improvements to the reference-gathering process:
Contacting by telephone (less anonymous) Designing a structured assessment form that relates specifically to the skills and experience necessary for the role Requesting more than two referees. 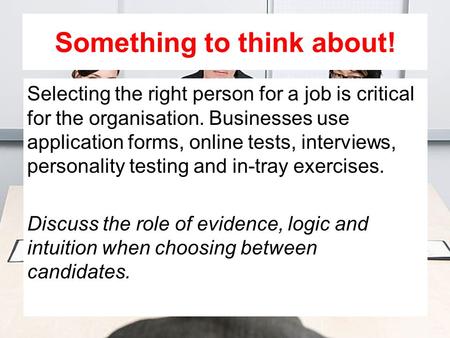 Something to think about! 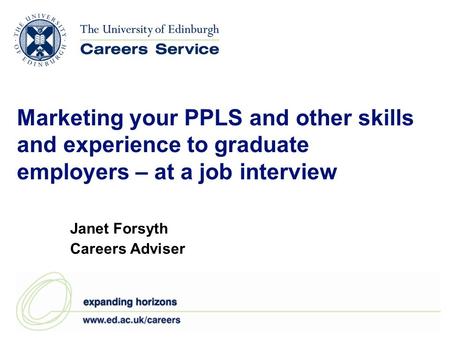 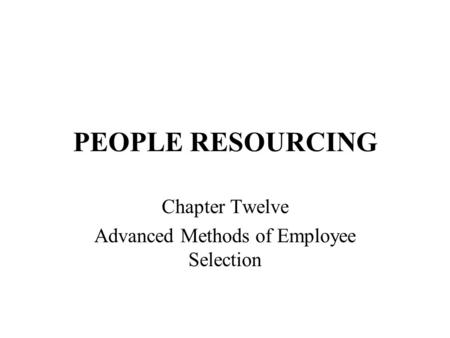 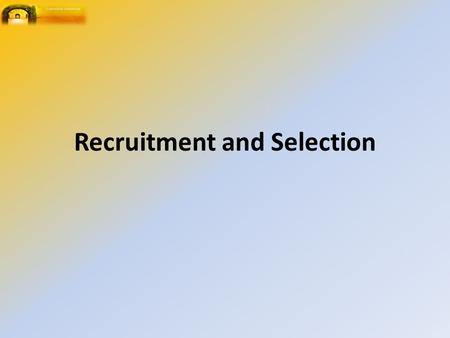 Recruitment and Selection. Selection and Engagement of Personnel Formulation and implementation of systematic approaches to Selection The application. 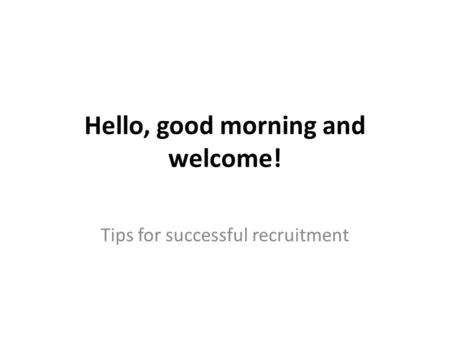 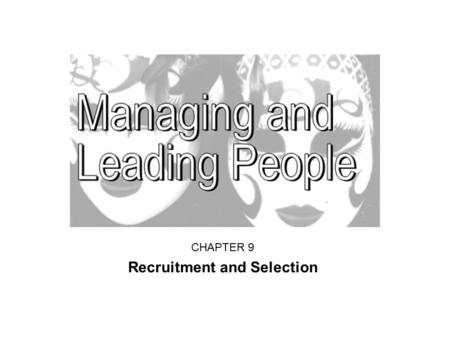 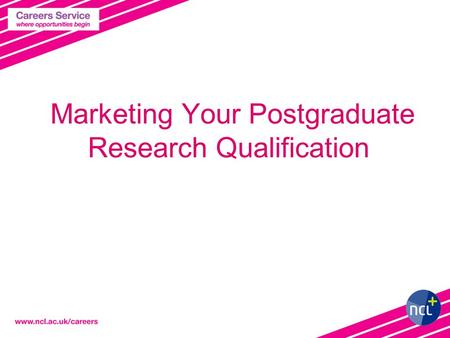 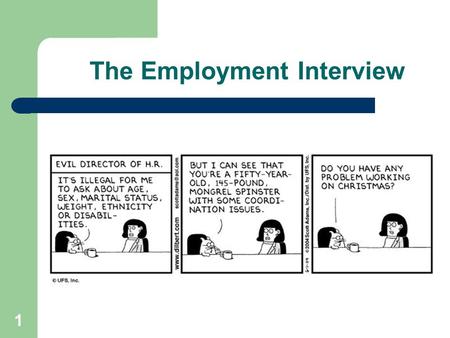 1 The Employment Interview. 2 One of the most widely used hiring tools in the public and private sector Used for selection and recruiting Involve an interaction. 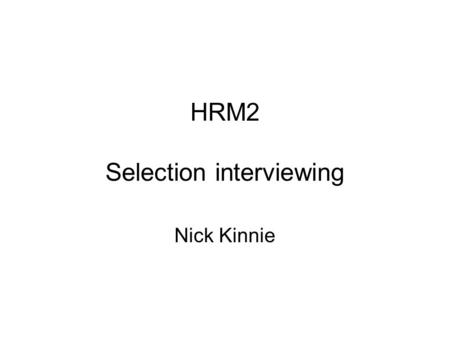 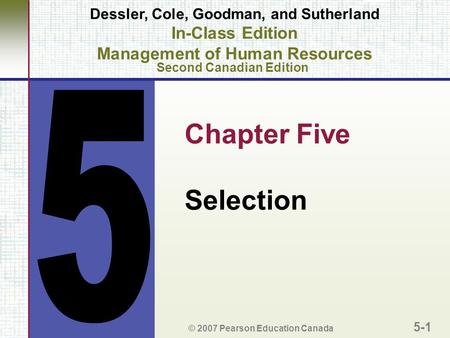 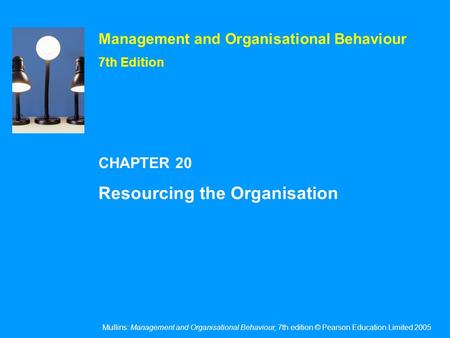 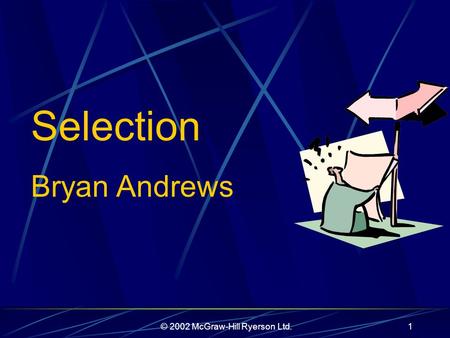 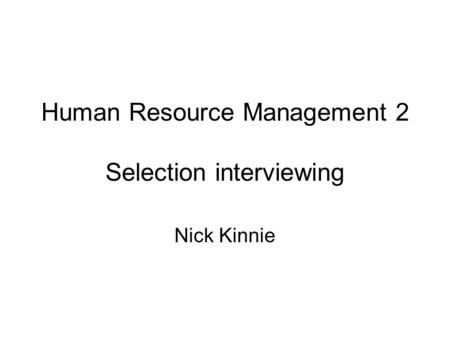 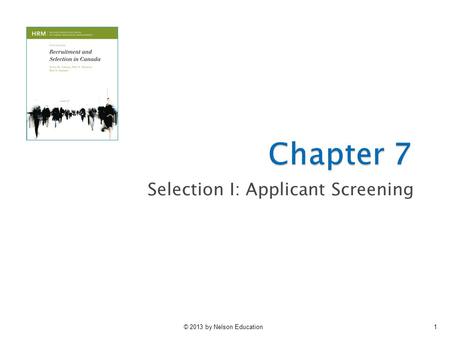 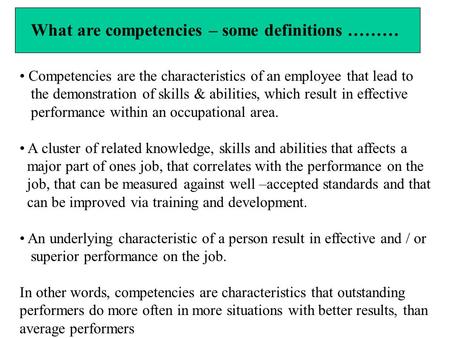 What are competencies – some definitions ……… Competencies are the characteristics of an employee that lead to the demonstration of skills & abilities, 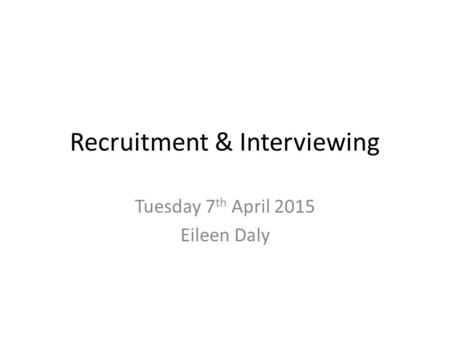 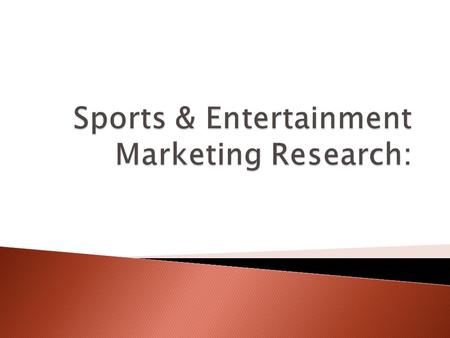  Market research is the process of gathering information which will make you more aware of how the people you hope to sell to will react to your current. 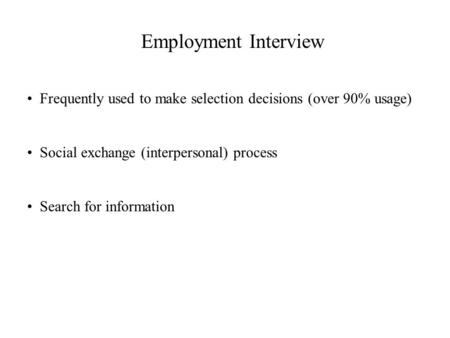 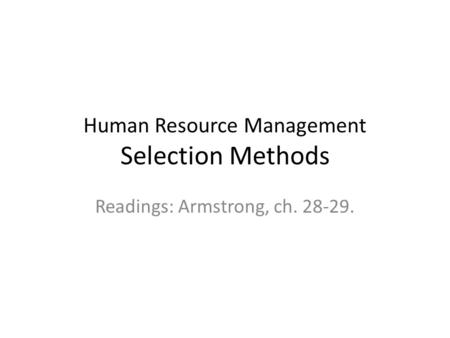 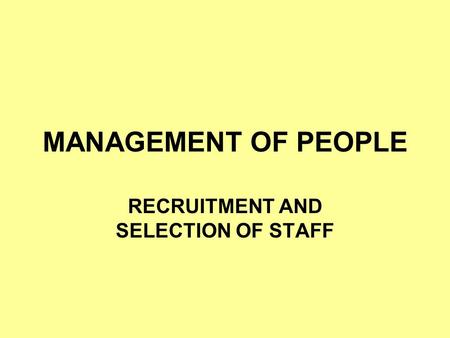 RECRUITMENT AND SELECTION OF STAFF