3 Language Architecture
Relationship between adjacent layers not clear XML $ RDF relationship purely syntactic RDF $ Ontology layer relationship should be something more? RDF is proposed as base for SemWeb languages Used to add metadata annotations to resources Also used to define syntax and semantics of subsequent layers Not clear that RDF is appropriate for all these functions Limited set of syntax constructs (triples) Not possible to extend syntax (as it is, e.g., when using XML) Uniform semantic treatment of triple syntax Non standard KR thesis and model theory May facilitate development of SemWeb to use more standard KR thesis…

5 Semantics and Model Theories
Ontology/KR languages aim to model (part of) world Constructs in language correspond to entities in world Meaning given by mapping to some formal system E.g., a logic such as FOL with its own well defined semantics or a data model such as XQuery data model for XML or (for more expressive languages) a Model Theory (MT) MT defines relationship between syntax and interpretations Can be many interpretations (models) of one piece of syntax Models supposed to be analogue of (part of) world E.g., elements of model correspond to objects in world Formal relationship between syntax and models Structure of models must reflect relationships specified in syntax Inference (e.g., entailment) defined in terms of MT E.g., A ² B iff every model of A is also a model of B

8 Axiomatisation An Axiomatisation can be used to embed RDFS in FOL, e.g.: Triple x P y translated as holds2(P,x,y) Axioms capture semantics of language, e.g.: Problems with axiomatisations include May require large and complex set of axioms Difficult to prove semantics have been correctly captured Axiomatisation may greatly increase computational complexity RDFS ! undecidable (subset of) FOL No interoperability unless all languages similarly axiomatised E.g., in DAML+OIL, C subClassOf D equivalent to x.C(x) ! D(x) But have to axiomatise as holds2(subClass, C, D)

10 (Dis)advantages of CL Thesis
Pros Classes as individuals without HOL extension Can use as a basis for a family of sub-languages Mapping to CL provides easy integration of sub-languages Better fit with RDFS Cons Relatively new and untried Little known about CL sub-languages Confusion w.r.t. FOL compatibility RDFS still requires axiomatisation due, e.g., to rdf:type being in domain of discourse Still no direct semantic interoperability with RDFS Computational pathway only via (performance-damaging) FOL mapping

11 Confusion w.r.t. FOL Compatibility
SKIF/Lbase/CL use same syntax as FOL But allow variables to occur in predicate positions Originally asserted that SKIF semantics coincide with FOL for well formed FOL sentences Subsequently shown to be wrong for FOL with equality E.g., Moral of the story May confuse users more familiar with classical FOL Easy to make mistakes with complex new formalisms Risky to base future of SemWeb on such a new formalism

13 (Dis)advantages of RDF Thesis
Pros (Supposed) interoperability between language layers RDF tools can be used to parse all SW languages into triples Large ontologies/KBs can be stored in triple DBs Cons Achieving real (semantic) interoperability may be difficult or impossible E.g., efforts to layer OWL on top of RDF(S) Triple encoding of complex languages such as OWL is very clumsy Triples introduced by encodings have semantic consequences E.g., first-rest triples used in list syntax have same consequences as ground facts (even though ordering of list may be arbitrary) Not clear if technique can be extended to more expressive languages E.g., full FOL Computational pathway only via (performance-damaging) FOL mapping

14 Summary Formal meaning of SW languages crucial to interoperability
Common semantic underpinning facilitates layered architecture Widely assumed that RDF will provide this underpinning But layering on top of RDF(S) may be difficult/impossible and does not lead to any direct computational pathway Moreover, benefits are not clear Alternative would be to use standard FOL as underpinning Well established and well understood Established family of languages capturing different trade-offs Direct computational pathway for FOL and many sub-languages FO subset of RDF(S) would fit well in this framework Third approach is to use CL as underpinning Relatively new and untested May not solve problems with RDF(S)

15 Perhaps we should consider recalling the Semantic Web bandwagon in order to carry out a safety modification on the RDF component!

Download ppt "Three Theses of Representation in the Semantic Web" 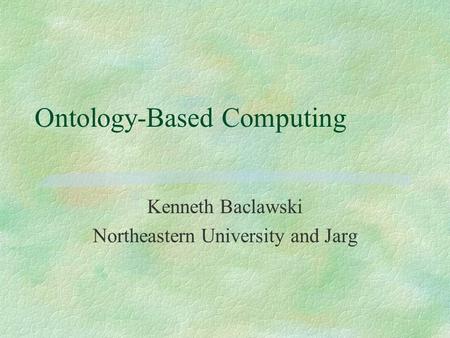 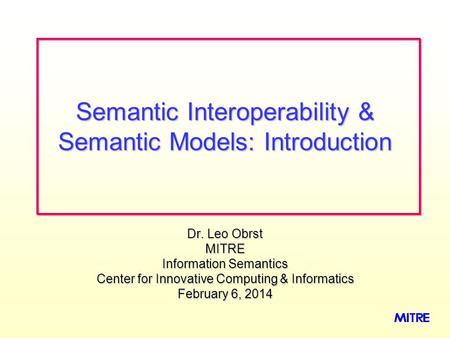 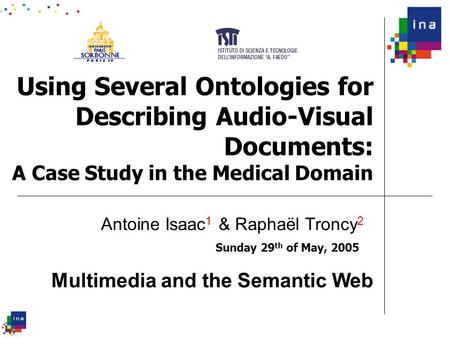 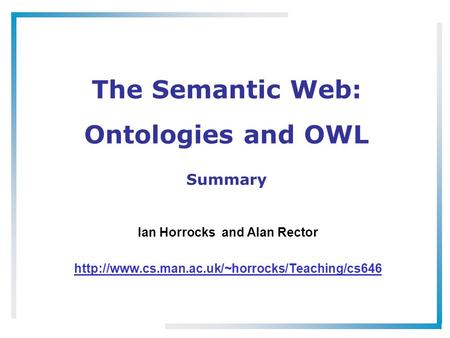 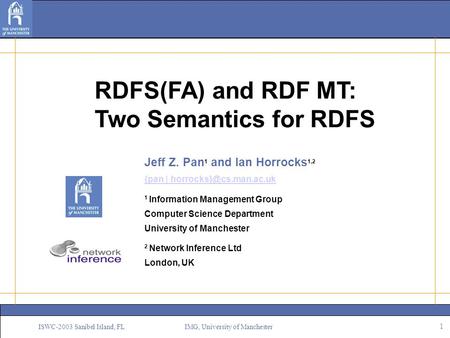 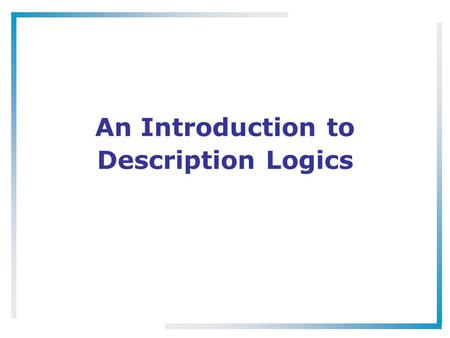 An Introduction to Description Logics 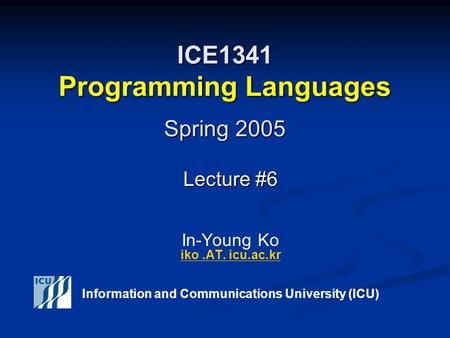 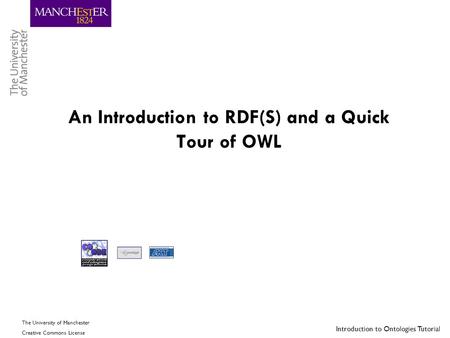 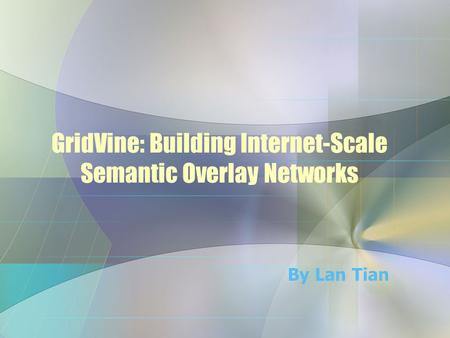 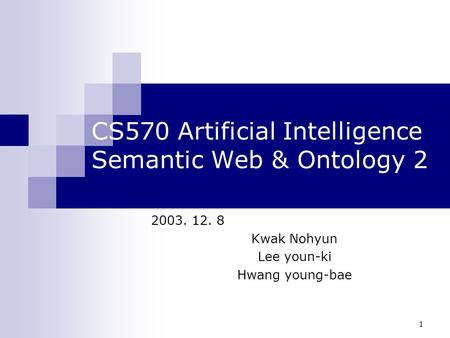 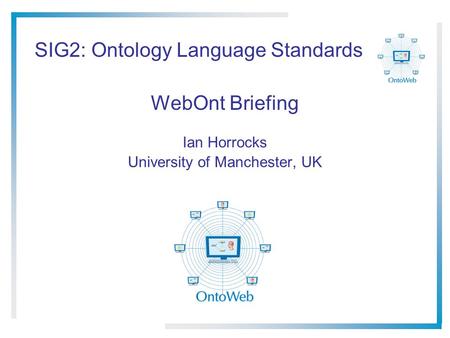 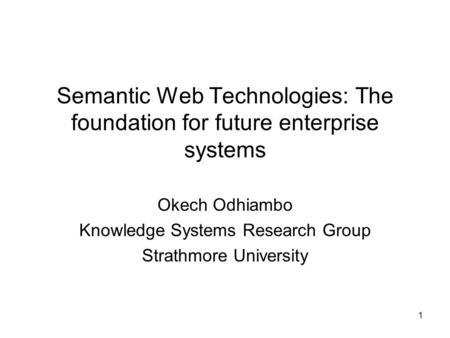 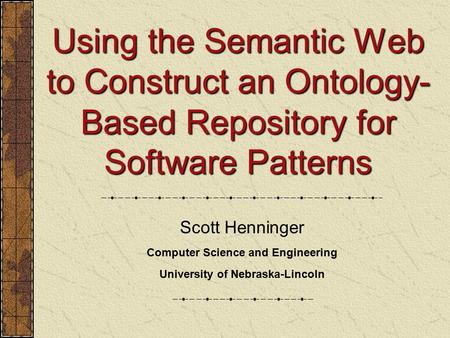 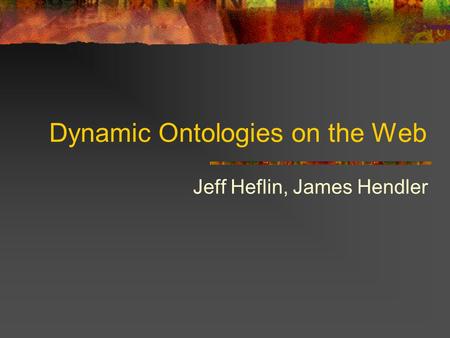 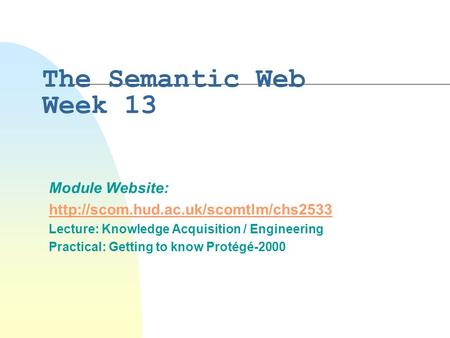 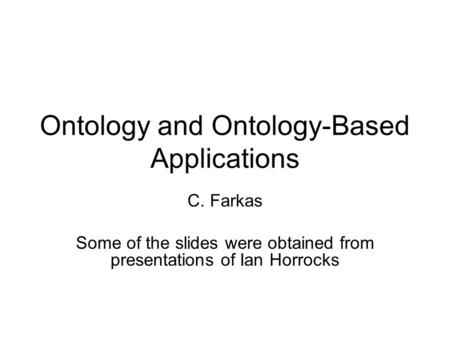 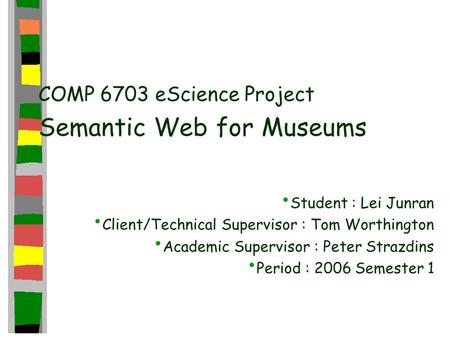