1 ENERGY SOURCES OF THE WORLD!

3 Each energy source is either renewable or nonrenewable!
SOURCES OF THE WORLD!

4 Renewable Energy Sources
Renewable resources can be replenished at a comparable rate to the rate of consumption. Energy sources like hydroelectric power, solar energy, and wind power are considered “perpetual resources” because they run no risk of depletion. ENERGY SOURCES OF THE WORLD!

5 Nonrenewable Energy Sources
Nonrenewable resources are energy sources like petroleum, propane, natural gas, coal, and nuclear energy that take millions of years to form and cannot be regenerated in a short period of time. ENERGY SOURCES OF THE WORLD!

6 Which energy source is the best?
Although oil, natural gas, and coal will remain the primary energy sources for the foreseeable future, a variety of resources will be needed to meet the world’s growing demand. All energy sources have benefits, as well as challenges to overcome. ENERGY SOURCES OF THE WORLD!

7 Costs to Consider! How much will it cost to set-up and operate?
Does the energy source require storage and will the final product be too expensive? Can it be produced on a large scale? How will the production of the energy source impact the environment? ENERGY SOURCES OF THE WORLD!

8 PETROLEUM PETROLEUM is formed from animals and plants that lived
millions of years ago when heat and pressure turned decayed matter into crude oil. Transportation fuel for the world Basis of many products, from prescription drugs to plastics Economical to produce, easy to transport High C02 emissions Found in limited areas Supply may be exhausted before natural gas/coal resources Possible environmental impact from drilling and transporting PROS nonrenewable CONS

9 PROPANE PROPANE is produced as a byproduct from natural gas processing and crude oil refining. It burns hotter and more evenly than other fuels. Yields 60–70% less smog-producing hydrocarbons than gasoline/diesel fuel or propane exhaust Nontoxic and insoluble in water Doesn’t spill, pool, or leave a residue Uses some fossil fuels in conversion Highly flammable Less energy in a gallon of propane than in a gallon of gasoline or diesel fuel PROS nonrenewable CONS

11 COAL COAL is formed from trees and plants in vast primeval forests, when heat and pressure turned decayed matter into coal. Coal is a part of the fossil fuels family. Abundant supply Currently inexpensive to extract Reliable and capable of generating large amounts of power Emits major greenhouse gases and acid rain High environmental impact from mining and burning Mining can be dangerous for miners PROS nonrenewable CONS

14 HYDROELECTRIC HYDROELECTRIC POWER is generated when flowing water turns turbines to run generators that convert energy into electricity. No emissions Reliable Capable of generating large amounts of power Output can be regulated to meet demand Environmental impacts by changing the environment Hydroelectric dams are expensive to build Dams may be affected by drought Potential for floods PROS renewable CONS

15 WIND POWER WIND POWER is generated when wind turns turbines to run the generators that convert energy into electricity, which is then stored in batteries. No emissions Affordable Little disruption of ecosystems Relatively high output Output is proportional to wind speed Not feasible for all geographical locations High initial investment Extensive land use PROS renewable CONS

16 BIOMASS BIOMASS is produced from vegetable oils, animal fats, recycled restaurant greases, and other byproducts of plant, agricultural, and forestry processing or industrial and human waste products. Abundant supply Fewer emissions than fossil fuel sources Can be used in diesel engines Auto engines can easily be converted to run on biomass fuel Source must be near usage to cut transportation costs Emits some pollution Increases nitrogen oxides, an air pollutant emissions Uses some fossil fuels in conversion PROS renewable CONS

17 ETHANOL ETHANOL is a subset of biomass that is manufactured from alcohols, ethers, esters, and other chemicals extracted from plant and tree residue. It can be made from corn, sugar, wheat, and barley. Easily manufactured Fewer emissions than fossil fuel Carbon-neutral (C02 emissions offset by photosynthesis in plants) Extensive use of cropland Less energy in a gallon of ethanol than in a gallon of gasoline or diesel fuel Costs more than gasoline to produce Currently requires government subsidy to be affordable to consumers PROS CONS

18 HYDROGEN HYDROGEN is found in combination with oxygen in water, but it is also present in organic matter such as living plants, petroleum, or coal. Hydrogen fuel is a byproduct of chemically-mixing hydrogen and oxygen to produce electricity, water, and heat. It’s stored in a “cell” or battery. Abundant supply Water vapor emissions only Excellent industrial safety record More expensive to produce than fossil fuel Systems Currently uses a large amount of fossil fuels in the hydrogen extraction process Storage and fuel cell technology still being developed PROS renewable CONS

19 GEOTHERMAL GEOTHERMAL ENERGY is generated by heat in the earth’s core. It is found underground by drilling steam wells (like oil drilling). There is a global debate as to whether geothermal energy is renewable or nonrenewable. Minimal environmental impact Efficient Power plants have low emissions Low cost after the initial investment Geothermal fields found in few areas around the world Expensive start-up costs Wells could eventually be depleted PROS renewable nonrenewable CONS

20 ENERGY SOURCES OF THE WORLD! 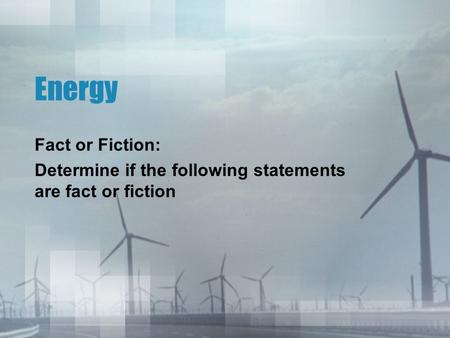 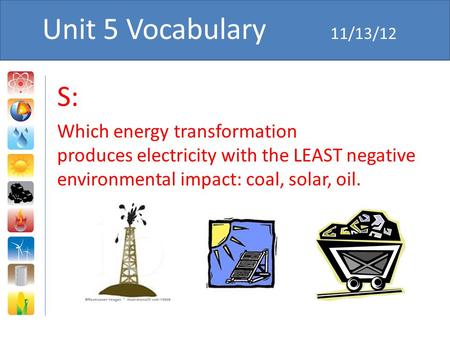 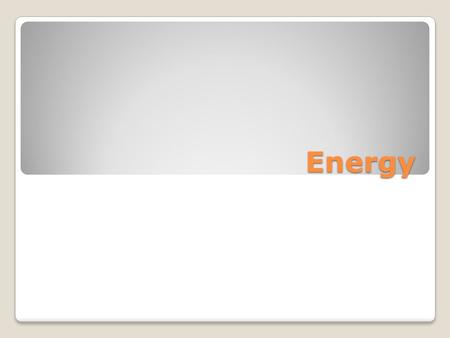 Energy. On your poster What is it? Brief history How is it produced/extracted/harnessed? How is it used? The types Diagram of how it works.