2 Wave Definitions There is the crest, the point at the top
The trough, the point at the bottom, (opposite of crest) Medium the material of which a wave moves, (for an ocean wave it is the ocean) Wavelength, the distance between two crests measured in meters. The Greek letter lambda (λ) is used to abbreviate wavelength. Frequency: the number of crests that pass a given point in one second. Unit is hertz (waves/second) Scientists use frequency and wavelength interchangeably when describing EM waves.

3 Parts of a Wave

5 Electromagnetic Waves
Electromagnetic waves: transverse waves made of vibrating magnetic and electric fields. These two fields are at right angles to each other. Travel at the speed of light.

6 Electromagnetic Waves
Electromagnetic waves do not require a medium. They will travel through the vacuum of space. We know this as we see light from the sun and other stars.

7 Electromagnetic Spectrum
The electromagnetic spectrum is the full range of all the EM-waves arranged from the lowest to the highest frequency.

10 Infrared Waves Infrared means “below red.” Infrared waves are known as heat waves. When you sit outside on a sunny day, you feel warm because of the infrared waves from the sun. Campfires give off lots of IR light.

11 Infrared Light Many animals use infrared light to find their prey. They see the heat waves given off by the body heat of their victim. The Predator used infrared to find his victims in the movie. Thermal imaging devices use this principle.

13 Rainbows The colors of light are easy to remember by the acronym ROYGBIV. Red, orange, yellow, green, blue, indigo, and violet.

14 Ultraviolet Light Means “beyond violet.”
Shorter wavelengths, higher frequency, and higher energy than visible light. Our sun produces a lot of this light. Causes suntans/sunburns. Can be used to disinfect medical instruments. The ozone layer protects us from much of the ultraviolet radiation.

16 Gamma Rays Highest frequency, highest energy waves. This makes them the most penetrating. Radioactive materials emit gamma rays, so they can be very dangerous as they can kill cells as they pass through. In controlled conditions they can be used to treat cancer.

18 What causes light? All light is produced by “excited” atoms.
When an atom absorbs energy, an electron will be bumped to a higher level. This produces an unstable or “excited” atom.

19 Emitting Light Atoms do not want to be unstable.
The electron will lose the extra energy by giving off a photon, allowing it to fall back to its original level. 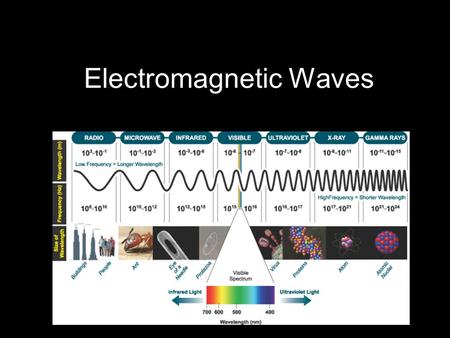 Electromagnetic Waves. What are they? Electromagnetic waves are energy which radiate from a source in a wave pattern – troughs and crests Waves can be.