6 THE EUROPEAN UNION 1992: the Maastricht Treaty was ratified, which rechartered the EC as the European Union.

7 Basis of the EU The European Union is based on the rule of law and democracy. It is neither a new State replacing existing ones nor is it comparable to other international organisations. Its Member States delegate sovereignty to common institutions representing the interests of the Union as a whole on questions of joint interest. All decisions and procedures are derived from the basic treaties ratified by the Member States.

12 European Commission http://europa.eu.int/comm/index_en.htm
Embodies and upholds the general interest of the Union. 20 members: 1 President, 2 vice-Presidents & 17 Commissioners Elected every 5 years by the Member States after they have been approved by the European Parliament. As the EU’s executive body, it: Drafts legislation for Parliament & Council; Implements legislation Guardian of treaties, along with Court of Justice Represents EU internationally Manages the 15 EU agencies

13 President of the EU President is appointed (not elected) by the
EU Council for a 5-year term and confirmed by Parliament. Romano Prodi (Italy), Confirmed Sept. 1999; His term ends 2004 Former law/political science professor with many academic publications Commissioners:

16 CURRENT EU ISSUES 1. Enlargement:
*Ten countries joined the EU in 2004, making 25 countries total. 2. The Euro: *The Common Currency for the EU Countries. 3. Multilingualism: *20 official languages (as of 2004) for 25 countries. 4. Openness, Access and Transparency: *How to get the documents to the people? 5. Safety & security of Europe: *Against terrorism.

20 NORWAY? Norway has never been a member of the EU, but is ‘partners’ with EU for certain economic reasons. Their economy has historically been very good and they had no desire to ‘merge’ with lesser economies. As of 2002, the Norwegian economy began to decline. There is a now a developing majority of Norwegian that want Norway to join the EU.

22 THE EURO The euro – Europe's new single currency - represents the consolidation and culmination of European economic integration. Its introduction on January 1, 1999, marked the final phase of Economic and Monetary Union (EMU), a three-stage process that was launched in 1990 as EU member states prepared for the 1992 single market.

23 The EURO Early 1990’s 1990: Aimed at boosting cross- border business activity, the first stage of EMU lifted restrictions on movements of capital across internal EU borders. 1994: The European Monetary Institute was established in Frankfurt to pave the way for the European Central Bank. 1999: the Euro was introduced as the single currency for eleven EU member states: Austria, Belgium, Finland, France, Germany, Ireland, Italy, Luxembourg, the Netherlands, Portugal, and Spain.

26 EU PUBLICATIONS * The EU publishes on a multitude of topics in a variety of formats Statistics, parliamentary reports, current events, debate, regulations, and news items all fall within the range of EU publication topics *The type of publications includes periodicals, monographs, and annuals. *The format of publications is either paper, fiche or electronic, with Internet being heavily utilized since 2000.

27 Types of Publications EU publications fall into a number of EU-specific categories: Green Papers, White Papers, Bulletins, Communications, Reports, Memorandum, and Press Releases. The main division of these items is between General Information and Official Documents.

30 EUROPEAN UNION DEPOSITORIES
The European Union has a long standing tradition of maintaining European Documentation Centers (EDCs) throughout the EU member countries, with a total of 275 EDCs world-wide. The EU presently supports over fifty depositories in the United States. The earliest of these depositories were established with the creation of the ECSC in the 1950’s.

31 EU Depositories Holdings
EU Depositories Holdings *Depositories and EDCs automatically receive one copy of a majority of EU produced items free of charge, in the designated language. * The only items that are not part of this agreement are the Technical Reports and the Press Materials issued by the Commission's Offices located outside of Brussels. *The public can purchase official EU documents from the Office for Official Publications (EU-OP). Purchase requests can be made via the internet. *There is a large cache of free current information on EU web page.

32 OU has been an EU Depository since 1973
From The EC/EU items were housed in Librarian’s Office in the Great Reading Room until they were moved to the closed stacks of the Government Documents, and shelved under the EU call number. It was useful to have them located in one collection, but difficult to access because of the difficult call numbering system. In 1993, the EU Documents were moved to the Main Library and cataloged under the LC call number. The resources are now accessible from the main computer, but are scattered through-out the building.

33 University of Oklahoma EU Center http://www.ou.edu/eucenter/
In 2001, OU received a grant from the European Commission, to support a European Union Center for the school. OU’s EU Center is one of fifteen in the nation. 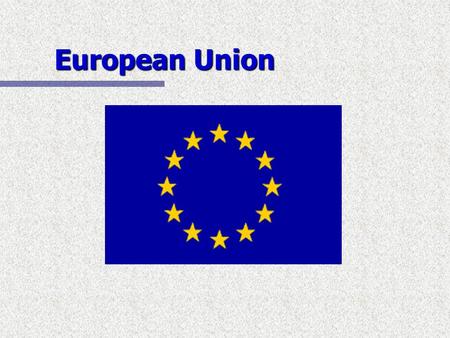 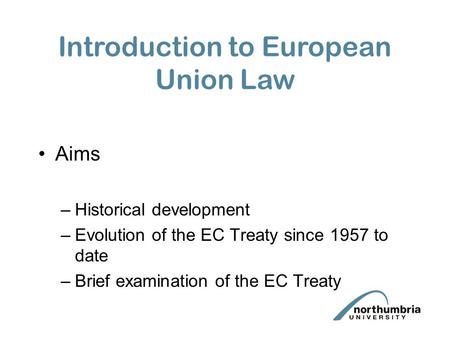