3 Discussion How did you feel when subjected to constant crying?
What frustrations did you have? How do you react to crying children?

4 Is this child abuse? A girl is slapped for screaming at her mother; the slap stings, but leaves no lasting mark or pain. A boy is punished in a way that requires stitches. A father burns his daughter’s palms with a lighted cigarette when he finds her smoking. A mother is careless and spills scalding coffee on her daughter, who is seriously burned. A boy’s arm is broken after wrestling with his father for sport. A girl is spanked so hard she is badly bruised, but the father says he did not mean to hurt her. A boy is grounded for a week for a minor offense. A father takes away his son’s driver’s license for getting a parking ticket.

5 Discussion Is there a difference between child abuse and discipline?
Where do we draw the line? Define Child Abuse. What do you considered child abuse?

6 Fatalities Each day in the United States, more than 3 children die as a result of child abuse in the home. Most of the children who die are younger than six years of age. More children (age four and younger) die from child abuse and neglect than any other single, leading cause of death for infants and young children.

7 In 2000, more than 17,000 Utah children were reported to Child Protective Services as alleged victims of child maltreatment. About 8,500 of those cases were substantiated. More than three children die each day in the United States from child abuse and neglect. In 1991, 838 children died as a result of physical abuse by a parent (Daro & McCurdy, 1992). By age 18, one of every four girls and one of every six boys has been sexually abused. It is estimated that 100, ,000 children are sexually abused each year.

8 Eighty-five percent of sexual assaults on children are committed by someone the child knows and usually trusts Child abuse is a very serious problem in every community nationwide. Child abuse knows no boundaries. It happens in every class, race, ethnic group, educational, and economic group. No family is immune. A report of child abuse is made – on average - every 10 seconds. More children (age four and younger) die from child abuse and neglect than any other single leading cause of death for infants and young children. This includes accidental falls, drowning, choking on food, suffocation or fires in the home. Each day in the United States, more than three children die as a result of child abuse in the home.

13 Sexual Abuse – any inappropriate sexual exposure or touch by an adult to a child or an older child to a younger child. This includes, but is not limited to: fondling, sexual intercourse, sexual assault, rape, date rape, incest, child prostitution, exposure, and pornography. It does not matter whether the victim was forced or tricked into any of the above, it is considered sexual abuse by the state of Utah. Physical indicators of sexual abuse: difficulty in walking or sitting, torn, stained, or bloody underclothing, pain or itching in genital area, bruises or bleeding in rectal/genital area, venereal disease. Behavioral indicators of sexual abuse: age-inappropriate sexual knowledge/sexual touch, abrupt change in personality, withdrawn, poor peer relationships, unwilling to change for gym or participate in physical activities, promiscuous behavior/seductive behavior, drop in school performance/decline in school interest, sleep disturbances, regressive behavior (i.e., bed wetting).

14 Sexual Assault of Children
Convicted rape and sexual assault offenders serving time in state prisons report that two-thirds of their victims were under the age of 18. Among rape victims less than 12 years of age, 90% of the children knew the offender, according to police-recorded incident data. Frequently, the person who sexually molests a child is also a child.

15 Influence of Substance Abuse
Nearly one-half of substantiated cases of child neglect and abuse are associated with parental alcohol or drug abuse. It is estimated that one in every four children in the United States (28 million) are living in a household with an alcoholic adult. Men and women serving time in the nation’s prisons and jails report a higher incidence of abuse as children that the general populations.

18 STRESSORS ASSOCIATED WITH THE PARENT:
Abused as a child Single parent Spouse is gone much of the time Divorce Alcohol or other drugs. Low self-esteem Isolation Husband uninvolved and critical Emotional immaturity Postpartum depression Unrealistic expectations Stress of unemployment Financial stress Other stresses of any kind. Mental illness

19 Prevention Never discipline your child when your anger is out of control. Participate in your child’s activities and get to know your child’s friends. Never leave your child unattended, especially in the car. Teach your child the difference between “good touches,” “bad touches” and “confusing touches.” When your child tells you he or she doesn’t want to be with someone, this could be a red flag. Listen to them and believe what they say. Be aware of changes in your child’s behavior or attitude, and inquire into it. Teach your child what to do if you and your child become separated while away from home. Teach your child the correct names of his/her private body parts. Be alert for any talk that reveals premature sexual understanding. Pay attention when someone shows greater than normal interest in your child. Make certain your child’s school or day care center will release him/her only to you or someone you officially designate.

20 Reporting of Abuse Approximately 3 million reports of possible maltreatment are made to child protective service agencies each year. In calendar year 2000, these referrals concerned the welfare of approximately 5 million children. The actual incidence of abuse and neglect is estimated to the three times greater than the number reported to authorities. Child abuse is reported – on average – every 10 seconds. An estimated 879,000 victims of maltreatment were substantiated after investigation by child protective service agencies in 2000. Nine in 10 Americans polled regard child abuse as a serious problem, yet only 1 in 3 reported abuse when confronted with an actual situation.

21 What to do. Be open and understanding.
Don’t try to conduct an investigation, yourself. If the child tells you of the sexual abuse immediately after it occurred, DO NOT bathe the child, or wash or change his or her clothes. Let the child talk as much as he or she wishes. Understand that the child is probably having mixed feelings. Believe the child. Explain what you will do next to help them.

22 Reporting the abuse Report the abuse.
Children’s Justice Center (sexual abuse only) Local Police Division of Child and Family Services, Daytime , after-hours UNDER UTAH LAW, EVERYONE HAS A LEGAL OBLIGATION TO REPORT SUSPICION OR KNOWLEDGE OF CHLD ABUSE!!!! 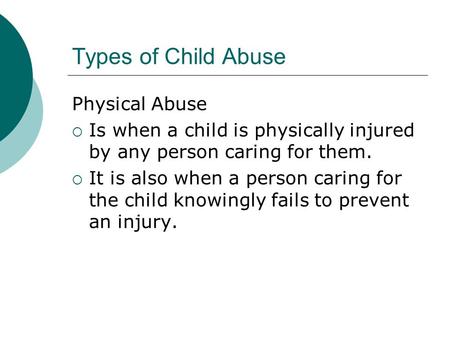 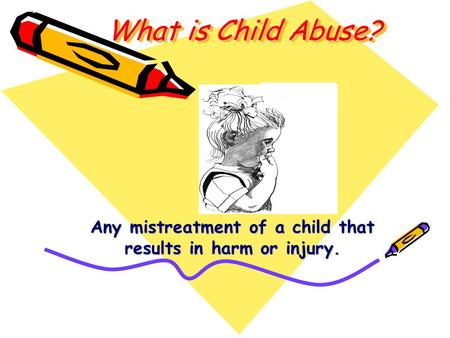 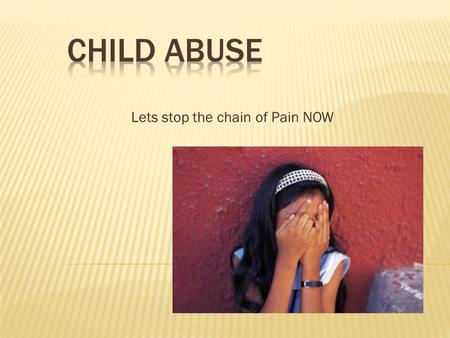 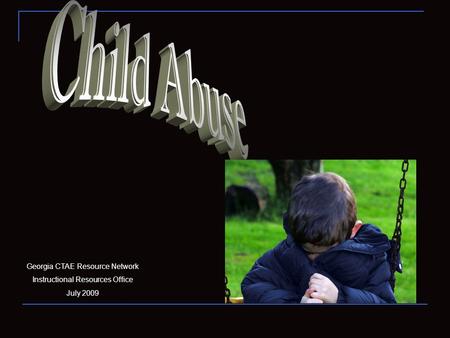 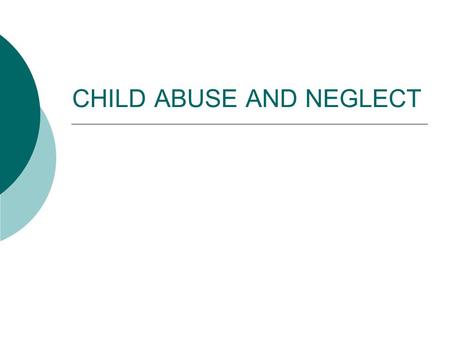 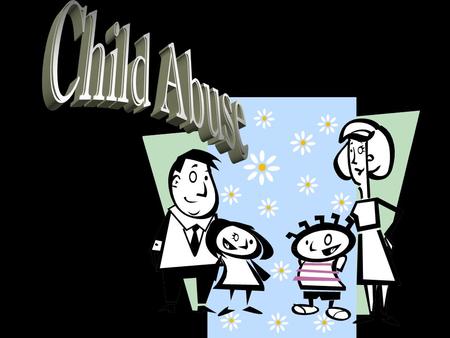 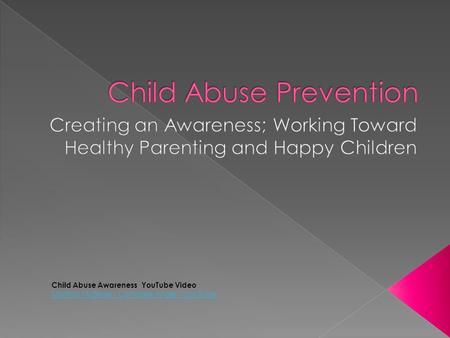 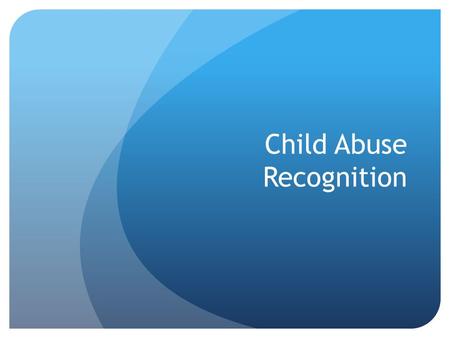 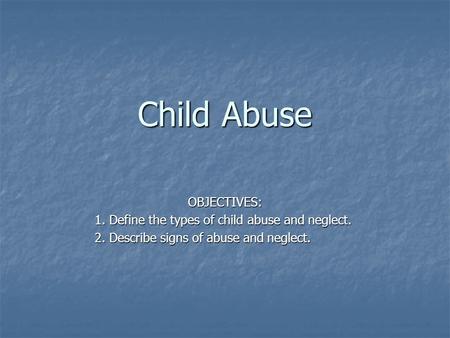 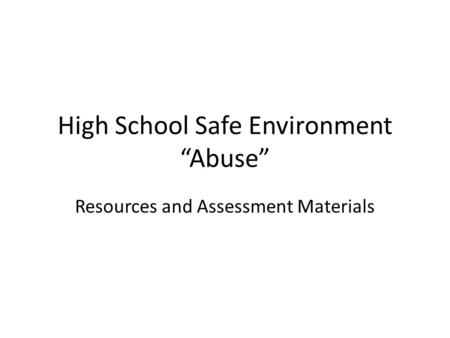 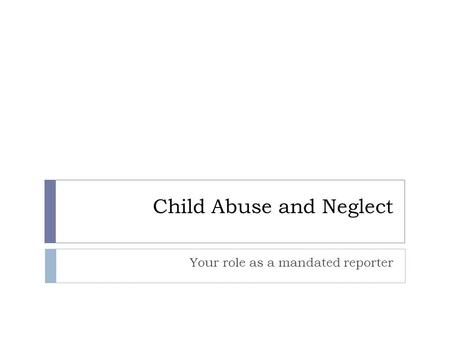 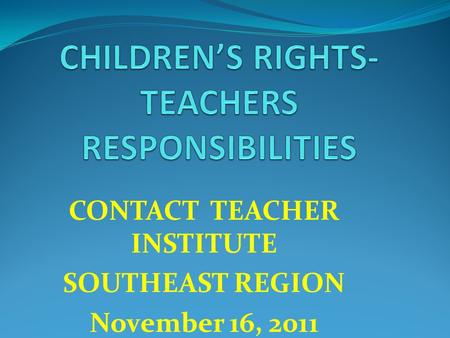 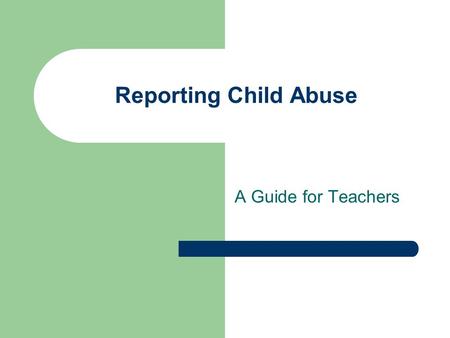 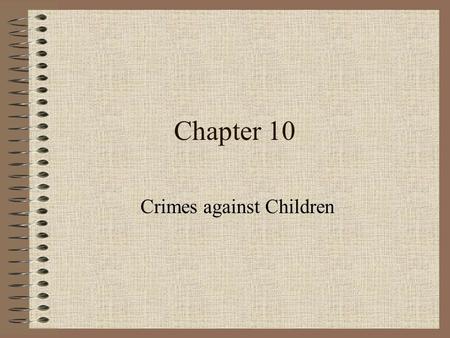 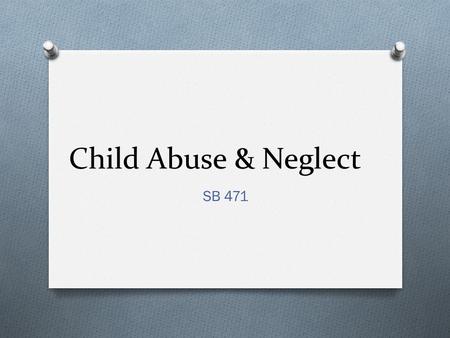 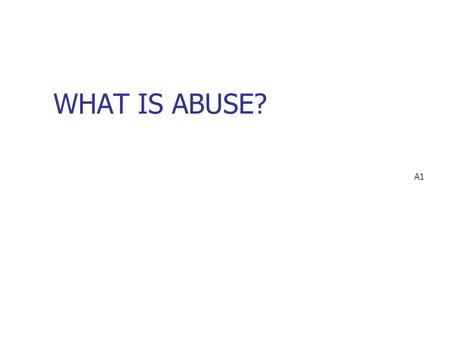