2 What is GDP? Gross Domestic Product (GDP)’s technical definition is the total value of the production and consumption of all the goods and services of the country.

4 Explanation of Formula
Consumer spending is the sum of expenditures by households on durable goods, nondurable goods, and services. Examples include clothing, food, and health care. Investment is the sum of expenditures on capital equipment, inventories, and structures. Examples include machinery, unsold products, and housing.

6 What does GDP indicate? This number is important because it gives an indication of how successfully society is addressing the scarcity problem. A larger gross domestic product, there are more goods and services that can be used to satisfy unlimited wants and needs.

10 Is GDP an effective indicator?
GDP can show a country’s production, but it is not a reliable indicator for a country’s welfare or well-being.

11 What is GNP? Gross National Product (GNP)’s technical definition is the combined value of all the final goods and services produced in a country during an accounting year, including net factor income from foreign countries.

12 How is GNP computed? GNP can be solved using the formula:
GNP = GDP + Net factor income from abroad (difference between income earned in foreign countries by residents of a country and income earned by foreign nationals domestically).

13 Explanation of Formula
GNP includes the final value of goods and services produced by the residents of a country, without considering their geographical location. Based on this definition, net income from abroad is necessary since in order to focus only on a specific country, income from foreign residents must be subtracted.

14 What does GNP indicate? GNP helps to measure the contribution of residents of a country to the flow of goods and services within and outside the national territory.

15 What is excluded in GNP? Similar to that of GDP (household work and illegal goods/services, etc.)

17 Is GNP a good indicator? It is not an effective indicator for a country’s welfare.

20 GDP GNP Definition: An estimated value of the total worth of a country’s production and services, calculated over the course on one year GDP (+) total capital gains from overseas investment (-) income earned by foreign nationals domestically Stands for: Gross Domestic Product Gross National Product Formula for Calculation: GDP = consumption + investment + (government spending) + (exports − imports) GNP = GDP + NR (Net income from assets abroad (Net Income Receipts)) Layman Usage: Total value of products & Services produced within the territorial boundary of a country Total value of Goods and Services produced by all nationals of a country (whether within or outside the country) Application (Context in which these terms are used): To see the strength of a country’s local economy To see how the nationals of a country are doing economically 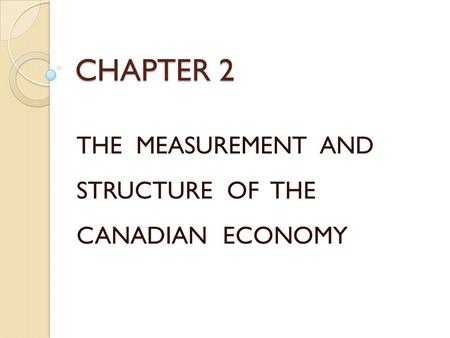 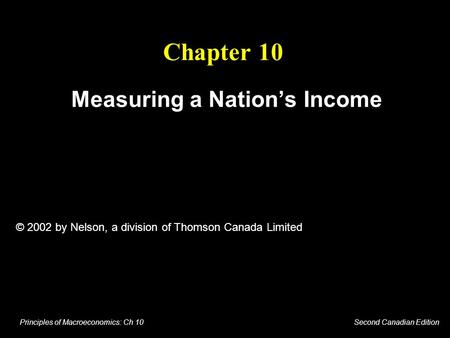 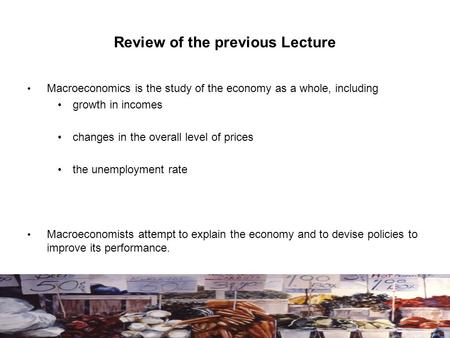 Review of the previous Lecture Macroeconomics is the study of the economy as a whole, including growth in incomes changes in the overall level of prices. 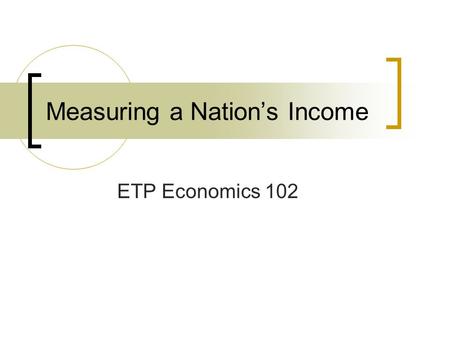