2 ORIGIN The word "gangrene" comes from the Greek "ganggraina" denoting "an eating sore that ends in mortification".

3 MEDICAL DEFFINITION: Gangrene: The death of body tissue due to the loss of blood supply to that tissue, sometimes permitting bacteria to invade it and accelerate its decay.

4 NNNNNNNNN Gangrene is a complication of necrosis “ N cell death N ” characterized by the decay of body tissues, which become black and appearing “rotten”. It is caused by infection or ischemia, such as a thrombosis.

5 GANGRENE… WHAT IS IT??? It is usually the result of critically insufficient blood supply. Often associated with diabetes and long-term smoking. Condition is most common in the lower extremities.

8 DRY GANGRENE Dry gangrene begins at the distal part of the limb due to ischemia and often occurs in the toes and feet of elderly patients due to arteriosclerosis. Dry gangrene spreads slowly until it reaches the point where the blood supply is inadequate to keep tissue viable. The affected part is dry, shrunken and dark black, resembling mummified flesh.

9 DRY GANGRENE If the blood flow is interrupted for a reason other than severe bacterial infection, the result is a case of dry gangrene. People with impaired peripheral blood flow, such as diabetics, are at greater risk of contracting dry gangrene.

10 DRY GANGRENE The early signs are a dull ache and sensation of coldness in the affected are. If caught early, the process can sometimes be reversed by vascular surgery. If necrosis sets in, the affected tissue must be removed and treated like a case of wet gangrene.

14 WET GANGRENE Wet gangrene occurs in naturally moist tissue and organs such as the mouth, bowel, lungs, cervix, and vulva. Bedsores occurring on body parts such as the sacrum, buttocks and heels (not in “moist” areas) are also categorized as wet gangrene infections.

15 WET GANGERNE In wet gangrene, the tissue is infected by microorganisms, which cause tissue to swell and emit a fawol order. Wet gangrene usually develops rapidly due to blockage of venous and/or arterial blood flow. The affected part is saturated with stagnant blood which promotes the rapid growth of bacteria.

17 WET GANGRENE The toxic products formed by bacteria are absorbed causing systemic manifestation of bacteria and finally death. The affected part is soft, putrid, rotten and dark. The darkness in wet gangrene occurs due to the same mechanism as in dry gangrene.

21 GAS GANGRENE Gas gangrene is a bacterial infection that produces gas within tissues. It is a N deadly N form of gangrene usually caused by bacteria. Infection spreads rapidly as the gases produced by bacteria expand and effect healthy tissue.

23 GAS GANGRENE These toxins destroy nearby tissue, generating gas at the same time. Gas gangrene can cause necrosis, gas production, and sepsis. Progression to toxemia and shock is often very rapid. Because of its ability to quickly spread to surrounding tissues, gas gangrene should be treated as a medical emergency.

28 SPECIFIC GANGRENES Noma is a gangrene of the face.
Necrotizing fasciitis affects the deeper layers of the skin. Fournier gangrene usually affects the male genitals.

29 NOMA Is a gangrenous disease leading to tissue destruction of the face, especially the mouth and cheek. Risk factors include severe protein mal nutrition and unsanitary conditions.

32 NECROTIZING FASCIITIS
Commonly known as flesh-eating disease or flesh-eating bacteria. Rare infection of the deeper layers of skin and easily spread within the subcutaneous tissue

36 FOURNIER GANGRENE A type of necrotizing infection usually affecting the male genitals. In the majority of cases it is a mixed infection caused by both aerobic and anaerobic bacteria

40 TREATMENT As early as 1028 fly maggots were commonly used prevent or arrest necrotic spread. Some species of maggots consume only dead flesh, leaving nearby living tissue unaffected. This practice largely died out after the introduction of antibiotics. Maggot therapy has regained some credibility and is sometimes employed with great efficacy in cases of chronic tissue necrosis.

43 TREATMENT Usually surgical with amputation necessary in many cases.
Antibiotics alone are not effective because they do not penetrate ischemic muscles sufficiently.

44 TREATMENT The best treatment for gangrene is revascularization A.K.A. the restoration of blood flow to the affected area. Can reverse some of the effects of necrosis and allow healing. The method of treatment is generally determined depending on location of affected tissue and extent of tissue loss. 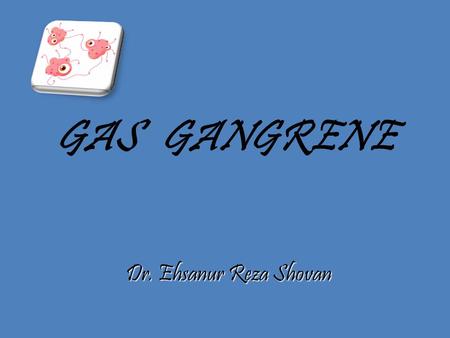 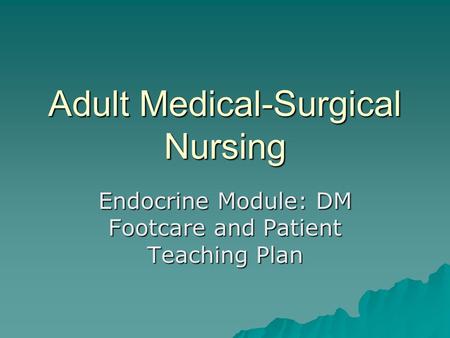 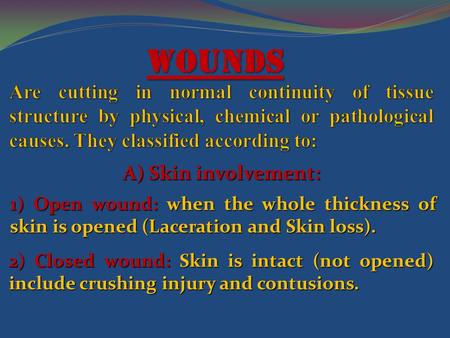 2) Closed wound: Skin is intact (not opened) include crushing injury and contusions. Wounds A) Skin involvement: 1) Open wound: when the whole thickness. 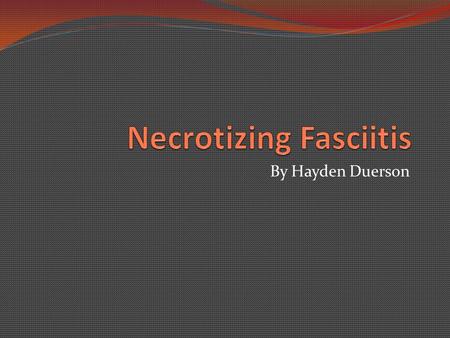 By Hayden Duerson. A quick overview Necrotizing Fasciitis is a bacterial infection in which the bacteria kill the skin and underlying muscle and connective. 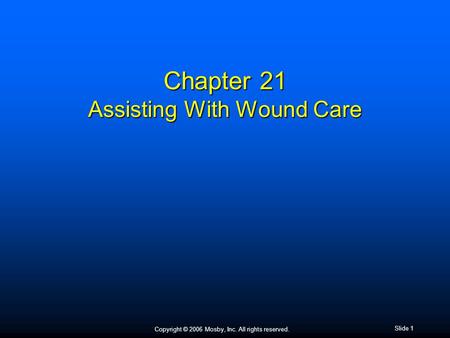 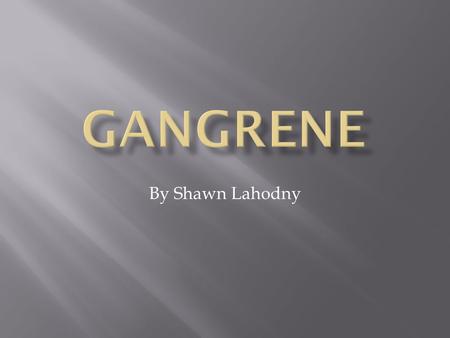 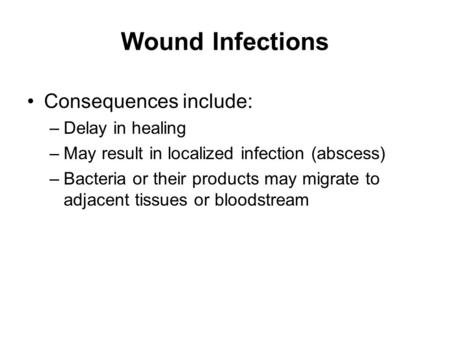 Consequences include: –Delay in healing –May result in localized infection (abscess) –Bacteria or their products may migrate to adjacent tissues or bloodstream. 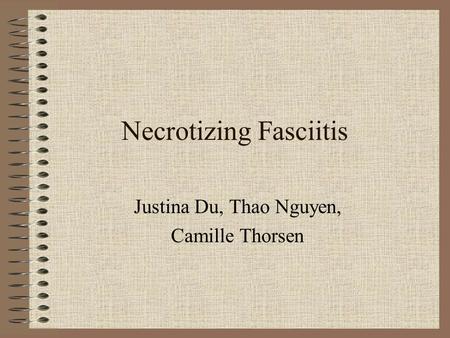 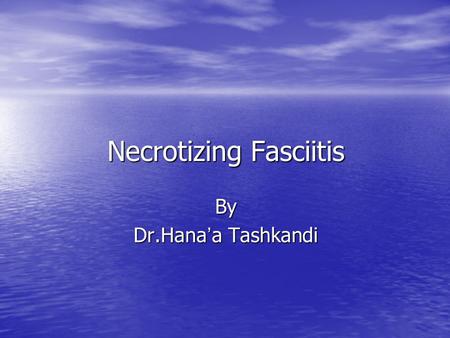 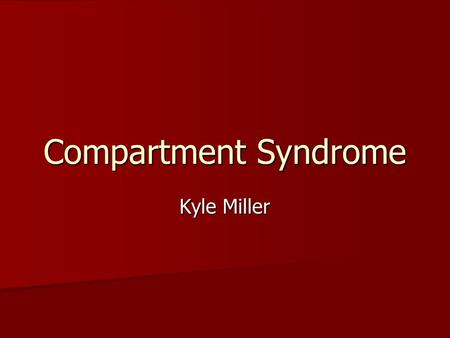 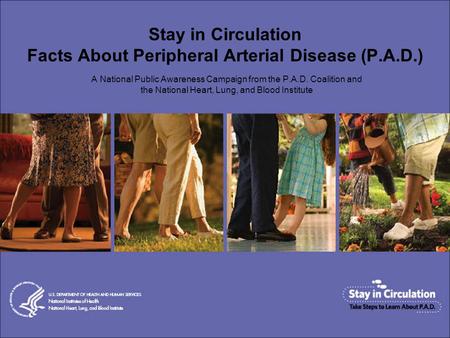 Stay in Circulation Facts About Peripheral Arterial Disease (P.A.D.) A National Public Awareness Campaign from the P.A.D. Coalition and the National Heart, 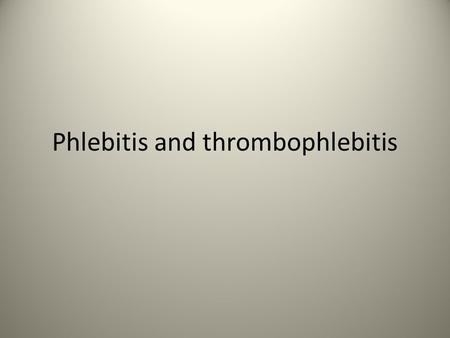 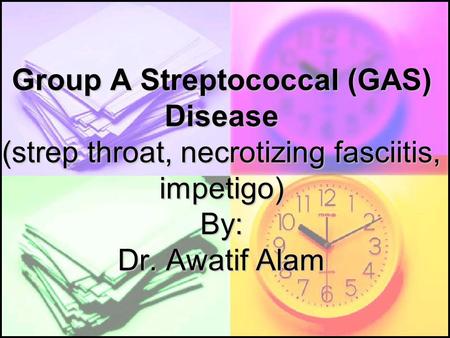 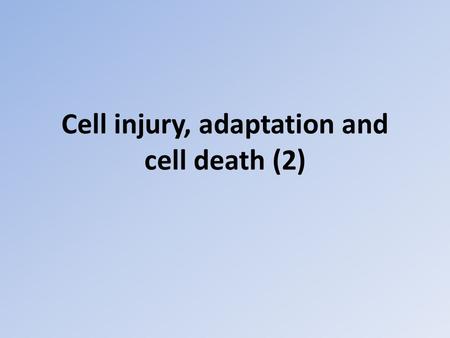 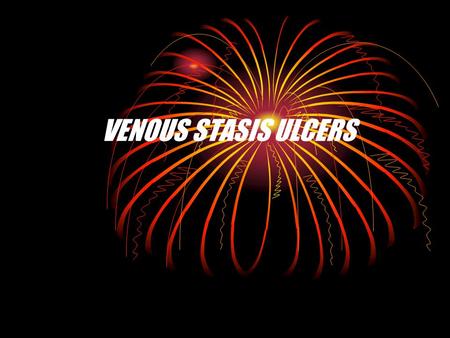 VENOUS STASIS ULCERS. Venous stasis ulcer: occurs from chronic deep vein insufficiency and stasis of blood in the venous system of the legs An open, necrotic. 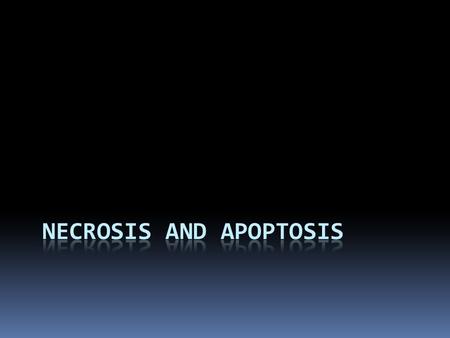 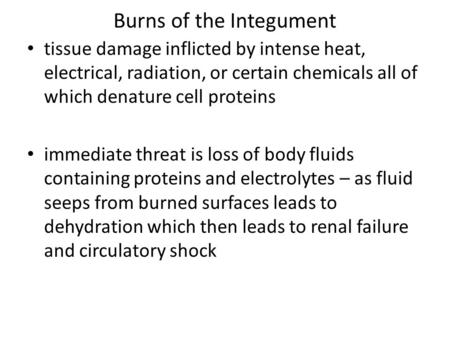 Burns of the Integument tissue damage inflicted by intense heat, electrical, radiation, or certain chemicals all of which denature cell proteins immediate. 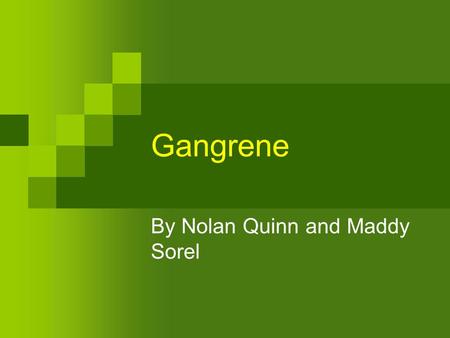 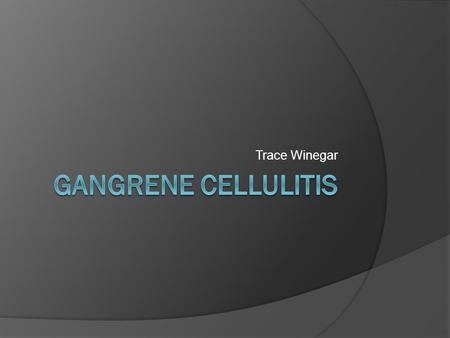 Trace Winegar. What is Gangrene?  Two main types: dry, and wet In both types of gangrene all tissue is destroyed  Gangrene occurs when tissue dies because. 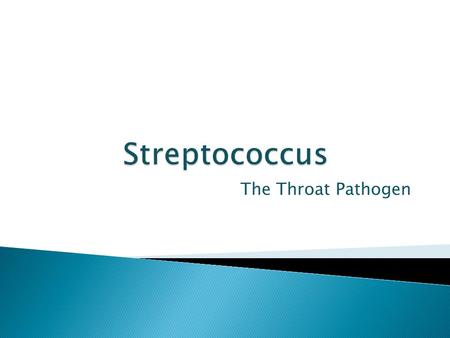