7 Manner of Articulation: Stops and Nasals
All consonants are produced by restriction of airflow Manner of Articulation; how the restriction is produced: complete or partial stoppage A stop is a consonant in which airflow is completely blocked for a short time English has voiced stops like [b], [d], and [g] as well as unvoiced stops like [p], [t], and [k]. Stops are also called plosives Nasal sounds [n], [m], and [ng] are made by lowering the velum and allowing air to pass into the nasal cavity

8 Fricatives Fricatives, airflow is constricted but not cut off completely. The turbulent airflow that results from the constriction produces a characteristic “hissing” sound. The English labiodental fricatives [f] and [v] are produced by pressing the lower lip against the upper teeth, allowing a restricted airflow between the upper teeth. The dental fricatives [th] and [dh] allow air to flow around the tongue between the teeth. The alveolar fricatives [s] and [z] are produced with the tongue against the alveolar ridge, forcing air over the edge of the teeth. In the palato-alveolar fricatives [sh] and [zh] the tongue is at the back of the alveolar ridge forcing air through a groove formed in the tongue.

9 Affricates, Laterals/Liquids and Taps/Flaps
Affricates are stops followed immediately by fricatives English [ch] (chicken); Marathi chaa (e.g., gharaachaa; of the house) Lateral or Liquids: tip of the tongue up against the alveolar ridge or the teeth, with one or both sides of the tongue lowered to allow air to flow over it [l] (learn) Tap or flap: quick motion of the tongue against the alveolar ridge [dx] (IPA [R]) The consonant in the middle of the word lotus ([l ow dx ax s]) is a tap in most dialects of American English speakers of many UK dialects would use a [t] instead of a tap in this word.

15 Basic of syllables “Syllable is a unit of spoken language consisting of a single uninterrupted sound formed generally by a Vowel and preceded or followed by one or more consonants.” Vowels are the heart of a syllable (Most Sonorous Element) (svayam raajate iti svaraH) Consonants act as sounds attached to vowels.

16 Syllable structure A syllable consists of 3 major parts:-
Onset (C) Nucleus (V) Coda (C) Vowels sit in the Nucleus of a syllable Consonants may get attached as Onset or Coda. Basic structure - CV

19 Introduction to sonority theory
“The Sonority of a sound is its loudness relative to other sounds with the same length, stress and speech.” Some sounds are more sonorous Words in a language can be divided into syllables Sonority theory distinguishes syllables on the basis of sounds.

22 Sonority theory & syllables
“A Syllable is a cluster of sonority, defined by a sonority peak acting as a structural magnet to the surrounding lower sonority elements.” Represented as waves of sonority or Sonority Profile of that syllable Nucleus Onset Coda

23 Sonority sequencing principle
“The Sonority Profile of a syllable must rise until its Peak(Nucleus), and then fall.” Peak (Nucleus) Onset Coda

26 Syllable Structure: a more detailed look
Count of no. of syllables in a word is roughly/intuitively the no. of vocalic segments in a word. Thus, presence of a vowel is an obligatory element in the structure of a syllable. This vowel is called “nucleus”. Basic Configuration: (C)V(C). Part of syllable preceding the nucleus is called the onset. Elements coming after the nucleus are called the coda. Nucleus and coda together are referred to as the rhyme. S ≡ Syllable, O ≡ Onset R ≡ Rhyme, N ≡ Nucleus Co ≡ Coda

30 Syllabification: Determining Syllable Boundaries
Given a string of syllables (word), what is the coda of one and the onset of another? In a sequence such as VCV, where V is any vowel and C is any consonant, is the medial C the coda of the first syllable (VC.V) or the onset of the second syllable (V.CV)? To determine the correct groupings, there are some rules, two of them being the most important and significant: Maximal Onset Principle, Sonority Hierarchy

31 Discussion on the assignment

35 The tasks First obtain the Carnegie Mellon University's Pronouncing Dictionary Train and Test the following Statistical Machine Learning Algorithms HMM - For HMM you can use either Natural Language Toolkit or you can use GIZA++ with MOSES.

36 Tasks (cntd) Report all the results using 5-fold cross Validation
Compare all the results obtained in the previous steps in terms of Precision Recall F-Score Finally do a detailed error analysis. 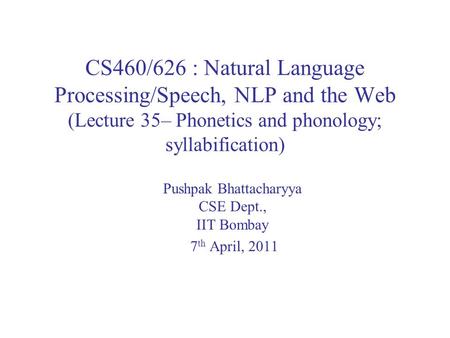 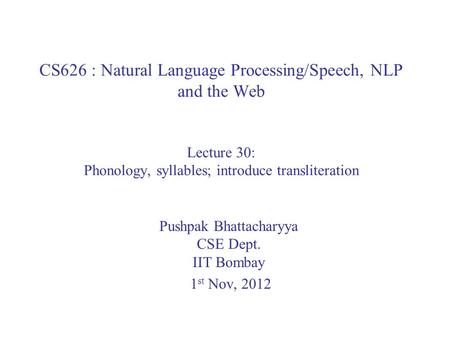 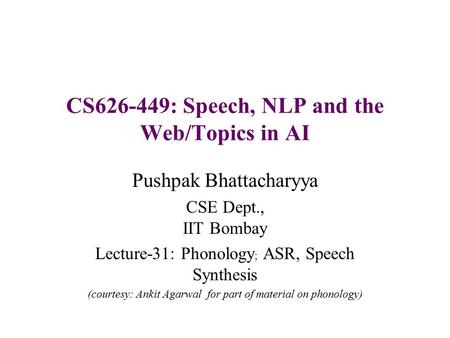