Presentation on theme: "Money: definition Money is the stock of assets that can be readily used to make transactions."— Presentation transcript:

0 Money and Inflation CHAPTER FOUR
I’ve included a graph that unfolds over slides that tells the same story as Figure 4-1 on p.86 of the text. If you prefer to show Figure 4-1, you can “hide” slides and “unhide” slide 26.

1 Money: definition Money is the stock of assets that can be readily used to make transactions.

2 Money: functions medium of exchange we use it to buy stuff
store of value transfers purchasing power from the present to the future unit of account the common unit by which everyone measures prices and values If your students have taken principles of economics, they will probably be familiar with the material on this slide. It might be worthwhile, though, to take an extra moment to be sure that students understand that the definition of store of value (an item that transfers purchasing power from the present to the future) simply means that money retains its value over time, so you need not spend all your money as soon as you receive it. The idea should be familiar, even though Greg’s wording is a bit more sophisticated than most other texts.

3 Money: types fiat money commodity money has no intrinsic value
example: the paper currency we use commodity money has intrinsic value examples: gold coins, cigarettes in P.O.W. camps, stone wheels up to 12 feet (3.6 meters) in diameter (Yap) Again, this material should be review for most students. Note: Many students have seen the film The Shawshank Redemption starring Tim Robbins and Morgan Freeman. Most of this film takes place in a prison. The prisoners have an informal “underground economy” in which cigarettes are used as money, even by prisoners who don’t smoke. Students who have seen the film will better understand “commodity money” if you mention this example. Also, the textbook (p.78) has a case study on cigarettes being used as money in POW camps during WWII.

6 The Quantity Theory of Money
A simple theory linking the inflation rate to the growth rate of the money supply. Begins with a concept called “velocity”…

11 Money demand and the quantity equation
M/P = real money balances, the purchasing power of the money supply. A simple money demand function: (M/P )d = k Y where k = how much money people wish to hold for each dollar of income (k is exogenous)

14 The Quantity Theory of Money, cont.
How the price level is determined: With V constant, the money supply determines nominal GDP (P Y ) Real GDP is determined by the economy’s supplies of K and L and the production function (chap 3) The price level is P = (nominal GDP)/(real GDP) It’s worthwhile to underscore the order (logical, though not necessarily chronological order) in which variables are determined in this model (as well as the other models students will learn in this course). First, real GDP is already determined outside this model (real GDP is determined by the model from chapter 3, which was completely independent of the money supply or velocity or other nominal variables). Second, the Quantity Theory of money determines nominal GDP. Third, the values of nominal GDP (PY) and real GDP (Y) together determine P (as a ratio of PY to Y). If, on an exam or homework problem, students forget the logical order in which endogenous variables are determined --- or on a more fundamental level, forget which variables are endogenous and which are exogenous --- then they are much less likely to earn the high grades that most of them desire. [Note the similarity between the way P is determined and the definition of the GDP deflator from chapter 2.]

15 The Quantity Theory of Money, cont.
The quantity equation in growth rates:

16 The Quantity Theory of Money, cont.
Let  (Greek letter “pi”) denote the inflation rate: The result from the preceding slide was: Solve this result for  to get

17 The Quantity Theory of Money, cont.
Normal economic growth requires a certain amount of money supply growth to facilitate the growth in transactions. Money growth in excess of this amount leads to inflation. The text on this slide is an intuitive way to understand the equation. For students that are more comfortable with concrete numerical examples, you could offer the following: Suppose real GDP is growing by 3% per year over the long run. Thus, production, income, and spending are all growing by 3%. This means that the volume of transactions will be growing as well. The central bank can achieve zero inflation (on average over the long run) simply by setting the growth rate of the money supply at 3%, in which case exactly enough new money is being supplied to facilitate the growth in transactions.

19 International data on inflation and money growth
Figure 4-2 from p.87 of the text.

20 U.S. data on inflation and money growth
Figure 4-1 from p.86. We see here that the positive relationship between money growth and inflation implied by the Quantity Theory holds up over time as well as across countries.

21 U.S. Inflation & Money Growth, 1960-2003
This graph unfolds over this and the next three slides. Its purpose is to show that the long-run trends in inflation and money growth are highly correlated, even though the short-run movements aren’t.

24 U.S. inflation and nominal interest rates, since 1954
Inflation rate An updated replica of Figure 4-3 on p.90 of the text.

25 Inflation and nominal interest rates across countries
Figure 4-4 on p.91

26 Ex ante and ex post inflation
Ex ante variable: e = expected inflation rate Ex post variable:  = actual inflation rate (not known until after it has occurred) When lender and borrower agree on a nominal interest rate, they do not know what the rate of inflation is going to be, hence… Modified Fisher Effect: i=r+ e

32 Why is inflation bad? Discussion Question
Many of the social costs of inflation are not hard to figure out, if students “think like an economist.” Suggestion: After you pose the question, don’t immediately ask for students to volunteer their answers. Instead, tell them to think about the question for a moment, jot down their answers, and THEN ask for volunteers. You will get more participation (quantity & quality) this way, especially from students who don’t consider themselves fast thinkers. After presenting the following slides (which describe the costs), see how many of the costs presented here were anticipated by the students’ responses to the question on this slide.

33 A common misperception
Common misperception: inflation reduces real wages This is true only in the short run, when nominal wages are fixed by contracts. In the long run, the real wage is determined by labor supply and the marginal product of labor, not the price level or inflation rate. Consider the data…

41 Chapter summary Classical dichotomy
In classical theory, money is neutral--does not affect real variables. So, we can study how real variables are determined w/o reference to nominal ones. Then, eq’m in money market determines price level and all nominal variables. Most economists believe the economy works this way in the long run.

Download ppt "Money: definition Money is the stock of assets that can be readily used to make transactions." 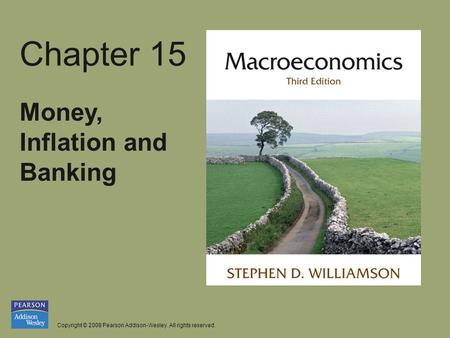 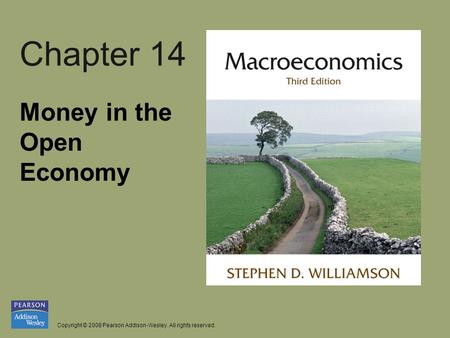 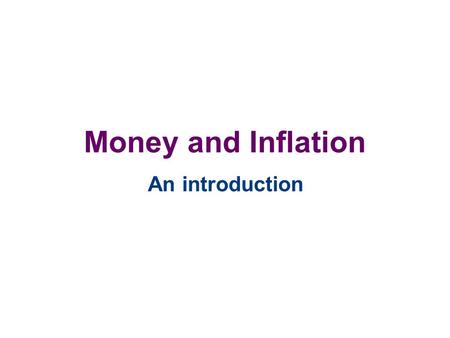 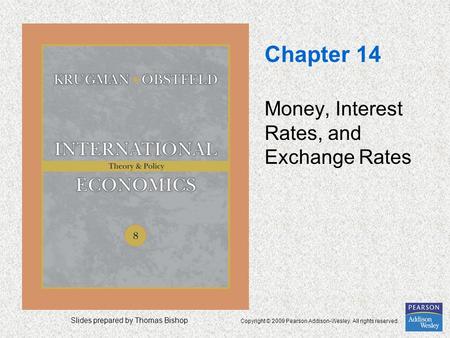 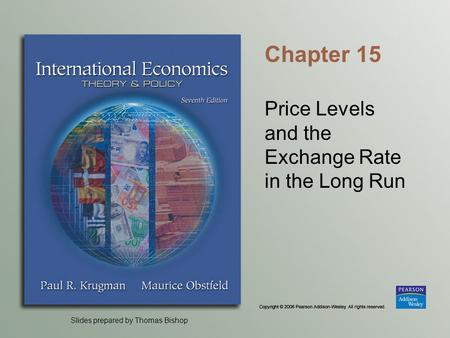 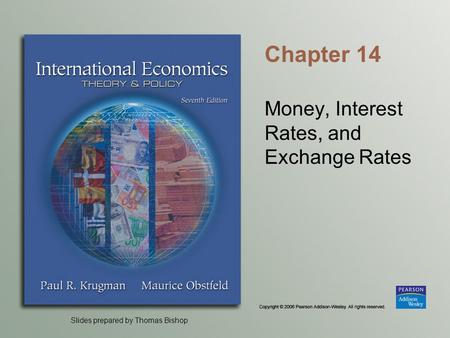 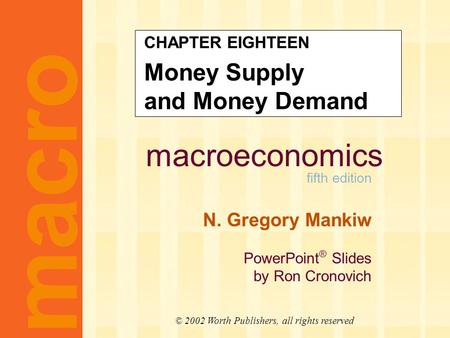 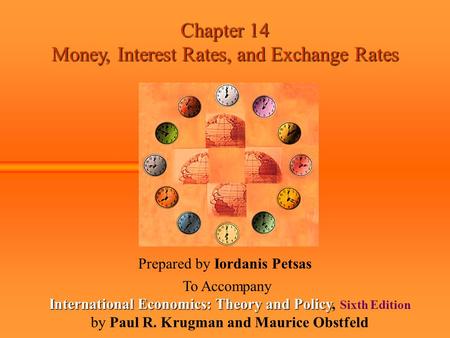 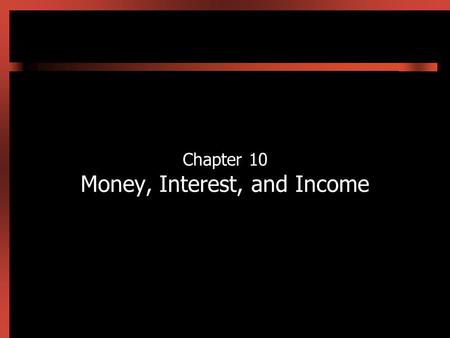 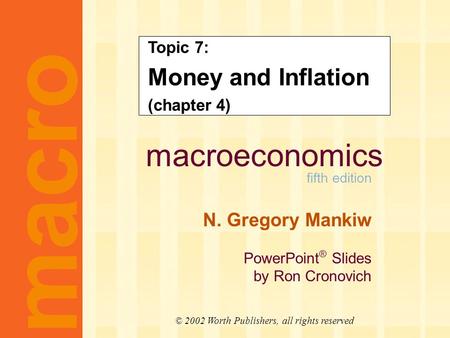 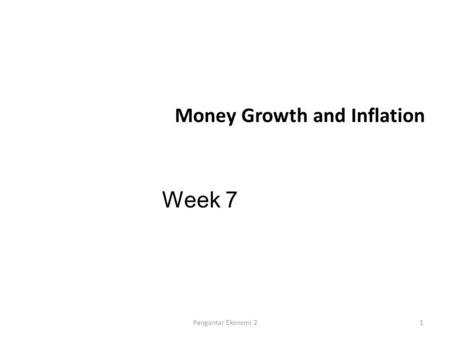 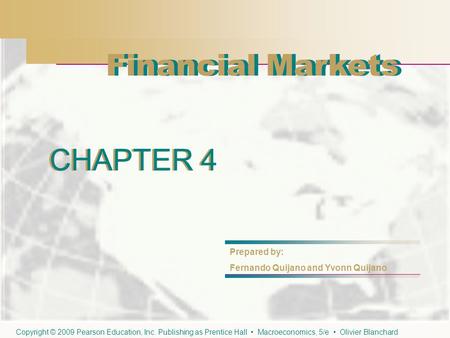 4-1 The Demand for Money Money, which you can use for transactions, pays no interest. There are two types of money: currency, coins and bills, and checkable. 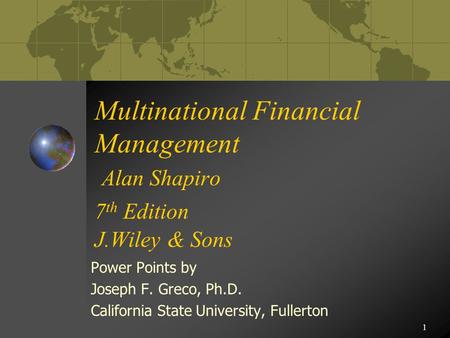