5 Intranasal Steroids CONTRAINDICATIONS AND PRECAUTIONS
Those hypersensitive to steroids should not take INS. INS are pregnancy category C and should be used only when the benefit outweighs the risk to the fetus. INS are used cautiously in patients taking systemic steroids. Some studies suggest there may be a slowing in growth rate of children using these products for extended periods INTERACTIONS When cimetidine (used to reduce stomach acid) is taken with budesonide, the INS is less effective.

6 Histamine Histamine is produced in response to an allergic reaction or tissue injury. The release of histamine produces an inflammatory response. Dilation of small arterioles results in localized redness. An increase in the permeability of small blood vessels promotes an escape of fluid from these blood vessels into the surrounding tissues, which produces localized swelling. Histamine is also released from mast cells in allergic reactions or hypersensitivity reactions, such as anaphylactic shock.

15 Decongestants: Adverse Reactions and Contraindications
When used topically in prescribed doses, there are usually minimal systemic effects in most individuals. On occasion, nasal burning, stinging, and dryness may be seen. Use of oral decongestants may result in the following adverse reactions: Tachycardia and other cardiac arrhythmias; nervousness; restlessness; insomnia; blurred vision; nausea; vomiting

21 Antitussives, Expectorants, and Mucolytics:
PRECAUTIONS Antitussives are given with caution to patients with a persistent or chronic cough or a cough accompanied by excessive secretions, a high fever, rash, persistent headache, and nausea or vomiting. Antitussives containing codeine are used with caution during pregnancy (pregnancy category C, in patients with COPD, acute asthmatic attack, pre-existing respiratory disorders, acute abdominal conditions, head injury, increased intracranial pressure, convulsive disorders, hepatic or renal impairment, and prostatic hypertrophy. Expectorants are used cautiously during pregnancy and lactation; in patients with persistent cough, severe respiratory insufficiency, or asthma; and in older adults or debilitated patients.

22 Nursing Process: Assessment
Preadministration assessment: The assessments the nurse may perform: Assess the involved areas (eyes, nose, and upper and lower respiratory tract) if the patient is receiving an antihistamine for the relief of allergy symptoms If promethazine (Phenergan) is used with an opioid to enhance the effects and reduce the dosage of the opioid, take the patient’s blood pressure, pulse, and respiratory rate before giving the drug

23 Nursing Process: Assessment (cont.)
Ongoing assessment: Observe the patient for the expected effects of the antihistamine and for adverse reactions Antihistamine is given for a serious situation: assess the patient at frequent intervals until the symptoms appear relieved and for about 24 hours after the incident

26 Nursing Process: Planning
The expected outcomes for the patient depend on the reason for administration of the antihistamine but may include: Optimal response to therapy Supporting of patient needs related to managing adverse reactions Understanding of and compliance with the prescribed treatment regimen

27 Nursing Process: Planning
Expected outcomes for the patients include: Optimal response to therapy Support of patient needs related to the management of adverse reactions Understanding of and compliance with the prescribed treatment regimen

28 Nursing Process: Implementation (cont.)
Monitoring and managing patient needs: Impaired oral mucous membranes: Dryness of the mouth, nose, and throat: Offer the patient frequent sips of water or ice chips to relieve the symptoms Risk of injury: Assist the patient with ambulation Place the call light within easy reach and instruct to call before attempting to get out of bed and ambulating

29 Nursing Process: Implementation
Loratadine or other rapidly disintegrating tablets can be administered with or without water and are placed on the tongue, where the tablet dissolves almost instantly. Fexofenadine is not administered within 2 hours of an antacid. Chewing benzonatate tablets may result in a local anesthetic effect (oropharyngeal anesthesia) with possible choking as a result. Acetylcysteine has a distinctive, disagreeable odor. The medication may smell like “rotten eggs.” Although this odor may be nauseating, the smell dissipates quickly.

32 Nursing Process: Implementation (cont.)
Educating the patient and family: The nurse should include the following points in the teaching plan: Use this product as directed by the primary health care provider or on the container label Understand that overuse of topical nasal decongestants can make the symptoms worse, causing rebound congestion If using a spray, do not allow the tip of the container to touch the nasal mucosa and do not share the container with anyone

33 Nursing Process: Evaluation
Mucous membranes are moist and intact No injury is reported The patient and family understand the drug regimen

34 Nursing Process: Evaluation (cont.)
The patient maintains effective breathing pattern The therapeutic effect is achieved The patient demonstrates an understanding of and compliance with the drug regimen

35 Question Is the following statement true or false?
Cough, cold, congestion, and allergies are common problems in the upper respiratory system.

37 Question Is the following statement true or false?
Expectorants or mucolytics are used to reduce inflammation.

38 Answer False Antihistamines are used to reduce inflammation; decongestants reduce edema and swelling; antitussives are used to eliminate cough. When congestion produces secretions in either the respiratory passages or the lungs, expectorants or mucolytics are used, respectively. 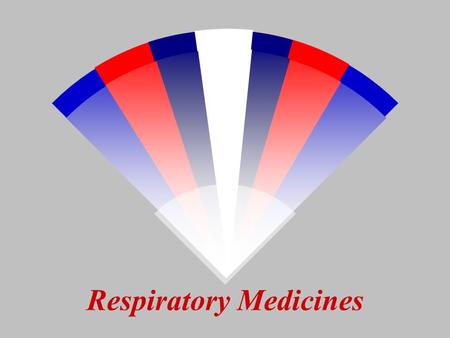 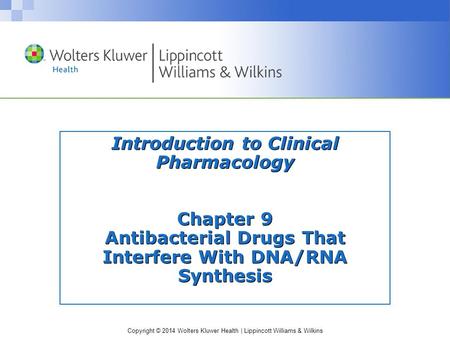 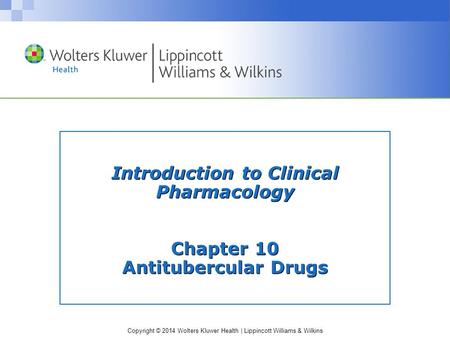 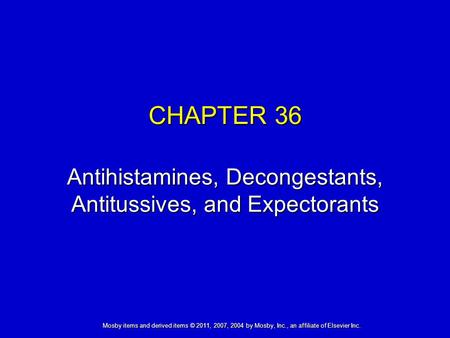 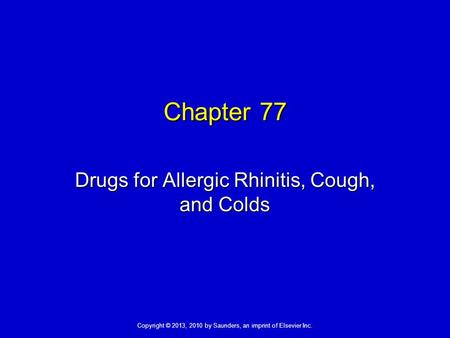 Copyright © 2013, 2010 by Saunders, an imprint of Elsevier Inc. Chapter 77 Drugs for Allergic Rhinitis, Cough, and Colds. 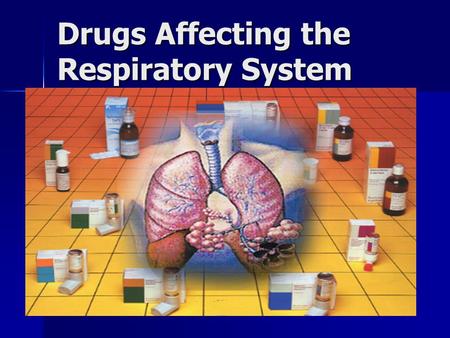 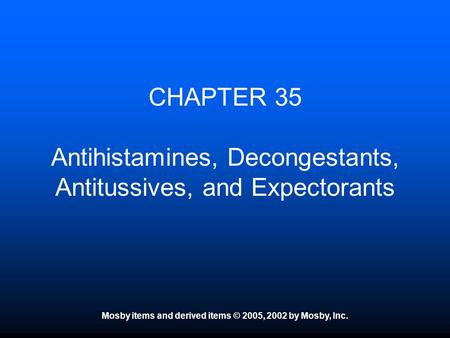 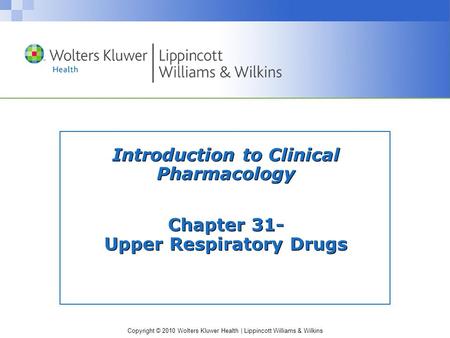 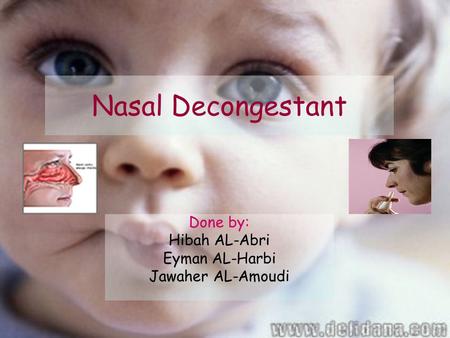 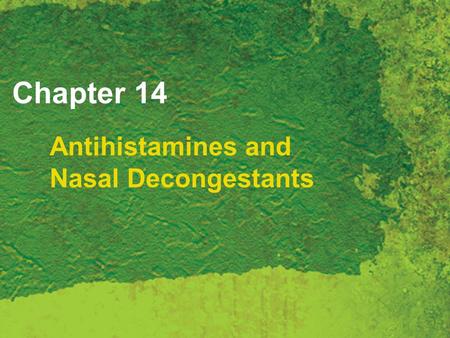 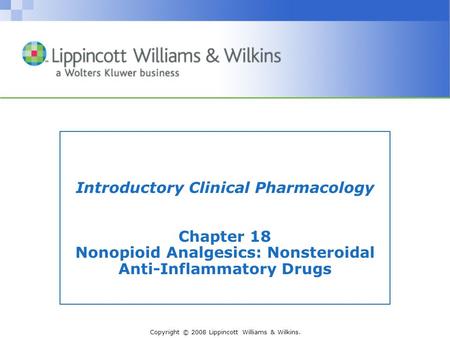 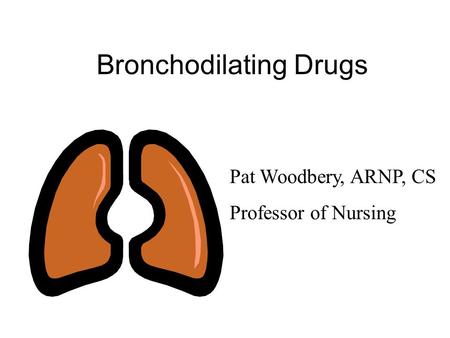 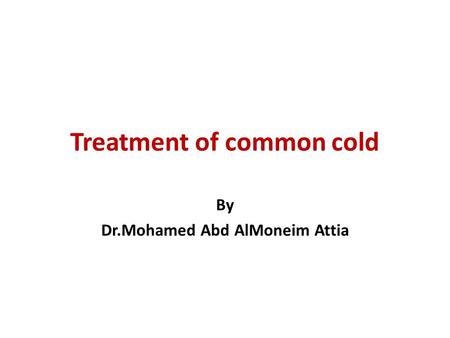 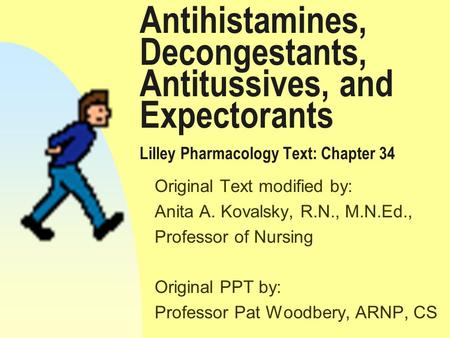 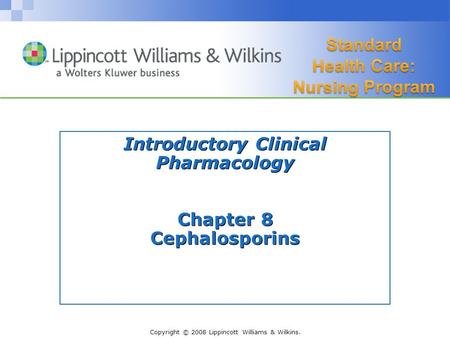 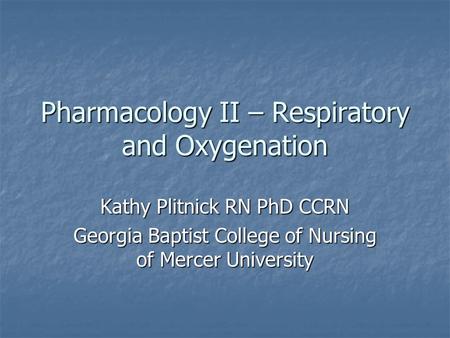 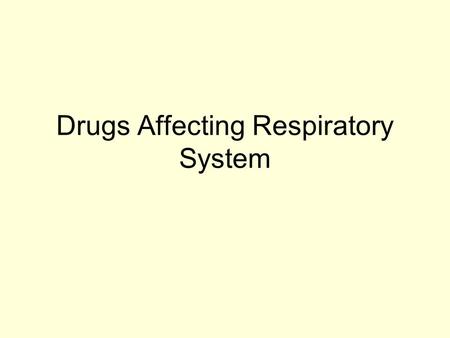 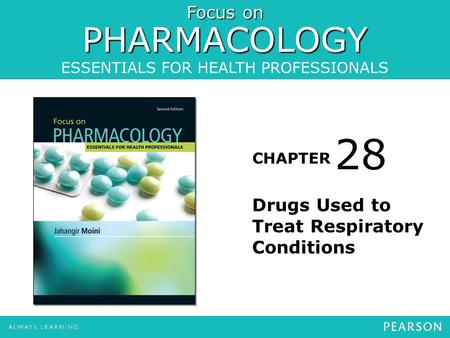 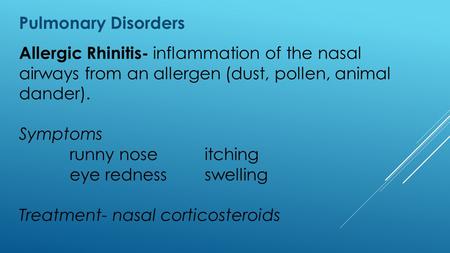