2 Celebrating the European Union: A Half Century of Change and Progress
Since the creation of the EU half a century ago, Europe has enjoyed the longest period of peace in its history. European political integration is unprecedented in history. EU enlargement has helped overcome the division of Europe – contributing to peace, prosperity, and stability across the continent. A single market and a common currency conditions for companies and consumers. European Union United in diversity

3 What is the European Union?
Shared values: liberty, democracy, respect for human rights and fundamental freedoms, and the rule of law. Largest economic body in the world. A unique institution – Member States voluntarily cede national sovereignty in many areas to carry out common policies and governance. Not a super-state to replace existing states, nor just an organization for international cooperation. World’s largest & most open market for goods and commodities from developing countries. 27 Member States Combined population of EU Member States 490 million 7 Percent of world’s population Percent of global GDP 30 Percent of combined worldwide Official Development Assistance 55

4 Regional Integration (Theory)
􀂄 From Free Trade Area: the elimination of tariffs for goods and services within region (NAFTA) 􀂄 via Customs Union: an FTA with a common external tariff (EEC) 􀂄 to Single Market/Economic Union: eliminating all tariff and non-tariff barriers Freedom of goods, services, labor and capital “Harmonization” of regulation May also have common currency (euro)

7 European Coal and Steel Community
1951: European Coal and Steel Community In the aftermath of World War II, the aim was to secure peace among Europe’s victorious and vanquished nations and bring them together as equals, cooperating within shared institutions. Based on a plan by French Foreign Minister Robert Schuman. Six founding countries – Belgium, the Federal Republic of Germany, France, Italy, Luxembourg and the Netherlands – signed a treaty to run heavy industries (coal and steel) under common management. Jean Monnet and other leaders with the first “European” ingot of steel

8 1957: Treaty of Rome The six founding countries expanded cooperation to other economic sectors, creating the European Economic Community (EEC) – or “common market.” As a result, people, goods, services, and capital today move freely across the Union. Britain left out, formed EFTA instead 1960s: Common Agricultural Policy Signing of the Treaty of Rome

17 The €uro With German reunification, EMU presents opportunity to tie a unified Germany to the EU by creating common ‘bandwidth’ of currency fluctuations & deciding which countries can take part (by 1998) (Stage 1) Jan 1, 1999 =launch of currency at $ and ECB creation (Stage 2) Final money intro/circulation on Jan 1, 2002 (Stage 3) Reduces cost of business/transaction costs, reduces exchange rate risks, but also reduces national monetary flexibility The euro is as stable as the best-performing currencies previously used in the euro area countries (currently: too high, making EU products expensive as compared to US) €

19 The euro was introduced in 1999
European Central Bank The European Central Bank (ECB) is the central bank for Europe's single currency, the euro. The ECB’s main task is to maintain the euro's purchasing power and thus price stability in the euro area. The euro area comprises currently the 16 EU countries that have introduced the euro since 1999. The ECB operates independently from Member State governments (supervised by ECB board members from nat. central banks) The euro was introduced in 1999

21 A Dynamic Transatlantic Economy
EU and U.S. together account for 40% of total global trade (more than $1.5 billion in transatlantic trade every day). The $3 trillion EU-U.S. transatlantic economy employs 14 million workers on both sides of the Atlantic. In 2005, Europe accounted for roughly two-thirds of total global investment flows into the U.S. – by far the most significant source of foreign investment in the U.S. economy. 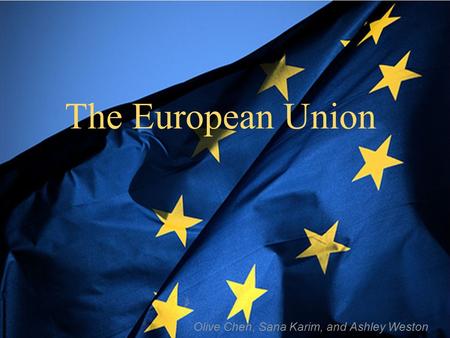 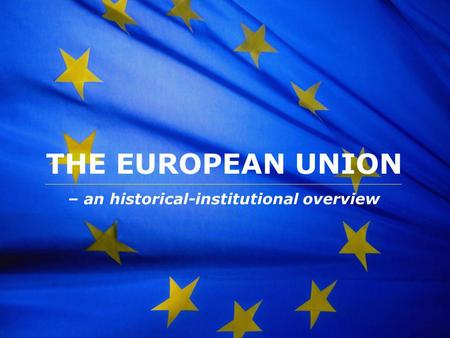 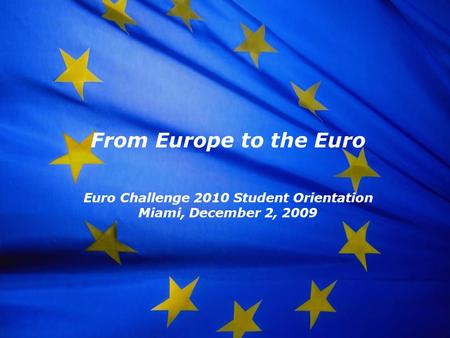 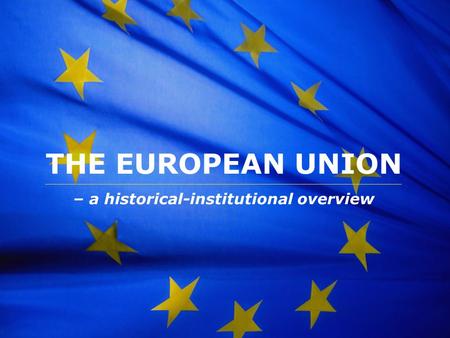 The European Union THE EUROPEAN UNION – a historical-institutional overview.