3 Software Testing Fundamentals
Software testing is a critical element of software quality assurance and represents the ultimate review of specification, design, and coding. Software testing demonstrates that software function appear to be working according to specifications and performance requirements. Testing Objectives: Myers [MYE79] states a number of rules that can serve well as testing objectives: - Testing is a process of executing a program with the intent of finding an error. - A good test case is one that has high probability of finding an undiscovered error. - A successful test is one that uncovers an as-yet undiscovered error. The major testing objective is to design tests that systematically uncover types of errors with minimum time and effort.

4 Software Testing Principles
Davids [DAV95] suggests a set of testing principles: - All tests should be traceable to customer requirements. - Tests should be planned long before testing begins. - The Pareto principle applies to software testing. - 80% of all errors uncovered during testing will likely be traceable to 20% of all program modules. - Testing should begin “in the small” and progress toward testing “in the large”. - Exhaustive testing is not possible. - To be most effective, testing should be conducted by an independent third party.

5 Software Testability According to James Bach:
Software testability is simply how easily a computer program can be tested. A set of program characteristics that lead to testable software: - Operability: “the better it works, the more efficiently it can be tested.” - Observability: “What you see is what you test.” - Controllability: “The better we can control the software, the more the testing can be automated and optimized.” - Decomposability: “By controlling the scope of testing, we can more quickly isolate problems and perform smarter retesting.” - Simplicity: “The less there is to test, the more quickly we can test it.” - Stability: “The fewer the changes, the fewer the disruptions to testing.” - Understandability:”The more information we have, the smarter we will test.”

7 White-Box Testing and Basis Path Testing
White-box testing, also known as glass-box testing. It is a test case design method that uses the control structure of the procedural design to derive test cases. Using white-box testing methods, we derive test cases that - Guarantee that all independent paths within a module have been exercised at least once. - Exercise all logical decisions one their true and false sides. - Execute all loops at their boundaries and within their operational bounds. - Exercise internal data structures to assure their validity. Basic path testing (a white-box testing technique): - First proposed by TomMcCabe [MCC76]. - Can be used to derive a logical complexity measure for a procedure design. - Used as a guide for defining a basis set of execution path. - Guarantee to execute every statement in the program at least one time.

9 Deriving Test Cases Step 1 : Using the design or code as a foundation, draw a corresponding flow graph. Step 2: Determine the cyclomatic complexity of the resultant flow graph. Step 3: Determine a basis set of linearly independent paths. For example, path 1: path 2: path 3: path 4: … path 5: Path 6: Step 4: Prepare test cases that will force execution of each path in the basis set. Path 1: test case: value (k) = valid input, where k < i defined below. value (i) = -999, where 2 <= I <= 100 expected results: correct average based on k values and proper totals.

12 Boundary Value Analysis
Boundary value analysis(BVA) - a test case design technique - complements to equivalence partition Objective: Boundary value analysis leads to a selection of test cases that exercise bounding values. Guidelines: - If an input condition specifies a range bounded by values a and b, test cases should be designed with value a and b, just above and below a and b. Example: Integer D with input condition [-3, 10], test values: -3, 10, 11, -2, 0 - If an input condition specifies a number values, test cases should be developed to exercise the minimum and maximum numbers. Values just above and below minimum and maximum are also tested. Example: Enumerate data E with input condition: {3, 5, 100, 102} test values: 3, 102, -1, 200, 5 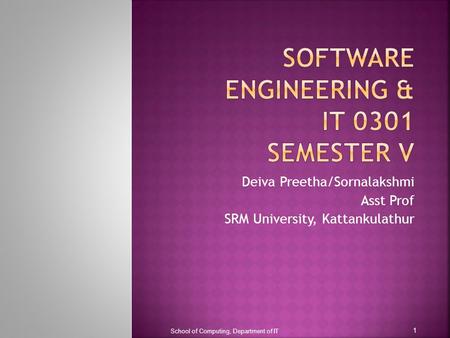 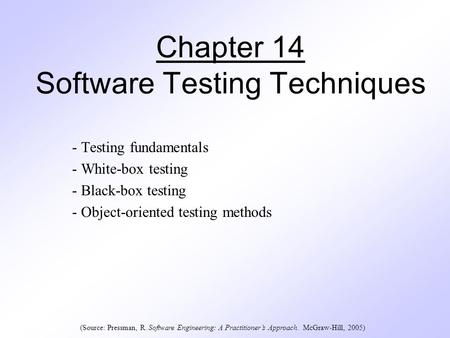 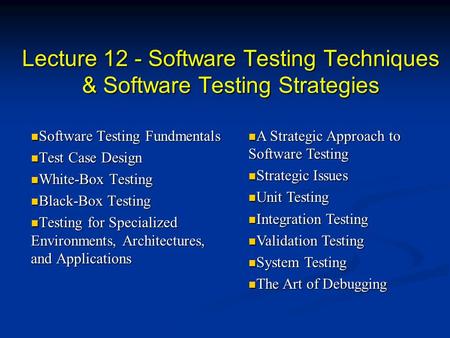 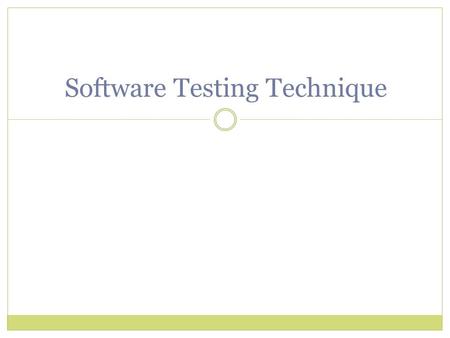 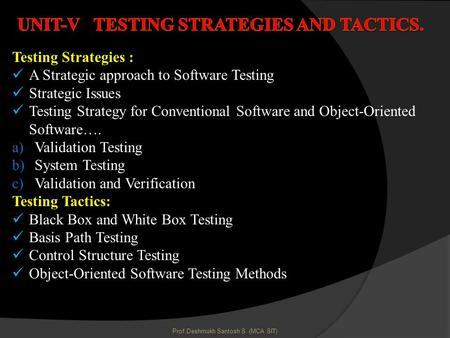 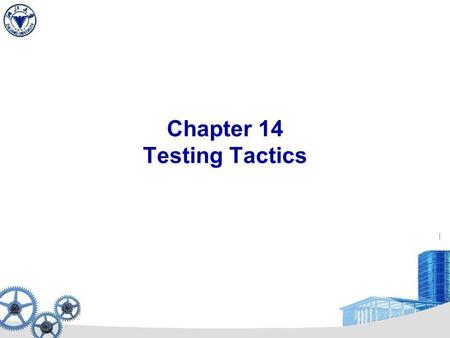 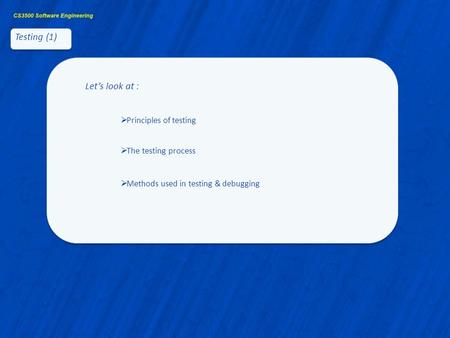 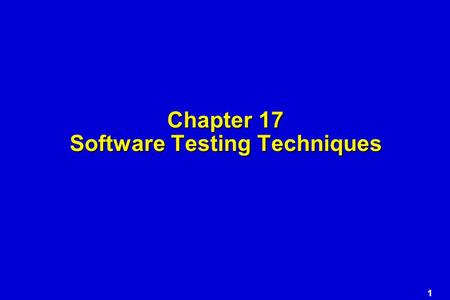 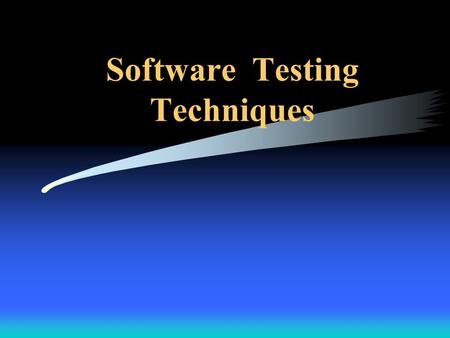 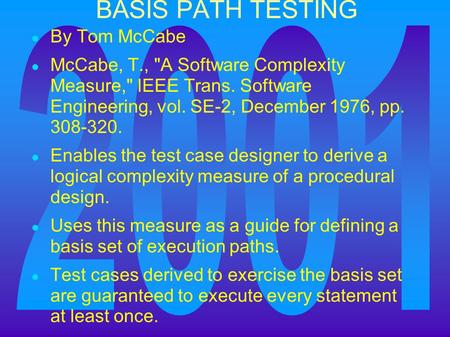 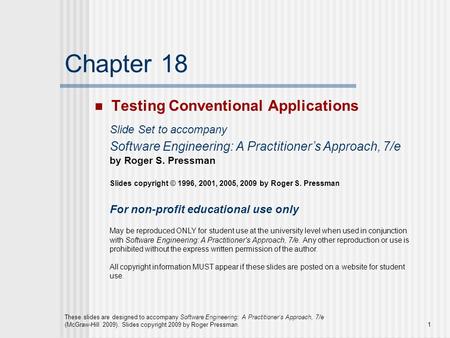 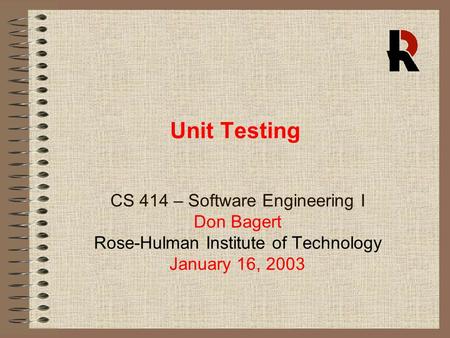 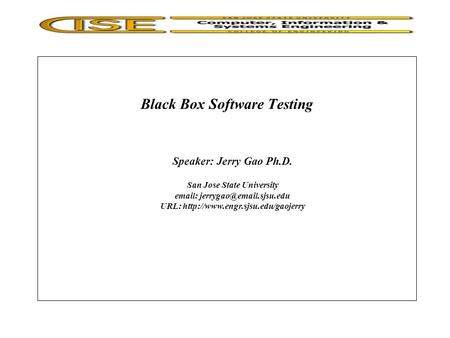 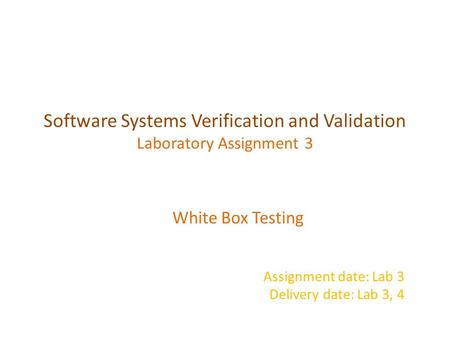 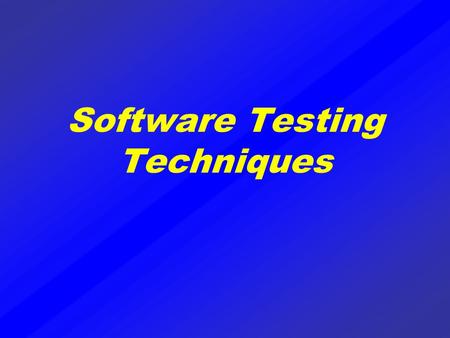 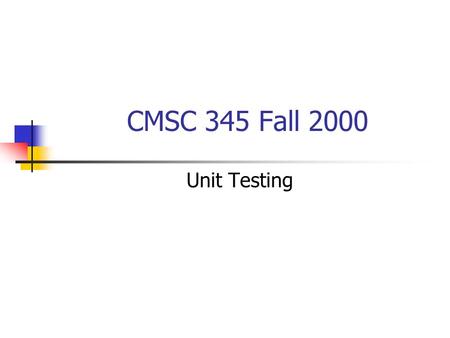