1 Card Stacking Card-stacking means giving the positive side for your own point of view, but none of the positive points for your opponents position. Card-stacking is not only a common advertising strategy, but also one that young people themselves use frequently as they argue for something they want. The term card-stacking gives supporting reasons for your own point-of-view, and few or none of the reasons that support the opposite point-of-view. You will see politicians use this technique in a speech before an election to win favor or votes. Editorials in a newspaper are also an example of propaganda that uses the card-stacking technique.

2 Get On the Bandwagon! A bandwagon is a highly decorated parade float crowded with enthusiastic participants in an event (for example, clowns, musicians, political figures). The bandwagon technique plays on the fears people have of being left out. (Uses lots of emotions!) This technique suggests that everyone is doing/buying something, so dont be left out. (Statistics-high 99% are used) The theme of this type of device is:Everybodys doing it; join the crowd; dont be left out. Some ads that use the bandwagon device show biases. A bias is an attitude that always favors one way of feeling or acting over any other. (one-sided or STEREOTYPES of certain groups)

3 Testimonials: The Famous-People Technique A testimonial is a statement of support from a well-liked public figure- often an athlete or a film star. The testimonial technique is used in television commercials, magazine ads, internet ads, and some websites. Testimonials feature an authority who recommends a product or service. The authority may be a professional, such as a doctor, a celebrity or sports star, or even an ordinary person who vouches for the products value. This authority/person supporting the product or service is called thespokesperson for the product/service. The testimonials power of persuasion comes from the person selected to be the authority. The person selected for the ad must represent how the product will benefit you. This can be visual or written. All advertisements have a second, underlying message called a subtext. The subtext is never stated directly. The underlying message or subtext is suggested through images, music, and/or special effects that are used to construct the ad.

5 Plain Folks A Plain Folks technique is one in which the speaker presents him or herself as an Average Joe, a common person who can understand the buyers concerns. They seller attempts to appear All- American. The most important part of this technique is the sellers portrayal of themselves as someone who has had a similar experience to the buyer and knows why they may be cautious about buying their product. The buyer gives the seller a sense of trust and comfort, believing that the seller and the buyer share common goals and that they thus should agree with what products to purchase.

6 Glittering Generalities This propaganda technique provides glowing claims but nothing to back up the claims. For instance, This is the best car on the road. A generality is a vague (not very specific) word, phrase, or statement. Examples: better, best, good tasting, awesome, refreshing… A glittering generality is one that has a feel-good quality to it. 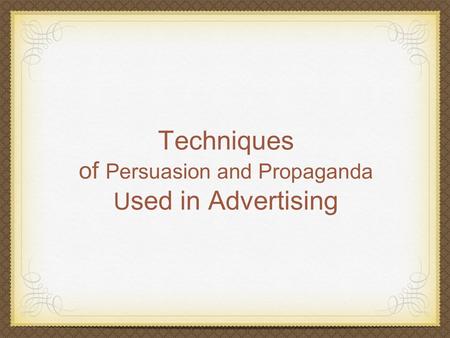 Techniques of Persuasion and Propaganda U sed in Advertising. 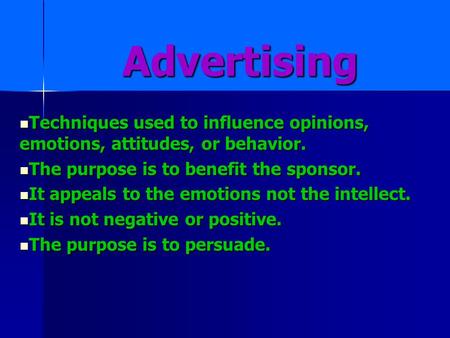