2 What is the IGCC? An Adoptable, Useable and Enforceable building code Intended to reduce the negative impacts of the built environment on the natural environment Addresses Conservation of: Natural resources Materials Energy Water Air & indoor environmental quality

3 Why is the ICC promoting its Green Construction Code when other options already exist ? The development of a code occurs when there is a clear need indicated from regulators and others in the building safety industry. In the case of the IGCC, there has been an increasing call for an actual code that is clear and enforceable. We have heard this not only from our members in local and state government, but from stakeholders across the spectrum. For example, architects want a code book that will guide their design activities just like the other I-Codes.

4 IGCC Context The IGCC is not a rating system, nor is it intended to replace them. The IGCC is code which is intended to be adopted on mandatory basis. Unlike most rating systems, the IGCC primarily consists of minimum mandatory requirements, just as other I- Codes. Because it is intended to apply to both private sector and government owned buildings– it raises the bar on sustainability for all commercial buildings – positioning the IGCC to achieve massive environmental benefits not possible with voluntary rating systems.

5 How does the development process work? The ICC Board created a Sustainable Building Technology Committee (SBTC) composed of 28 individuals from multiple sectors, to draft Public Version 1.0. The SBTC conducted open meetings around the U.S. between July 2009 and January 2010, creating IGCC Public Version 1.0 as a tool for jurisdictions wishing to develop a code based on the ICC process. In August of 2010, an IGCC public comment committee considered over 1,500 comments related to Public Version 1.0 at public hearings in Chicago, Illinois. The committees decisions were incorporated in Public Version 2.0.

7 Once the 2012 Code is issued, it will be revisited every three years along with the other I- Codes, through the two-hearing process used to update all of the I-Codes. How does the development process work?

8 Scope Will apply to traditional commercial and high-performance buildings. Consistent and coordinated with the ICC family of Codes & Standards. Applicable to the construction of buildings, structures, and systems, including alterations and additions. Will provide a new regulatory framework with customization features to allow jurisdictional options beyond IGCC baseline. Designed with leading recognized rating systems and standards in mind. Will provide criteria to measure compliance & drive green building into everyday practice. Commercial & High- Performance Buildings Integrated with I-Codes Option to Customize ASHRAE/USGBC/IES Standard 189.1 included as Jurisdictional Compliance Option Tied to Building Performance

9 Concepts Will use the model code approach that provides communities the ability to modify. Minimum & advanced levels of performance (green & high- performance buildings). Work as an overlay to the ICC Family of Codes. Written in mandatory language that provides a new regulatory framework.

10 Concepts ANSI/ASHRAE/USGBC/IES Standard 189.1 also is offered as a jurisdictional compliance option. The Standard is included with the IGCC. Adoption of the Standard occurs via the local jurisdiction adoption process. Providing the IGCC, including the189.1 option, allows the widest set of options to a jurisdiction, all under the umbrella of the IGCC.

14 Timing of the IGCC Initiative The IGCC initiative builds upon the good work of many organizations and advocates concerned with a more sustainable built environment. It is not designed to compete against, or minimize, the systems and standards that are already in place. We anticipate our code development process will utilize existing work as a resource. The timing of this activity is appropriate in the evolution of the sustainability efforts in the U.S. and around the world. Now that various approaches have been tested and implemented, we have a clearer picture as to what is required in a code. We also better understand how a code can be useful and why a code is necessary.

16 What is the difference between the IGCC and other systems and standards such as LEED, Green Globes, etc. ? The IGCC creates a regulatory framework for new and existing commercial and high- performance buildings. Rating systems are not written in the form of enforceable codes. IGCC will provide baseline benchmarks for sustainable building practices to raise the floor of green building while voluntary ratings systems like LEED will continue to push the envelope for developers who commission projects with sustainability characteristics above and beyond the baseline, thereby raising the ceiling.

17 How will the IGCC differ from a national or federal mandate? The IGCC will be a model code, requiring adoption by a governing jurisdiction before it becomes law. In this way, the model language can, if necessary, be adapted to address local conditions and allows for publicly elected legislative bodies to have the final voice in adoption. Many of the I-Codes are adopted without amendment at the state or local level; amended versions often take into account local weather and hazard conditions, regional approaches to building design and construction, and other factors.

18 How will the IGCC differ from other International Codes such as the International Building Code (IBC)? One of the values of the IGCC is that it will be designed to coordinate and integrate with existing I- Codes. The IGCC includes various levels for jurisdictions to apply unique green requirements to commercial buildings. The IGCC will not replace the IBC but rather can be adopted and used in conjunction with the adopted IBC, as well as all the other I-Codes.

19 Unlike classic code adoption, where the goal is to minimize amendments to the model language and promote wholesale adoption, the IGCC is purposely designed as an adaptable tool that may become law in its entirety.

21 Adopting and Implementing IGCC A number of jurisdictions have legislation in place or in preliminary planning that adopt and/or reference the IGCC as their guideline for green construction. States and local jurisdictions from coast to coast have discussions underway to adopt the IGCC. 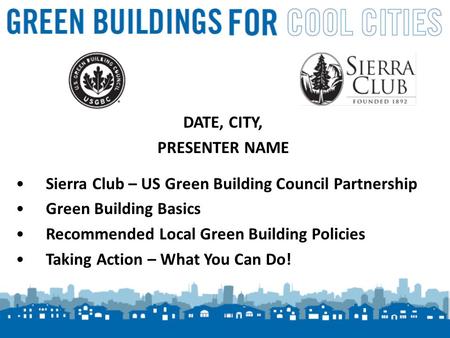 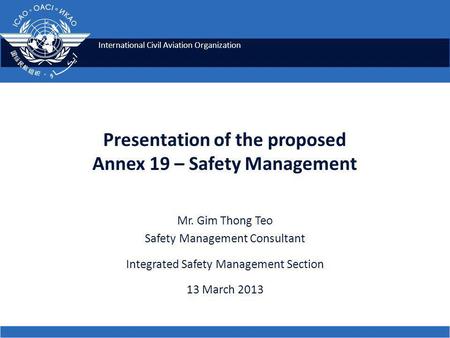 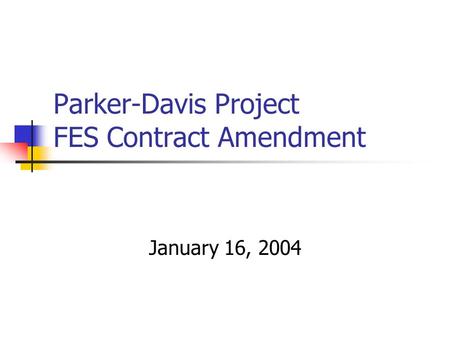 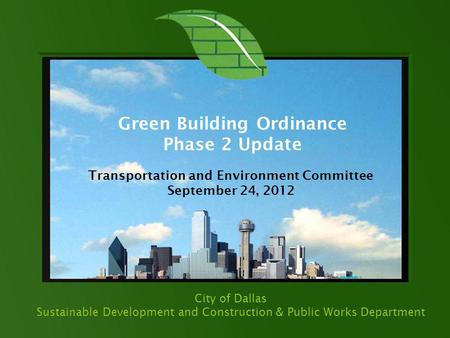 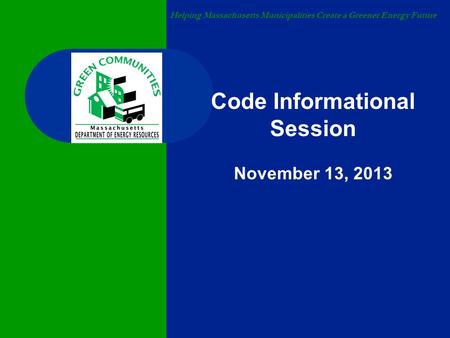 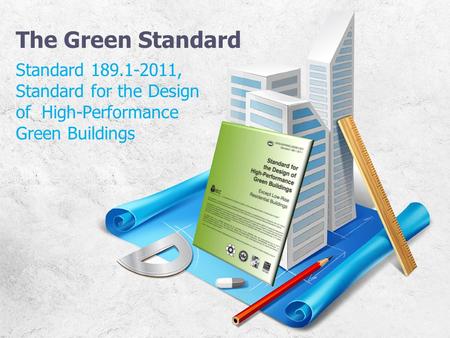 The Green Standard Standard , Standard for the Design of High-Performance Green Buildings. 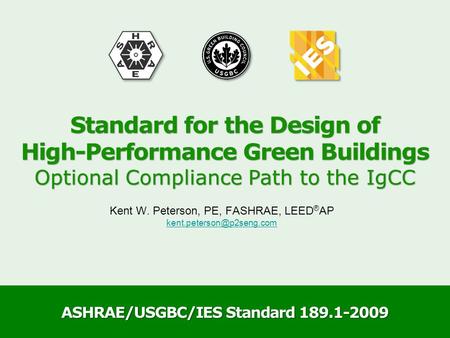 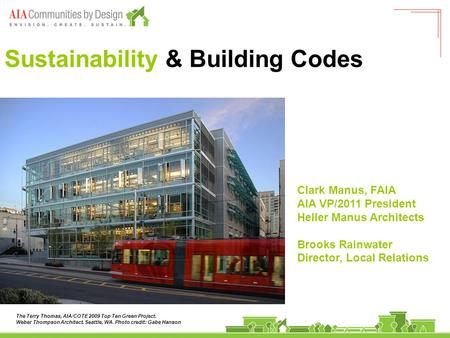 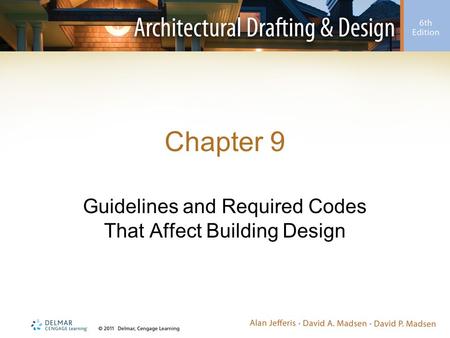 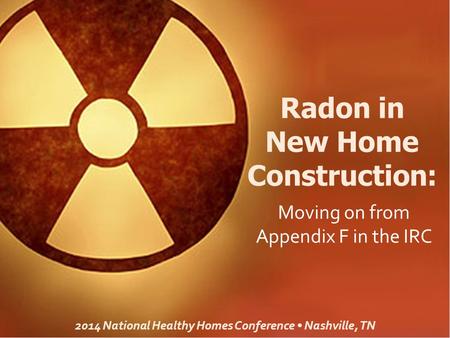 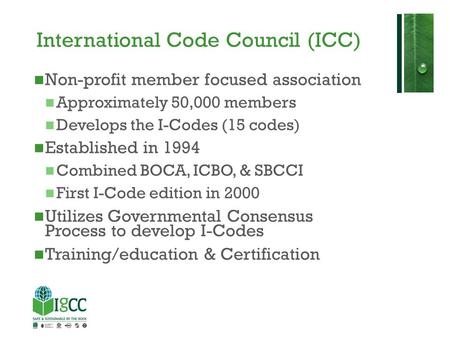 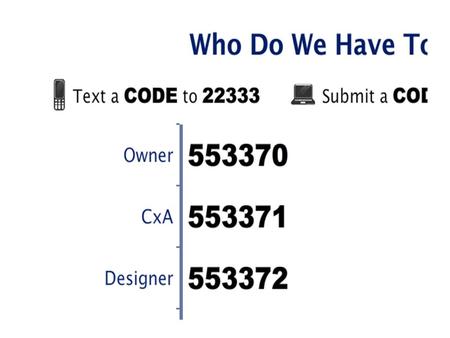 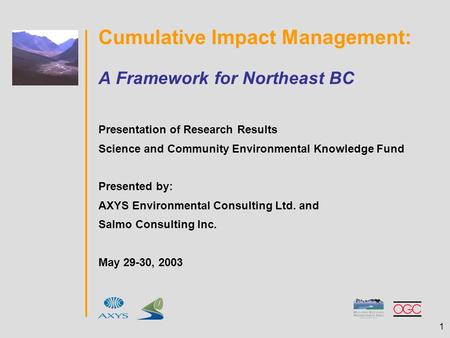 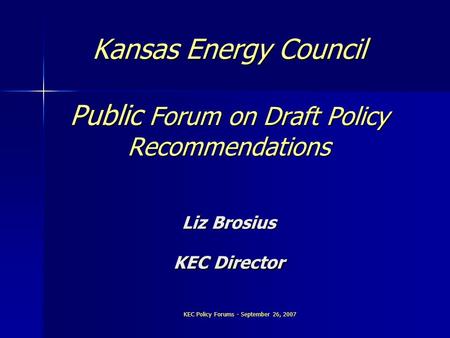 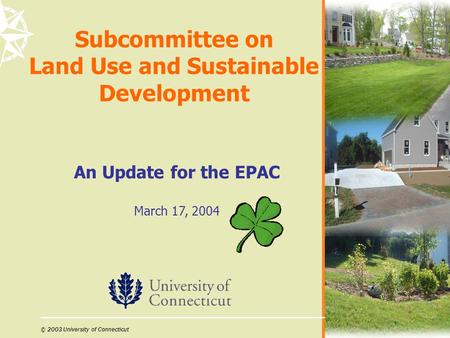 © 2003 University of Connecticut Subcommittee on Land Use and Sustainable Development An Update for the EPAC March 17, 2004. 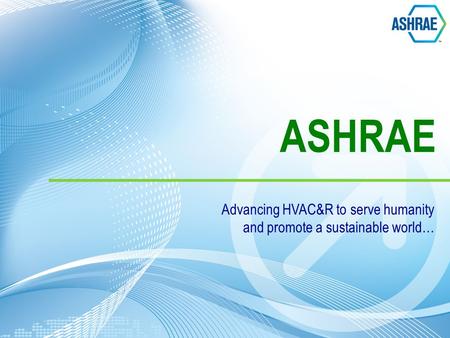 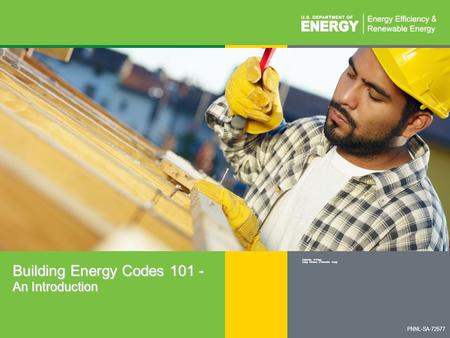 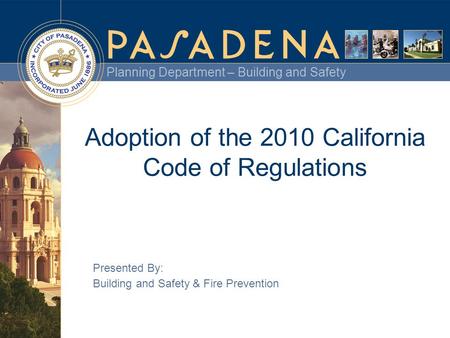 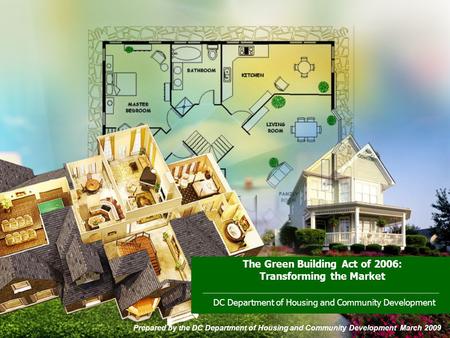