Ch. 6-8 Question: Why do some materials conduct and others don’t

Presentation on theme: "Ch. 6-8 Question: Why do some materials conduct and others don’t"— Presentation transcript:

1 Ch. 6-8 Question: Why do some materials conduct and others don’t
Ch. 6-8 Question: Why do some materials conduct and others don’t? (takes a few lectures to fully answer) Can we expand upon our discussion of metallic bonding to understand conductivity? When challenging, we try to simplify. Overarching question for next few lectures: Why do some materials conduct electricity and others do not? While we’ll realize a lot today, to fully answer this question will take several lectures. Any hard topic (like heat capacity), we try to break down into easier models. Can we do that here? Is there something else we’ve discussed in class that we can expand from? How about valence electrons? Good enough for a qualifier, however if you need to do research on conductivity or optical properties (which some of you will), you’ll need to go into band structure, so we’ll at least introduce this in future lectures. Simplistically yes, but it only works well in some cases. To understand fully why will take several lectures, but this is typically good enough for a qualifier.

2 Conductivity and the Drude Model Objectives
By the end of this section you should be able to: Understand how to apply the Drude model Determine the density of conduction electrons Calculate the electrical conductivity of a metal Discuss the classical Hall effect and why the Drude model doesn’t perfectly explain the results For more on Drude Model, see Ashcroft ch. 1&3 (If need more material, could add details on how this model works well to explain strength, but timing good now.) Could also potentially put thermal conductivity here, if time. Just like when we studied heat capacity, we are going to start with a simple model (which works well for some materials, here metals), then we’ll look at how to improve it to account for other types of materials.

5 Drude Model: A gas of electrons
Drude (~1900) assumed that the charge density associated with the positive ion cores is spread uniformly throughout the metal so that the electrons move in a constant electrostatic potential. All the details of the crystal structure is lost when this assumption is made. X + + + + All of the details of the structure are lost with this assumption. This is partly why this doesn’t work completely. + + U(r) U(r)

6 Drude makes the free electron approximation
U(r) U(r)=0 Neglect periodic potential & scattering between electrons Should remind you of a quantum well and this will be exactly how we are able to improve upon the Drude model. Reasonable for “simple metals” (Alkali Li,Na,K,Cs,Rb) What does this remind you of?

7 Drude Assumptions He also ignored electron-electron and electron-ion interactions (except to say electron-ion interaction were the cause of the scattering) Electron moves in straight line between collisions. Velocity changes instantaneously, but direction random. <v>=0, but <v2>T (gas) We will use a trick to use this model later (future) Explain why we are going into detail on this model, because once we renormalize for these interactions (effective mass), it works pretty well. It’s ok at explaining the basics of electrical and thermal conductivity for metals, but it misses the temperature dependence. He assumed the equipartition function to explain the temperature dependence of the velocity squared

8 A model for electrical conduction
Drude model in 1900 In the absence of an electric field, the conduction electrons move in random directions through the conductor with large average speeds. The drift velocity of the free electrons is zero. There is no current in the conductor since there is no net flow of charge. When an electric field is applied, in addition to the random motion, the free electrons drift slowly (vd ~ 10-4 m/s) in a direction opposite that of the electric field. (a) Average speed: Use ½ mv^2=3/2 kBT to solve for V~10^5 m/s Could introduce mobility here, but uses same letter as chemical potential (might be confusing). Not sure it’s really necessary. Mobility = vd/E (b) Estimate Average Speed

9 Drude Strengths/Weaknesses
Very simple and intuitive model Great at predicting strength and density of metals Weaknesses: Predicts too high of a classical specific heat (100x larger than observed at RT) Doesn’t explain both signs possible in Hall effect More details in Ashcroft, Chapter 3 (magnetoresistance, sign of thermoelectric field, AC conductivity, DC conductivity anisotropy) Explain why we are going into detail on this model, because once we renormalize for these interactions (effective mass), it works pretty well. It’s ok at explaining the basics of electrical and thermal conductivity for metals, but it misses the temperature dependence. He assumed the equipartition function to explain the temperature dependence of the velocity squared

10 Similar to finding number of atoms
For Drude model, we will need to know the conduction electron density n = N/V 6.022 x 1023 atoms per mole Multiply by number of valence electrons (Z) Convert moles to cm3 (using mass density m and atomic mass A) n = N/V = x 1023 Z m /A Similar to finding number of atoms Density = m/V, we want 1/V to go with the N from valence times Avogadro’s constant, so 1/V = density/mass

13 Predicting the Conductivity
Vd = drift velocity or average velocity (not speed) of conduction electrons If , what is the Would be good to explain this better, it’s similar to my equation of continuity slide from ch.9, pull from that Current  potential drop If we want σ or , how do we estimate vd? Current Density: J = I/A

18 How to measure the conductivity / resistivity
A four contact probe can overcome this problem A two-point probe can be used but the contact or wire resistance can be a problem, especially if the sample has a small resistivity.

20 The Drude Model Struggles with the Sign of the Hall Effect
In a current carrying wire when in a perpendicular magnetic field, the current should be drawn to one side of the wire. As a result, the resistance will increase and a transverse voltage develops. Lorentz force = -ev/c x H H Don’t forget that the electron is negative. + - -

22 The Hall coefficient Ohm’s law contains e2 But for RH the sign of e
is important. For Cu, electrons are the charge carriers so here we should get one works fine for the alkalis does not work at all for Bi (a field of 10 kilo-gauss, at liquid air temperature, increases the resistance of bismuth eightfold, whilst the same field causes an increase of only 0.1% in the resistance of silver) It was shown that in bismuth the relation between the structure and the available number of valency electrons was such that these electrons formed an almost closed group, or in other words an almost completely filled Brillouin zone. In such a case an electric current is carried by a number (in bismuth a very small number) of electrons, and an equal number of positive holes. By positive holes we mean the few vacant places which are left when a zone or energy band is almost completely filled. These vacancies behave like positive charges; their effective mass is, in general, smaller than that of free electrons. but maybe even worse for Be - Al because the sign is wrong so what if these had positive charge carriers? 10 kG increases the resistance of bismuth 8x, while only 0.1% for silver A hole is the lack of an electron. It has the opposite charge so +e.

24 Application: Hall Probe
The measurement of large magnetic fields (~1T) is often done by the Hall effect. A sample is placed in the magnetic field and the transverse voltage is measured. For a 100-m thick Cu film, in a 1.0 T magnetic field and through which I = 0.5 A is passing, the Hall voltage is V. Advantages: Hall effect devices are immune to dust, dirt, mud, and water, making them better for position sensing than other means such as optical and electromechanical sensing. Can also create non contact current sensors. As a current sensor, it measures the magnetic field of the following current. For many years the Hall effect was not used in practical applications because the generated voltage in the gold film was extremely low. However, in the second half of the 20th century the mass production of semiconductor chips started. Chips based on the Hall effect became inexpensive and widely available. Disadvantages: Magnetic flux from the surroundings (such as other wires) may diminish or enhance the field the Hall probe intends to detect, affecting results. Also, the output from this type of sensor cannot be used to directly drive actuators without amplification.

26 Temperature dependence of thermal conductivity K
Approximately equal to velocity of sound and so ~temperature independent. Tends to classical value at high T’s Mean free path = average velocity times scattering time ? Temperature dependence of phonon mean free length is determined by phonon-phonon collisions at low temperatures Since heat flow is associated with phonon flow, the most effective collisions for limiting the flow are those in which the phonon group velocity is reversed. Thus, Umklapp processes best limit the thermal conductivity.

28 Wiedemann-Franz Law Good heat conductors are usually good electrical conductors. Metals & Alloys: free e- pick up energy due to thermal vibrations of atoms as T increases and lose it when it decreases. Insulators: no free e-. Phonons are created as T increases, eliminated as it decreases. Major Assumption: thermal = electronic very high T & very low T (not intermediate) The ratio of the thermal conductivity and electrical conductivity at a constant temperature is a constant for metals Link to importance of Seebeck effect/thermoelectrics

29 Calculate conductivity
A wire (1mm in diameter by 1 m in length) of an aluminum alloy containing a partial percentage of Mn is placed in an electrical circuit as shown (not to scale). A voltage drop of 432 mV is measured across the length of the wire as it carries a 10 A current. Calculate the conductivity. Might be a good one to encourage ideas from the students to guide through the solution on the board.

30 How Far Apart are the Conduction Electrons?
density of conduction electrons in metals ~1022 – 1023 cm-3 rs = radius of a sphere whose volume is equal to the volume per electron This topic is discussed in Ashcroft and Mermin. Kittel and I decided it’s not really necessary. One can figure it out if you wanted to. Bohr radius = mean radius of the orbit of an electron around the nucleus of a hydrogen atom at its ground state Draw box with lots of circles in it on the board mean inter-electron spacing in metals rs ~ 1 – 3 Å

33 Main Results from Drude
dp/dt = -p(t)/ + force(time); compare to Netwon’s second law F=dp/dt There is an effective damping term due to collisions Also j = n e v t/tp VD(t) = VD(0)exp(-t/tp ) Probably should add Hall effect to the end of this lecture. Gives a quick example of how this can be used and saves me more time for the more complicated uses for next class.

Download ppt "Ch. 6-8 Question: Why do some materials conduct and others don’t" 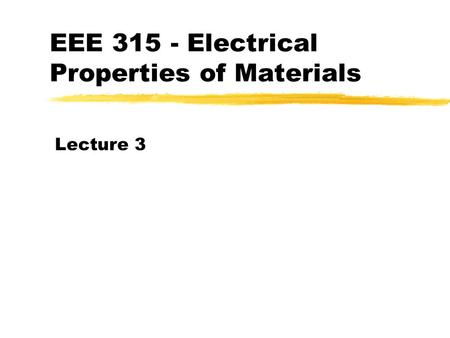 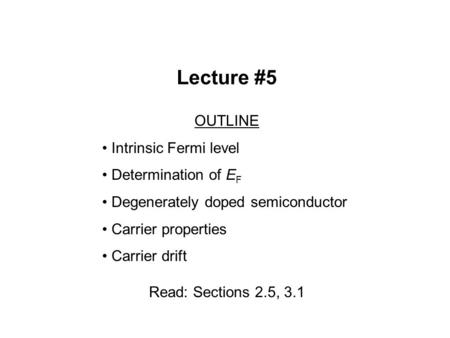 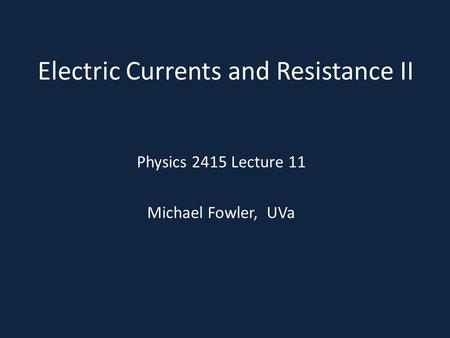 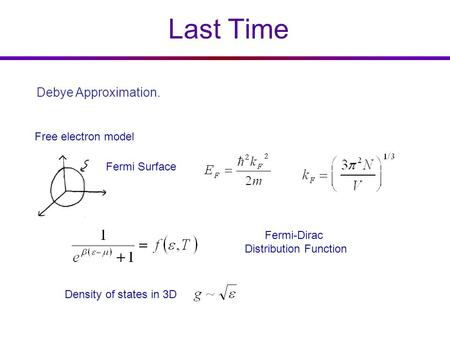 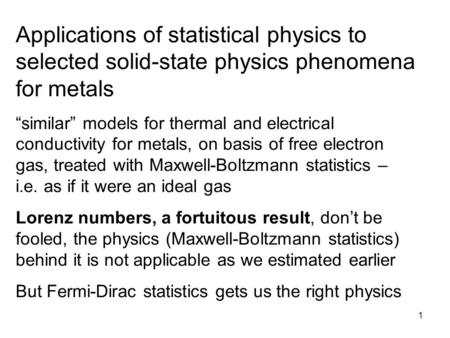 1 Applications of statistical physics to selected solid-state physics phenomena for metals “similar” models for thermal and electrical conductivity for. 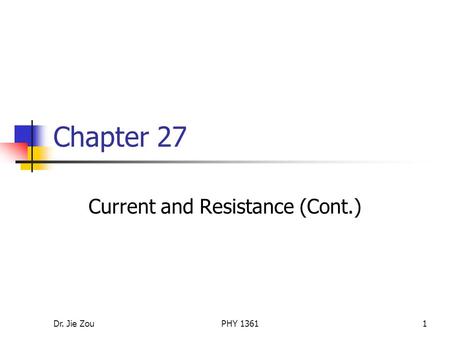 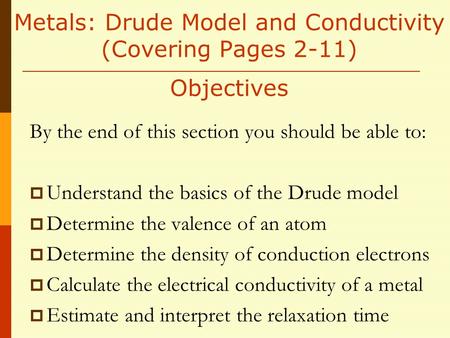 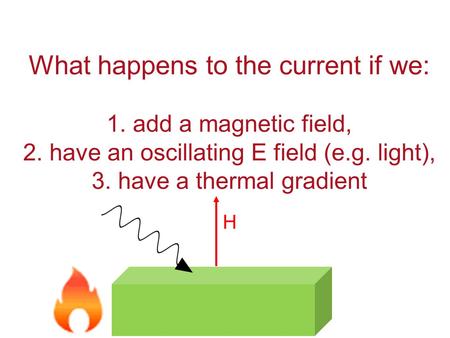 What happens to the current if we: 1. add a magnetic field, 2 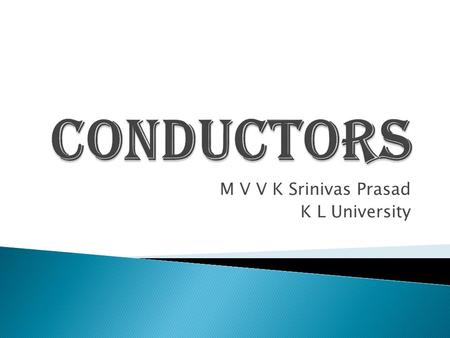 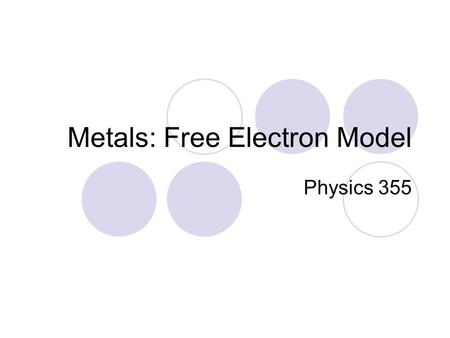 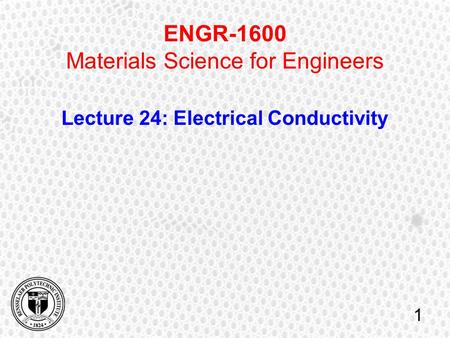 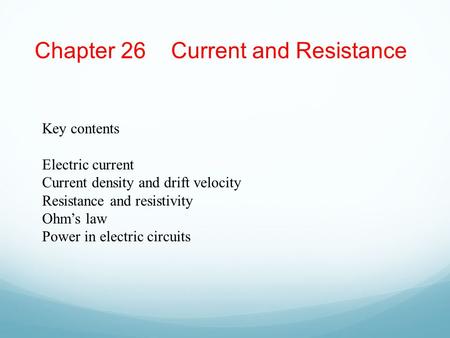 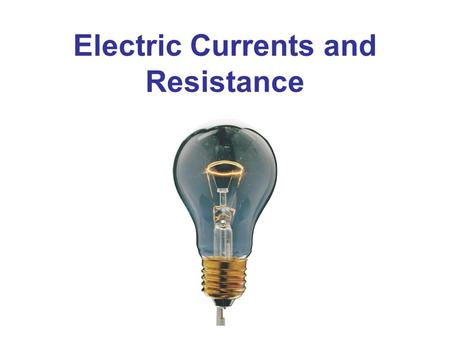 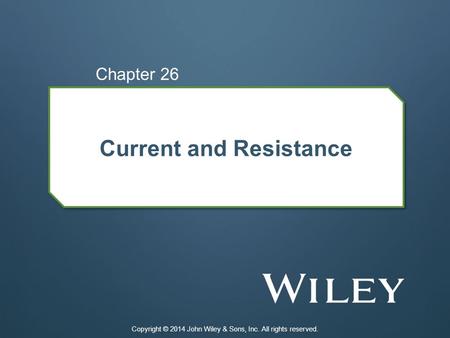 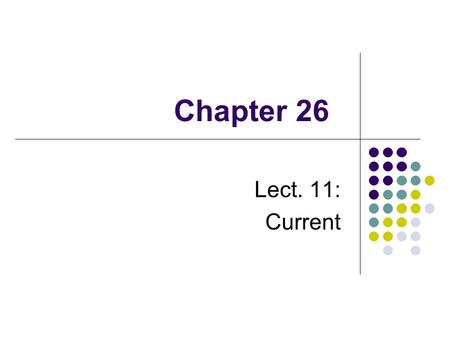 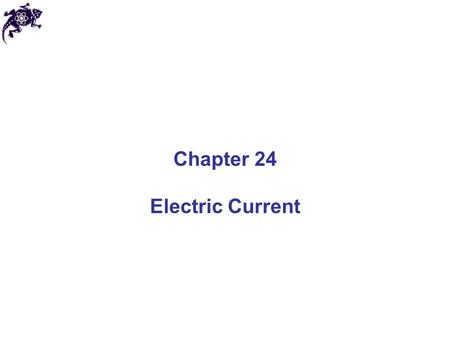 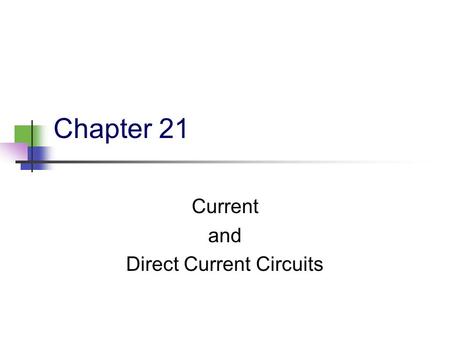 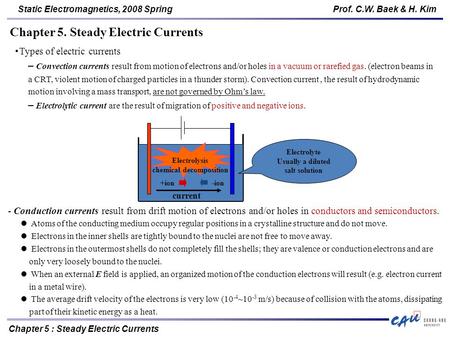 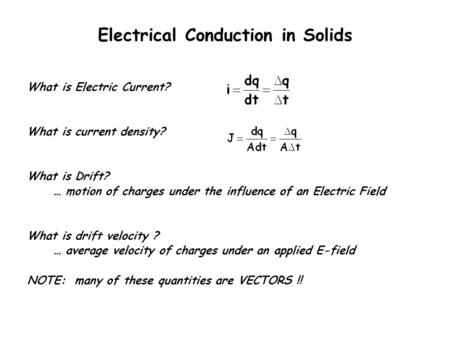