1 RR-TAG Liaison Report May 2007 IEEE 802.11-802.18
Month Year doc.: IEEE yy/xxxxr0 May 2007 RR-TAG Liaison Report May 2007 IEEE Date: Authors: Notice: This document has been prepared to assist IEEE It is offered as a basis for discussion and is not binding on the contributing individual(s) or organization(s). The material in this document is subject to change in form and content after further study. The contributor(s) reserve(s) the right to add, amend or withdraw material contained herein. Release: The contributor grants a free, irrevocable license to the IEEE to incorporate material contained in this contribution, and any modifications thereof, in the creation of an IEEE Standards publication; to copyright in the IEEE’s name any IEEE Standards publication even though it may include portions of this contribution; and at the IEEE’s sole discretion to permit others to reproduce in whole or in part the resulting IEEE Standards publication. The contributor also acknowledges and accepts that this contribution may be made public by IEEE Patent Policy and Procedures: The contributor is familiar with the IEEE 802 Patent Policy and Procedures < ieee802.org/guides/bylaws/sb-bylaws.pdf>, including the statement "IEEE standards may include the known use of patent(s), including patent applications, provided the IEEE receives assurance from the patent holder or applicant with respect to patents essential for compliance with both mandatory and optional portions of the standard." Early disclosure to the Working Group of patent information that might be relevant to the standard is essential to reduce the possibility for delays in the development process and increase the likelihood that the draft publication will be approved for publication. Please notify the Chair as early as possible, in written or electronic form, if patented technology (or technology under patent application) might be incorporated into a draft standard being developed within the IEEE Working Group. If you have questions, contact the IEEE Patent Committee Administrator at Rich Kennedy, OakTree Wireless John Doe, Some Company

3 RR-TAG Update So Far This Week To Be Done
May 2007 RR-TAG Update So Far This Week Ofcom (UK Regulator) presentation on License Exempt bands “Licence-Exemption Framework Review” - Andy Gowans Current status of the LE allocations (6% of spectrum below 60GHz) Key aims and objectives - maximise the efficient use of the spectrum Key proposals Better use of LE spectrum for greater economic value Spectrum sharing techniques Limited light licensing LE above a given frequency (most >60GHz can be LE) LE below a given power level (UWB) Review of IMT Advanced submission to ITU-R WP8F To Be Done Begin drafting responses to Ofcom LE Consultation Questions Rich Kennedy, OakTree Wireless 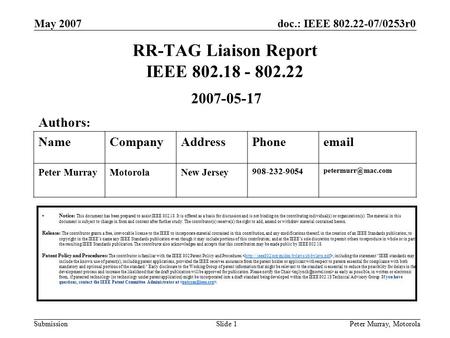 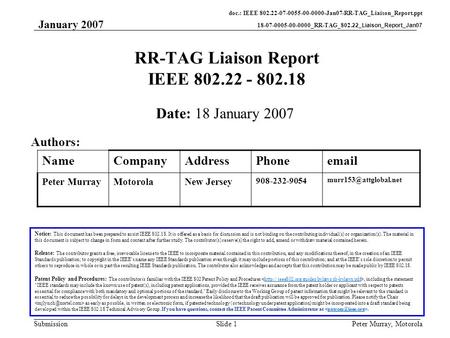 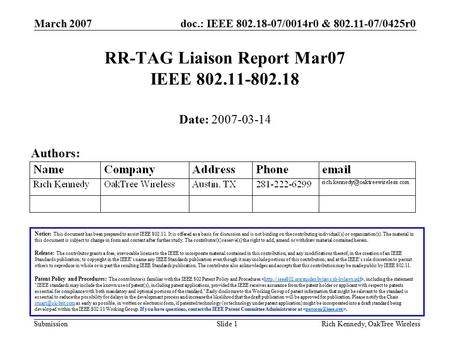 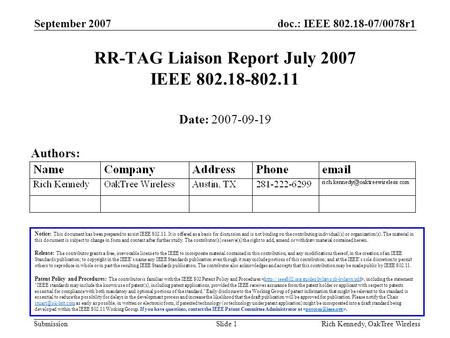 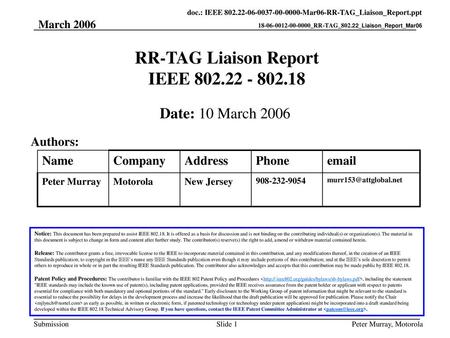 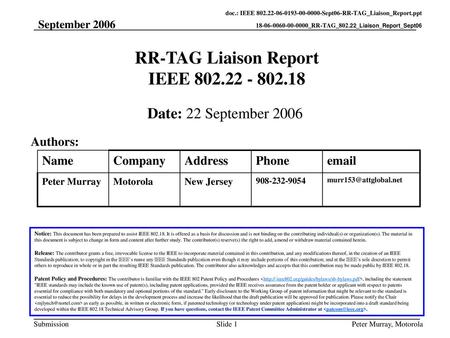