INFERNO By Dante Alighieri. LIFE AND TIMES  Dante was born in 1265 in Florence.  At the age of 9 he met for the first time the eight-year-old Beatrice.

Presentation on theme: "INFERNO By Dante Alighieri. LIFE AND TIMES  Dante was born in 1265 in Florence.  At the age of 9 he met for the first time the eight-year-old Beatrice."— Presentation transcript:

2 LIFE AND TIMES  Dante was born in 1265 in Florence.  At the age of 9 he met for the first time the eight-year-old Beatrice Portinari, who became in effect his Muse, and remained, after her death in 1290, the central inspiration for his major poems.  1285: he married and began a family  1302: when he was exiled from Florence, he was active in the cultural and civic life of Florence, served as a soldier and held several political offices.

3 The GUELFS and the GHIBELLINES  Competed for control of Florence  The Guelfs, with whom Dante was allied, were identified with Florentine political autonomy (independence or freedom)  The Ghibellines supported the Hohenstaufen emperors  1268: the Guelfs became the dominant force in Florence, by the end of the century, the Guelfs became divided (grounded in family and economic interests), became the “Whites” and “Blacks”

4 The GUELFS and the GHIBELLINES  1301: conflict arose between the Blacks (the faction most strongly committed to Guelf and papal interests) and the more moderate Whites, Pope Boniface VIII instigated a partisan settlement which allowed the Blacks to exile the White leadership, of whom Dante was one  Dante never returned to Florence, and played no further role in public life, but remained passionately interested in Italian politics  During the next twenty years Dante lived in several Italian cities  1319: he moved from Verona to Ravenna, where he completed the Paradiso, and where he died in 1321

5 INFERNO by DANTE ALIGHIERI  Inferno is part of an epic poem  There are 3 parts to the epic, The Divine Comedy: Inferno, Purgatorio, and Paradisio  Tells the story of Dante’s journey through Hell, guided by the Roman poet, Virgil (narrated by Dante)  Shades: souls residing in Hell

7 CIRCLE I (LIMBO) ~ THE UNBAPTISED, VIRTUOUS PAGANS  Geography: green fields, ground is firm, grassy and pleasant, air is clean and fresh  Sin: all of the people in Limbo are virtuous and sinless, but who for the lack of a single ceremony cannot be admitted into Paradise  Punishment: loss of Hope; they must exist in desire for the glory of God (often a God who they do not believe in), without ever being able to attain it  Figures: Virgil, Homer, Horace, Ovid, Caesar, Lucretia, Socrates, Plato, Aristotle, Democritus, Thales, Heraclitus, Euclid, Hector, Aeneas, Epictatus, Ptolemy, and Hippocrates, great thinkers, classic poets, great men

8 CIRCLE II ~ THE LUSTFUL  Geography: there is an eternal storm  Sin: excess of sexual passion, those souls who in life made pleasure their hope, with reason and love of God second  Punishment: infernal storm that lashes at them in darkness with rage and punishment, spinning through the air, blown about in pairs, they cry out lamentations and insults to God as they go, standing on the ground in the Second Circle are unsuccessful lovers attempting to be caught up by the winds of passion.  Figures: Semiramis, Cleopatra, Helen, Achilles, Paris, Tristan

9 MINOS  Minos wraps his long tail around the body of the sinner. The number of times is equal to the soul's assigned level (circle) of Hell.

10 CIRCLE III ~ THE GLUTTONOUS  Geography: mixture of stinking snow and freezing rain, which forms into a vile slush underfoot; a winding, dangerous trail leads down the precipice to the Fourth Circle.  Sin: wallow in food and drink, produce nothing but garbage and offal (rubbish)  Punishment: lie half-buried in the icy paste, swollen and exposed, and Cerberus, the ravenous three-headed dog of Hell, stands guard over them, ripping and tearing them with his claws and teeth  Figures: allusions to Last Judgement and Florentine politics, Ciacco (unknown reference)

11 CIRCLE IV ~ AVARICE AND PRODIGALITY  Geography: a flat plain of hard-baked clay  Sin: greed/lust for material gain, spending too freely  Punishment: the sinners are divided into two raging mobs, each bearing a great boulder-like weight, two mobs meet clashing their weights against one another, after meeting the mobs separate, pushing the great weights apart, and begin all over again, insult each other in the process  Figures: monks and church leaders (cardinals and popes)

12 CIRCLE V ~ WRATH AND SULLENESS  Geography: stinking swamp covered by thick fog, river Styx  Sin: anger that is expressed, and anger that is repressed  Punishment: partially submerged in the filthy river Styx, the wrathful ruthlessly attack themselves and one another, the sullen stew below the surface of the muddy swamp  Figures: Phlegyas (set fire to the temple of Apollo because the god had raped his daughter), Filippo Argenti (Dante's natural political enemy), 3 Furies, Medusa

13 THE RIVER STYX  The Styx is a body of water--a marsh or river-- in the classical underworld. Charon ferries souls of the dead. The Styx, according to Dante's design, is a vast swamp encompassing the fifth circle of hell, in which the wrathful and sullen are punished. It also serves a practical purpose in the journey when Dante and Virgil are taken by Phlegyas--in his swift vessel--across the marsh to the city of Dis.

14 THE CITY OF DIS  Dante designates all of lower hell-- circles 6 through 9, where more serious sins are punished--as the walled city of Dis. For Dante, Dis stands both for Lucifer and the lower circles of his infernal realm. Details of the city and its surroundings include moats, watch towers, high walls, and a well guarded entrance.

16 CIRCLE VII (RING 1) ~ VIOLENCE  Geography: divided into three rings (1 st : a river of blood)  Sin: violence against others (murderers/bandits)  Punishment: souls submerged in a river of boiling blood, depth determined by the severity of the sin  Figures: Minotaur (man's head and bull's body or reversed), Centaurs (men from the waist up with lower bodies of horses) guard the first ring

17 CIRCLE VII (RING 2) ~ VIOLENCE  Geography: 2 nd : horrid forest  Sin: violence against self (suicide)  Punishment: punished by Harpies (foul creatures with the head of a woman and body of a bird), they are perched in the suicide-trees, whose leaves they tear and eat--thus producing both pain and an outlet for the accompanying laments of the souls  Figures: Harpies, Pier della Vigna (was an accomplished poet, killed himself by smashing his head into a wall)

19 THE RIVER PHLEGETHON  “River or fire”  Overflow of river of blood in Circle I  Geryon: has an honest face, a colorful and intricately patterned reptilian hide, hairy paws, and a scorpion's tail, Geryon is an image of fraud - the realm to which he transports Dante and Virgil (Circles 8 and 9).

20 CIRCLE VIII (MALEBOLGE) ~ FRAUD  Geography: divided into ten gulfs, each with varying geography  Sins and Punishments: 1. Panderers and Seducers - scourged/lashed by demons 2. Flatterers - remain immersed in filth 3. Simonists (profiting on sacred objects) - submerged in apertures with only their feet sticking up, the soles of their feet are covered in flames 4. Diviners, Astrologers, and Magicians - faces are reversed so they are forced to walk backwards 5. Barrators or Public Peculators (fraud/theft/embezzlement of public or company funds) - plunged in a lake of boiling pitch guarded by demons 6. Hypocrites - pace continuously around the gulf under the pressure of caps and hoods that are gilt on the outside and leaden within 7. Thieves and Robbers - tormented by venomous and pestilent serpents 8. Evil counselors - engulfed in flames 9. Sowers of Scandal and Discord (Dispute) - limbs are maimed or divided in different ways 10. Falsifiers (Alchemists/Forgers) – each soul is plagued with a disease or physical deformity

22 THE WELL OF GIANTS  The giants encompass/guard the outer ring of the ninth circle.  The Giants physically connect circles 8 and 9: standing on the floor of circle 9, the upper halves of their huge bodies tower over the inner edge of circle 8. From a distance, Dante initially mistakes the Giants for actual towers.  Nimrod: described in the Bible as a "stout hunter before the Lord" (Genesis 10:9)  Ephialtes: one of the Giants who fought against Jove and the other Olympian gods  Antaeus: drawn from classical Greek tradition, lifts and places Dante and Virgil in the 9 th circle

23 CIRCLE IX ~ TRAITORS  Geography: four circles (Caina, Antenora, Ptolomea, Judecca) each inside the next; surrounded by giants; near center of Hell; Dante calls circle 9, a frozen lake, Cocytus (from Greek, meaning "to lament")  Sin: treachery - defined in Inferno as fraudulent acts between individuals who share special bonds of love and trust

24 CAINA  Sin: traitors to kin  Punishment: immersed face down in the ice  Figures: Camiccione de’ Pazzi, Francesca identified her husband (Gianciotto)--who murdered her and Paolo (Gianciotto's brother)--as a future inhabitant of Caina, two brothers, the Ghibelline Napoleone and the Guelph Alessandro, who murdered one another because of a dispute over their inheritance

25 ANTENORA  Sin: traitors to their country  Punishment: gnawing on each other  Figures: Bocca degli Abbati (a Ghilibene by practice, Bocca pretended to fight on the side of the Guelphs, and betrayed his Guelph countrymen at a decisive moment in the battle), Count Ugolino de’ Gherardeschi is chewing on Archbishop Ruggeri’s head

26 PTOLOMEA  Sin: traitors to their guests  Punishment: their souls descend immediately to hell and their living bodies are possessed by demons when they commit these acts; head up in ice with eyes frozen  Figures: Friar Alberigo de’ Manfredi, Fra Alberigo

28 LUCIFER  Lucifer, Satan, Dis, Beelzebub--Dante throws every name in the book at the Devil, once the most beautiful angel (Lucifer means "light-bearer")  Lucifer is the wretched emperor of hell  His flapping wings generate the wind that keeps the lake frozen and his three mouths chew on the shade-bodies of three arch-traitors, the gore mixing with tears gushing from Lucifer's three sets of eyes Lucifer's three faces--each a different color (red, whitish-yellow, black)- -parody the doctrine of the Trinity: three complete persons (Father, Son, Holy Spirit) in one divine nature--the Divine Power, Highest Wisdom, and Primal Love that created the Gate of Hell

29 EXIT FROM HELL  After Dante and Virgil have passed through the center of the earth, their perspective changes and Lucifer appears upside-down, with his legs sticking up in the air.

Download ppt "INFERNO By Dante Alighieri. LIFE AND TIMES  Dante was born in 1265 in Florence.  At the age of 9 he met for the first time the eight-year-old Beatrice." 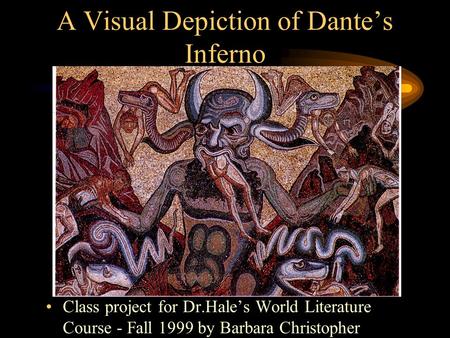 A Visual Depiction of Dante’s Inferno 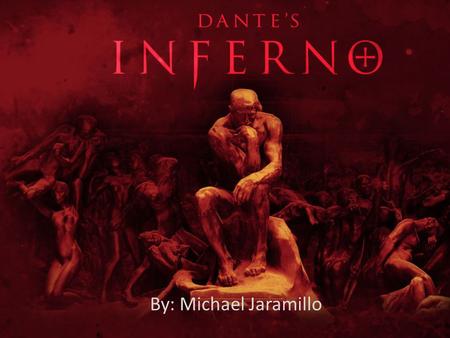 By: Michael Jaramillo. Introduction Written by Dante Alighieri in Dante’s Inferno is the first part of The Divine Comedy. There are three parts. 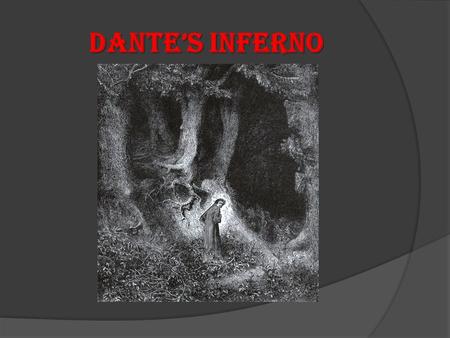 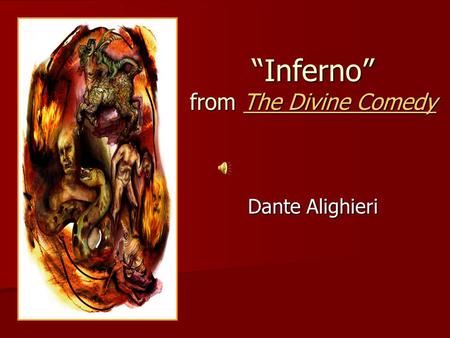 “Inferno” from The Divine Comedy 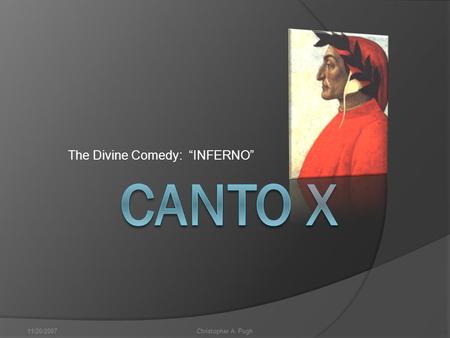 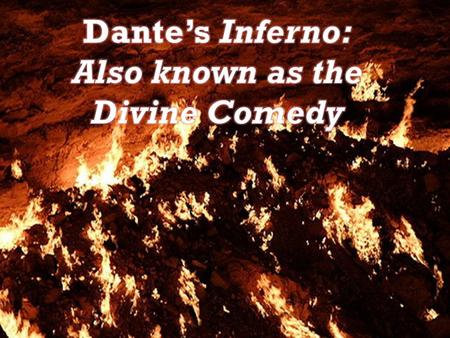 How does Dante use his life and his times in the Inferno? What do you already know about The Inferno? 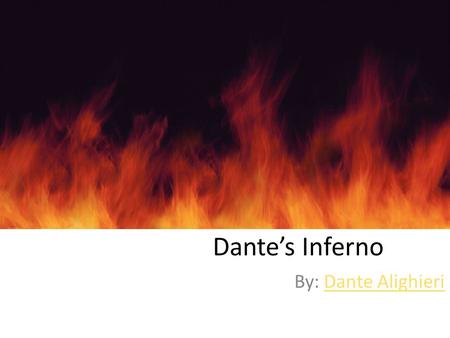 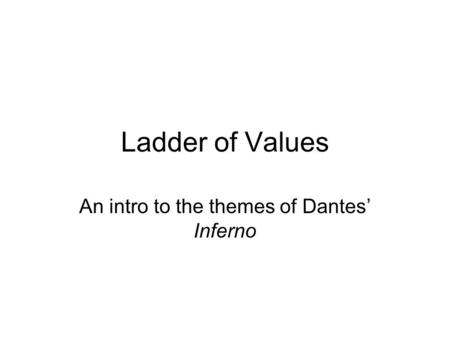 Ladder of Values An intro to the themes of Dantes’ Inferno. 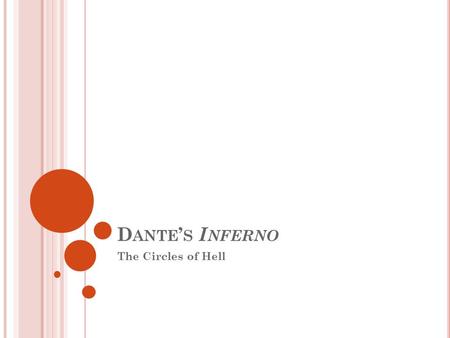 D ANTE ’ S I NFERNO The Circles of Hell. A CTIVATOR : P ERSONAL C ONNECTION INSTRUCTIONS: You have received nine post-it notes that you should number. 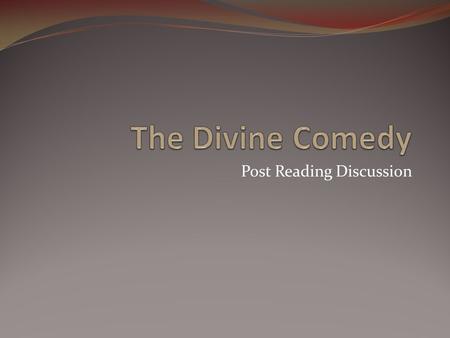 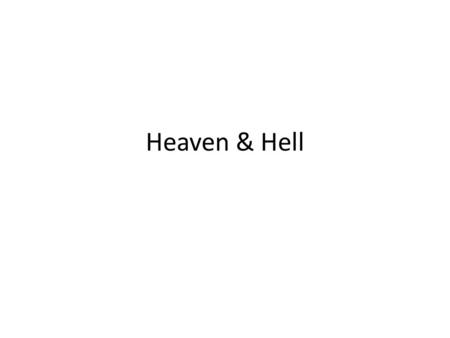 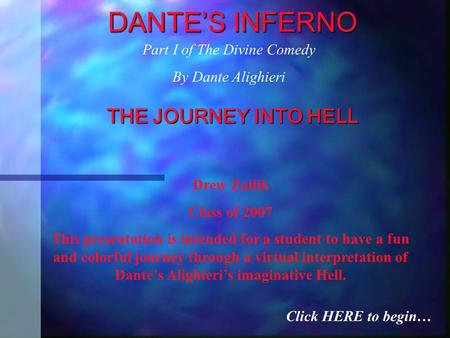 DANTE’S INFERNO THE JOURNEY INTO HELL Drew Zailik Class of 2007 This presentation is intended for a student to have a fun and colorful journey through. 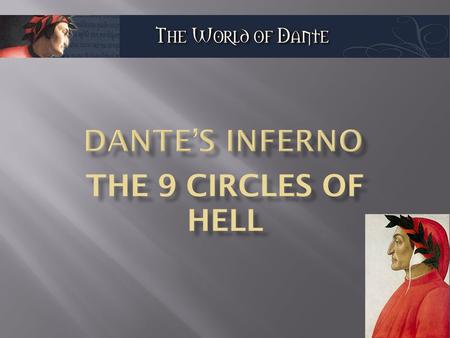 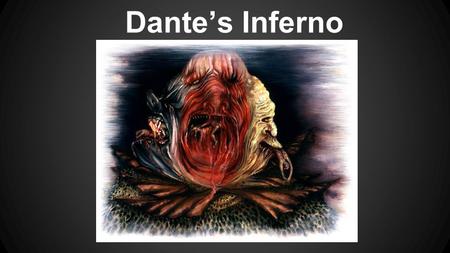 Dante’s Inferno. The Dark Wood of Error The encounter with the three beasts. 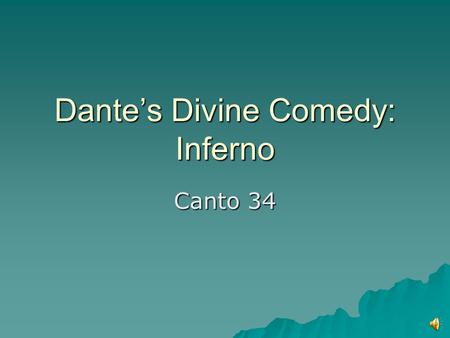 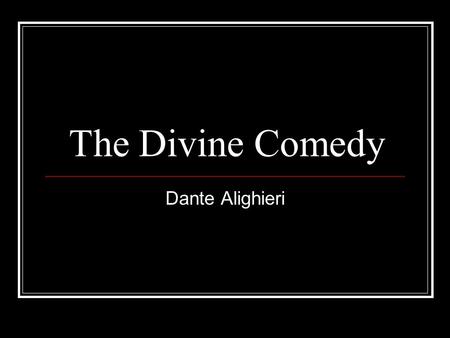 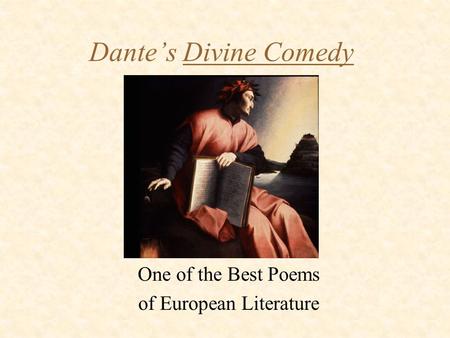 Dante’s Divine Comedy One of the Best Poems of European Literature. 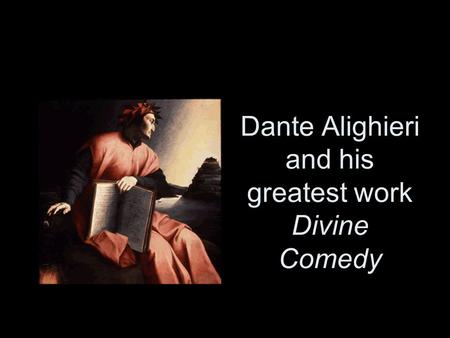 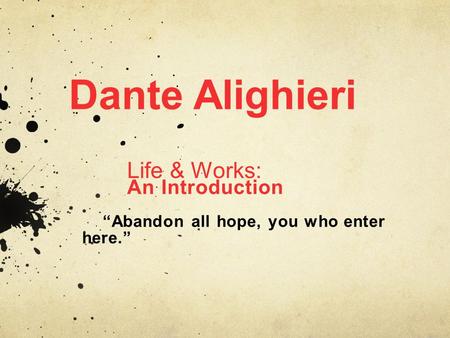 Dante Alighieri Life & Works: An Introduction “Abandon all hope, you who enter here.” 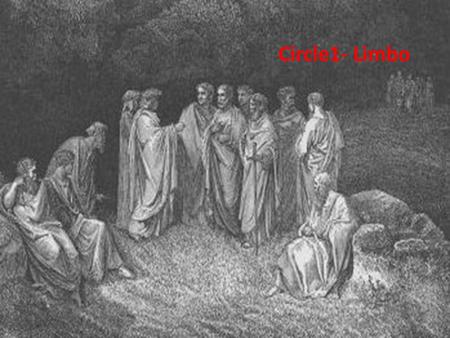 Circle1- Limbo. Dante’s First Circle of Hell is resided by virtuous non-Christians and unbaptized pagans who are punished with eternity in an inferior.