Presentation on theme: "ECONOMIC MYSTERY WHY NOT LEAVE? Before the Civil War (pre-1861), African Americans had been slaves in the South for generations. They had to stay where."— Presentation transcript:

2 B.T.WASHINGTON & W.E.B.DUBOIS COMPARE AND CONTRAST THE TWO IN THE FOLLOWING AREAS: *BACKGROUND(where they were born, conditions, family, etc.) *EDUCATION *ACCOMPLISHMENTS *PHILOSOPHY on how one may achieve equality and ending “JIM CROW.” WHICH OF THESE TWO DO YOU BELIEVE HAD GREATER SIGNIFICANCE ON AMERICA? USE EVIDENCE TO SUPPORT YOUR OPINION.

7 Plessy vs. Ferguson The Case: Homer Plessy, 1/8th black, was arrested for sitting in the “white car” of a Louisiana train in violation of that state’s “Separate Car Act.” The case was appealed to Supreme Court.

8 Supreme Court Ruling 1896 Plessy v. Ferguson The Ruling: SEPARATE facilities were lawful as long as they were EQUAL. Justice John Harlan, the lone dissenter wrote, “Our Constitution is color-blind.” Supreme Court in 1896

15 Booker T. Washington Outlined his views on race relations in a speech at the Cotton States and International Exposition in Atlanta – “Atlanta Compromise” Felt that black people should work to gain economic security before equal rights Believed black people will “earn” equality

16 Booker T. Washington Developed programs for job training and vocational skills at Tuskegee Institute Asked whites to give job opportunities to black people Was popular with white leaders in the North and South

17 Booker T. Washington Was unpopular with many black leaders Associated with leaders of the Urban League which emphasized jobs and training for blacks

19 W.E.B. DuBois Views given in The Souls of Black Folks and The Crisis Strongly opposed Booker T. Washington’s tolerance of segregation Demanded immediate equality for blacks

Download ppt "ECONOMIC MYSTERY WHY NOT LEAVE? Before the Civil War (pre-1861), African Americans had been slaves in the South for generations. They had to stay where." 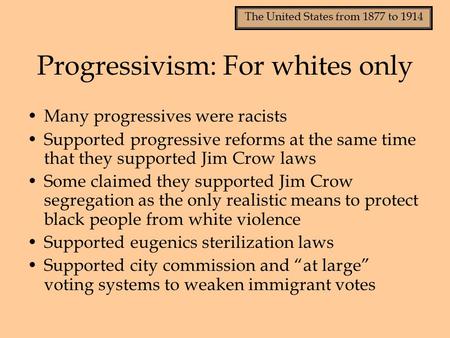