2 Earth Photo Matter is recycled within and between ecosystems.

7 During the day, the sun heats the atmosphere.
Water changes from a gas to a liquid through the process of condensation. Water vapor in the atmosphere condenses into tiny droplets that form clouds. When the droplets get large enough, they fall to Earth’s surface as precipitation—rain, snow, sleet, or hail.

9 On land, much of the precipitation runs along the surface of the ground until it enters a river or stream that carries the runoff back to an ocean or lake. Rain also seeps into the soil, some of it deeply enough to become ground water. Water in the soil enters plants through the roots, and the water cycle begins again.

13 Carbon is a key ingredient of living tissue.
In the atmosphere, carbon is present as carbon dioxide gas, CO2. Carbon dioxide is released into the atmosphere by volcanic activity respiration human activities the decomposition of organic matter

14 Plants take in carbon dioxide and use the carbon to build carbohydrates during photosynthesis.
The carbohydrates are passed along food webs to animals and other consumers. In the ocean, carbon is also found, along with calcium and oxygen, in calcium carbonate, which is formed by many marine organisms.

17 Phosphorus is necessary for nucleic acids, fats, cell membranes, bones, teeth and shells
There is very little phosphorus in the atmosphere, and most phosphorus is stored in rocks and ocean sediments. This phosphorus is slowly released into water and soil and then used by organisms Phosphorus is a key part of DNA and RNA.

19 Organisms need nitrogen to build proteins.
Different forms of nitrogen cycle through the biosphere. Nitrogen gas is the most abundant form of nitrogen on Earth. It cannot be directly used by organisms. Nitrogen must be converted into compounds that can enter food webs by the process of “Nitrogen Fixation”

20 Nitrogen Fixation How do we get the Nitrogen we need? Nitrogen Fixation. Specialized bacteria convert N2 from the atmosphere to ammonia (NH3) for the plants to use. Plants will use to the ammonia to make nitrogen-containing organic molecules Animals get nitrogen by eating plants or plant-eating animals 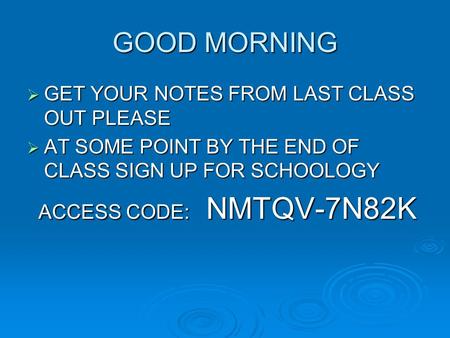 GOOD MORNING  GET YOUR NOTES FROM LAST CLASS OUT PLEASE  AT SOME POINT BY THE END OF CLASS SIGN UP FOR SCHOOLOGY ACCESS CODE: NMTQV-7N82K ACCESS CODE: 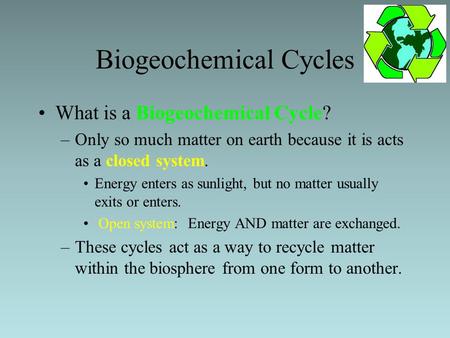