1 United States Foreign Policy 1890-1914
America in Asia: China and the Open Door Open Door Policy-China is a weak country in the 1890s. European powers had basically spit China into spheres of influence. (1899) Secretary of State John Hay urged European leaders respect Chinese rights and fair competition (this is the Open Door) Boxer Rebellion-(1900) Super-patriotic group of Chinese trained in martial arts murdered foreigners and Christians. A multinational force (including American soldiers) stopped the rebellion. Results-Gave all nations equal trading access in China. Guaranteed that China would not be taken over by a foreign power. 1

2 United States Foreign Policy 1890-1914
American Power: Building the Panama Canal Background-US needs a two ocean navy to protect interests. Spanish-American war demonstrated the lack of mobility. Rights to the Canal-Hay-Pauncefote Treaty (1901). Authorized the US to construct and manage a Central American canal. The canal was to be open to all nations and rates to be fair and equal. (1902) Congress chose the Panama route. Revolution-Panama was part of Colombia. Colombia rejected $10 million and $250,000/year. (1903) the US navy supported Panamanian revolt. US recognized independent Panama 3 days after revolt. Construction-( ). Cost $400 million. Problems with labor, landslides, and disease. 2

3 United States Foreign Policy 1890-1914
Theodore Roosevelt’s Foreign Policy: Carry a Big Stick Roosevelt Corollary-Preventative intervention. US would intervene in Latin America to keep European powers out of the Western Hemisphere. Corollary Results-Used to justify all interventions. US Marines will be sent multiple times to Latin American countries. Latin American countries views this as American oppression. Roosevelt in Action-Roosevelt was not afraid to flex American muscle. Roosevelt acted as mediator in Russo-Japanese War (won Nobel Peace Prize in 1906). Sent the US Navy to protect the Panamanian revolt (1903). (1907) ordered the Great White Fleet on highly visible voyage around the world (show off American naval power). 3

4 United States Foreign Policy 1890-1914
William H. Taft’s Foreign Policy: Dollar Diplomacy Background-Federal government encouraged Wall Street bankers and other major US corporations to invest in foreign countries that were of a strategic concern to the US. The dollar would replace Roosevelt’s big stick. Dollar Diplomacy in the Caribbean-Main area of US strategic importance. US pumped money into this area to keep other countries out and to uphold the Monroe Doctrine. Policy failed when civil distress broke out in Cuba, Honduras, and the Dominican Republic. President Taft had to send in the Marines to protect American investments. 4 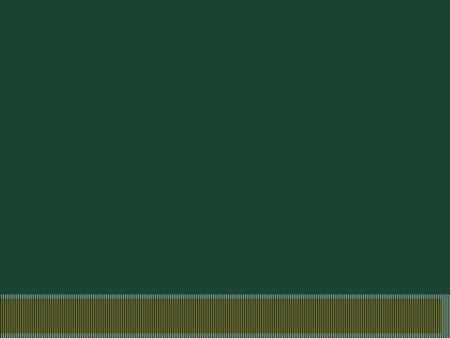 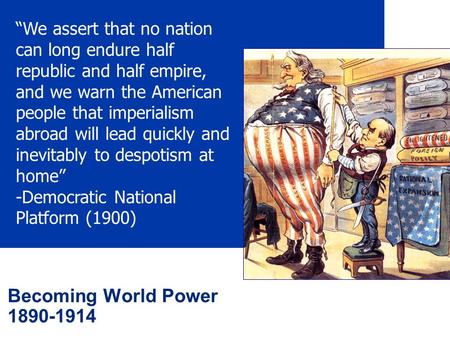 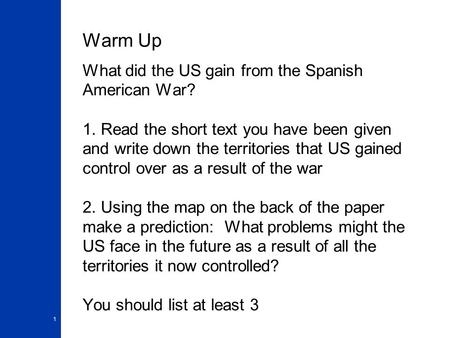