4 Sentence Notes We put words together to form sentences. Parts of a Sentence: Every sentence must have at least two parts and be a complete thought. 1. SUBJECT- noun or pronoun that the sentence is about 2. VERB- the verb part of the sentence *practice* The Blue Team | won. The Phillies | beat the Braves.

5 Kind of Sentences We can classify sentences by purpose. 1. DECLARATIVE makes a statement 2. INTERROGATIVE asks a question 3. IMPERATIVE commands or requests 4. EXCLAMATORY shows excitement *Practice* EXC. What a great class this is! DEC. This is easy. INT. Who’s there? IMP. Sit down.

7 Punctuation 1. PERIOD – the end mark for a statement or command, used with an abbreviation 2. QUESTION MARK –the end mark for a question 3. EXCLAMATION POINT –the end mark showing excitement 4. QUOTATION MARKS –used to enclose words that are spoken directly and some titles 5. SEMICOLON –used to join pars of a compound sentence if no coordinating conjunction is used

8 Punctuation cont. 6. APOSTROPHE – used in possessive nouns and contractions 7. HYPHEN –shows a word break at the end of a line, used in some compound words and some compound numbers 8. COLON – used to introduce a list of items or in time expressed in numerals 9. COMMA – used to separate items in a series and introductory words

9 Sentence Errors 1. Fragment- incomplete, part of a sentence 2. Run-on- too much, two or more sentences written incorrectly as one To correct a fragment—add more words To correct a run-on– semicolon (;) period and a capital letter (.T) comma and a conjunction (, and) 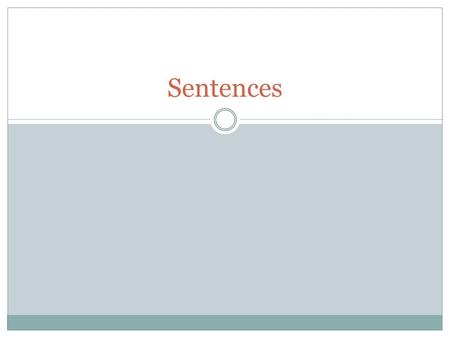 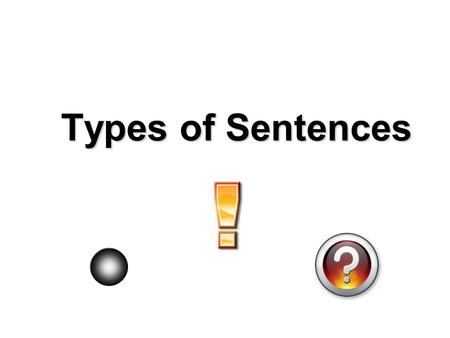 Types of Sentences. DeclarativeDeclarative – a sentence that makes a statement or gives information and ends with a period. The New York Yankees is my.