It's Time A 63-year-old woman was admitted because of severe abdominal pain, fatigue and bloody diarrhea.

Presentation on theme: "It's Time A 63-year-old woman was admitted because of severe abdominal pain, fatigue and bloody diarrhea."— Presentation transcript:

1 It's Time A 63-year-old woman was admitted because of severe abdominal pain, fatigue and bloody diarrhea.

2 Her symptoms had started about 3 months prior to admission. She was initially evaluated by her local physician, referred to a surgeon and underwent an exploratory laparotomy.

4 She underwent a colonoscopy, which demonstrated mild inflammation of the rectum

6 and severe pancolitis with deep ulcers and pseudopolyps.

8 The terminal ileum was spared. Biopsies were most consistent with active ulcerative colitis. No viral inclusions were seen.

9 She was started on prednisone and mesalamine. About 2 weeks later, she presented with worsening symptoms despite medical therapy.

10 She was afebrile and tachycardic.

11 The examination revealed a Cushingoid facies, pallor and had some periorbital edema. The abdomen was diffusely tender with rebound tenderness.

12 The laboratory tests demonstrated an anemia with a hemoglobin of 11.9 g/dl, leukocytosis with 12,700/ 祃 and hypalbuminemia with 1.9 g/dl. A plain film of her abdomen did not show free air.

13 Because of her physical findings, a CT scan was obtained, which revealed thickening of the colonic wall.

15 In view of her physical findings, the need for colectomy was discussed with the patient.

16 Stool studies were positive for Clostridium difficile toxin, and treatment with vancomycin was started. She received intravenous steroids and total parenteral nutrition for bowel rest.

17 Because of her physical findings, the potential need of colectomy was discussed.

18 Her symptoms improved slightly. As the pattern of her colonoscopic findings with relative rectal sparing raised the possibility of Crohn disease, a small bowel follow-through was performed to see whether she might be a candidate for infliximab therapy.

21 The patient status suddenly deteriorated, she became tachycardic and febrile.

23 Her abdomen was tender with guarding and rebound.

24 A plain film did not show free air, but demonstrated a narrow and irregular colonic lumen.

26 Based on these findings, the decision for colectomy was made.

27 Discussion: About 10 ?15 % of patients present with refractory inflammatory bowel disease at the onset of their illness.

28 Ongoing bleeding, perforation or toxic megacolon may lead to emergency surgery. Therefore, an experienced surgeon should be involved in the management of patients admitted for treatment of severe colitis.

29 It is important to look for potentially correctable exacerbating factors, such as Clostridium difficile colitis, as in the patient presented, or complicating viral infections. Intravenous cyclosporin may induce remissions in some cases of medically refractory colitis.

30 However, concerns about adverse and in isolated cases even fatal effects as well as the rapid recurrence soon after discontinuation of cyclosporin have dampened the initial enthusiasm related to the use of this agent in severe inflammatory bowel disease.

31 Timely colectomy will lead to more rapid recovery and increase the chances of full rehabilitation compared to continued conservative therapy in patients with refractory colitis.

Download ppt "It's Time A 63-year-old woman was admitted because of severe abdominal pain, fatigue and bloody diarrhea." 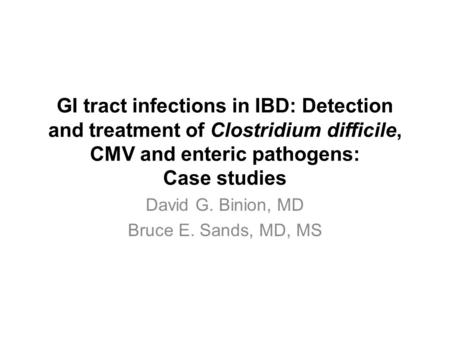 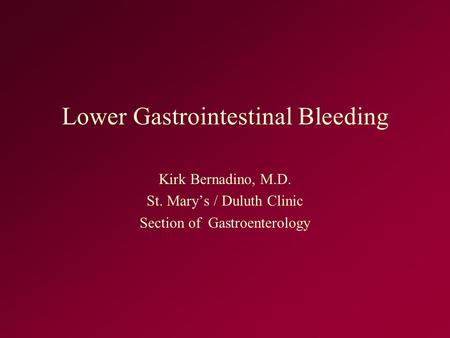 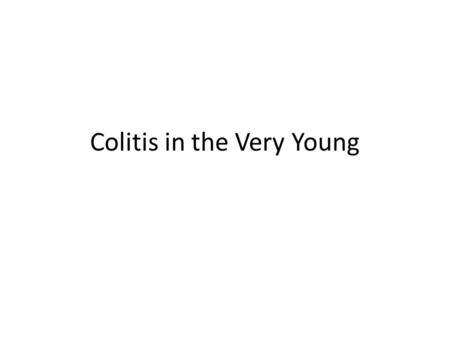 Colitis in the Very Young 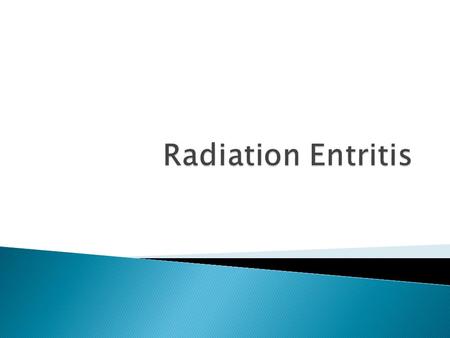  A 77-year-old comes to the ED with complaints of diarrhea, rectal pain and urgency for 3 days. His History is notable for Ischemic Heart disease, Hyperlipidemia, 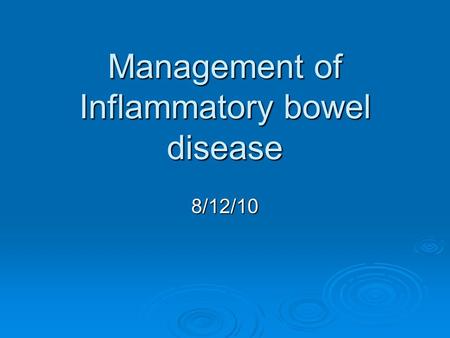 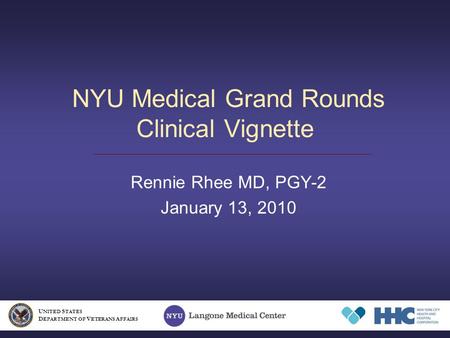 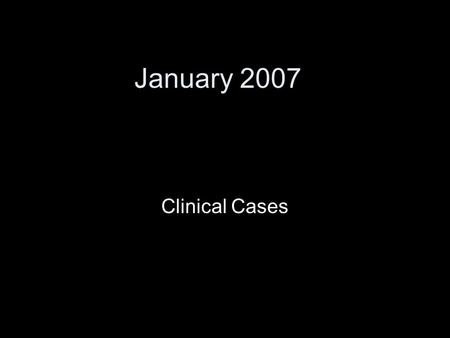 January 2007 Clinical Cases. BACKGROUND A 57-year-old man presents to a local emergency department with severe abdominal pain after being evacuated from. 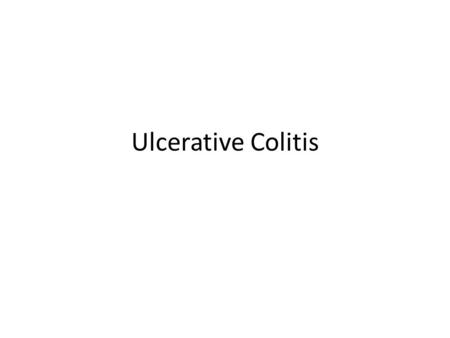 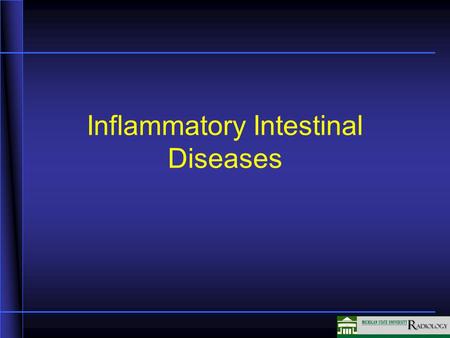 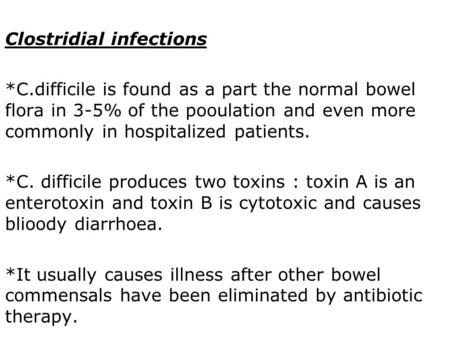 Clostridial infections *C.difficile is found as a part the normal bowel flora in 3-5% of the pooulation and even more commonly in hospitalized patients. 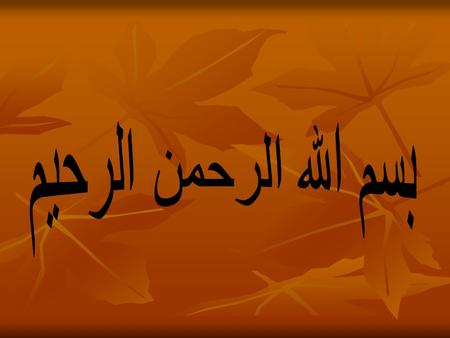 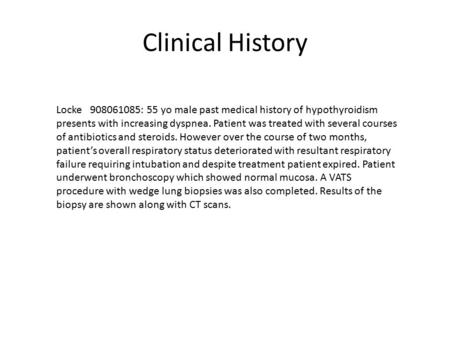 Clinical History Locke : 55 yo male past medical history of hypothyroidism presents with increasing dyspnea. Patient was treated with several. 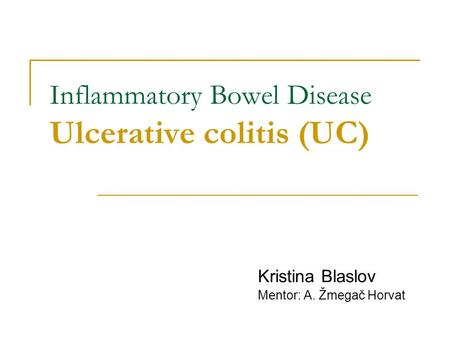 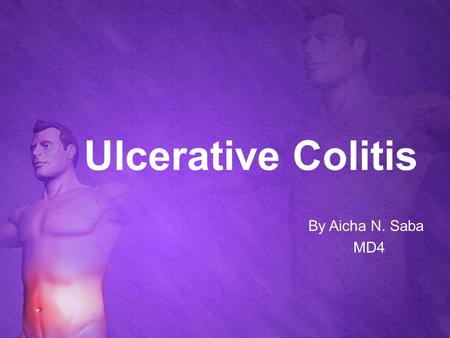 Ulcerative Colitis By Aicha N. Saba MD4. What is it? Ulcerative colitis is an inflammatory bowel disease that causes long-lasting inflammation and ulcers. 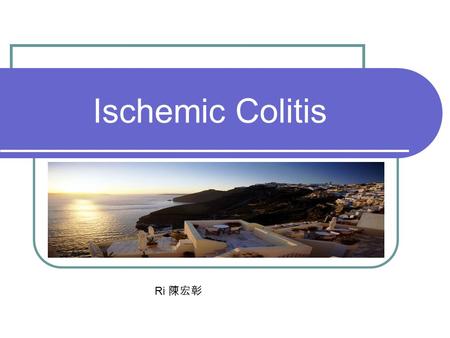 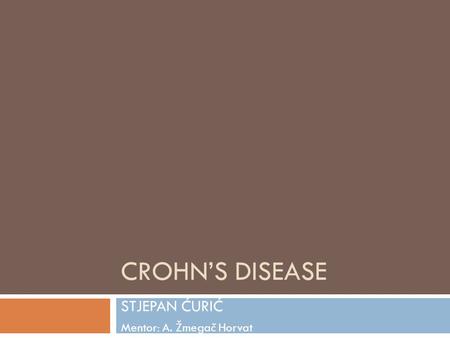 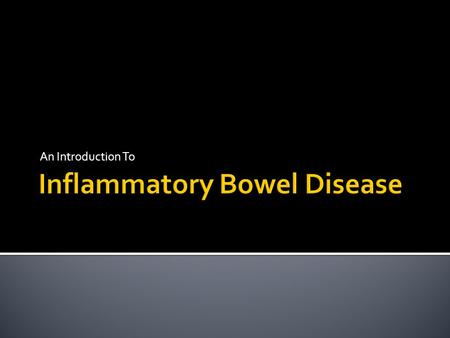 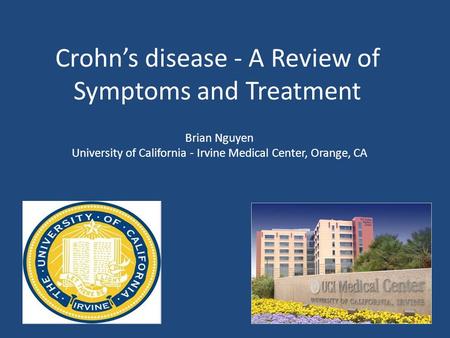 Crohn’s disease - A Review of Symptoms and Treatment 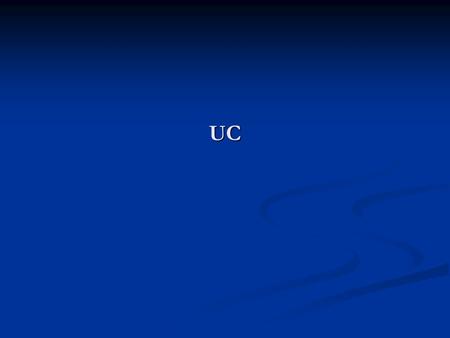 UC. Ulcerative Colitis ( UC ) Ulcerative colitis is an inflammatory bowel disease (IBD) that causes chronic inflammation of the digestive tract It is. 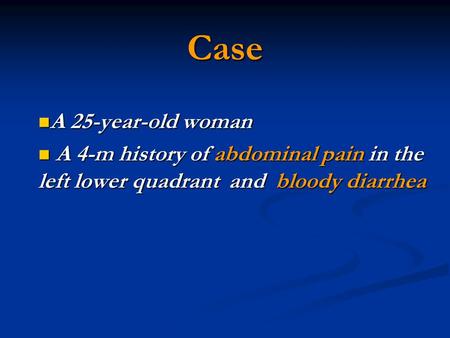 Case A 25-year-old woman A 4-m history of abdominal pain in the left lower quadrant and bloody diarrhea.