Commedia dell’Arte and Eruopean theater up to One Man, Two Guvnors

Presentation on theme: "Commedia dell’Arte and Eruopean theater up to One Man, Two Guvnors"— Presentation transcript:

1 Commedia dell’Arte and Eruopean theater up to One Man, Two Guvnors
Zannis, Harlequins, Pulcinellas, lovers, Pierrots, and so on

3 Commedia dell’arte A theater based on stock characters and improvisation All the characters except the lovers wear masks so it is called the “theater of masks.”

4 Influence of Commedia Began about 1560 in Italy and spread through Europe in the 1600’s The stock characters and plots were extremely influential on playwrights such as Marlowe, Shakespeare, Moliere, & Goldoni. It turned into the British “pantomime” and then became influential on Dickens, Barry (Peter Pan), and many other fiction writers.

5 Typical Plots “love intrigues, clever tricks to get money or outwit some simpleton. There were the same long-lost children stolen by the Turks, the same plotting maids, bragging captains, aged fathers and wily widows. Each gentleman had his parasite, each woman her confidante. There was considerable diversity of incident, such as night scenes, in which the hero was mistaken for the villain; cases where father and son fall in love with the same girl; and risqué situations--the representation of fire, shipwreck, and the like which served as a pretext for allowing actresses to appear naked on the stage.” Beringer

6 Commedia’s roots in Carnival
The actual carnival happens as a final feast just before Lent. The word actually means “farewell to meat.” It is the kind of feast we can find all in all times over the world – like the Indian” Holi”, the Roman “Saturnalias” or “Boruca” in Costa Rica – that puts the normal life up-side-down, where social, sexual or gender structures and hierarchies are put aside in favor of the great feast. The carnival starts with the crowning of the “King of Carnival” Jack o´Lent”, Nannu or Verde Giorgio. It could be the village fool or an actor, who then led the festivities of eating, drinking, playing, dancing in the streets, up until the point when he was accused for bringing chaos and social disorder into the community. It could take anything from a day or two to a month.

9 All with specific masks, costumes, and movements

10 Pantalone and the Doctor (two old men)
Pantalone is “somewhat stupid, fond of food and of pretty women, talkative, gullible, full of temper, the butt of all the jokes--some of them very indecent--yet forgiving in the end. His business was to get deceived by his young wife, or his son, or his servant.” The Doctor is an “absent-minded pedant, quoting Latin at inappropriate times, and enormously conceited” (Beringer for both).

12 Harlequin (arlecchino) Harlequin (or Arlecchino) always dressed in A witty servant, nimble and gay; as a lover, he was wavering. For the French, Harlequin became the beloved of French pantomimes.

13 Origins of Harlequin Harlequin, Italian Arlecchino, French Arlequin, one of the principal stock characters of the Italian Commedia dell’Arte; often a facile and witty gentleman’s valet and a capricious swain of the serving maid. In the early years of the commedia (mid-16th century), the Harlequin was a zanni (a wily and covetous comic servant), and he was cowardly, superstitious, and plagued by a continual lack of money and food. By the early 17th century, Harlequin had become a faithful valet, patient, credulous, and amorous. This last quality often led him into difficulties from which he managed to extricate himself by cleverness and irrepressible high spirits. He was amoral without being vicious, and, unlike his fellow commedia servants, he did not hold a grudge or seek revenge against those who tricked or cheated him. (Encyclopedia Britannica) Harlequin’s costume was originally a peasant’s shirt and long trousers, both covered with many coloured patches. It later developed into a tight-fitting costume decorated with triangles and diamond shapes, and it included a batte, or slapstick – which became part of the pantomime.

16 How to tell the bad guys

17 The Lovers (innamorati)
The Lovers are always young in age, possessing courteousness and gallantry. They are very attractive, and elegant in their appearance overall.[4] The women's dresses were of the finest silks and they wear showy jewelry characteristic of Renaissance style.[5] The males wear soldier-like attire, while both sexes wear extravagant wigs and also change clothes numerous times throughout the length of the production.[3] The Lovers never wear the masks which are characteristic of most of the other stock characters in the commedia dell'arte. They do, however, wear a large amount of makeup and apply beauty marks to their faces.[3] The posture that the Lovers take on is that of strong pride. They point their toes while standing and puff up their chests. Overall, they lack contact with the ground and seem to float across the ground rather than take steps.[3] Their hand movements and gestures are also very characteristic of the buoyant movements that their feet take on. (“Innamorati”)

Download ppt "Commedia dell’Arte and Eruopean theater up to One Man, Two Guvnors" 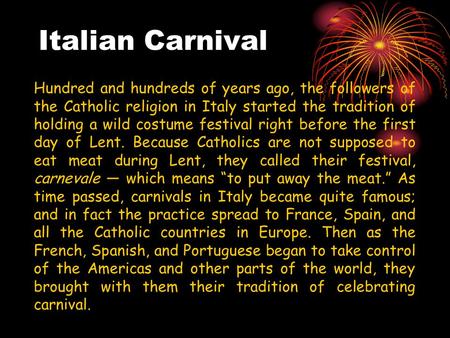 Italian Carnival Hundred and hundreds of years ago, the followers of the Catholic religion in Italy started the tradition of holding a wild costume festival. 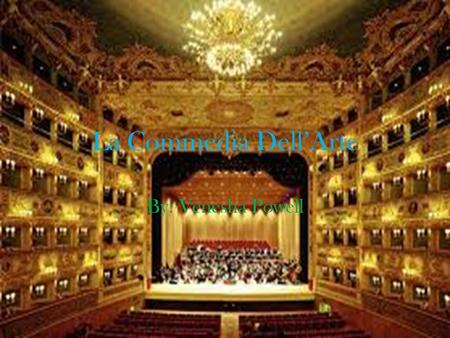 La Commedia Dell’Arte By: Venesha Powell. Where Italy- began there during the 14 th century until the 18 th and peaked in the 16 th and 17 th and then. 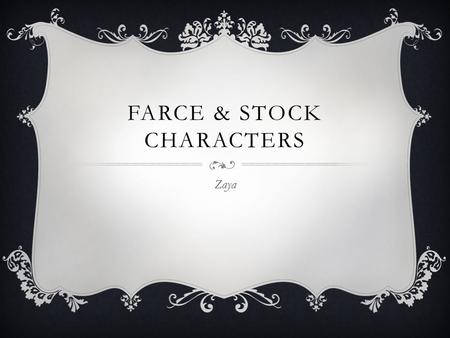 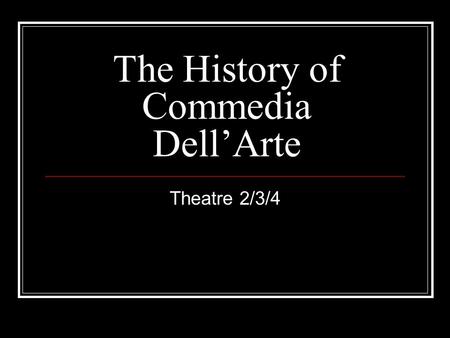 The History of Commedia Dell’Arte Theatre 2/3/4. When? Commedia was first seen in the 1500s during the Italian Renaissance. However, its true dates and. 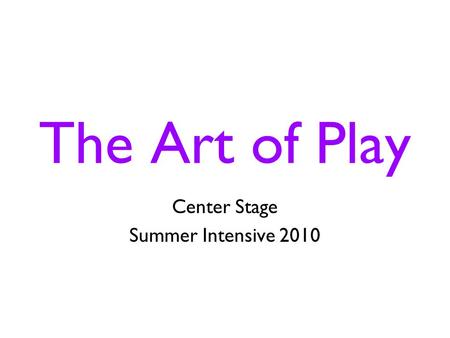 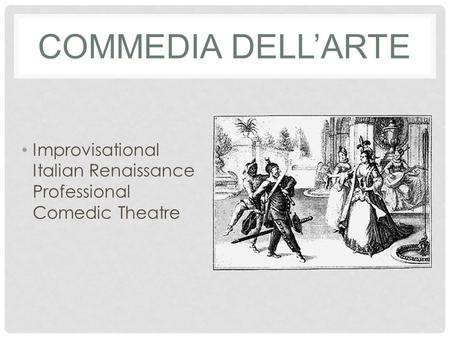 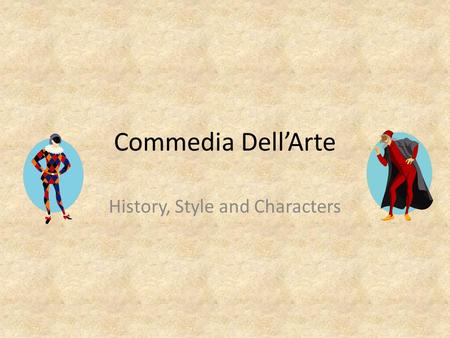 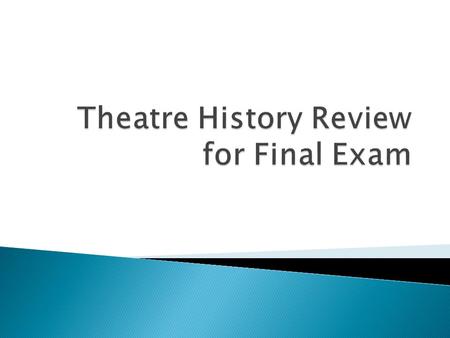  Today you will rehearse with me on stage  Each group will receive 8 minutes each day  When you are on stage – listen and be respectful  When you. 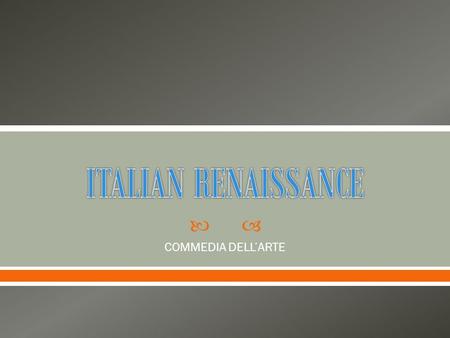  COMMEDIA DELL’ARTE. IIM PROVISATIONAL THEATER- TRAVELING TEAMS OF LAYERS WOULD SET UP AN OUTDOOR STAGE AND PROVIDE AMUSMENT IN THE FORM OF JUGGLING, 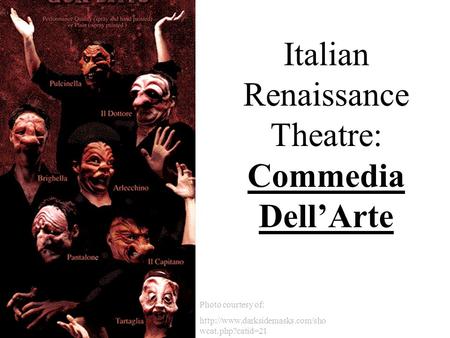 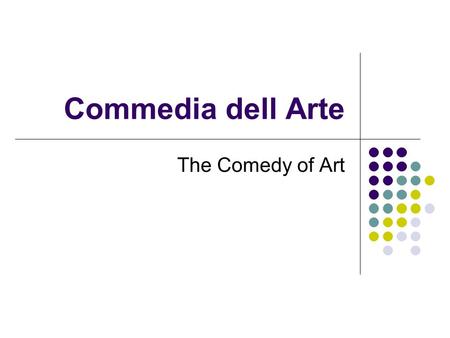 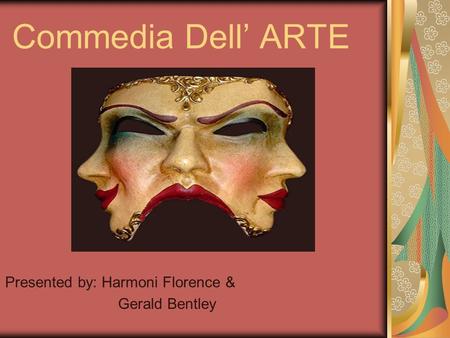 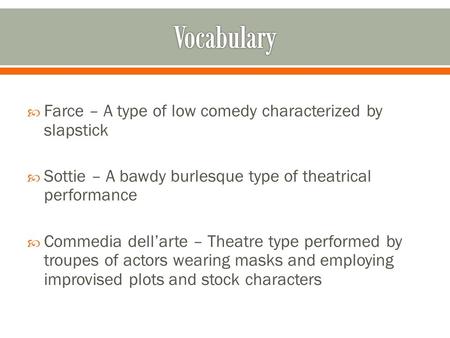 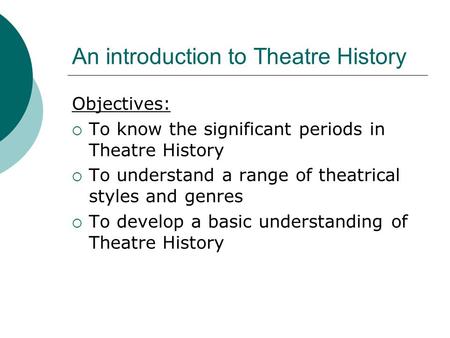 An introduction to Theatre History 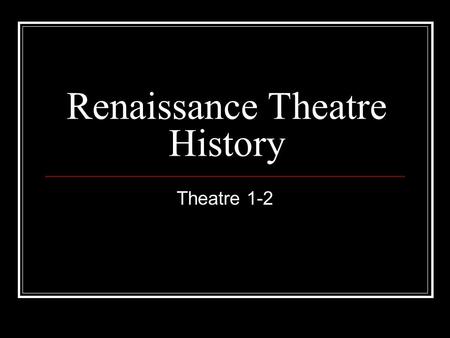 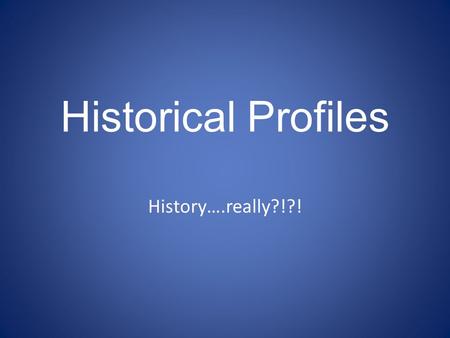 Historical Profiles History….really?!?!. What do we have to do? 1) Get assigned time period – Greece, French, Russian, American….. 2) Read through 3) 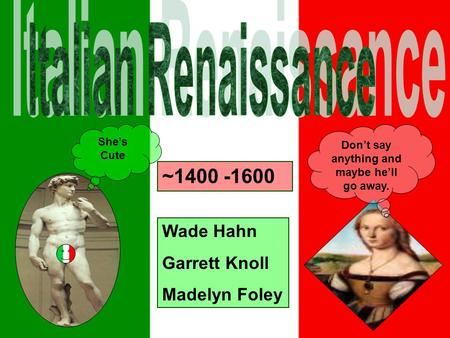 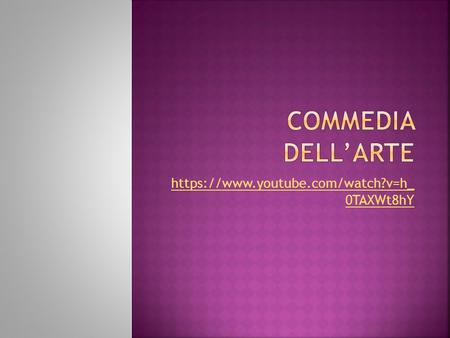 0TAXWt8hY.  Commedia was a designation given to professional comedy troupes to separate their work from that of amateur. 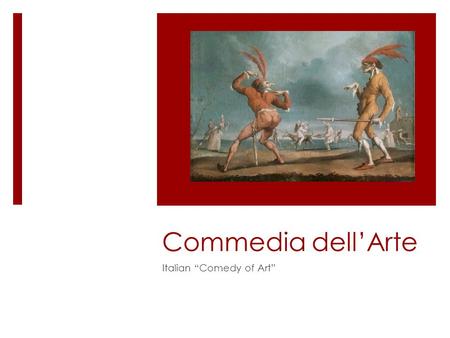 Commedia dell’Arte Italian “Comedy of Art”. Background  Commedia was a designation given to professional comedy troupes to separate their work from that. 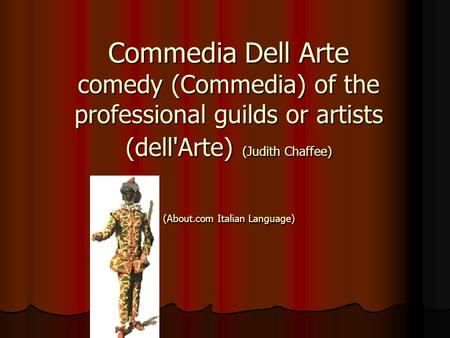