1 Energy Transfer in the Atmosphere

4 B. Heat —energy that flows from an object with a higher temperature to one with a lower temperature 1. Radiation —energy transferred in rays or waves 2. Conduction —transfer of energy when molecules bump into each other by contact

5 3. Convection —transfer of heat by the flow of a material a. Molecules move closer together, making the air more dense, and air pressure rises. b. Cold air sinks, pushing up warm air, which then cools and sinks, pushing up more warm air.

6 C. The water cycle—water moves back and forth between Earth’s atmosphere and surface 1. Energy from the Sun causes water to evaporate from the hydrosphere, and rise as vapor.

7 2. Water vapor in the atmosphere can cool and return to liquid form through condensation. a. When water vapor condenses, clouds of tiny water droplets may form. b. Water droplets collide to form larger drops.

8 3. As water drops grow, they fall back to Earth as precipitation.

11 A. Wind is the movement of air from an area of high pressure to an area of lower pressure. 1. Different areas of Earth receive different amounts of the Sun’s radiation. a. The equator’s warm air, being less dense, is pushed upward by denser, colder air. b. The pole’s cold air, being more dense, sinks and moves along Earth’s surface.

16 c. Polar easterlies blow from northeast to southwest near the north pole and from southeast to northwest near the south pole. 3. Upper troposphere— narrow belts of strong winds called jet streams a. Jet stream moves faster in the winter. b. Moves storm systems across the country.

17 C. Local wind systems— affect local weather 1. Sea breezes—a convection current blows wind from the cooler sea toward warmer land during the day 2. Land breezes—at night, air moves off the land toward the water as the land cools more rapidly than the water 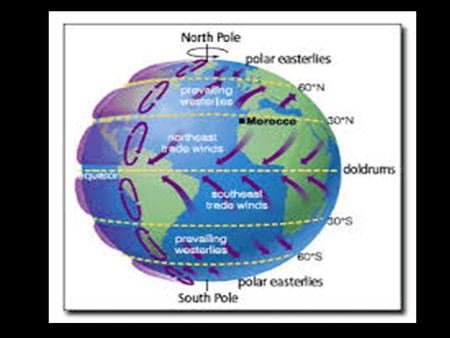 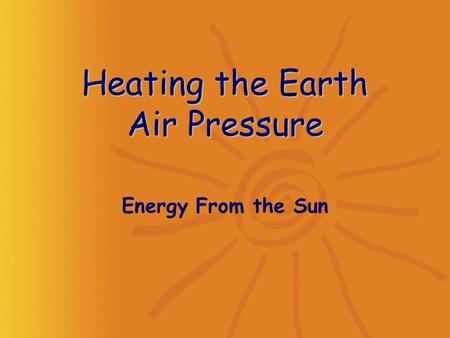 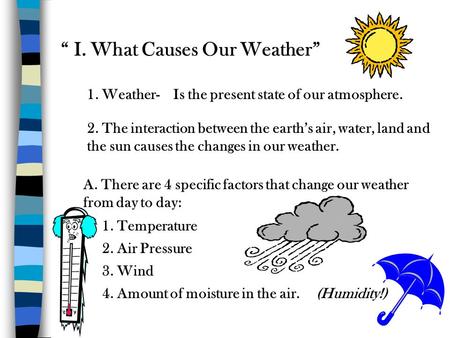