2 Chemical Bonding Bonding – attractions between atoms or ions
There are several types of chemical bonds, but we will discuss three of the strongest types 1. Covalent bonds 2. Metallic bonds 3. Ionic bonds

5 Covalent Bonds - Each shared pair represented as a line in a structural formula  Example: H - H *this is a single covalent bond **Goal of bonding is to fill the outer energy level and become stable

11 Ionic Bonds Ionic bonds usually are formed by bonding between metals and nonmetals.

13 Ionic Bonds When atoms form an ionic compound, their electrons are shifted to the other atoms, but the overall number of protons and electrons of the combined atoms remains equal and unchanged. Therefore, the compound is neutral.

14 Ionic Bonds - Ionic compounds are networks but there is a basic ratio of cations to anions  Formula unit – the basic ratio of ions Example: NaCl  1 Na : 1 Cl 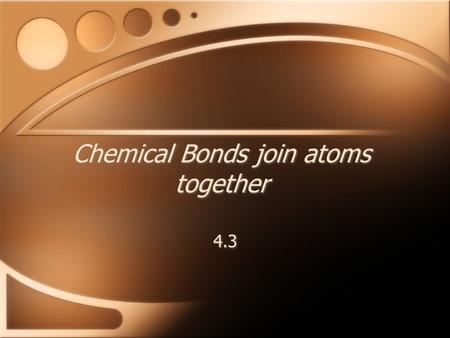