2 Climate is… The long-term weather patterns for an area.
Climate includes the annual variations of temperature, precipitation, wind, etc. Ex: NJ is cold in January, Florida is warm and wet in the summer

5 Latitude & Climates The amount of solar radiation received on Earth decreases in intensity from the equator to the poles.

7 Climates are caused by:
3) Oceanic Circulation Patterns– Water heats up and cools off slower than land Areas near water (coastal) tend to be warmer in winter and cooler in summer.

10 Climates are caused by:
4) Topography– Temperatures decrease with increased altitude The woman is wearing short sleeves, but there is snow on top of the mountain behind her.

11 Topography Orographic Lifting (high mountains)-
Moist ocean air moves up the coastal side of a mountain range. It condenses and rains or snows. Air then becomes drier as it crosses the range.

12 Other Influences on Earth’s Climate
The Sun can emit varying amounts of UV rays. More UV rays = more ozone in the stratosphere, warming the atmosphere. Volcanic Eruptions release gases and ash into the atmosphere, forming dark clouds that can block sunlight and decrease temperatures. Seasons change because the Earth’s axis is tilted. When the Earth is tilted toward the Sun (summer), the temperature increases. When the Earth is tilted away from the Sun (winter), the temperature decreases. 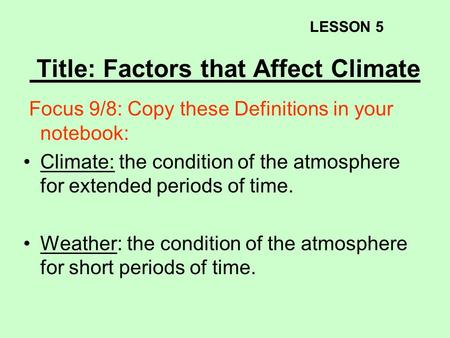