Presentation on theme: "SS6H7 The student will explain conflict and change in Europe to the 21st century. b. Explain the impact of WWII in terms of the Holocaust, the origins."— Presentation transcript:

1 SS6H7 The student will explain conflict and change in Europe to the 21st century. b. Explain the impact of WWII in terms of the Holocaust, the origins of the Cold War, and the rise of Superpowers. Origins and Consequences

2 After WWII, the Soviets did not leave the Eastern European countries that they freed. Instead, they tried to make the countries become communist. Western Europe and America were alarmed by Soviet advances in Eastern Europe. Many Europeans and Americans believed that the communists were trying to take over the world! In March 1946, Winston Churchill warns of the “Iron Curtain” of Soviet totalitarianism.

7 Stalin was a harsh dictator (absolute power); many lived in terror of him. He sent millions of serfs to prison camps in Siberia for not giving up their farms to the communist government. Much like Hitler, he also “got rid of” those who opposed his ideas. His military and secret police spread terror throughout the USSR.

10 Winston Churchill attacked the Soviet Union for creating an “Iron Curtain”. o The term reflected Churchill’s belief that communism had created a sharp division in Europe. Harry S. Truman urged his secretary of state to get tough with the Soviets. Stalin believed that the Iron Curtain was necessary to protect the Soviet Union from western attacks. o He also used this as an excuse to rebuild the military.

11 From Stettin in the Balkans, to Trieste in the Adriatic, an iron curtain has descended across the Continent. Behind that line lies the ancient capitals of Central and Eastern Europe. Sir Winston Churchill, 1946

13 1945 was the beginning of a long period of distrust & misunderstanding between the Soviet Union and its former allies in the West (particularly the US). o Soviet Union believed that a powerful central government should control the economy as well as the government. o US believed that businesses should be privately owned.

14 Both the United States and Russia were Superpowers. o Strong, wealthy countries with large populations and very strong militaries. o The U.S. and the Soviet Union were the two most powerful countries in the world—they had nuclear weapons. There was a lot of tension between the U.S. and the Soviet Union. o Many feared the rivalry between democracy and communism would lead to a nuclear war. They called this tension a “Cold War” because neither side ever fired a shot. o However, the threat of nuclear war left many feeling nervous.

15 As the Cold War continued, more countries allied with each side. The US and USSR had the ability to influence world events and project worldwide power. The countries were evenly matched…

17 The U.S.S.R. had a permanent seat on the UN Security Council. It influenced other communist countries and dictatorships around the world. It occupied the largest country in the world, 3 rd largest population, & the 2 nd largest economy. It had military and space technology, a worldwide spy network (the KGB), & one of the largest stockpiles of nuclear weapons in the world.

18 The US also had a permanent seat on the UN Security Council, as well as strong ties with Western Europe & Latin America. 4 th most populated country It had powerful military support from NATO, the largest navy in the world, bases all over the world, the CIA, and a large reserve of nuclear weapons.

19 Each side thought the other was trying to rule the world. Neither side would give up, and people lived in fear that another world war would erupt. This time it could be a nuclear war, which could destroy the entire planet… Countries began to form alliances to protect themselves.

21 In 1949, Western European countries, Canada, & US formed the North Atlantic Treaty Organization (NATO). Each nation in NATO believed the Soviet Union would not attack western Europe if the U.S. would launch nuclear war in return.

26 At the end of WWII, the Allies divided Germany into 4 sections to keep it from regaining power. o US, Great Britain, France, & Soviet Union each controlled a section. In 1948, the Western Allies wanted to reunite Germany, but the Soviets disagreed. o The Soviet section became “East Germany” and the reunited sections became “West Germany.” o Berlin was also divided into East & West.

28 During the Cold war, there were many “hot spots” (areas of extreme tension). o The earliest hot spot was Berlin. At the end of World War II, Germany was divided into four occupation zones: o American, British, French, and Soviet The Soviets controlled the eastern part of Germany, the western countries controlled the western part of Germany. The capital, Berlin, deep within Soviet-controlled territory, was also divided into four occupation zones.

30 In June 1948, the Soviets blockaded all land and water traffic into western Berlin hoping to make Britain, France, and America leave the city. (Remember Berlin was in East Germany which the USSR occupied.) In response, the United States and Great Britain began an airlift…

32 What’s an airlift? o A system of carrying supplies into East Berlin by plane day and night. British and American pilots flew in tons of food, fuel, and raw materials. How long did it last? o 11 months

37 Berliners hated living under communism. Luckily, West Berlin and freedom were just across the street. o About 3 million people fled to West Berlin looking for political freedom and better lives. o The East German government wanted it to stop. In August 1961, East Germany built a 103 mile wall between East and West Berlin. o Guarded by Soviet troops, it became a symbol of the split between western and eastern Europe.

42 While the crisis in Berlin ended without an all out war, there were numerous “hot” spots” during the Cold War. Korea Vietnam Cuban Missile Crisis

43 Nikita Khrushchev was born in 1894 to a miner in Ukraine. His grandfather was a serf. He served as the First Secretary of the Communist Party of the Soviet Union from 1953-1964. o He initiated the space program that launched Sputnik I. o He had the idea of placing nuclear missiles in Cuba to restore the balance of power during the Cold War. This led to the Cuban Missile Crisis. o His announced goals were to overtake the United States in o productivity and to help spread communism throughout the world. Khrushchev was overthrown in 1964. After seven years of house arrest, he died in Moscow in 1971.

44 Premier Nikita Khrushchev About the capitalist states, it doesn't depend on you whether we (Soviet Union) exist. If you don't like us, don't accept our invitations, and don't invite us to come to see you. Whether you like it our not, history is on our side. We will bury you. -- 1956

45 Paris, 1961 Khrushchev & JFK meet to discuss Berlin and nuclear proliferation. Khrushchev thinks that JFK is young, inexperienced, and can be pushed over.

46 The Soviet economy did not grow; the government spent too much money on heavy industry. This often caused food shortages as well as shortages in basic necessities like shoes. By the 1980s, most Soviet people had lost faith in the communist system. They had no personal freedoms – freedom of speech, religion, right to travel freely, free press…..

47 Soviet Union was spending tons of money putting down revolts, protecting its borders, and keeping up with the US in the arms race. In 1985, the economy was so unstable that Mikhail Gorbachev, head of USSR, reduced government control of business and increased the freedoms for all citizens.

48 Demonstrations by people prompted the government to remove border-crossing restrictions. o When the announcement was made, East and West Berliners climbed the wall and celebrated. o Citizens immediately began tearing down the wall. Nov. 9 th 1989: the Berlin Wall, a symbol of communism, was destroyed. o Shortly after the Berlin Wall fell, Germany was reunited as one country (October 3, 1990).

51 Shortly after the Berlin Wall fell, Germans voted to make the countries of East Germany and West Germany one again. They reunited as one country on October 3, 1990. Today, Germany is a free democracy with a great economy.

52 After Germany was reunified, the Soviet republics that had once been separate countries began seeking their independence also. In 1991, Soviet Union was no more and the Cold War finally ends. Many countries were created; Russia was the largest.

Download ppt "SS6H7 The student will explain conflict and change in Europe to the 21st century. b. Explain the impact of WWII in terms of the Holocaust, the origins." 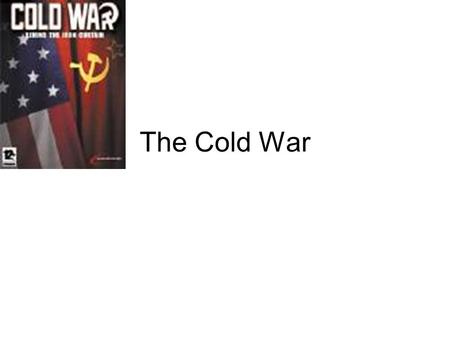 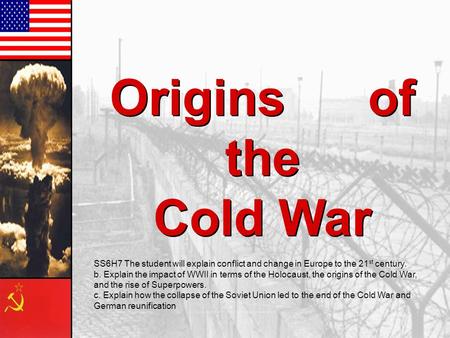 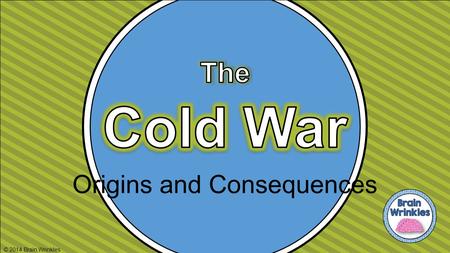 Origins and Consequences © 2014 Brain Wrinkles. Standards SS5H7 The student will discuss the origins and consequences of the Cold War. a. Explain the. 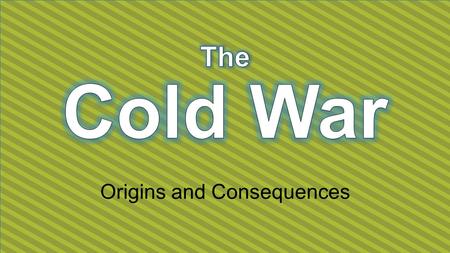 Origins and Consequences. Teachers: The next 3 slides are handouts for the students to use for note-taking during (or after) the presentation. You can. 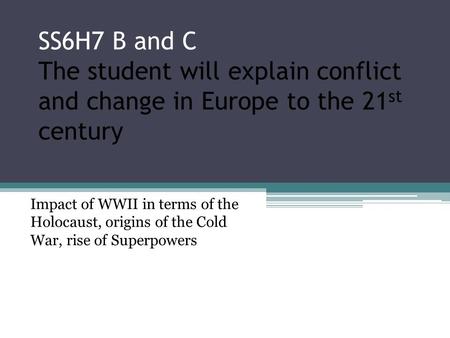 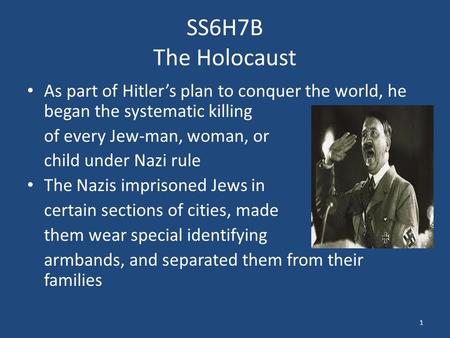 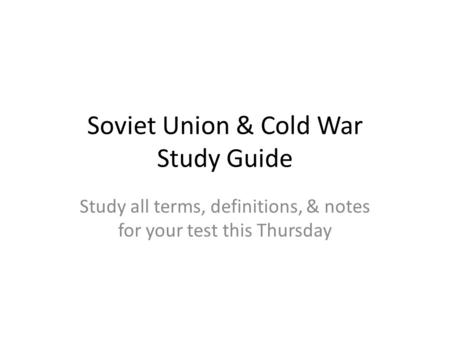 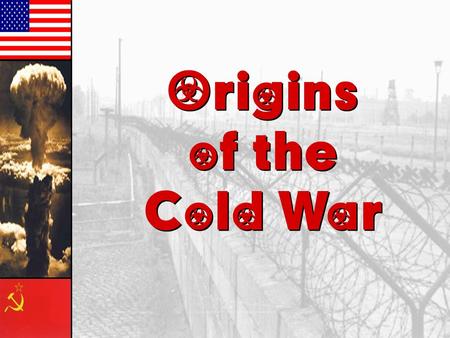 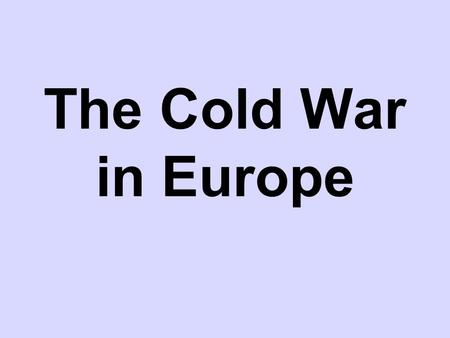