2 HEMOLYTIC ANEMIAS – THE HEMOGLOBINOPATHIES Hemolytic anemias are a heterogenous group of normochromic, normocytic anemias (except for the thalassemias) in which the RBC survival time is decreased. The premature destruction may result from intrinsic abnormalities of the RBCs or abnormalities extrinsic to the RBC. Reticulocytosis is a constant feature.

3 HEMOLYTIC ANEMIAS – THE HEMOGLOBINOPATHIES Remember that the life span of the RBC can decrease to about 18 days before increased erythropoiesis in the bone marrow is unable to compensate. Hemoglobinopathies are a type of intracorpuscular defect leading to the production of an abnormal hemoglobin or to an aberration of hemoglobin synthesis Abnormal hemoglobins Most are clinically insignificant with no physiologic consequence

4 HEMOLYTIC ANEMIAS – THE HEMOGLOBINOPATHIES Most abnormalities occur in the beta chain with abnormalities in this chain more likely to cause disease because we have only two genes that encode the beta chains, but we have four genes that encode the alpha chains. Most variants arise from the substitution of a single amino acid in the  globin chain.

5 HEMOLYTIC ANEMIAS – THE HEMOGLOBINOPATHIES Changes may also arise from multiple substitutions, insertions or deletions, frame shift mutations, cross-overs, and fusions of subunits. If an individual is homozygous for a structural gene in the beta chain, the individual is said to have the disease or anemia If the individual is heterozygous, they are said to have the trait, and 50% or less of the hemoglobin will be abnormal. The % of abnormal hemoglobin is usually less than 50% because the  chain will preferentially bind with the normal  chains.

6 HEMOLYTIC ANEMIAS – THE HEMOGLOBINOPATHIES Sickle cell disease Hemoglobin S – position 6 on the  chain has a valine (nonpolar) substituted for the normal glutamic acid (polar) Carriers of the gene in Africa may be as high as 20- 40% because when parasitized by Plasmodium (causes malaria), cells containing hgbS will sickle quickly, either killing the parasite or causing RBCs to be sequestered in the spleen and destroyed. Therefore, having the gene provides a certain protection against malaria. It is usually only in the homozygous state that the disease is so devastating 8-10 % of African Americans are carriers in the U.S., with.3-1.3 % being homozygous

8 HEMOLYTIC ANEMIAS – THE HEMOGLOBINOPATHIES Pathophysiology of the disease When oxygenated, Hgb S is soluble When oxygen tension decreases, hgb S in the deoxyhemoglobin state polymerizes into insoluble aggregates leading to sickled cells This leads to increased blood viscosity which leads to decreased circulation and increased exposure to low oxygen. This, in turn, leads to more sickling The small microvasculature may become clogged with the rigid sickle cells leading to hypoxia and infarction of organs and a “sickle cell crisis”.

10 HEMOLYTIC ANEMIAS – THE HEMOGLOBINOPATHIES Upon reoxygenation, the RBC may return to its original shape However, repeated sickling damages the permeability of the RBC membrane leading to premature death of the cell In addition, after repeated sickling events, the cells become irreversibly sickled and are removed by the spleen Early in childhood, the spleen loses its function due to splenic atrophy and necrosis from repeated ischemic (blood supply decreased due to blockage of the small vasculature) crises. Thus, these young patients are more prone to infections, especially from encapsulated microorganisms. The liver and bone marrow then take over destruction of abnormal cells.

11 HEMOLYTIC ANEMIAS – THE HEMOGLOBINOPATHIES Hgb S has a decreased affinity for oxygen, leading to a shift to the right in the oxygen dissociation curve. This, however, creates more deoxyhemoglobin, and hence, more sickling Clinical findings The disease is diagnosed early at about 6 months of age when hemoglobin F is replaced with hgb S rather than hgb A. Homozygous individuals frequently do not live beyond middle age (improved healthcare has increased the life expectancy of these individuals) Chronic hemolytic anemia – due to extravascular hemolysis. RBC survival may decrease to 14 days Increased bilirubin turnover leads to gallstones

12 HEMOLYTIC ANEMIAS – THE HEMOGLOBINOPATHIES Compensation mechanisms lead to cardiac hypertrophy and enlargement and eventual failure The hyperplastic bone marrow leads to thinning of the bones Hematologic complications that may occur are called crises. Three types of crisis may occur Aplastic – usually associated with infection and results in temporary marrow aplasia due to overwork Hemolytic crisis – sudden acute anemia – in young children this may be due to splenic pooling Vaso-occlusive or painful – plugs of rigid sickle cells in the capillaries cause tissue damage and necrosis and lead to organ dysfunction. This is the “hallmark” of sickle cell disease.

18 HEMOLYTIC ANEMIAS – THE HEMOGLOBINOPATHIES Hemoglobin C disease Lysine is substituted for glutamic acid at position 6 on the  chain. Hgb C has decreased solubility and in the deoxyhemoglobin state, the RBCs form intracellular crystals leading to a rigid RBC with a decreased survival time (33-35 days). The disease is usually asymptomatic although patients may have joint or abdominal pain. This disease is common in Africa.

22 HEMOLYTIC ANEMIAS – THE HEMOGLOBINOPATHIES Hgb C trait – is symptomless S/C disease Both  chains are abnormal Therefore, hgb A is absent and the disease is almost as severe as in hgb S disease Clinical symptoms are similar to those of mild sickle cell anemia The patient may develop a vaso-occlusive crisis Differential diagnosis of S/C from hgb S disease may be made on the finding of prominent splenomegaly in S/C disease. Why is this not seen in hgb S disease?

25 HEMOLYTIC ANEMIAS – THE HEMOGLOBINOPATHIES Hgb D disease and trait A glutamine replaces glutamic acid at position 121 on the  chain Both homozygous and heterozygous states are asymptomatic When combined with S to form D/S, D potentiates the polymerization of deoxyhemoglobin leading to sickling and mild anemia. Hgb E disease and trait

26 HEMOLYTIC ANEMIAS – THE HEMOGLOBINOPATHIES A glutamic acid replaces lysine at position 26 on the  chain leading to a slightly unstable hemoglobin with oxidant stress. Hgb E has a decreased affinity for oxygen leading to a shift to the right in the oxygen dissociation curve This is found mainly in individuals from the Orient Homozygous individuals have a mild microcytic anemia with decreased RBC survival, target cells and increased osmotic fragility Heterozygous individuals are symptomless Unstable hemoglobin disorders Contain amino acid changes in internal portions of he hgb chains leading to decreased stability They are characterized by precipitation of the abnormal hgb as Heinz bodies which leads to increased cell rigidity, membrane damage, and RBC hemolysis.

28 HEMOLYTIC ANEMIAS – THE HEMOGLOBINOPATHIES Amino acid substitutions in the globin chains close to the heme pocket may affect the ability of the hemoglobin to carry oxygen This also occurs with substitutions near the 2, 3 DPG binding site Decreased hgb affinity for oxygen leads to the shift to the right in the oxygen dissociation curve Increased oxygen affinity leads to a shift to the left in the oxygen dissociation curve and to polycythemia Hgb M variants Are characterized by permanent methemoglobin formation because iron is stabilized in the Fe +3 state

29 HEMOGLOBINS WITH ALTERED AFFINITY FOR OXYGEN 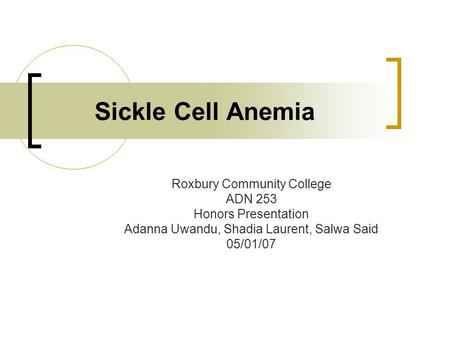 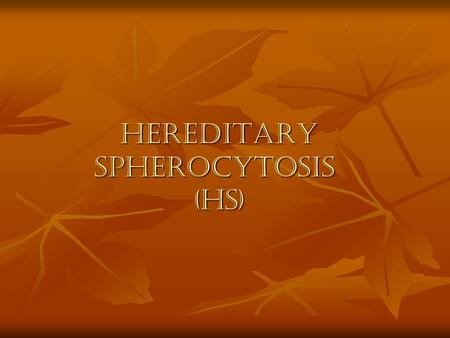 HEREDITARY SPHEROCYTOSIS (HS). Introduction Hereditary spherocytosis is a class of hemolytic anemia. The disease occurs due to an intrinsic “membrane. 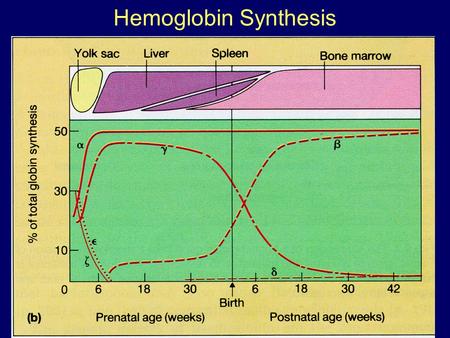 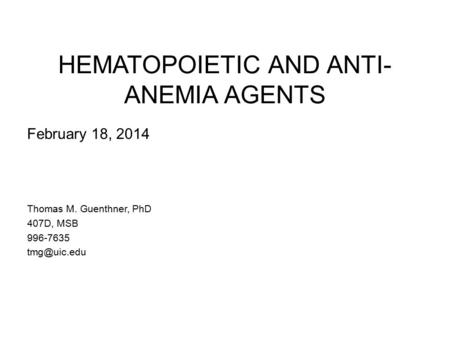 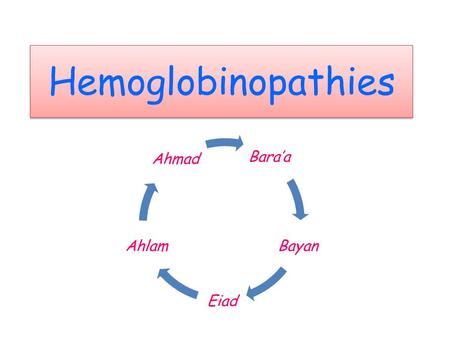 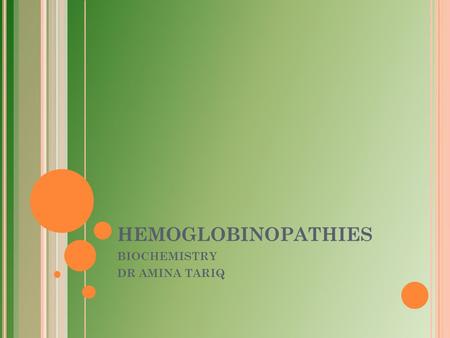 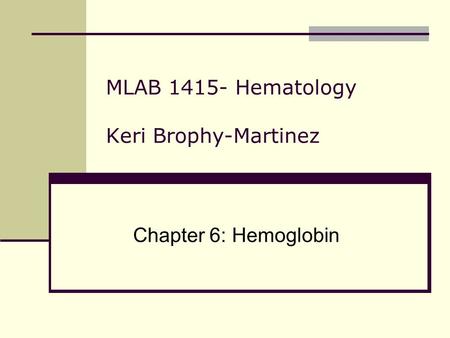 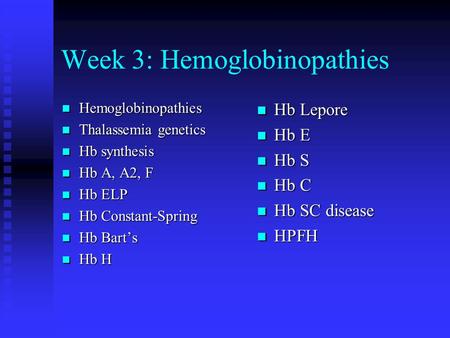 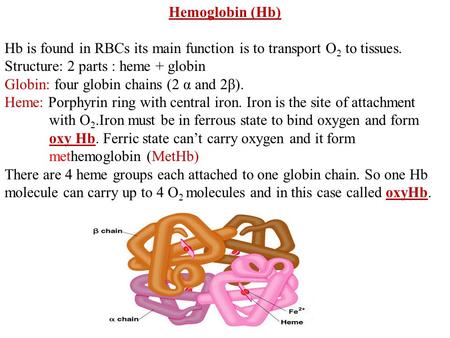 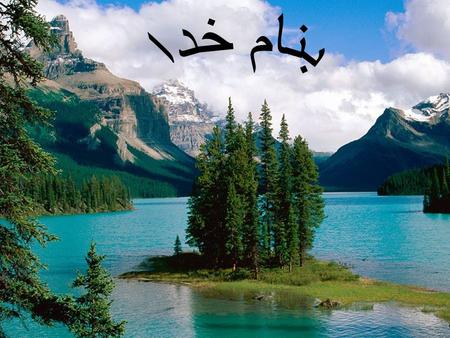 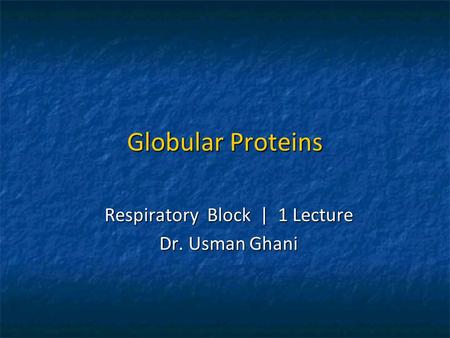 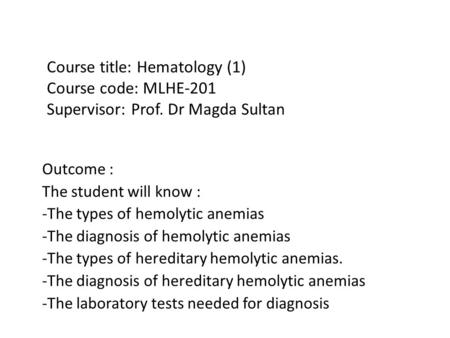 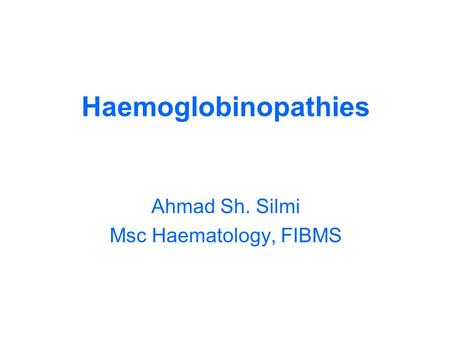 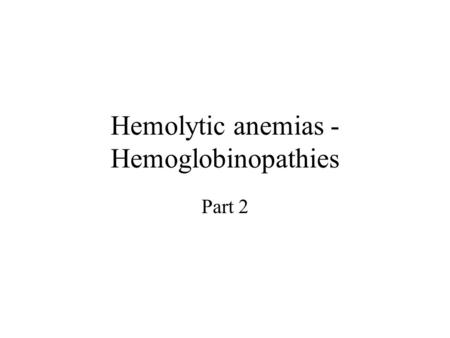 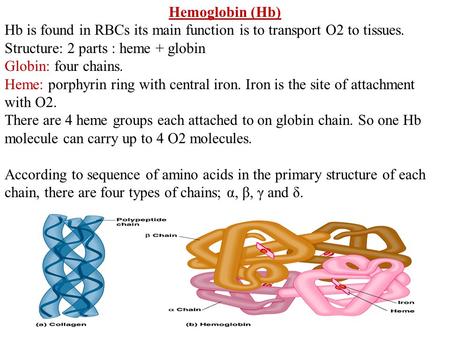 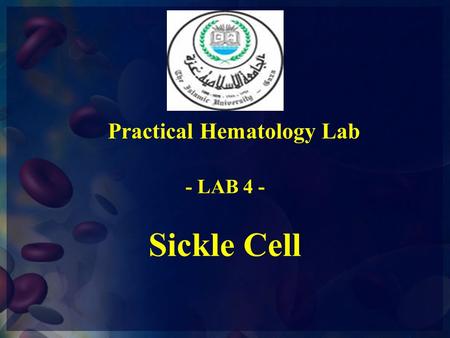 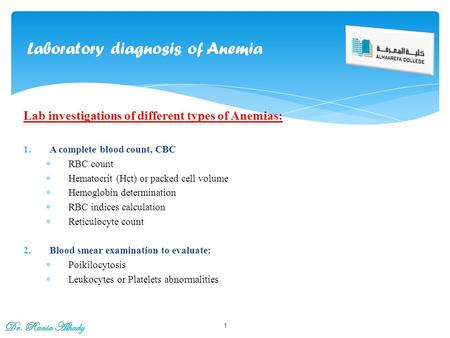 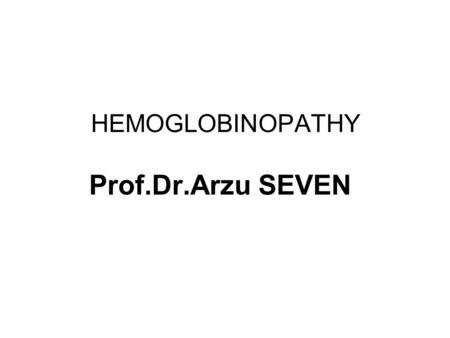 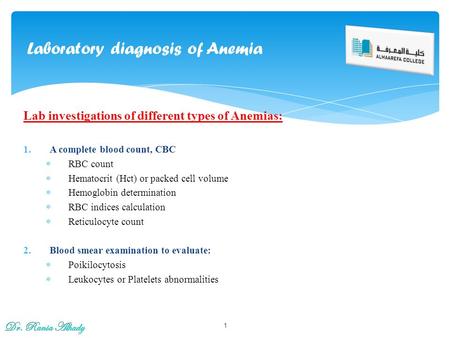