2 Introduction Serving as the framework of national government and the source of American citizens’ basic rights, the Constitution is the most important document of the United States. To preserve self government, all citizens need to understand their rights and responsibilities.

4 Popular Sovereignty and Republicanism
People consent to be governed and specify the powers and rules by which they shall be governed Put the above phrase in your own words. A system of interlocking responsibilities creates limited power Voters have the ultimate authority to elect or not re-elect representatives

5 Limited Government Articles I, II, and II of the Constitution describe the powers of the federal government and the limits of those powers Other limits are set forth in the Bill of Rights

11 How a Bill Becomes a Law 1. Member of Congress introduces bill, referred to committee for review. 2. Committee decides to shelve it or send it back for revisions. 3. House or senate debates bill and can make revisions. If bill is passed, it is sent to other house 4. House and Senate meet to compromise if they both pass a similar bill. 5. Compromise bill is then sent to both houses. 6. If both houses pass the bill, it is sent to the president to sign. 7. If president signs it becomes the law 8. President may also veto bill 9. If House and Senate can garner 2/3 vote they can overrule president

12 The Executive Branch The President’s Role
Chief Executive – responsible to carry out the nation’s laws Commander in Chief – directs military operations, can send troops to other nations for up to 60 days, may remain longer only if Congress declares war. Chief of State - Symbolic representative of all Americans Legislative Leader – proposes laws and presents his goals in the annual State of the Union address. Appoints the leaders of 15 Executive Cabinets

13 The Judicial Branch District and Appellate Courts US Supreme Court
94 District Court – at least one in every state Here federal issues such as tax evasion, kidnapping, and free speech Appellate Courts her appeals of a verdict US Supreme Court Final authority in the federal court system Chief justice and eight associates Court Independence – president appoints justices for life and senate confirms appointments, public has no input. Judicial Review – ultimate authority to interpret the constitution

14 Rights and Responsibilities as protected by the Constitution
The Rights of Americans Protection from Unfair Actions Right to a lawyer, trial by jury, protection from unreasonable search and seizures Equal Treatment Right to be treated under same law 5th Amend provides due process – no person shall “be deprived of life, liberty, or property, without due process of law.” 14th Amend provides equal protection of laws

15 Rights and Responsibilities Cont..
Basic Freedoms Described in First Amendment Freedom of speech, religion, press, and the right to petition Allows citizens to criticize the government to an extent, in speech or in the press, without the fear of punishment. Limit on Rights Rights are not absolute Limited based on the principle of respecting each others rights Many cities require groups to obtain a permit to march. The goal is to create a balance between citizens rights and the rights of the government.

16 Citizens Duties & Responsibilities
One basic duty of all American is to obey the law Laws serve three functions 1) Maintain order 2) They protect health, safety, and property of all citizens 3) Make it possible for people to live together peacefully Americans are required to pay taxes Taxes are used to defend the nation, build roads and bridges, and to assist people Defend the Nation All males 18 or older must register with the government Trial by Jury – All Americans have the right to trial by jury People 18 and older can be called to jury duty Education – Schools require citizens to attend school to a certain age.

17 Citizens Duties and Responsibilities Cont...
Active citizens Informed of local, state, and national issues Being informed helps citizens maintain a responsible and responsive government Respecting the Rights of Others Our democracy also supports respecting others regardless of race, religion, beliefs or other differences Voting Allows one to participate and guide the government Citizens can also directly contact their local, state and national representatives. 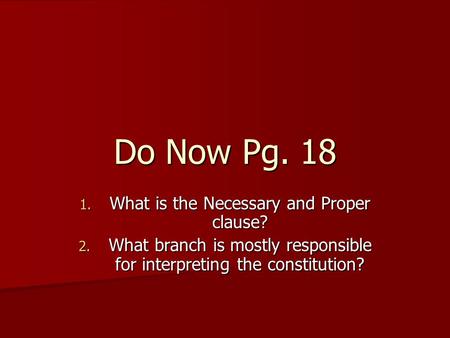 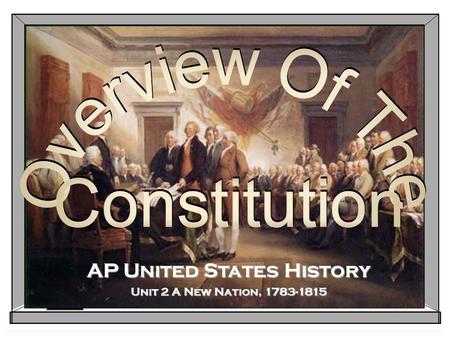 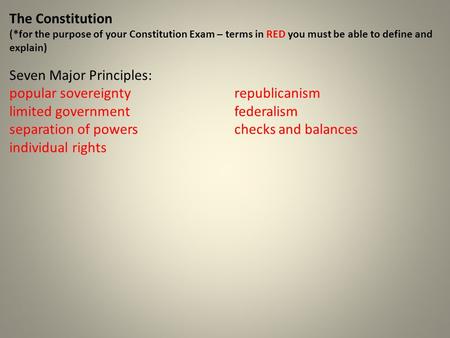