2 Probability: The Mathematics of Chance The Mean and Standard Deviation of a Probability Model
Mean of a Continuous Probability Model Suppose the area under a density curve was cut out of solid material. The mean is the point at which the shape would balance. Law of Large Numbers As a random phenomenon is repeated a large number of times: The proportion of trials on which each outcome occurs gets closer and closer to the probability of that outcome, and The mean ¯ of the observed values gets closer and closer to μ. (This is true for trials with numerical outcomes and a finite mean μ.) x 2

5 Experimental Probability Terminology
Number of Trials – the total number of times the experiment is repeated. The outcomes – the different results possible for one trial of the experiment. Frequency – the number of times that a particular outcome is observed. Relative Frequency – the frequency of an outcome expressed as a fraction or percentage of the total number of trials. **experimental probability = relative frequency**

7 Example We roll two dice and record the up-faces in order (first die, second die) What is the sample space S? What is the event A: “ roll a 5”?

9 Probability Models Give me the sample space for: Flipping two coins.

12 2-D Grids: 3. Illustrate the possible outcomes when tossing a coin and rolling a die.

14 Theoretical Probability
For fair spinners, coins or die (where a particular outcome is not weighted) the outcomes are considered to have an equal likelihood. For a fair dice, the likelihood of rolling a 3 is the same as rolling a 5… both 1 out of 6 This is a mathematical (or theoretical) probability and is based on what we expect to occur. A measure of the chance of that event occurring in any trial of the experiment

17 Theoretical Probability Examples
A ticket is randomly selected from a basket containing 3 green, 4 yellow and 5 blue tickets. Determine the probability of getting: A green ticket A green or yellow ticket An orange ticket A green, yellow or blue ticket

19 Warm-Up Have your homework out on your desk.

21 More Grids to Find Probabilities
Use a two-dimensional grid to illustrate the sample space for tossing a coin and rolling a die simultaneously. From this grid determine the probability of: Tossing a head Getting a tail and a 5 Getting tail or a 5

22 More Grids to Find Probabilities (cont.)
2 circular spinners, each with 1 – 10 on their edges are twirled simultaneously. Draw a 2D grid of the possible outcomes and use your grid to determine the probability of getting A 3 with each spinner A 3 and a 1 An even result for each spinner Spinner

28 4. Two events that have nothing in common are called:
A. inconsistent B. mutually exclusive C. complements D. Both A and B

31 Warm-Up Create a tree diagram. When you go to a restaurant you have a choice for three course meals your 4 salad choices, 6 entrees, and 5 dessert choices. How many possible outcomes are there?

32 Independent Events Events where the occurrence of one of the events does not affect the occurrence of the other event. In general, if A and B are independent events, then P(A and B) = P(A) x P(B) Ex: a coin and a die are tossed simultaneously. Determine the probability of getting a head and a 3 without using a grid.

36 Dependent Events Think About It: A hat contains 5 red and 3 blue tickets. One ticket is randomly chosen and thrown out. A second ticket is randomly selected. What is the chance that it is red? Not independent; the occurrence of one of the events affects the occurrence of the other event. If A and B are dependent events then P(A then B) = P(A) x P(B given that A has occurred)

38 Examples (cont.): A hat contains tickets with numbers 1 – 20 printed on them. If 3 tickets were drawn from the hat without replacement, determine the probability that all are prime numbers.

39 Examples (cont.): A box contains 3 red, 2 blue and 1 yellow marble. Draw a tree diagram to represent drawing 2 marbles. With replacement Without replacement Find the probability of getting two different colors: If replacement occurs If replacement does not occur

40 Examples (cont.): A bag contains 5 red and 3 blue marbles. Two marbles are drawn simultaneously from the bad. Determine the probability that at least one is red.

43 Z Is it a fair game? A marble is picked from the container by the teacher If its red the girls get a point, if its blue the boys get a point

46 Warm Up Get your homework out.
A box contains 4 red marbles, 5 blue marbles and 1 green marble. We select 2 marbles without replacement. Determine the probability of getting: At least 1 red marble One green and one blue marble

47 Sets & Venn Diagrams A Venn diagram consists of a rectangle which represents the sample space and at least 1 circle within it representing particular events.

48 Examples The Venn diagram represents a sample space of students. The event E, shows all those that have blue eyes. Determine the probability that a student Has blue eyes

49 Examples (cont.) Draw a Venn diagram and shade the regions to represent the following: 1. In A but not in B 2. Neither in A nor B

50 denotes the union of the sets A and B.
A or B or both A and B. denotes the intersection of sets A and B. All elements common to both sets. Disjoint sets do not have elements in common. So A and B are said to be mutually exclusive.

53 Examples (cont.) In a class of 30 students, 19 study Physics, 17 study Chemistry and 15 study both. Display this in a Venn diagram and find the probability that a student studies: Both At least 1 of the subjects Physics, but not Chemistry Exactly one of the subjects Neither Chemistry given that the student also studies physics

56 Mutually Exclusive Events
If A and B are mutually exclusive the intersection is the empty set and equals 0. So the law becomes: Example: A box of chocolate contains 6 with hard centers (H) and 12 with soft centers (S). Are H and S mutually exclusive? Find P(H ∩ S) Find P(H U S)

57 Laws of Probability (cont.)
Conditional Probability (dependent events): A | B represents “A occurs knowing B has occurred” It follows that:

59 Example (cont.) Box A contains 3 red and 2 white tickets. Box B contains 4 red and 1 white. A die with 4 faces marked A and 2 faces marked B is rolled and used to select a box. Then we draw a ticket. Find the probability that: The ticket is red The ticket was chosen from B given it is red. 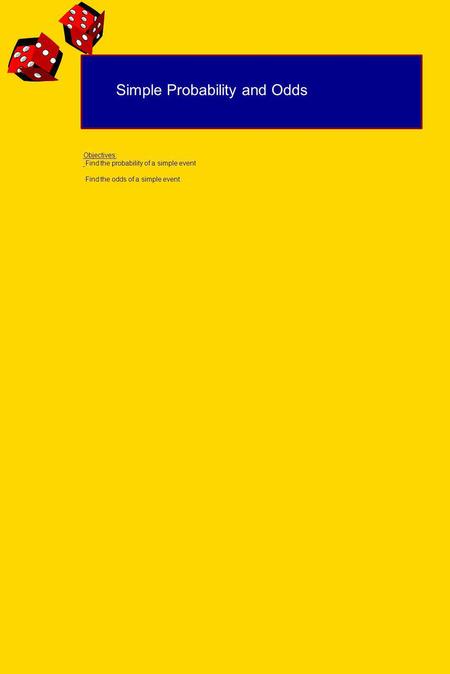 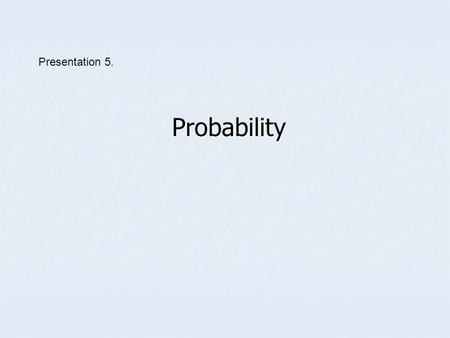 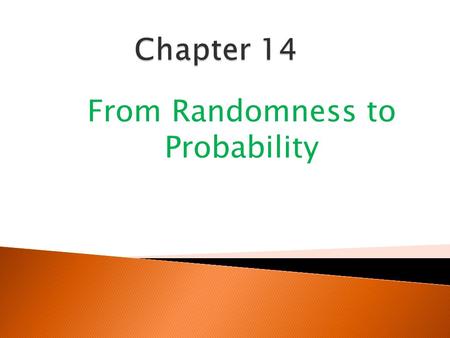 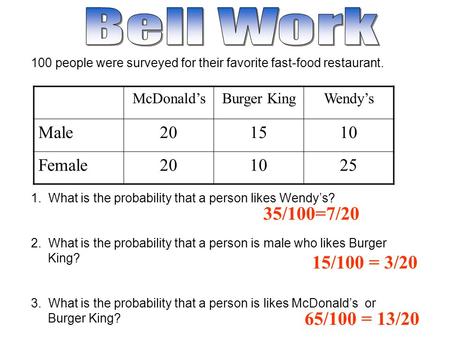 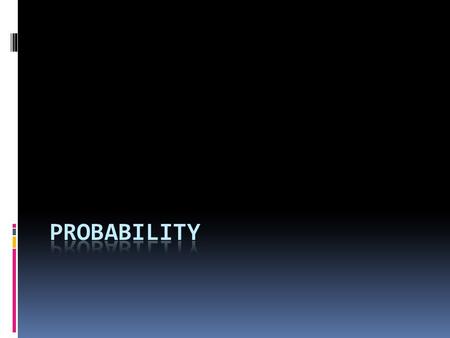 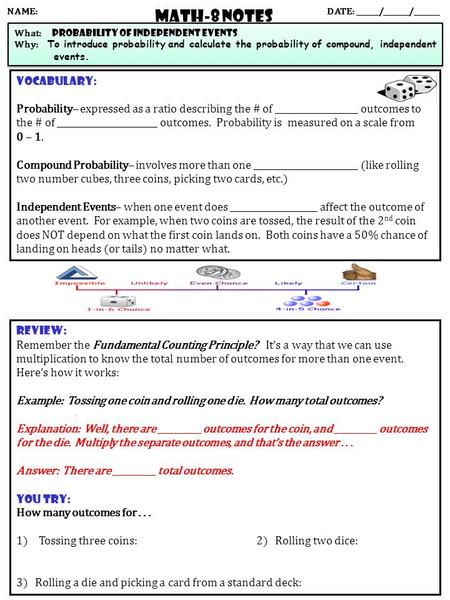 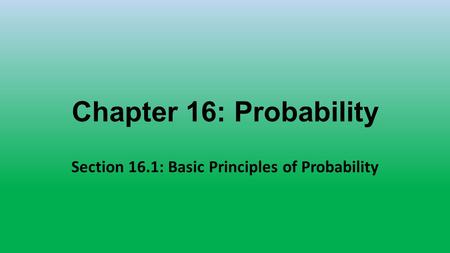 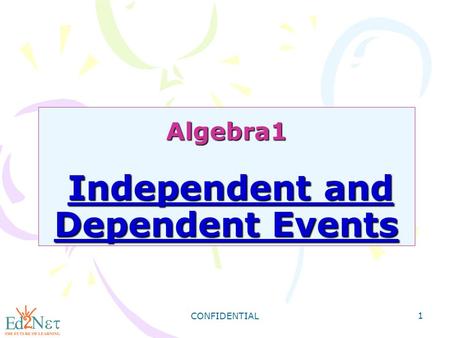 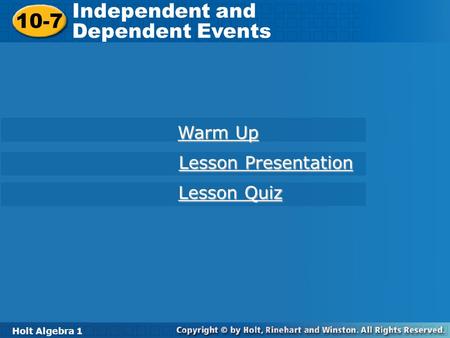 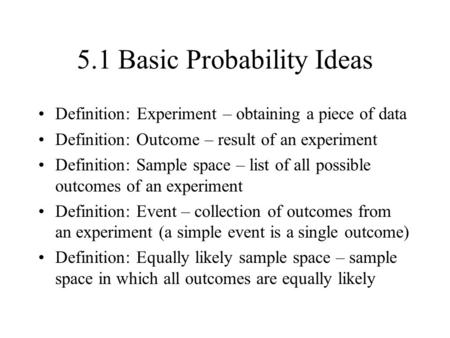 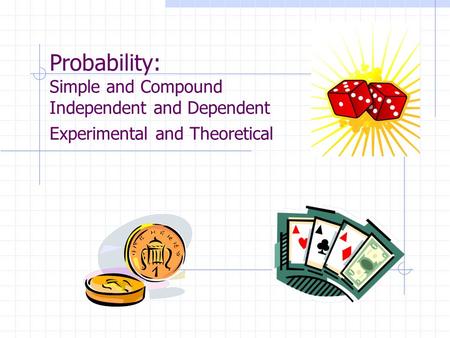 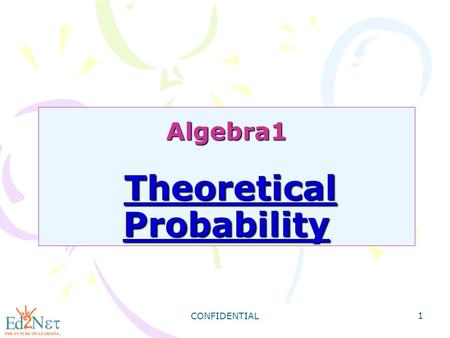 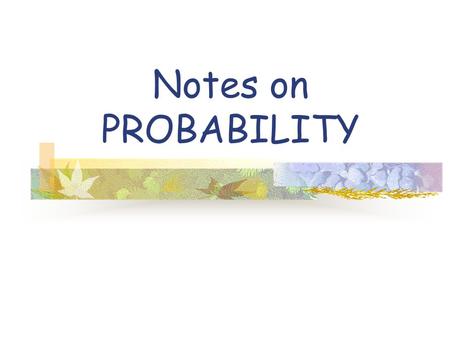 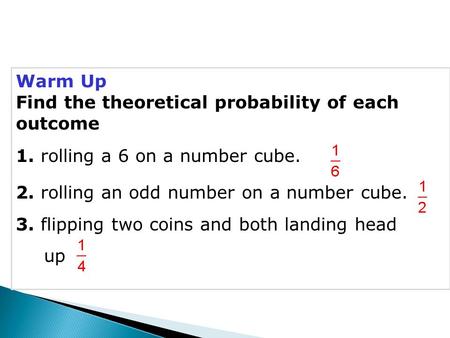 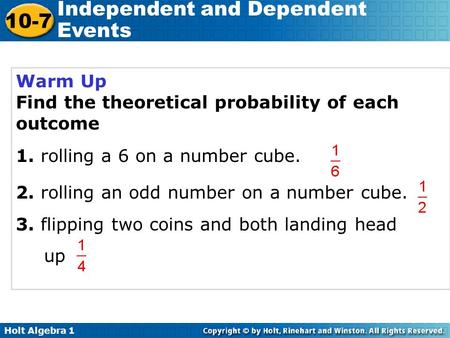 Warm Up Find the theoretical probability of each outcome 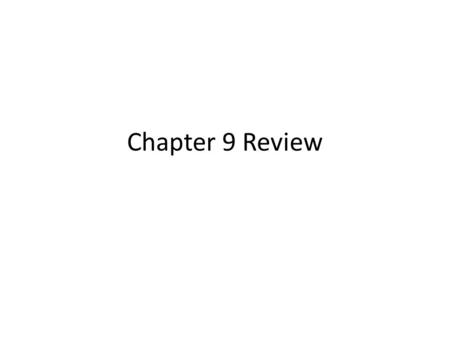 Chapter 9 Review. 1. Give the probability of each outcome. 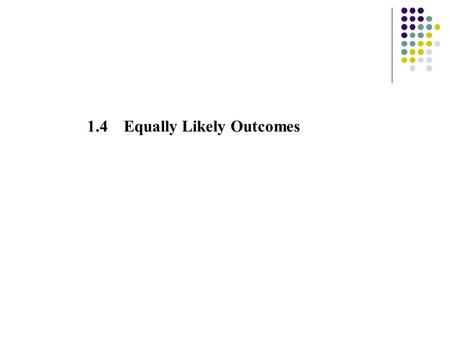 1.4 Equally Likely Outcomes. The outcomes of a sample space are called equally likely if all of them have the same chance of occurrence. It is very difficult. 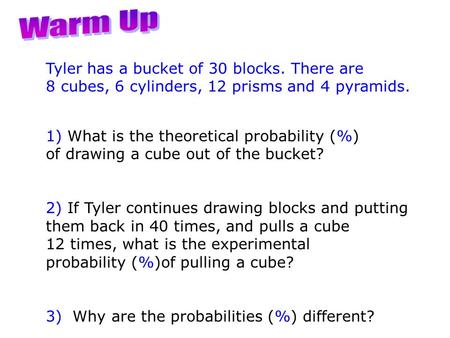 Warm Up Tyler has a bucket of 30 blocks. There are 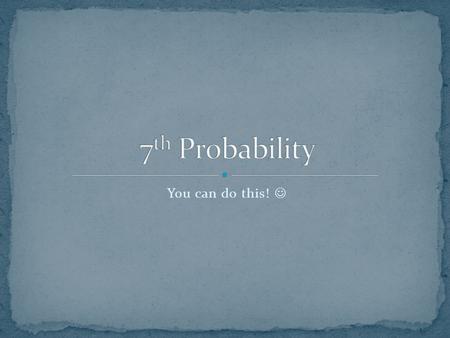 7th Probability You can do this! .