2 setting The time, place, and atmosphere of a story including… geographical location (London, Texas, the Caribbean, etc.) time period (1904, WWII, the 60’s, etc.)

4 setting can also be used to tell the reader about the character, atmosphere, and to “set up” the the story

5 characters The people, animals, things, force, etc., appearing in a literary work… protagonist – main character antagonist - the character or force in conflict with the protagonist

6 characters round character – shows many different traits, good and bad dynamic character – develops and grows during the course of a story

11 plot exposition – introduces the characters, setting, and the basic situation rising action – all the events leading up to the climax climax – the high point of interest or suspense

13 plot inciting incident – introduces the central conflict; occurs after the exposition and before the rising action

18 point of view The perspective from which a story is told 1 st person narrator – a character tells the story; can be main or minor character

21 point of view *** with 3 rd -person limited, other characters thoughts and feelings are revealed through their dialogue and actions

24 imagery Descriptive or figurative language used to create word pictures for the reader; will appeal to any or all of the five senses (sight, sound, taste, touch, & smell) 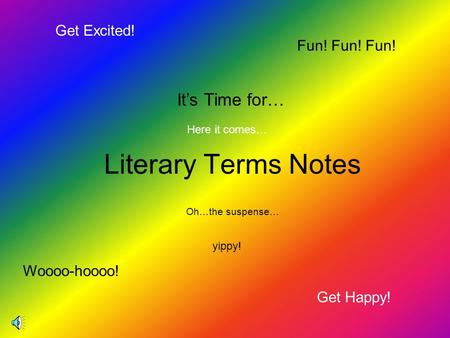