7 6) Richard: "I am going to ride a skateboard." Richard said to me that. 7) Stephen and Claire: "We have cleaned the windows." Stephen and Claire told me that. 8) Charles: "I didn't have time to do my homework." Charles remarked that. 9) Mrs Jones: "My mother will be 50 years old." Mrs Jones told me that. 10) Jean: "The boss must sign the letter." Jean said that.

9 1) When the direct question is a “yes-no” question and begins with auxiliary (be,do have) or a modal verb (can, may,…) then the reported question begins with if/whether EX: “Did Tom go to bed last night?” she asked me. She asked me if/whether Tom went/ had gone to bed late the previous night. “Are you tired?” he asked. He asked if/ whether I was tired. “Can you get me ice cream, Tom?” asked Tim. Tim asked Tom if/whether he could get him an ice cream.

11 Rewrite the sentences using “Reported Speech” 1) “Do you need any help?” Jeremy asked. Jeremy asked me if/whether I needed any help. 2) “Where did you go yesterday?” she asked. She asked me where I went/had gone the day before/ theprevious day. 3) “What do you do in your free time, David?” Tracy asked. Tracey asked David what he did in his free time. 4) “Will you marry me Kate?” Jack asked. Jack asked Kate if/ whether she would marry him.

13 VERB+ INFINITIVE agree, offer, promise, refuse, ask,hope “Yes, I’ll post the letters.” He agreed to post the letters. “Shall I drive you to work?” He offered to drive meto work. “Of course I’ll lend you somemoney.” She promised to lend me some money. “No, I won’t call her.” He refused to call her.

15 VERB+ THAT CLAUSE agree, complain, explain, hope, promise, point out, reply, say, suggest, warn “Yes, it’s a lovely hat” He agreed that it was a lovely hat. “You are always interrupting me” He complained that I was always interrupting him. “Of course I’ll help you finish it” He promised that he would help me finish it. “I don’t like Indian food.” Mum pointed out that she didn’t like Indian food. 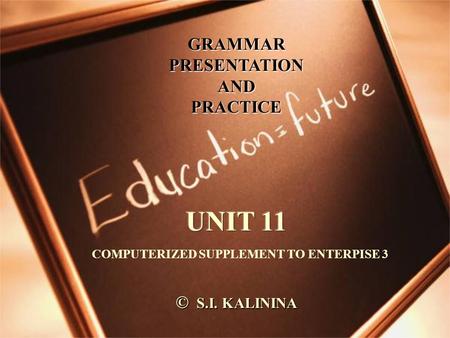 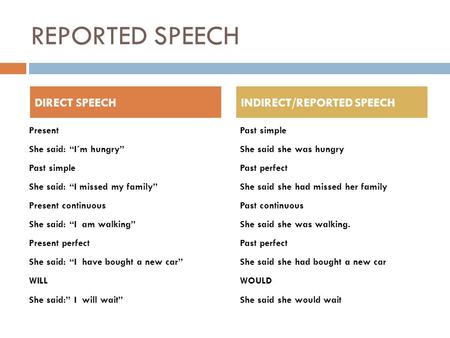 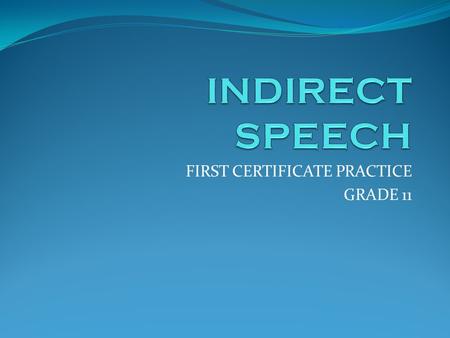 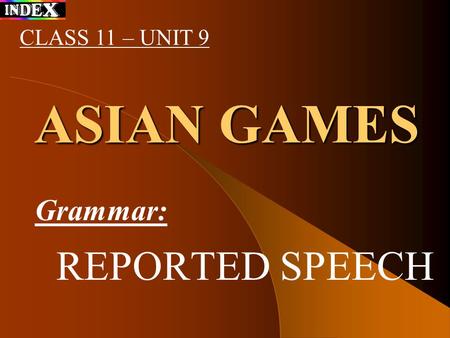