Average Lifetime Atoms stay in an excited level only for a short time (about 10-8 [sec]), and then they return to a lower energy level by spontaneous emission.

Presentation on theme: "Average Lifetime Atoms stay in an excited level only for a short time (about 10-8 [sec]), and then they return to a lower energy level by spontaneous emission."— Presentation transcript:

4 The Einstein Relation To introduce probabilities for these emission and absorption phenomena, let Ni be the number of atoms (or molecules) per unit volume that at time t occupy a given energy level, Ni For the case of spontaneous emission, the probability that the process occurs is defined by stating that the rate of decay of the upper state population (dN2/dt)sp must be proportional to the population N2. We can therefore write 1.2 the minus sign accounts for the fact that the time derivative is negative

7 we can define an absorption rate W21 using the equation:
1.6 where (dN1/dt)a is the rate of transitions l→2 due to absorption and N1 is the population of level 1. 1.7 where σ12 is some characteristic area (the absorption cross section), which depends only on the particular transition. It can be given in general farm: 1.7a Function g(ν — νo), symmetric about ν = ν 0, again of unit area, i.e., such that ʃg(ν — νo)dν = 1, and generally given by:

8 Einstein showed that for nondegenerate energy levels, has W21 = W12 and thus σ21 = σ12 If levels 1 and 2 are g1-fold and g2-fold degenerate (quantum physics describes a system in which different quantum states have equal energy), respectively, one then has , The corresponding expression for the absorption or simulated rate W= σF can then be written as: ρ =(nFhv/c) is the energy density of the em wave and μ is the electric dipole moment. also we can write

10 Einstein Thermodynamic Treatment
In Einstein treatment the concept of stimulated emission was first clearly established, and the correct relationship between spontaneous and stimulated transition rates was derived well before the formulation of quantum mechanics and quantum electrodynamics. Let us assume that the material is placed in a blackbody cavity whose walls are kept at a constant temperature T. Once thermodynamic equilibrium is reached, an em energy density with a spectral distribution ρv given by Plank Eq. 1.10 is established and the material is immersed in this radiation.

12 From Boltzmann statistics we also know that, for nondegenerate levels: 1.13
Using eq and in eq we get 1.14 When ν=νo we get the following relations: 1.15 , This equations show the relation between Einstein coefficients it can be measured laboratory for any element. Integration of this equation with the assumption that gt(v — v0) can be approximated by a Dirac δ function in comparison with ρv (see Fig. 2.3), we obtain

14 We can therefore write for the expression: 1.20
The normalized function [g(ν — νo)∆νo] is plotted in Fig. 2.6 versus the normalized frequency difference (ν — νo)/(∆vo/2). The full width of the curve between the two points having half the maximum value [full width at half-maximum (FWHM)] is simply ∆v0. The symbol gt(v - v0) for the total lineshape function, which can be expressed as: Using Fourier analysis to obtain line profile, where gt is a function give the probability of this excitation transition. Emission line is described by plotting spontaneous emission radiation intensity as a function of frequency (or wavelength), for the specific lasing transition.

15 A curve of the general form described by Eq.
is referred to as Lorentzian after H. E. Lorentz fig 2.6, who first derived it in his theory of the electron oscillator. is referred to as Gaussian fig 2.8

Download ppt "Average Lifetime Atoms stay in an excited level only for a short time (about 10-8 [sec]), and then they return to a lower energy level by spontaneous emission." 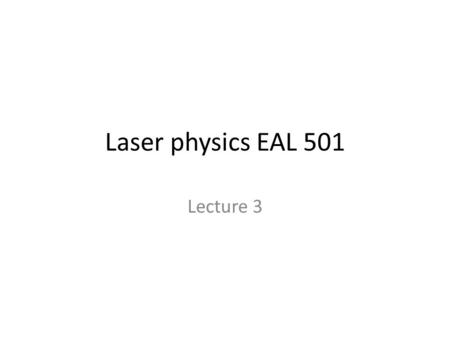 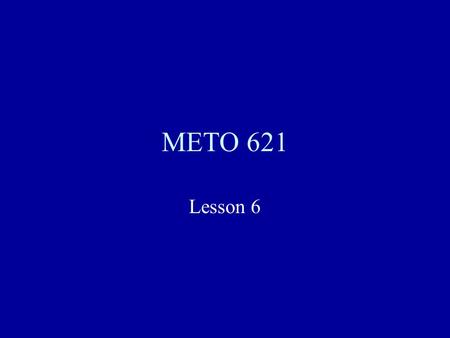 METO 621 Lesson 6. Absorption by gaseous species Particles in the atmosphere are absorbers of radiation. Absorption is inherently a quantum process. A. 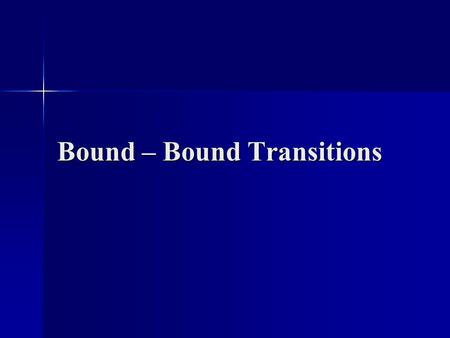 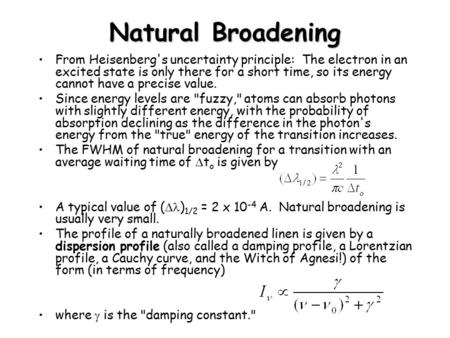 Natural Broadening From Heisenberg's uncertainty principle: The electron in an excited state is only there for a short time, so its energy cannot have. 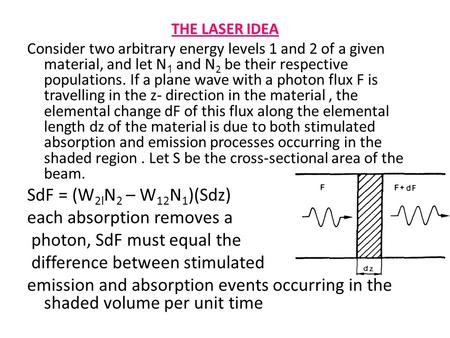 THE LASER IDEA Consider two arbitrary energy levels 1 and 2 of a given material, and let N 1 and N 2 be their respective populations. If a plane wave with. 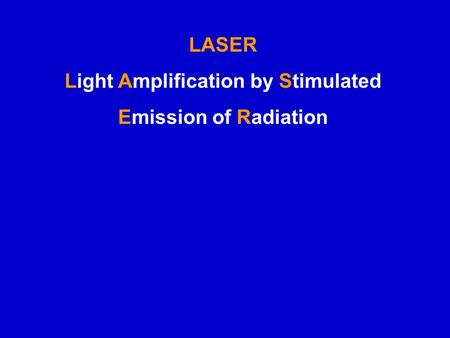 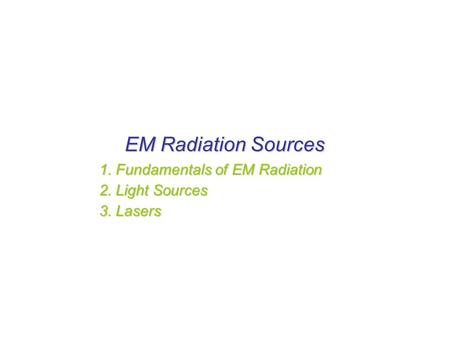 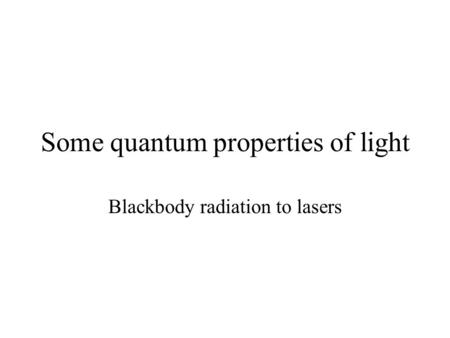 Some quantum properties of light Blackbody radiation to lasers. 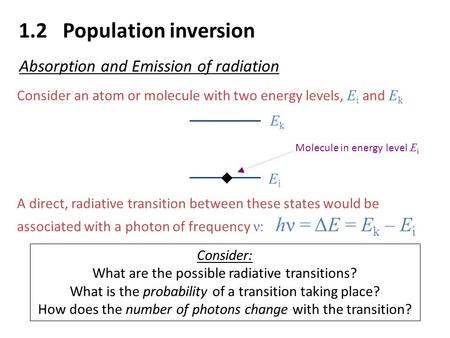 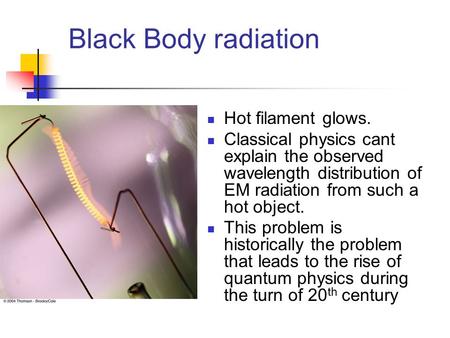 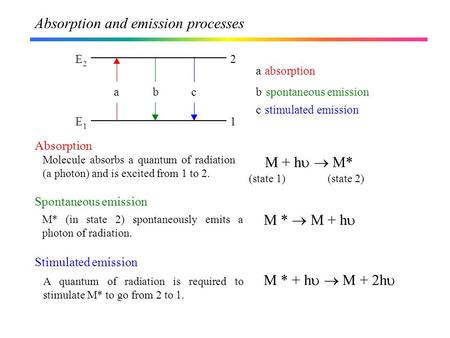 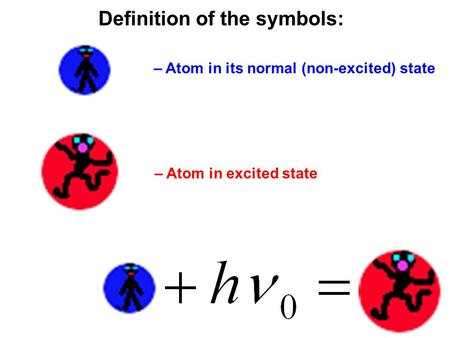 – Atom in its normal (non-excited) state – Atom in excited state Definition of the symbols: 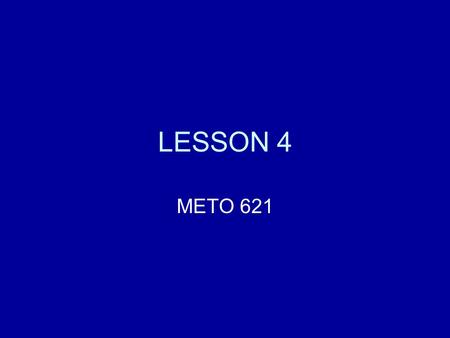 LESSON 4 METO 621. The extinction law Consider a small element of an absorbing medium, ds, within the total medium s. 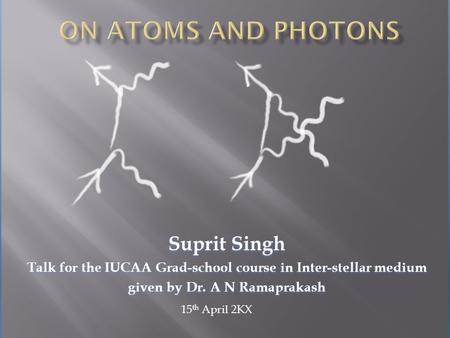 Suprit Singh Talk for the IUCAA Grad-school course in Inter-stellar medium given by Dr. A N Ramaprakash 15 th April 2KX. 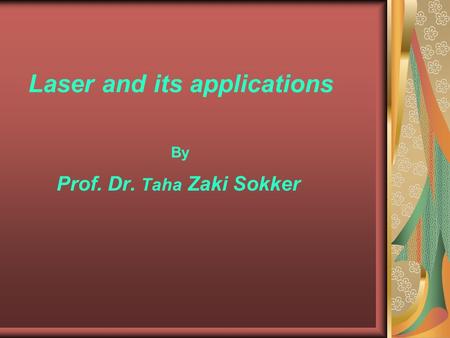 Laser and its applications 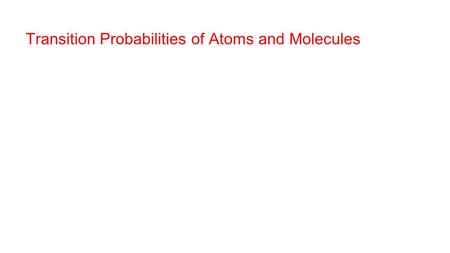 Transition Probabilities of Atoms and Molecules. Einstein’s analysis: Consider transitions between two molecular states with energies E 1 and E 2 (where. 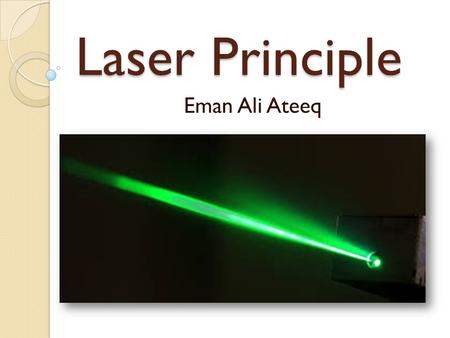 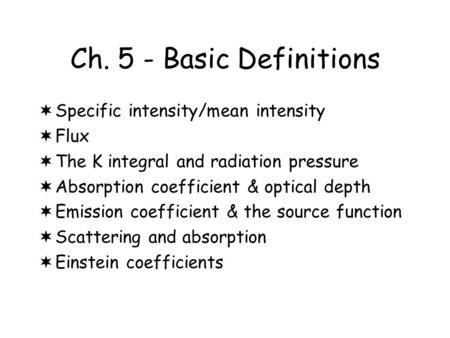 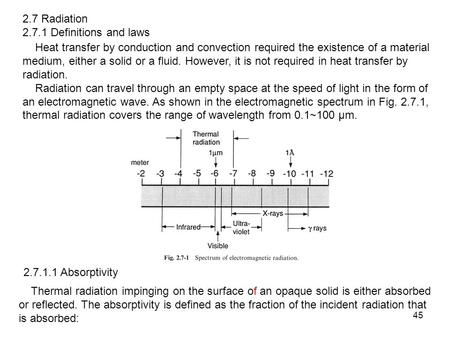 Radiation Definitions and laws Heat transfer by conduction and convection required the existence of a material medium, either a solid or a. 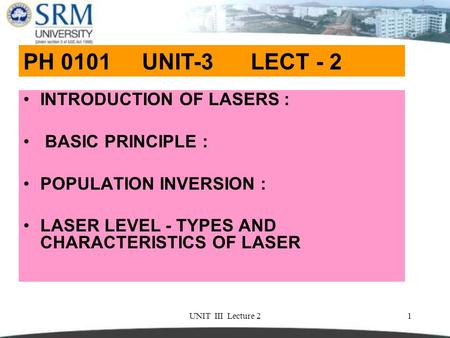