4 Faraday’s Experiment Faraday attempted to observe an induced electric field He didn’t use a lightbulb If the bar magnet was in motion, a current was observed If the magnet is stationary, the current and the electric field are both zero Section 21.1

7 Magnetic Flux Faraday developed a quantitative theory of induction now called Faraday’s Law The law shows how to calculate the induced electric field in different situations Faraday’s Law uses the concept of magnetic flux Magnetic flux is similar to the concept of electric flux Let A be an area of a surface with a magnetic field passing through it The flux is Φ B = B A cos θ Section 21.2

9 Magnetic Flux, final The magnetic flux can be defined for any surface A complicated surface can be broken into small regions and the definition of flux applied The total flux is the sum of the fluxes through all the individual pieces of the surface The unit of magnetic flux is the Weber (Wb) 1 Wb = 1 T. m 2 Section 21.2

10 Faraday’s Law Faraday’s Law indicates how to calculate the potential difference that produces the induced current Written in terms of the electromotive force induced in the wire loop The magnitude of the induced emf equals the rate of change of the magnetic flux The negative sign is Lenz’s Law Section 21.2

13 Faraday’s Law, Summary Only changes in the magnetic flux matter Rapid changes in the flux produce larger values of emf than do slow changes This dependency on frequency means the induced emf plays an important role in AC circuits The magnitude of the emf is proportional to the rate of change of the flux If the rate is constant, then the emf is constant In most cases, this isn’t possible and AC currents result The induced emf is present even if there is no current in the path enclosing an area of changing magnetic flux Section 21.2

14 Flux Though a Changing Area A magnetic field is constant and in a direction perpendicular to the plane of the rails and the bar Assume the bar moves at a constant speed The magnitude of the induced emf is ε = B L v The current leads to power dissipation in the circuit Section 21.2

16 Electrical Generator Need to make the rate of change of the flux large enough to give a useful emf Use rotational motion instead of linear motion A permanent magnet produces a constant magnetic field in the region between its poles Section 21.2

17 Generator, cont. A wire loop is located in the region of the field The loop has a fixed area, but is mounted on a rotating shaft The angle between the field and the plane of the loop changes as the loop rotates If the shaft rotates with a constant angular velocity, the flux varies sinusoidally with time This basic design could generate about 70 V so it is a practical design Section 21.2

22 Problem Solving Strategy Recognize the principle The induced emf always opposes changes in flux through the Lenz’s Law loop or path Sketch the problem Show the closed path that runs along the perimeter of a surface crossed by the magnetic field lines Identify Is the magnetic flux increasing or decreasing with time? Section 21.3 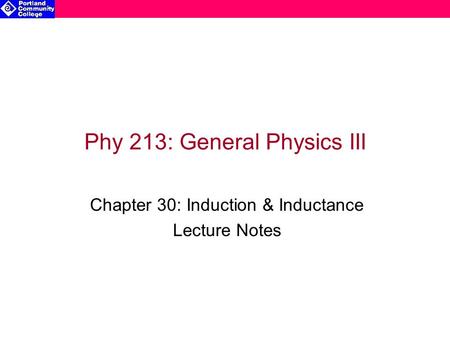 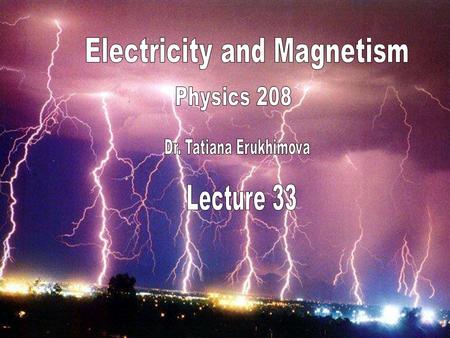 In the circuit below, suppose the switch has been in position A for a very long time. If it is then switched to B at t=0, find the current as a function.