2 CLIC Workshop 15.09.2009 A.AKSOY 2/22 Introduction The aim of the study is finding best linac optics in order to transport the beam through linac in required tolerances. Currently transverse instabilities have been studied only (which is one of the major task of instabilities in linacs). Multibunch effects have been focused mostly. New designing (which is not fully designed) accelerator structure dimensions have been used for building up lattice layouts. Since we don’t have fully designed structure CTF3 SICA structure have been used in some points PLACET and analytical calculations have been used for calculations

4 CLIC Workshop 15.09.2009 A.AKSOY 4/22 Motivation One of the major problems with accelerating intense bunches in linac is the instability driven by wakefields. This instability, generated by off-axis beam trajectories, can develop within a single-bunch or along a train of bunches and always leads to a dilution of the emittance. As it can be seen on table the intensity of drive beam is very high due to fully loaded operation which means strong wake field effect… CTF3CLIC DB Energy (MeV)1502400 Pulse current (A)3.54.2 Bunch charge (nC)2.338.4 Pulse Length (µs)1.4140 Bunch separation (cm)2060 No of bunches per pulse 210070128

7 CLIC Workshop 15.09.2009 A.AKSOY 7/22 Short range wakes Both ABCI code and Karl Bane’s formulas were used to calculate short range wakes; Since the structure does not have constant gap

9 CLIC Workshop 15.09.2009 A.AKSOY 9/22 Single Bunch analysis If only the particles inside a single bunch are taken into account equation of motion of each particle For constant offset the displacement of the trailing slices in bunch will be proportional of L: Linac length E: energy β: betatron functions inside structure Plots for spoiled beam due to short range wake effect with large betatron W ┴ : point like dipole wake per unit length ρ : charge distribution

10 CLIC Workshop 15.09.2009 A.AKSOY 10/22 Multi bunch analysis For multi bunch case point-like bunches with distance in a train are considered. Similarly the equation of motion of each bunch Here wake function is sum of modes of structure ω m : frequency of mode K m : kick factor of mode Q m : damping factor of mode The displacement of each bunch in train is given with matrix A where and D.Schulte, “Multi-bunch Calculations In The CLIC Main Linac”, PAC09

11 CLIC Workshop 15.09.2009 A.AKSOY 11/22 Lattices Minimum deflection of particles from their ideal path requires small betatron oscillation which means strong lattice Four different lattice types were taken into account Quadrupoles were considered to has length between 22 cm to 35 cm Maximum quad field is considered to be 1 T for 40 mm quad aperture at 2.4 GeV

13 CLIC Workshop 15.09.2009 A.AKSOY 13/22 Long range wake effects Calculations were done using PLACET and analytical equations for Plots shows normalized amplitudes of the bunches at the end of the linac for an offset of incoming train. Good agreement with analytical calculations and PLACET The amplitudes (for 2xQm and 1xKm of CTF3) seems agreeable for all lattices

15 CLIC Workshop 15.09.2009 A.AKSOY 15/22 Coherent jitter Coherent jitter of all bunches of the incoming beam causes scattering of the trailing bunches. Coherent jitter is given with Calculations was done analytically with scaling damping factor and kick factor of CTF3 structure For all lattices coherent jitter is acceptable in green and yellow areas. FODO-1 lattice allows larger Q and K

16 CLIC Workshop 15.09.2009 A.AKSOY 16/22 Bunch to bunch jitter Random bunch-to- bunch jitter of the incoming beam also leads to scattering of the final bunches and it is given with For all lattices the limit of acceptability is the area of green and yellow Again FODO-1 lattice allows larger Q and K

17 CLIC Workshop 15.09.2009 A.AKSOY 17/22 Emittance growth Misalignment for all Quads Err_x,y=0.2 mm Err_px,y=0.2 m.rad Misalignment for all BPMs Err_x,y=0.2 mm Err_px,y=0.0 RF structures and other pieces are perfectly aligned 1 to 1 corrections were performed Since quadrupole strengths are weaker in FODO2 alignment is easier than other lattices. Triplet lattice the emittance growth is huge due to strong quadrupoles and alignment difficulty

19 CLIC Workshop 15.09.2009 A.AKSOY 19/22 CLIC DB time structure CLIC DB pulse consist of 24x24 sub pulses which fills even-odd RF buckets At an exact time sub pulse switches and starts to fill odd (-even) bucket On that point the wake will change due to timing of bunches. This chance can cause not only amplitude change but also beam losses.. This condition was not taken into account this situation in all calculations above

20 CLIC Workshop 15.09.2009 A.AKSOY 20/22 Conclusion We have 4 different type lattices to make calculations for DB linac after the structure fully designed However the simulations give some ideas about damping requirement for the structure incase the kick factors of new structure are close values to CTF3 The beam was considered to be without any phase or energy error and we didn't make any calculation about longitudinal stability DB pulse time structure was not taken into account for all calculations as well … 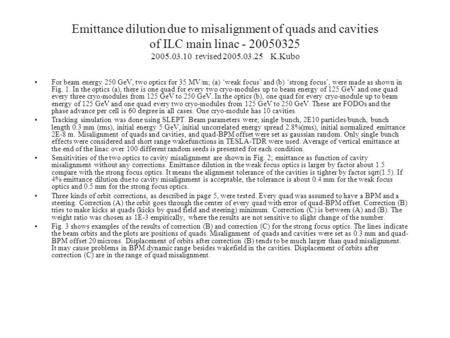 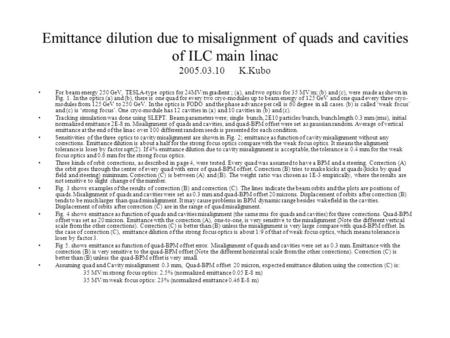 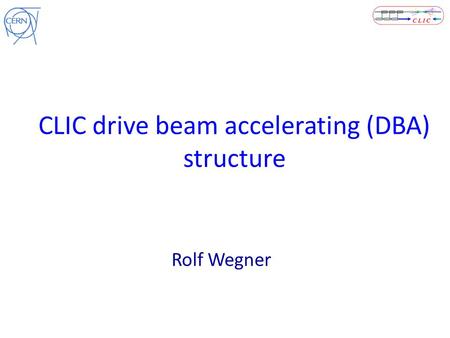 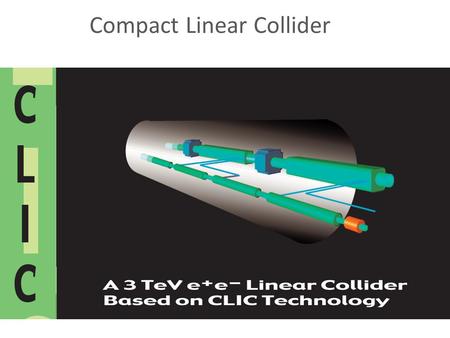 Compact Linear Collider. Overview The aim of the CLIC study is to investigate the feasibility of a high luminosity linear e-/e+ collider with a centre. 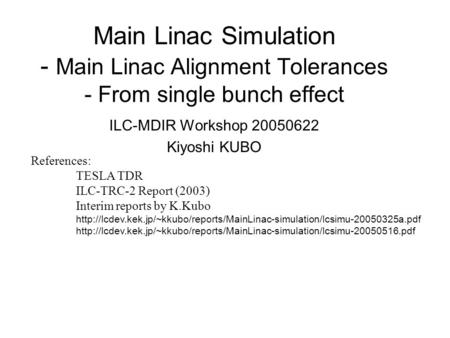 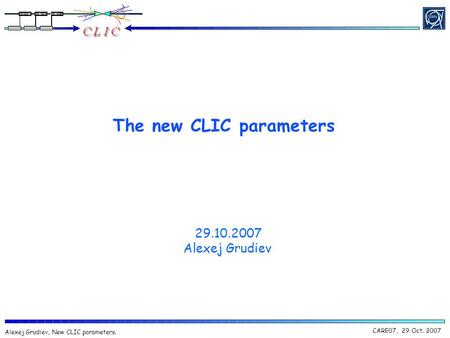 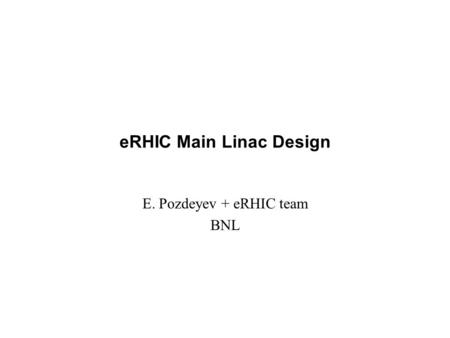 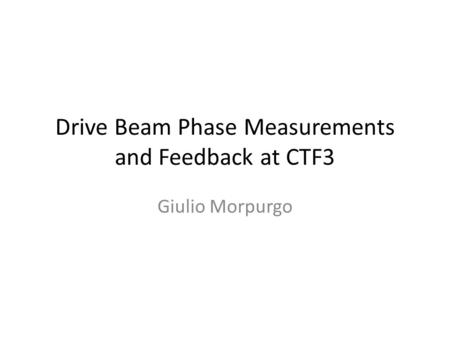 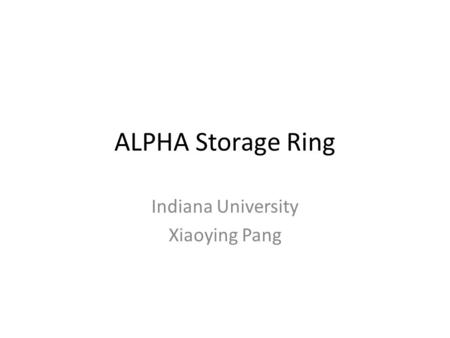 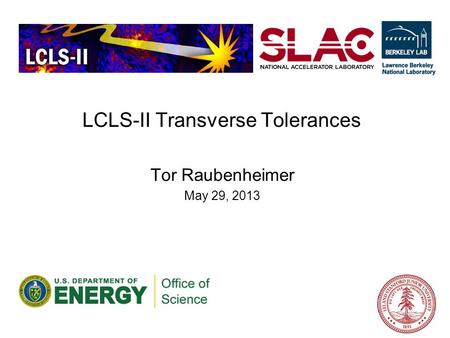 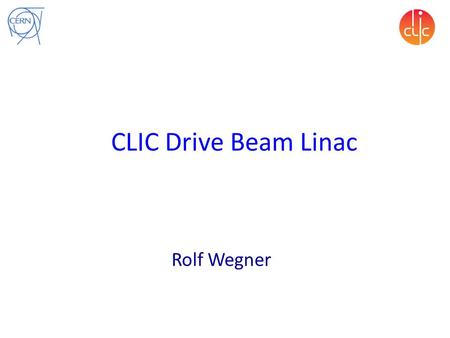 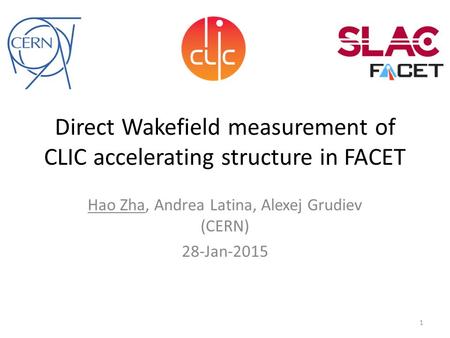 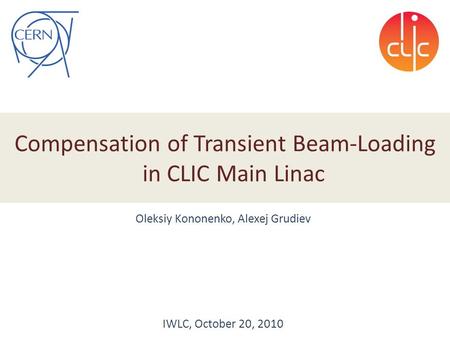 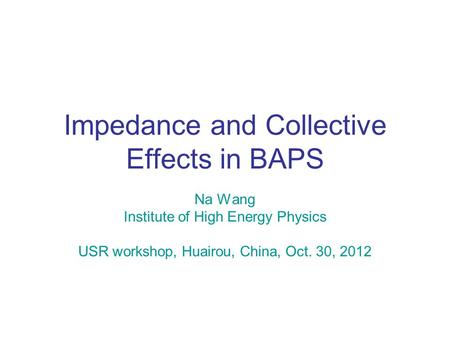 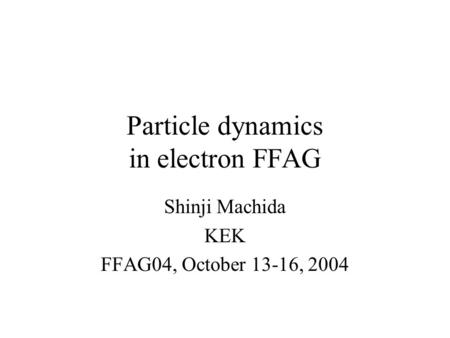 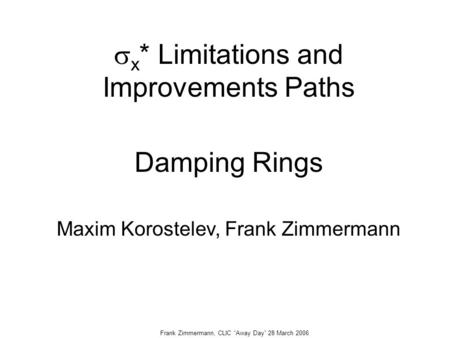 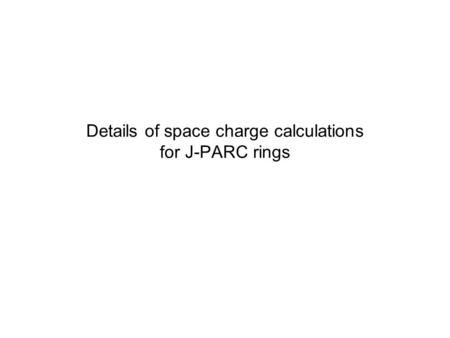