1 King Arthur and His Knights

2 The Legend Begins… Arthur is the son of King Uther Pendragon and Igrayne, wife of Gorlois, Duke of Cornwall. Merlin the Magician forced the King to “swear a solemn oath” to allow Merlin to bring up Arthur as he chose. Merlin delivered the newborn unchristened child to Sir Ector. Sir Ector christened the child and raised him as his own, not knowing he was the future king. Insert appropriate art.

3 “Whoso pulleth this sword out of this stone and anvil is rightly King of all England”
King Uther died two years after Arthur’s birth, leaving England in turmoil – a country without a king Several years passed, until all the lords of the realm gathered on Christmas Day looking for a miracle to show them who should rightly be King. The “Sword in the Stone” appeared in the church courtyard, bearing the famous inscription. Insert picture from above site.

4 Who would be King? It was decided that a tournament would be held to determine who would win the right to pull the sword out of the stone. Sir Ector and his son, Sir Kay, traveled to the tournament. Sir Kay forgot his sword and asked his younger brother, Arthur to retrieve it. Arthur decided to get the sword that was in the stone and give it to Sir Kay. Insert image from the above site.

5 Arthur becomes King Sir Ector and Sir Kay both knelt down to Arthur and told him of his true identity. The Lords were upset because they did not want a boy who was not of “high blood” to govern their country. The commoners finally cried out that Arthur was the rightful King and should be crowned. Arthur was first knighted, then crowned, by the Archbishop of Canterbury. Arthur swore to his Lords and Commoners to be a true King, and to govern with “true justice.” Insert appropriate graphic.

6 The Land Called Camelot
Arthur ruled in peace for many years… Guinivere, daughter of King Leodegrance, married Arthur Sir Lancelot, son of the Lady of the Lake, Arthur’s “First Knight” Merlin, wizard and advisor to the King Other Knights of the Round Table: Sir Gawain, Sir Galahad, Sir Percivale, Sir Bedivere Insert appropriate image of the round table. 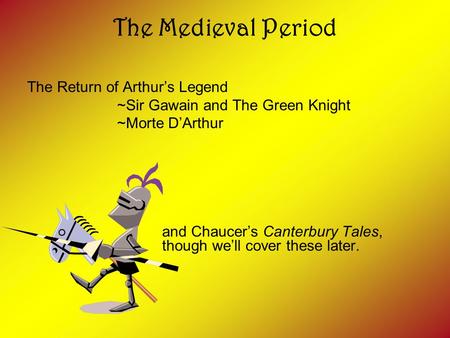 The Medieval Period The Return of Arthur’s Legend ~Sir Gawain and The Green Knight ~Morte D’Arthur and Chaucer’s Canterbury Tales, though we’ll cover these.