4 THE FEDERAL COURT SYSTEM
Jurisdiction is the authority of the courts to hear certain cases. Under the Constitution, federal courts have jurisdiction in cases involving federal law, treaties, and the interpretation of the Constitution ORIGINAL JURISDICTION Lower Courts have the authority to hear cases for the first time; both district courts and the SCOTUS; trials conducted, evidence presented, and juries determine the outcome of the case APPELLATE JURISDICTION Courts that hear reviews or appeals of decisions from the lower Courts; Appellate Courts and the SCOTUS have appellate jurisdiction CONCURRENT JURISDICTION Cases can be tried at both the state and federal level.

6 STRUCTURE OF THE JUDICIAL SYSTEM
District Courts – created under the Judiciary Act of to serve as trial courts at the federal level Every state has at least one district court (larger states may have several) – Washington, DC and Puerto Rico have one each 94 District Courts total hearing more than 80% of all federal cases Courts of Appeals – designed to help lessen the work of the Supreme Court Appellate Courts decide appeals from the district courts and review decisions of federal administrative agencies 13 Appellate Courts (divided into circuits) – circuit for Washington DC Panel of judges rather than jury

8 STRUCTURE OF THE JUDICIAL SYSTEM: SCOTUS
Supreme Court of the United States – only court actually created by the Constitution Final authority in dealing with all questions arising from the Constitution, federal laws, and treaties Both original AND appellate jurisdiction – original jurisdiction in cases involving representatives of a foreign government or cases where a state is a party Congress establishes the size of the SCOTUS (power to set number of judges) – 9 total judges

10 PART 2 PROCESS OF THE COURT

11 JUDICIAL SELECTION: OVERVIEW
The POTUS appoints federal judges with confirmation of the Senate. Under the Constitution, there are no formal qualifications for federal judges Serve “during good behavior” = for life Life terms allow judges to be free from political pressures when deciding cases May be removed through impeachment and conviction

12 JUDICIAL SELECTION: LOWER COURTS
Due to the number of appointments made to the lower courts, the DOJ and WH handle most of the nominations Senatorial Courtesy has traditionally been used (practice of allowing individual senators who represent the state where the district is located to approve or disapprove potential nominees) Because appellate courts cover several states, individual senators have less influence and senatorial courtesy does NOT play a role in the nomination process Senate tends to scrutinize appeals court judges more closely, since they are more likely to interpret the law and set precedent

13 JUDICIAL SELECTION: SCOTUS
Presidents may only appoint to the SCOTUS when a vacancy occurs during their term in office Presidents consider the following when making appointments: Party affiliation Judicial philosophy Judicial experience Litmus Test Acceptability (ABA, IGs, or endorsements from other justices)

14 JUDICIAL SELECTION: BACKGROUND OF JUDGES
Almost all federal judges have had some form of legal training, have held positions in government, or have served as lawyers for leading law firms, as federal district attorneys or as law professors Until recently, few African Americans, Hispanics, or women were appointed as judges to the lower courts Lyndon Johnson appointed the first African American (Thurgood Marshall) to the SCOTUS Ronald Reagan appointed the first women (Sandra Day O’Connor) to the SCOTUS

15 THE COURT AT WORK: ACCEPTING CASES
Thousands of cases are appealed to the SCOTUS every year with only a few hundred cases actually being heard; most cases denied because the justices either agree with the lower court decision or believe the case does not involve a significant federal question Rule of Four – four of the nine judges must agree to hear a case Most of the cases accepted may be disposed of in brief orders – returned to the lower court for reconsideration because of a related case that was recently decided Cases presented to the SCOTUS for possible review are done so by : writ of certiorari or certificate

16 THE COURT AT WORK: BRIEFS/ARGUMENTS
Once case reaches the SCOTUS, lawyers for each party to the case file a written brief (detailed statement of the facts of the case supporting a particular position by presenting arguments based on relevant facts and citations from previous cases) Amicus Curiae – filed by third parties that either support or reject the case Oral arguments allow both sides to present their positions to the justices during a 30 minute period. Justices may interrupt the lawyers, raising questions or challenging points of law

19 JUDICIAL PHILOSOPHY Judicial philosophy of activism and restraint is not the same as political philosophy (ideology) Judicial Activism (intervention) – holds that the Court should play an active role in determining national policies. The philosophy advocates applying the Constitution to social and political questions, especially where constitutional rights have been violated or unacceptable conditions exist Judicial Restraint – the Court should avoid taking the initiative on social and political questions, operating strictly within the limits of the Constitution and upholding the acts of Congress unless the acts clearly violate specific provisions of the Constitution. Restraint involves only a limited use of judicial powers and advocates the belief that the court should be more passive allowing the executive and legislative branches to handle policy-making

22 JUDICIAL VIEWPOINTS: JUDICIAL RESTRAINT
The idea of not overturning previous cases if possible Natural rights of citizens that government must leave alone Article III as a statement of SCOTUS powers to resolve disputes only Article III as NOT giving the SCOTUS the power to create policy Preserving the integrity of the 9th & 10th Amendments Idea that Congress should be in charge of new policy or create amendments The idea that the Founders built a government of limits and these should be followed

23 JUDICIAL VIEWPOINTS: JUDICIAL ACTIVISM
Overturning previous cases more easily if those are seen as wrong Judicial review as a proper and well-established power The Fourteenth Amendment giving the federal government power to “incorporate” The idea that the history of the state and local courts is a history of abuses of civil rights and segregation and the federal government should intervene The Constitution is silent on rights like “privacy” and “innocent until proven guilty” so the courts should protect these broadly Founders expected leaders to adapt the Constitution over time and wrote the document with this in mind Courts might try to correct laws or institutions over issues such as search and seizure rights, privacy rights, counsel rights Courts might try to change the ways the federal, state, or local governments try to set up rules, controls, laws, that affect the federal system 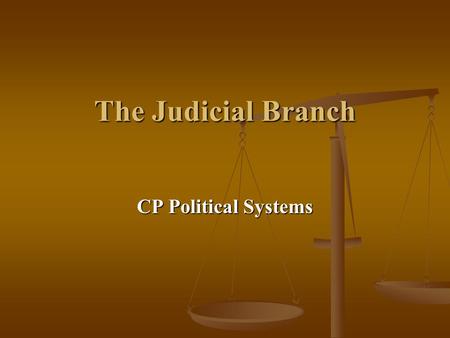 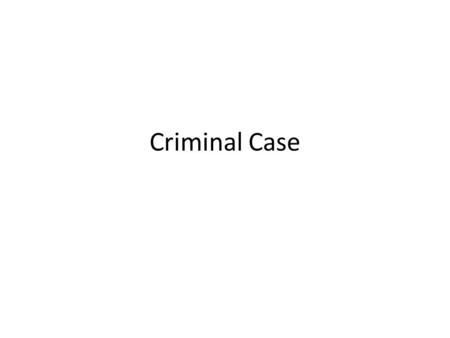 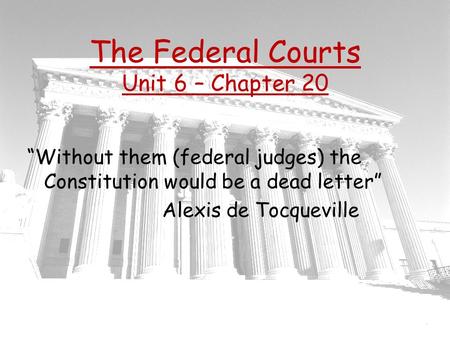 The Federal Courts Unit 6 – Chapter 20 “Without them (federal judges) the Constitution would be a dead letter” Alexis de Tocqueville.