Presentation on theme: "US History Chapter 3 Section 2. The Impact of Religion Henry VIII separated from the Catholic Church in 1534, but not everyone was happy with it. ▫Dissented."— Presentation transcript:

2 The Impact of Religion Henry VIII separated from the Catholic Church in 1534, but not everyone was happy with it. ▫Dissented – disagreeing with beliefs or practices Puritans – those who wanted to reform (or to purify) the Anglican (English) Church ▫Persecuted the English Catholics and Separatists Separatists – those who wanted to leave and set up their own churches (some fled to Netherlands) ▫Persecuted – treated harshly ▫Made a deal with the Virginia Company ▫Pilgrims – journeyers with a religious purpose ▫35 of 102 on Mayflower were Pilgrims

3 The Mayflower Compact Cape Cod – landing site, north of intended target ▫Plymouth – site where they settled William Bradford – leader and historian Mayflower Compact – document that pledged Plymouth’s loyalty to England and civility to each other and the good of the colony ▫They were outside of “Virginia Company land” ▫First written plan of self-government in colonies Native Americans – Squanto and Samoset ▫Showed the Pilgrims how to grow, where to hunt, and helped sign a treaty with other tribes ▫Massasoit – Wampanoag leader who signed a treaty with the Pilgrims

4 1,500 Number of English children in 1627 who were kidnapped and sent to work as servants in Virginia 80% Percentage of colonists who died in Jamestown, Virginia, during the winter of 1609–10 after getting so hungry they ate rats, snakes, and horsehide This feature can be found on pages 114–115 of your textbook. Click the mouse button or press the Space Bar to display the information. 65% Percentage of colonists who could read in 1620

5 2,500 Number of trees needed to build a ship the size of the Mayflower 0 Number of chairs set at the dinner table for children–only adults sat while eating 50 Number of pounds of tobacco colonists in Virginia were fined if they did not go to church in the early 1600s This feature can be found on pages 114–115 of your textbook. Click the mouse button or press the Space Bar to display the information.

6 The Other Colonies Massachusetts Bay – John Winthrop ▫Puritan colony due to English persecution of Puritans by Charles I (took crown in 1625) ▫Chance to create a community “based on the Bible” ▫Most of the 900 settled in Boston ▫Great Migration – movement of 15,000 Puritans to Massachusetts from persecution ▫General Court – made laws (at first stockholders and leaders, later an elected position in the colony) ▫Toleration – not being critical or persecuting people who hold other religious views ▫Puritans were NOT tolerant.

7 3 More Colonies… Connecticut – more fertile ground ▫Thomas Hooker – minister who led his congregation to Hartford because of dissatisfaction with Winthrop ▫Fundamental Orders of Connecticut – a plan of government  Between Hartford, Windsor, and Wethersfield  First written constitution of America Rhode Island – the outcasts ▫Roger Williams – minister who promoted religious freedom and respect for Native peoples  Banished in 1635 from Mass., Pick Up by the Narraganset people (sold Williams land = city of Providence)  Rhode Island and Providence Plantations – colony  First place in America where people of all faiths worshipped freely New Hampshire ▫John Wheelwright – led a group of dissidents from Mass. in 1638 ▫Independent of Mass. by 1679

8 Click the mouse button or press the Space Bar to display the answer.

9 Fighting the Natives Wars with Wampanoags and Narragansets over land ▫English took the land without paying or asking Pequot – war with Mass. and Conn. in 1636 (English win) ▫Conn. used the help of the Narraganset people Metacomet – nicknamed “King Philip”, Wampanoag chief ▫War for New England, England wins and expands

10 Section 2-15 Click the mouse button or press the Space Bar to display the answers. Checking for Understanding __ 1.the acceptance of different beliefs __ 2.to treat someone harshly because of that person’s beliefs or practices __ 3.Protestants who, during the 1600s, wanted to reform the Anglican Church __ 4.disagreement with or opposition to an opinion __ 5.Separatists who journeyed to the colonies during the 1600s for a religious purpose A.dissent B.persecute C.Pilgrims D.Puritans E.toleration Define Match the terms on the right with their definitions on the left. E B D A C

Download ppt "US History Chapter 3 Section 2. The Impact of Religion Henry VIII separated from the Catholic Church in 1534, but not everyone was happy with it. ▫Dissented." 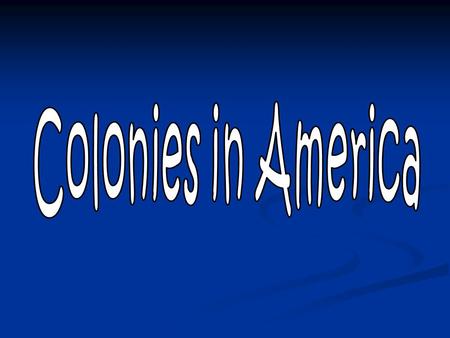 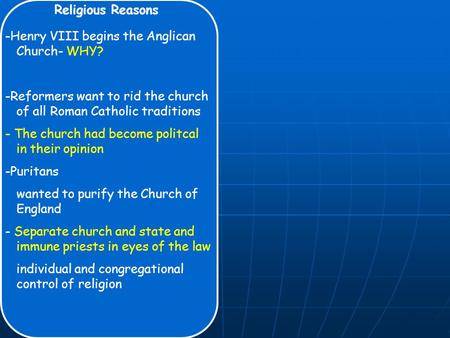 Religious Reasons -Henry VIII begins the Anglican Church- WHY? -Reformers want to rid the church of all Roman Catholic traditions - The church had become. 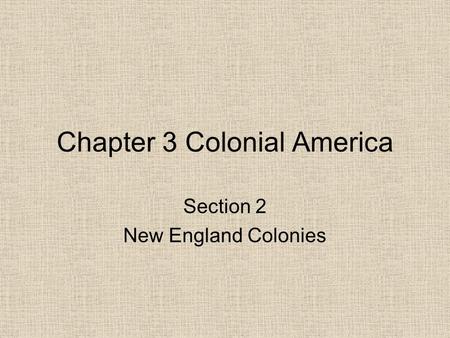 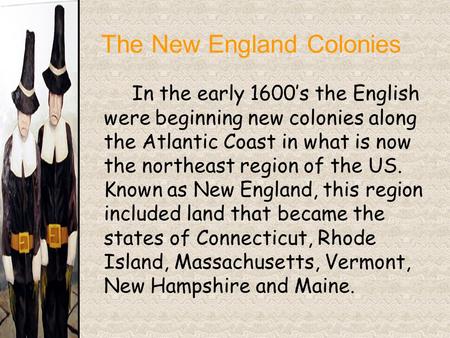 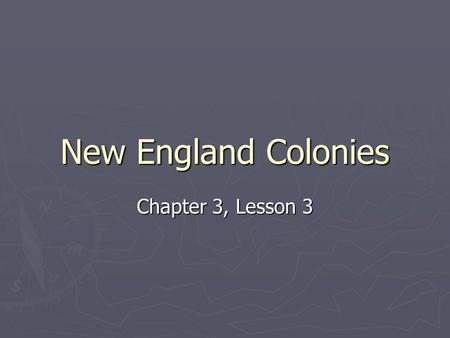 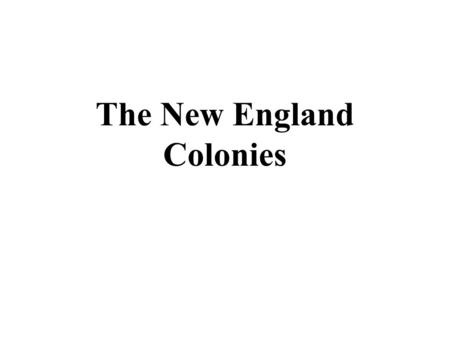 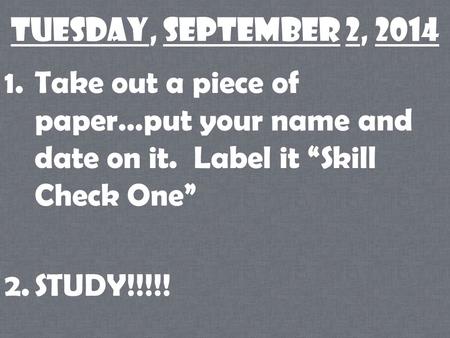 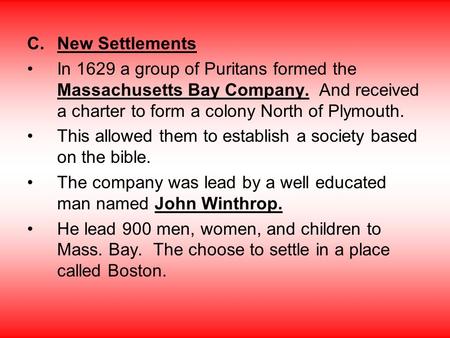