Presentation on theme: "“the jewel of the crown of cognition” - Steven Pinker"— Presentation transcript:

2 What is language? A form of communication that is based on a system of symbols It is perhaps what separates humans from other species.

4 Grammar: The rules of language
Semantics - deriving meaning from morphemes, words, and sentences Syntax - rules of how words are ordered Note that there is productivity in language as well as regularity

8 A related tangent: Theory of Mind
The understanding of symbolic representations occurs around 48 months of age This is also the age when theory of mind develops = understanding of others’ mental states

9 Zimmerman, Christakis, and Meltzoff (2007)
Compared language development in children who had been exposed to ‘Baby Einstein’ and ‘Brainy Baby’ DVDs Found a large negative correlation between watching and language abilities Avg of 6-8 words lost per hour of watching

10 Critical Period for Language
During this period, we are especially sensitive to environmental influences Evidence: Children in isolation do not learn rules of grammar Recovery after brain damage much more likely earlier rather than later

13 Biological Influences: Chomsky’s Language Universals
An innate ability to learn language is prewired Children worldwide develop in similar way around the world Language ability cannot be solely due to imitation

15 Strategies Be an active conversationalist.
Talk as if you’re understood. Use a style with which you feel comfortable. Remember, infants shape us, too!

Download ppt "“the jewel of the crown of cognition” - Steven Pinker" 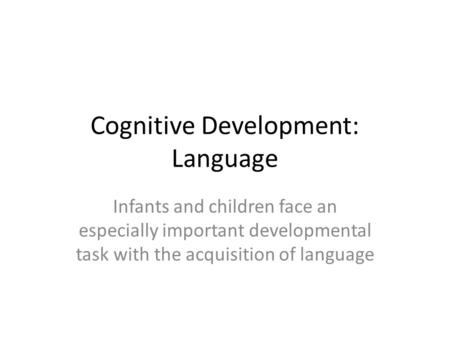