5 PCR is used in: forensic science e.g. genetic fingerprinting; medical research e.g. genetic screening to find alleles for genetic diseases; scientific research e.g. to investigate DNA of extinct species to determine their relationship with living organisms; The Human Genome Project. Its purpose is to amplify very small quantities of DNA producing, many identical copies of the selected section of DNA in a very short time.

6 method Heat to 95oC to break hydrogen bonds between complementary bases and separate strands Cool to 40-60oC & add excess primer Primers are short single stranded sequences of about 20 nucleotides which are complementary to bases in part of the DNA strand being copied. Cooling allows the primers to bind (anneal) to each DNA strand at specific complementary points Primers stop the DNA strands rejoining They bracket the DNA to be copied by attaching to the end of the DNA sequence and shows DNA polymerase where to start copying. There are 2 different primers as there are 2 different ends of the DNA DNA replication can only start with a double stranded region

7 Heat to 70oC. Add free DNA nucleotides & thermostable DNA polymerase
Polymerase copies each strand , starting with the primers. The polymerase is thermostable allowing the process to occur rapidly at the higher temperatures required, without denaturing. The enzyme was originally isolated from a bacterium that lives in hot springs. TWO DNA molecules will be formed following PCR and are used as templates as the process is repeated. This allows millions of copies of the original DNA to be produced in a very short time.

9 key requirement AVOID CONTAMINATION with any other DNA source
as both the original & contaminated DNA will be amplified Double Helix heated, unwinds 9

12 restriction endonuclease enzymes
Enzymes that recognise & cut specific nucleotide sequences. Originally from bacteria that use RE enzymes to cut DNA of attacking bacteriophages.

16 e.g. Hae 111 recognises the sequence GGCC, cutting between the G & C of each strand produces blunt ends because G & C lie opposite each other, these are not as useful as sticky ends. …G G C C… …C C G G…

18 If two samples of DNA are identical, treatment with a particular restriction enzyme will produce the same number of DNA fragments, each of similar size. However, different individuals have different DNA sequences and therefore produce different fragments when a particular restriction enzyme is used to cut an equivalent section of DNA. The fragments produced are called RFLPs, RESTRICTION FRAGMENT LENGTH POLYMORPHISMS.

27 Only approximately 2% DNA codes for proteins and 3% has a regulatory role. The remaining 95% has unknown function and is called non-coding DNA. Within this DNA there are many sections where a small number of bases are repeated many times e.g. ….ATCATCATCATCATCATCATC…

28 These sequences are called microsatellite repeat sequences or short tandem repeats.
The number of repeats of these MRSs are unique to an individual.

30 The DNA is treated to separate the DNA strands (heat)
Add probe – it base pairs with complementary DNA sequence. Detect the target sequence: Fluorescent probe use a laser scanner Radioactive probe use X-ray film

31 They are used to identify specific gene sequences .
Many inherited diseases are caused by a single allele with a known base sequences A probe complementary to the allele nucleotide sequence is used: If it binds the disease is present If it doesn’t bind it is not present.

35 Measuring genetic variation allows the following questions to be answered:
Does a particular gene differ from person to person? Are two persons closely related? Are certain alleles associated with an hereditary disease? How do genes vary within a population? How much genetic diversity is there within a particular species? How do genes differ from species to species? How can this be used to unravel the taxonomic relationship among species?

37 Genetic (dna) fingerprinting
Extract DNA from a sample e.g. from a crime scene, often PCR required to amplify the DNA 2. Restriction Enzymes cut the DNA into different sized fragments Specific MRSs used as they can be measured more accurately than RFLPs. Primers used to flank the MRS region involved to ensure fragments only come from that region

38 3. DNA fragments separated using gel electrophoresis.
DNA is placed into separate wells in agar gel. An electric current is applied across the length of the gel, with the negative electrode closest to the wells of DNA. DNA has a negative charge, so moves through the spaces in the gel towards the positive electrode. Smaller DNA fragments move further than larger fragments. 4. DNA is heated to separate the DNA strands to make it single stranded.

39 The gel will dry up, so the DNA fragments are transferred to a nylon membrane (process called Southern blotting) Radioactive or fluorescent DNA probes are added to the membrane and will join to the complementary base sequences in the microsatellite region selected. The sample is washed to remove any probes that do not base pair. The labelled DNA is added to X-ray film or a laser scanner is used to detect the radioactive or fluorescent probes and a pattern of bars appear, revealing the position of the DNA fragments: a DNA fingerprint. Diagram p82 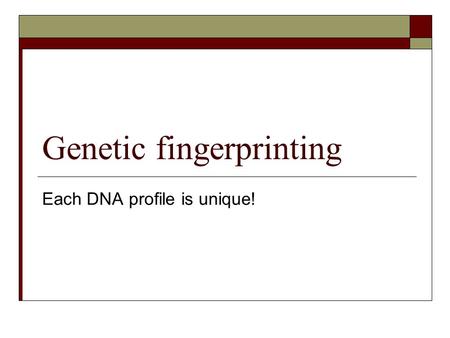 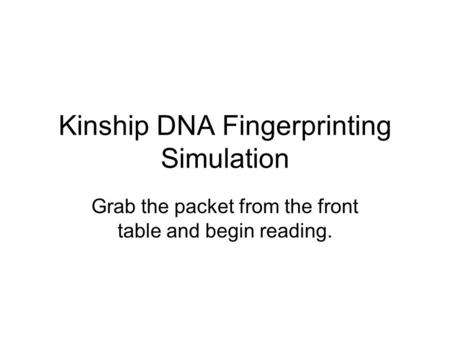 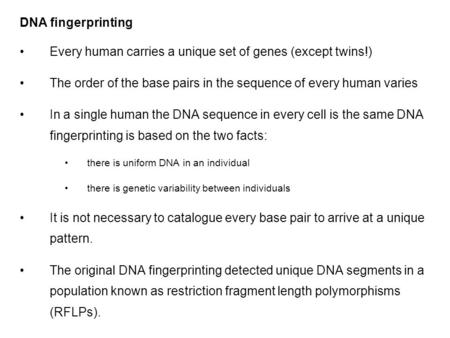 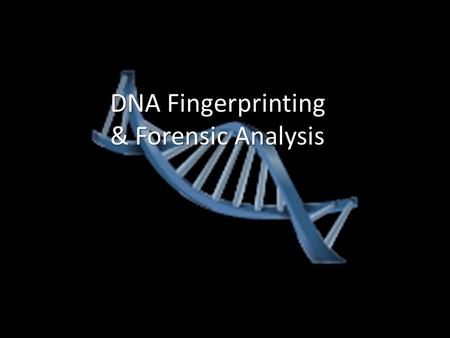 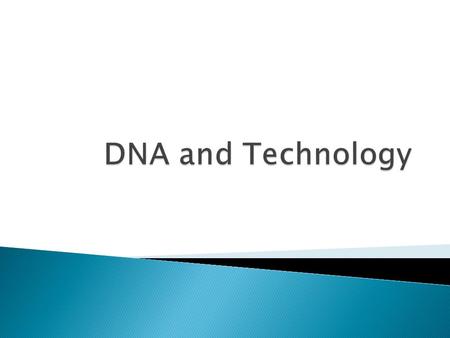  3 billion base pairs of DNA and about 30,000 genes  97% of human DNA is junk, as it does not code for protein products  Of this junk, some are regulatory. 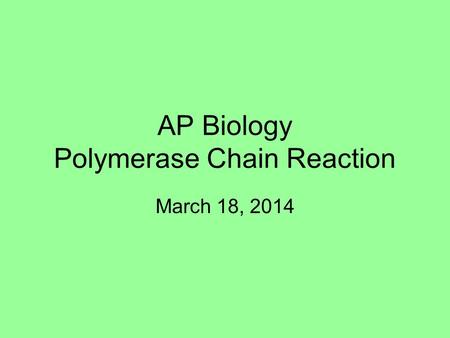