2 History In response to Behaviorism, a cognitive model of mind as computer was adopted (1960’s, 70’s) Humans process, store, encode, retrieve… bytes of information and the emphasis is on understanding the underlying metal procedures.

3 Basic Memory Terminology Encoding: how you transform a sensory input into some kind of representation that can be placed in memory Storage: how you retain encoded information in memory Retrieval: how you access information stored in memory

6 Short Term Memory Short Term Memory: The limited-capacity memory component for temporary information storage. How much you can store. Memory Span: (span of apprehension): # of items that can be recalled immediately after a presentation (in order). Capacity: Magic # 7 + 2 ‘bytes’ or Chunks: The limit of information that can be encoded, held, and reported from immediate memory (memory span). Duration: approximately 1 - 2 minutes

7 Short Term Memory Terminology Chunk: A group of information, unit of memory. The Bottleneck of STM: How can we function at such a high level cognitively with such a small STM capacity? Recoding: Process of grouping objects together (forming larger chunks). –e.g., recall the following:

14 Two types of rehearsal Maintenance Rehearsal: Focus on the to-be- remembered items, but no focus on what the items “mean” or how they are related to what you already know. Elaborative Rehearsal: Focus on what the to-be- remembered items “mean” and how they are related to things that you already know. –What’s active then? The to-be-remembered items AND information already in LTM (This will help form a connection, and will aid storage and retrieval) –Example: Learning someone’s phone # (312) 935-1482

15 Baddeley’s Working-Memory Model STM is simply thought of as storage of information. We need a more flexible system to explain the flexibility of the system. He proposed Working Memory (WM).

16 Why do we need an attention component to STM? STM capacity is measured using simple span tasks- items (letters, words, digits) are presented one per second and after a certain number of items have been presented, the subject must recall the items Problem: Measures of STM capacity do not predict performance on a task. This is because working memory capacity, not STM capacity is more critical. Conclusion: This suggests that the attention component is critical, bringing us back to the notion of resources.

17 Working Memory the Mental Workbench Three Important Components: The central executive and two subsidiary systems (slave systems), the articulatory loop and visuo-spatial sketchpad. These are independent from each other.

19 Working Memory Components Central Executive: overall controller of the system. Responsible for decision making, retrieval from LTM, and rehearsal for transfer of info into LTM. Also where reasoning and language comprehension take place. Articulatory Loop: Holds and recycle small amounts of sound information. You can think of this as older STM rehearsal buffer we discussed earlier. Visuo-spatial Sketchpad: Holds spatial and visual information for a short time. This component would be engaged in a spatial rotation task.

20 Working Memory cont. Resources: Work is done by allocating resources to a task. All the components have resources but the CE can also send more resources to the slave systems if a task is difficult. Resources only flow down in the system. 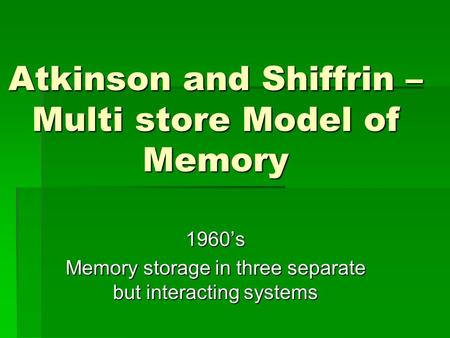 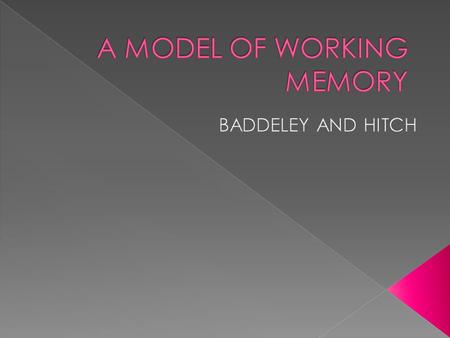 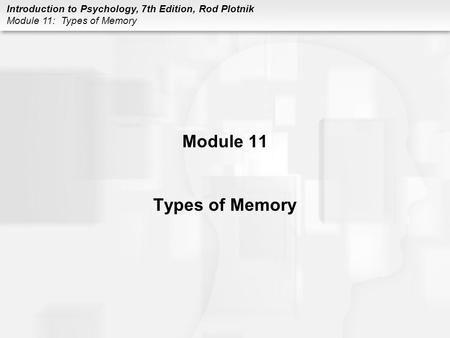 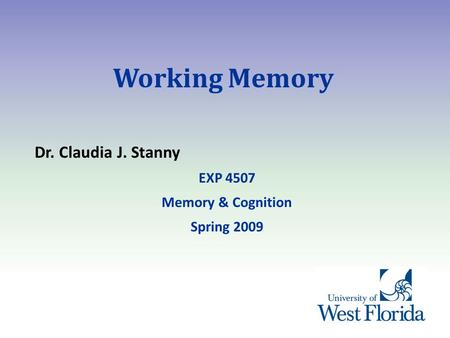 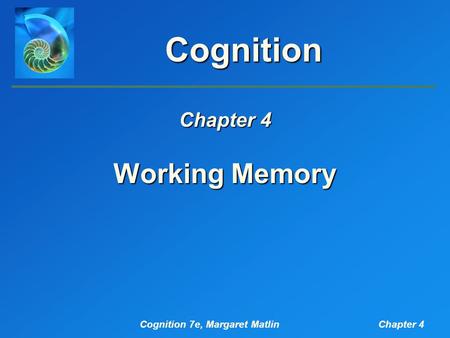 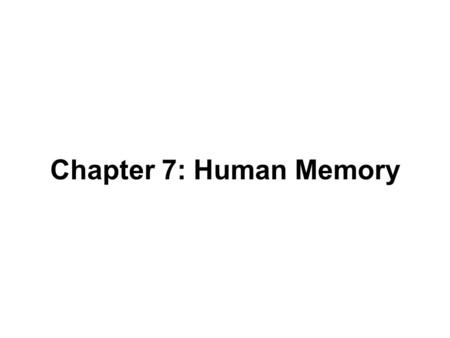 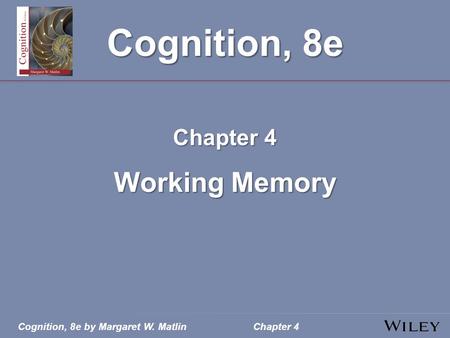 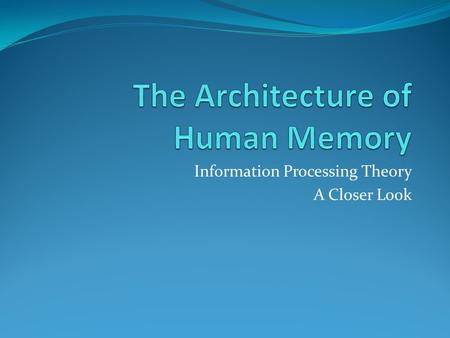 The Architecture of Human Memory 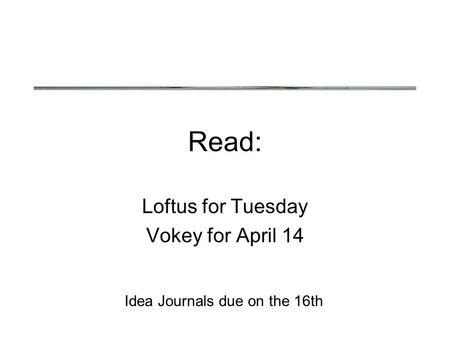 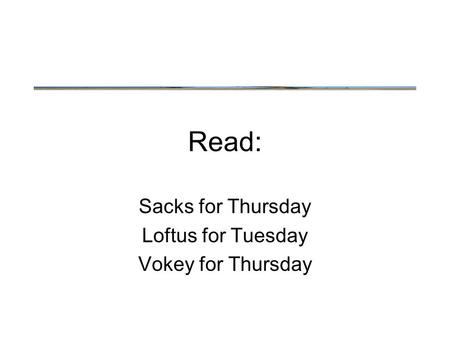 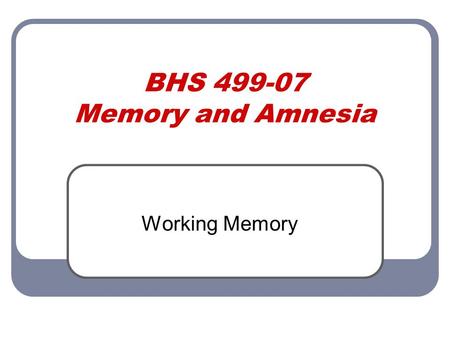 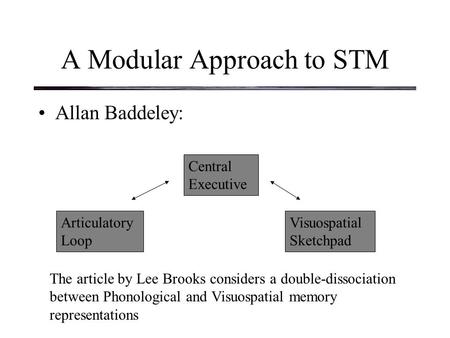 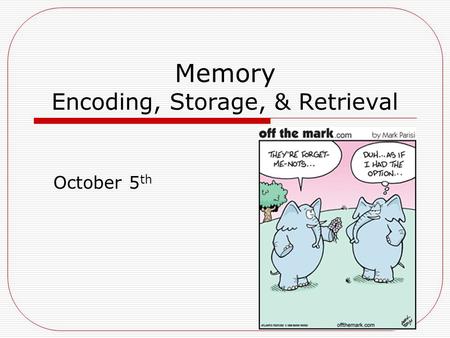 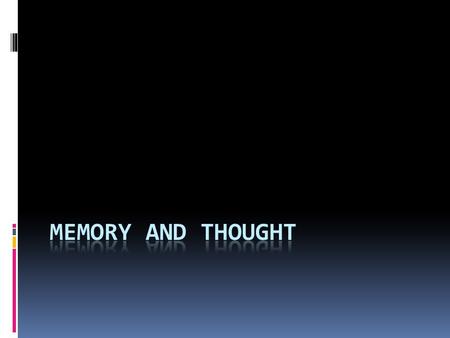 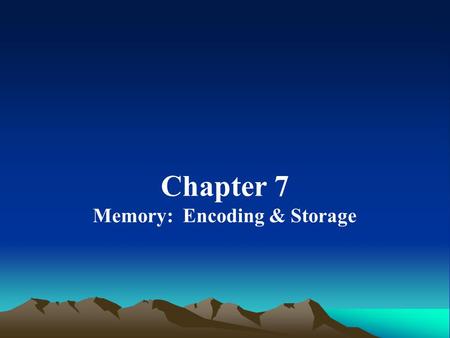 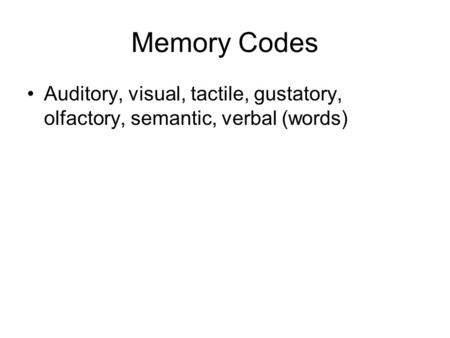 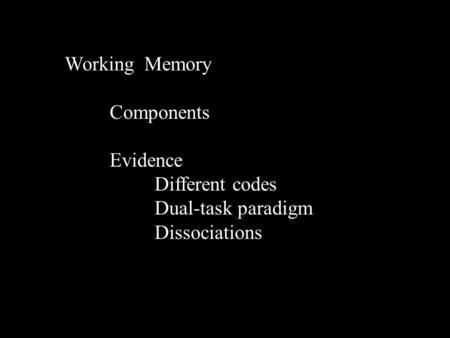 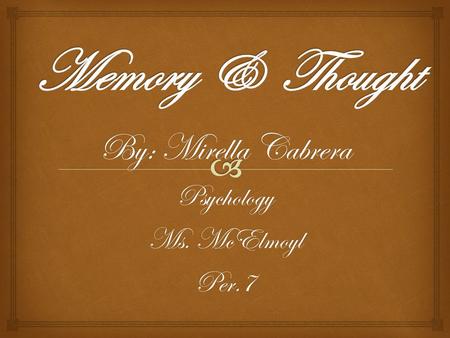 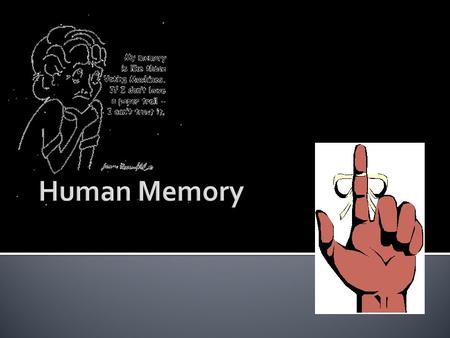  Did you need to check a real penny to be sure? Nickerson and Adams (1979) conducted an experiment and concluded that most people are not able to pick. 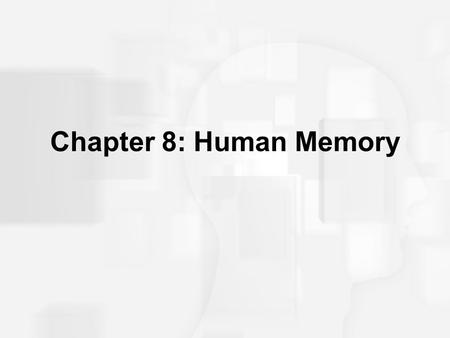