7 Teachings of Aristotle – 300 BCE
World is made up of 5 elements: Earth, air, water, fire and Quintessence Earth does not rotate.

8 Teachings of Aristotle
Clear, round, domes hold planets and stars. Laws of Motion: Things move by weight or violent force

9 Ptolemy 150 CE (Greek) Agrees with Aristotle
Used math and Geometry to “prove” the Geocentric Theory Problems: Planets must travel in loop orbits Does not fit calendar Math is forced

10 NEW HELIOCENTRIC THEORY
The theory is introduced by Copernicus (1473 – 1543) a Polish astronomer and mathematician Goal: Fix the problems of Ptolemy (Calendar and math) Make the sun the center and the math works!

11 HELIOCENTRIC THEORY Sun is the center of the universe.
The earth revolves around the sun and it rotates Problem: It goes against the teachings Aristotle and “common sense” On the Revolutions of the Celestial Spheres, the book written by Copernicus is not published until after his death

12 Laws: Johannes Kepler (1571 – 1630) German
The Proof: Used Brahe’s measurements –made one adjustment, and the math worked perfectly! Laws: Planets travel in an Ellipse Planets travel slow then fast Figure distance from sun by how long it takes to revolve around sun. T² = ka³

13 Explain the difference between the Geocentric and the Heliocentric theory’s.

14 Arabic Numerals During the Middle Ages, Europeans switched from Roman to Arabic numerals. This is very important for the Scientific Revolution. (Leonardo de Pisa) Without this system, Copernicus could not have made his mathematical calculations, Arabic numerals use a place number system consisting of ten numerals – when these are used up, a new number is added. Allows for fast calculations. Try to multiply: MDMCXLVII BY CCCLXXII without converting to Arabic Numerals

19 GALILEO GALILEI (1564-1642) Italian scientist
Improved the telescope Made observations that proved the Copernican theory of the universe Described motion of bodies on earth Church forced Galileo to recant; placed under house arrest.

20 Galileo vs. the Catholic Church
The church condemned heliocentric conceptions of the universe The Roman Inquisition Galileo’s trial Galileo recants, put under house arrest 19th-century depiction of Galileo before the Inquisition tribunal

21 Why did the church put Galileo Galilei on trial?

24 Medicine Before the Scientific Revolution
Based on tradition The Church Before the Scientific Revolution, many practitioners of medicine relied on theories that were centuries old and rarely based on anatomical research or observation. Medical treatments were at best ineffective and at worst lethal. The Church banned dissection, a practice critical in understanding the human body and how illnesses affect it. In general, the Church viewed sickness not so much as a physical disorder but as a spiritual punishment for sin. Human intervention was seen as challenging the will of God.

26 New Invention: The Telescope
Invented in the Netherlands Galileo - Made improvements to it in the early 1600s, it had not really been widely used as a practical tool for scientific observation Newton - Made further refinements in the early 1700s when he invented the reflector telescope, which uses a curved mirror to magnify objects to a much greater degree than a simple glass lens is capable.

28 The Microscope Hans Janssen began to construct compound microscopes, which used several lenses and produced much greater magnification of objects. 1600’s - Anton Van Leeuwenhoek developed new methods for grinding and polishing tiny lenses of great curvature which gave magnifications up to 270 diameters, the finest known at that time. He used these lenses to build vastly improved microscopes and make several groundbreaking observations: he was the first to see bacteria, blood corpuscles, and the “life” found in a drop of water. 1660’s, - Robert Hooke of the Royal Society of London improved on Leeuwenhoek’s microscope and performed a series of weekly demonstrations to show the power of the instrument. In 1665, he wrote Micrographia, a finely illustrated compendium of microscopic observations that also used the word “cell” as a biological term for the first time; the book sparked increased public interest in microscopy.

33 Chemistry: Robert Boyle worked on the properties of gases; Boyle’s Law: the volume of a gas varies with the pressure exerted on it Antoine Lavoisier: invented system of naming chemical elements – regarded as founder of modern chemistry.

34 What inventions were created or improved during the scientific revolution?

35 Women and the Origins of Modern Science:
Margaret Cavendish: wrote Observations Upon Experimental Philosophy; in the book she was critical of the growing belief that humans, through science, were masters of nature Maria Winkelmann: discovered a comet; was refused a teaching position because of her sex

36 RENÉ DESCARTES ( ) Geometry: any algebraic formula could be plotted as curve in space Deductive Reasoning: predicting particular results from general principles Cogito ergo sum (“I think, therefore I am”)

39 What are the characteristics of the scientific method?

40 Significance of the Scientific Revolution
Contributions of these scientists made the universe comprehensible for the first time The individual became much more important; collective authority was not the source of wisdom…individual intellect was Began long adversarial relationship between science and religion The Revolution laid the foundation for the Enlightenment of the 18th century… 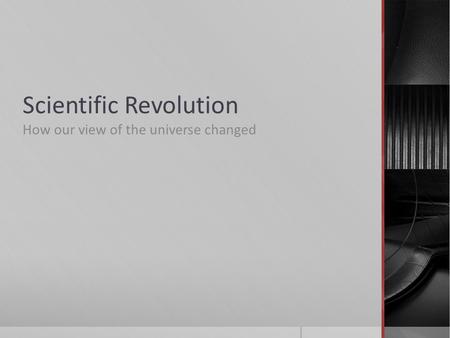 Scientific Revolution How our view of the universe changed. 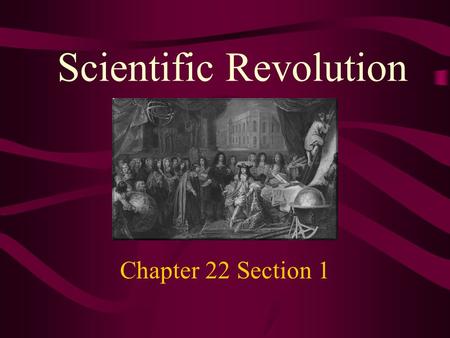 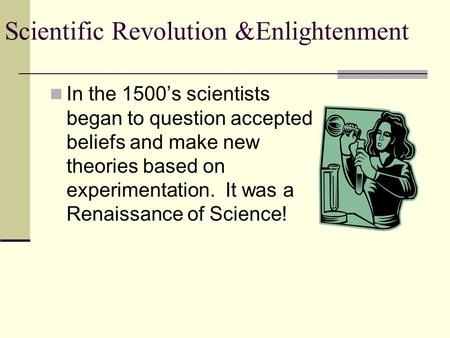 In the 1500’s scientists began to question accepted beliefs and make new theories based on experimentation. It was a Renaissance of Science! 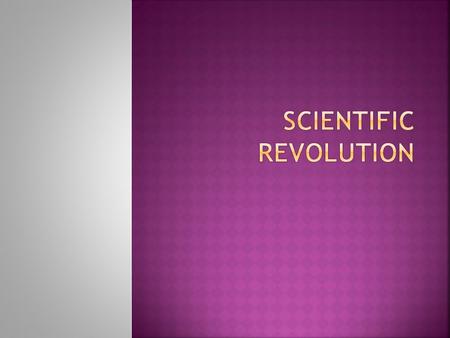 Before 1500 scholars referred only to ancient Greek and Roman scholars or the Bible During the Renaissance and Reformation scholars began questioning. 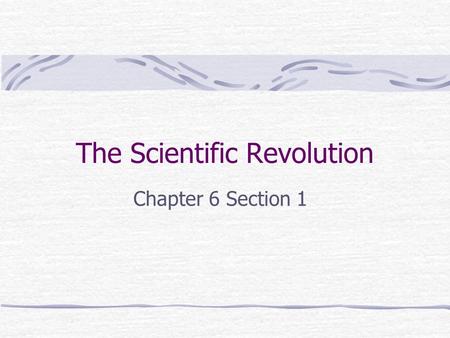 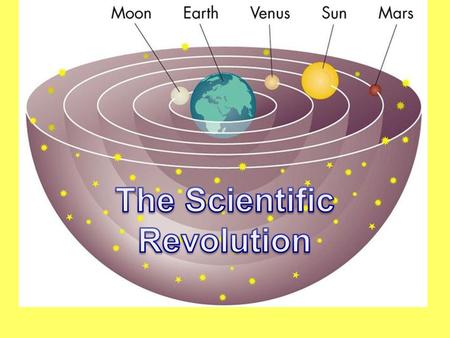 Few scholars openly challenged the accepted theories of the past GEOCENTRIC THEORY –Earth - center of the universe, everything else moved around the Earth. 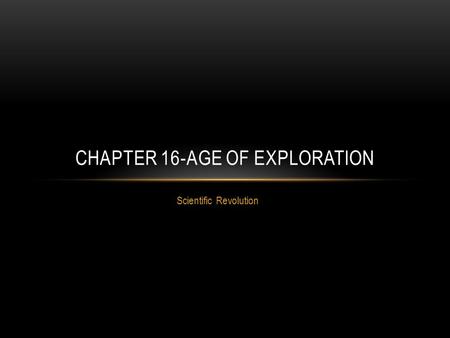 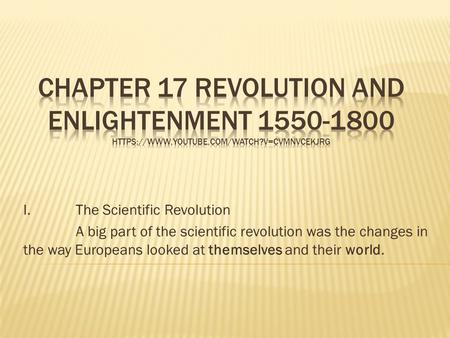 I. The Scientific Revolution A big part of the scientific revolution was the changes in the way Europeans looked at themselves and their world. 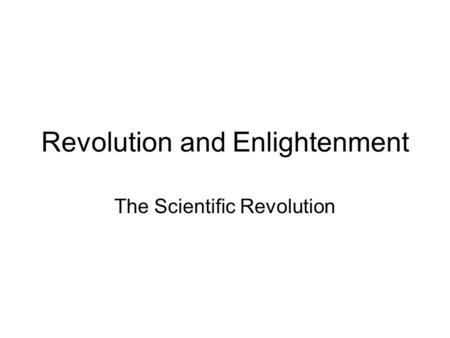 Revolution and Enlightenment The Scientific Revolution. 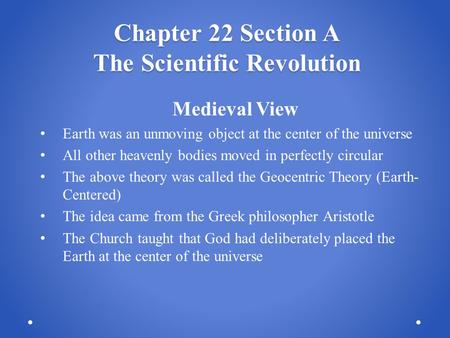 Chapter 22 Section A The Scientific Revolution Medieval View Earth was an unmoving object at the center of the universe All other heavenly bodies moved. 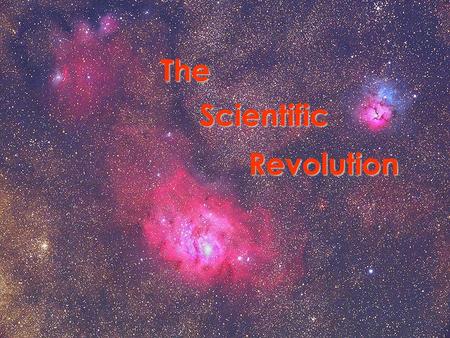 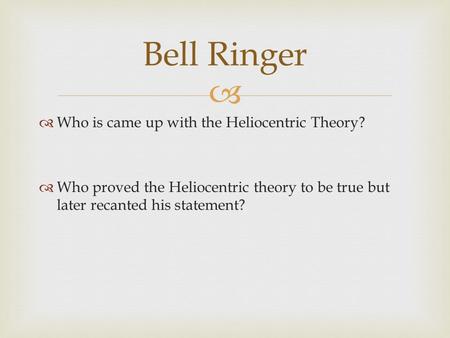 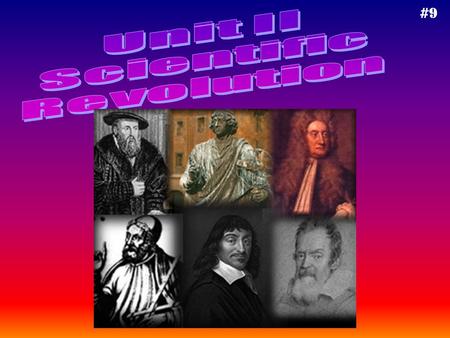 #9. #10 The Scientific Revolution began with the European re-discovery of Aristotle in the 12 th and 13 th centuries. The earliest followers were burned. 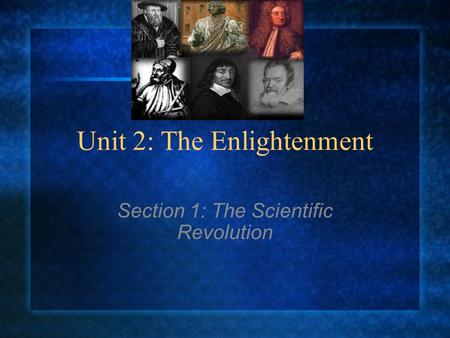 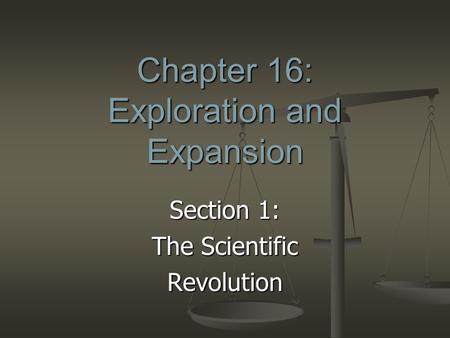 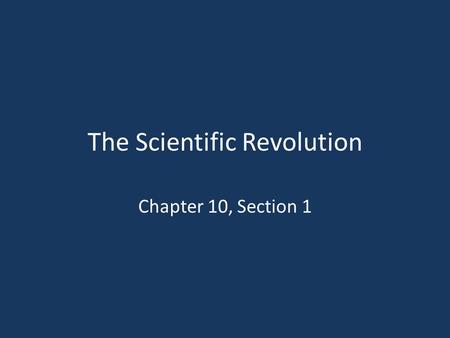 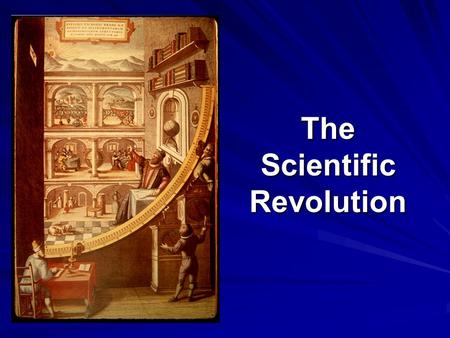 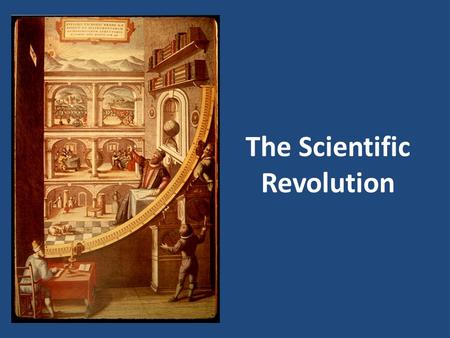 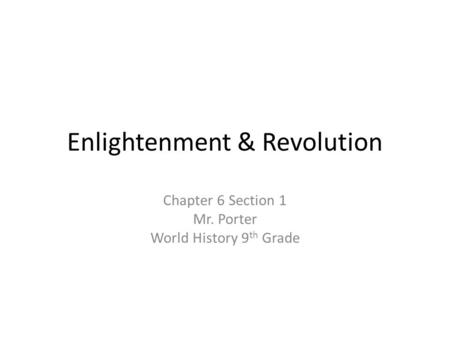 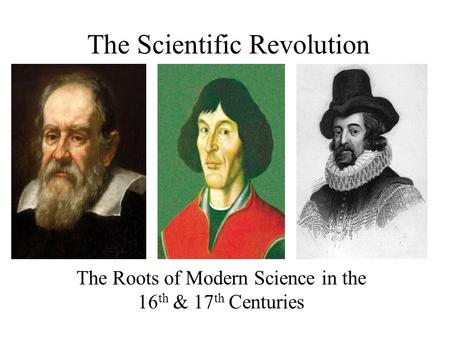 The Scientific Revolution The Roots of Modern Science in the 16 th & 17 th Centuries.