Presentation on theme: "Aim: What are the steps to the Scientific Method?"— Presentation transcript:

2 Aim: What are the steps to the Scientific Method?

4 State the Problem/Questions The problem identifies what you want to find out. Develop a clear statement defining the problem Make sure your problem is narrowed/specific enough State the problem in the form of a question: How does __________ affect _______? What is the effect of _______ on ________?

6 What is a hypothesis? An explanation that is based on prior scientific research or observations and that can be tested. “If… then… because” Statement

7 How do you test a hypothesis? Develop a test to support or not support your hypothesis. (This is your experiment). ◦Must be run multiple times ◦Must have only 1 independent variable (the factor being tested) ◦Must include 2 setups ◦Experimental setup ◦Control setup

8 How do you test a hypothesis? Use a Controlled Experiment ◦An experiment that tests only one factor at a time by using a comparison of a control group and an experimental group. Control Group ◦The group that the scientist changes nothing in. The Control group is used for comparison. Experimental Group ◦ The group that the scientist has changed something. It is the variable in the experiment where you want to see how this condition affects something.

10 What are constants? They are what the scientist kept the same in both the control group and the experimental group.

12 How can you analyze results to determine patterns? Record Data ◦Write observations and measurements ◦Be consistent when you are checking your experiments and recording the results ◦Create tables or charts (Data Tables and Pie Charts)

13 How can you draw conclusions? Answer the following questions in paragraph form (Always explain in detail using scientific vocabulary.): ◦Do your results/data support your hypothesis? Why or why not? ◦What are ways you can improve your data? ◦What would you do differently if you were to repeat the experiment?

14 How would you communicate results? Share data and information with others, such as scientists. Publish your findings in a book, magazine, journal, the internet.

15 Let’s try! Six bean plants are to be tested to see what happens if light is taken away. They all have the same type of container, the same amount of soil, and they will receive the same amount of water. Three will be placed in a sunlit window and 3 will be placed in a dark closet for 2 weeks. 1. What is the question? 2. Research. 3. Form a Hypothesis. 4. Test your hypothesis.

17 Let’s try continued…again. 6. Analyze results. 6a. How can you show your results? 7. Draw Conclusions? 7a. How do you write a conclusion paragraph?

Download ppt "Aim: What are the steps to the Scientific Method?" 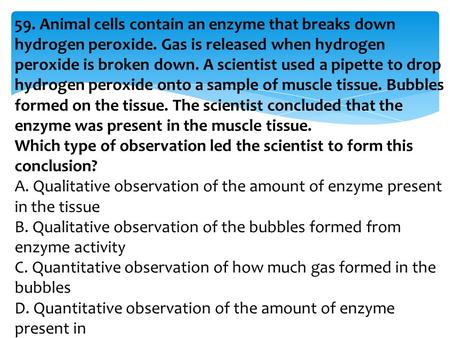