4 Rockets work according to… Newton’s 3rd law of motion: For every action there is an equal and opposite reaction

6 NASA: National Aeronautics and Space Administration NASA was formed in 1958 to compete with Soviet Union’s rocket program. –Occurred during the Cold War (United States vs. Soviets) –At this time, the Soviets were already ahead…

8 The Soviet Union launched the first artificial satellite, Sputnik 1, in December of 1957. This began the “Space Race” between the U.S. and Soviet Union, and influenced the creation of NASA

9 While the first attempt failed, the United States followed by launching Explorer 1, 4 months later in 1958.

10 Low Earth Orbit (LEOs): an orbit located a few hundred km above the Earth’ surface Satellites in LEO move quickly, placing them out of contact much of the time –Defense and spying Satellites in LEO eventually spiral toward Earth

11 Geosynchronous Orbit: an orbit much higher than LEO; satellite travels at a speed that matches the rotational speed of the Earth exactly Satellites in GEO are positioned above the same spot on Earth at all times. –Communication –Local Weather

13 Space Shuttle: a reusable vehicle that takes off like a rocket and lands like an airplane Can take up to 8 astronauts into Low Earth Orbit (LEO) to: -launch satellites -work on International Space Station Missions last up to two and a half weeks Section 4: Living and Working in Space

15 Space Station: long-term orbiting platform from which other vehicles can be launched or scientific research can be carried out. The International Space Station (ISS) is a collaboration the US and 15 other countries (Russia, Canada, Japan, Brazil, Belgium, Denmark, France, Germany, Italy, The Netherlands, Norway, Spain, Sweden, Switzerland, and the United Kingdom)

16 SKY LAB Sky Lab was U.S.’s first space station –Launched in ’73 –Fell into Indian Ocean in ’79 Remember…all objects in LEO will eventually fall to Earth, unless we prevent it

18 Project Gemini (1965-1966): 2-manned spacecraft Purpose: –To subject man and equipment to 2 week space flight –To rendezvous and dock with orbiting vehicles –To perfected methods of entering the atmosphere

21 Apollo 13 Scheduled to be 3 rd mission to land on moon Due to an explosion on the Service Module, they had to use the Lunar Module as a “life boat” and never made it to the moon They returned safely to Earth in the Command Module

22 The Return of the Apollo 13 Astronauts 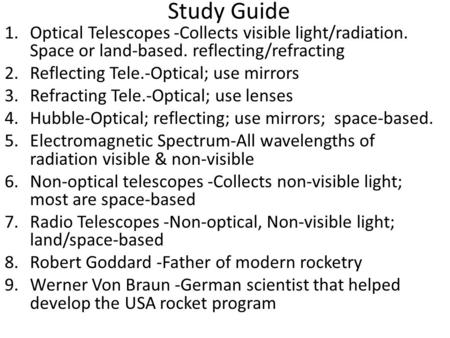