7 Steer from the Administration The Administration of Shropshire Council is determined to encourage collaborative working, consideration of alternative models of education provision and the more efficient use of delegated resources. It believes school governing bodies need to be challenged to address these issues and to ensure that the Shropshire school funding formula promotes more sustainable ways of working. The formularisation of the potential additional funding for Shropshire schools in 2015-16 could offer a degree of protection, but only in the very short term for the most financially vulnerable schools in the remotest communities. However, this must be linked to increasing awareness and understanding within individual school governing bodies, and among clusters of schools, of the potential impact of significant falls in projected pupil numbers in their local areas over the next five years. Any changes to the funding formula must place Shropshire schools in the best possible position to ensure a smooth transition to a national funding formula, which is likely to be implemented in the next parliamentary term. 7

9 Recommended Changes from April 2015 - Sparsity To capture Shropshire’s sparse schools the sparsity distance measure to remain at 3 or more miles for primary schools and 9 or more miles for secondary and all-through schools. The number on roll threshold to remain at <150 (21.4 average year group) for primary and <600 (120 average year group) for secondary 9

13 Consultation Questions Question 1 Do you agree with maintaining the sparsity criteria, in terms of distance and pupil number thresholds, as outlined in paragraph 15 of the consultation document, to ensure sparsity funding is targeted at Shropshire schools that are sparse? 13 Question 2 Do you agree with the basis for determining the additional sparsity funding recommended within the local funding formula from April 2015 as outlined in paragraphs 19 and 20 of the consultation document?

14 Recommended Changes from April 2015 – Pupil-led The remainder to be allocated on a per pupil basis through the AWPU Any increase to the AWPU funding within the funding formula to schools will have a corresponding impact on the level of minimum funding guarantee (MFG) a school receives. 14

15 Recommended Changes from April 2015 – Pupil-led As AWPU increases, MFG reduces This release of MFG allows more funding to be allocated through the AWPU 15

16 Recommended Changes from April 2015 – Pupil-led After taking into account the proposed increase to sparsity funding and the recycling of MFG, the additional funding allocated on a per pupil basis equates to £333 per pupil 16

18 Important Points for Schools MFG impact For schools in receipt of MFG protection any new additional funding may either all, or in part, be offset by a corresponding reduction to their MFG allocation initially 18 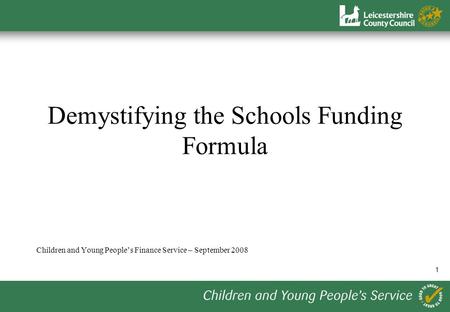