2 Significance of Spanish Missions The La Salle expedition alerted Spain to France’s interest in Texas. The Spanish decided that if they were to keep Texas, they must occupy it. Spanish missions and settlements provided a stronger hold on Texas than did the French traders.

3 Significance Today Early Spaniards originally named some of Texas’s settlements–San Antonio, Nacogdoches, and La Bahía. Many cities in Texas have the names of Catholic saints. These include San Marcos, San Augustine, Santa Elena, and many more.

6 Description of a typical mission: A religious settlement built on a quadrangle plan; a large courtyard surrounded by high walls with rooms or buildings along the inside of the walls

7 Within the mission walls are: Living quarters for soldiers, Indians, and priests Workshops such as blacksmith, carpenter, tailor, and pottery maker A chapel or small church School for the Indian children Storage place for grain, called a granary Storage place for weapons/ammunition, called an armory Cistern for water storage

19 Reasons Why the Mission System Failed a.Indians didn’t want to adopt a new culture. b.Too far away from Mexico, a source of supplies and help. c.Lack of financial support from the Spanish government ($)

20 Reasons Why the Mission System Failed d.Crop failures due to flood and drought. e.Jealousy of the shaman. f.Problems created by the Spanish soldiers.

21 Important Missions in Texas a.Ysleta (1682) The first mission in Texas, located in West Texas near present-day city of El Paso.

22 Important Missions in Texas b.San Francisco de los Tejas (1690) Alonso de Leon led Spanish troops who met the Caddo Hasanai people, whom they called “Tejas” which means friend. Angelina, a Hasanai woman, served as a guide and interpreter for the Spanish. Father Damian Massanet, a Catholic church official on the expedition, promised the Hasanai people he would return. Massanet returns and it became the first mission in East Texas near the present-day town of Weches.

23 Important Missions in Texas c.San Juan Batista (1699) Mission located along the Rio Grande near present-day town of Eagle Pass. Called the “Mother of Texas Missions” due to its vast supply of grain, cattle, and horses for missionaries.

24 Important Missions in Texas The French Threat Father Francisco Hidalgo was a missionary who asked the French to help create a mission there because the Spanish will not. The unexpected arrival of the French party led by Louis de St. Denis alarmed Captain Diego Ramon, the presidio’s commander. St. Denis was arrested but insisted that France had no plans to occupy East Texas. The Spanish viceroy and his council, or advisers, did not believe him. Result? New Missions in East Texas were ordered to be built and trade between France and Spain was stopped.

26 Important Missions in Texas d.San Antonio Missions – established because the Spanish needed a half-way point between the Rio Grande and East Texas missions (a 500 mile journey); supplies arrived slowly Camino Real – “Kings Highway” or “Royal Highway” was the first road in Texas that connected the Rio Grande and East Texas missions. San Antonio de Valero – the mission chapel that later became known as “The Alamo” – founded by Father Olivares in 1718.

28 Important Missions in Texas e.La Bahia (1749) Mission built near the site of the failed French Fort St. Louis (1685). Near present-day Goliad. Los Adaes and La Bahia both founded by Aguayo, governor of provinces of Coahuila and Texas. A province is one district of a country. 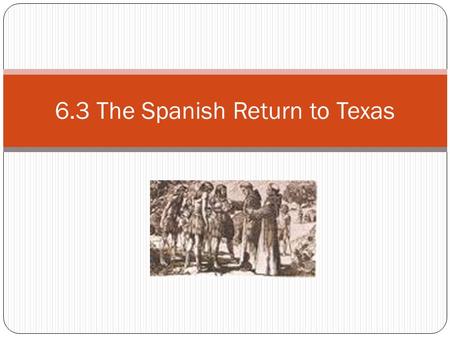 6.3 The Spanish Return to Texas 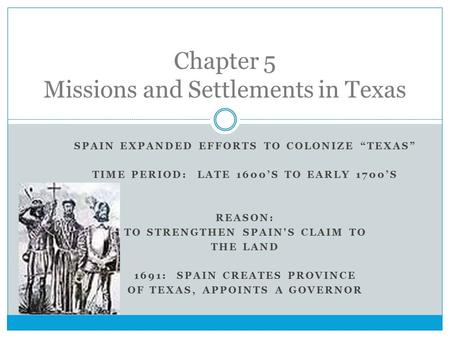 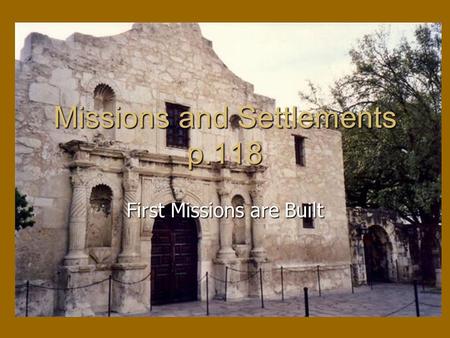 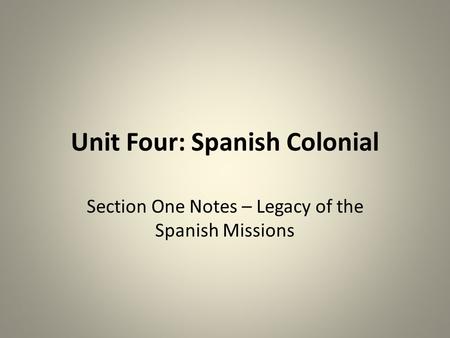 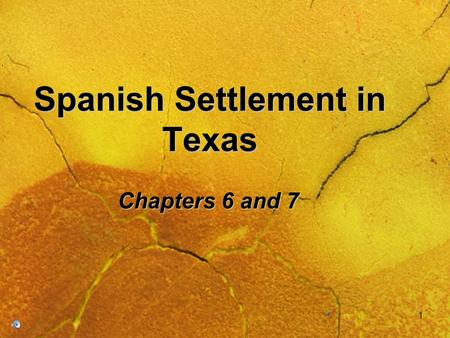 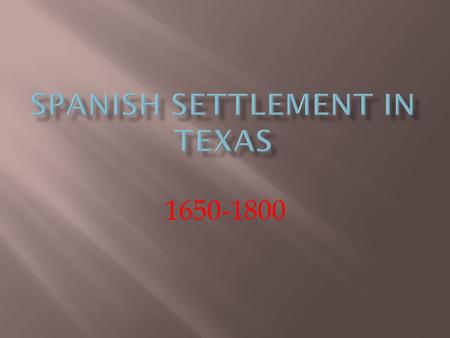  Two of the most powerful countries in Europe  Both wanted control of Texas, but needed to occupy land  Spain had explored Texas for gold. 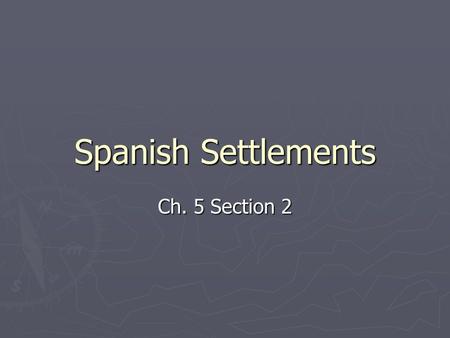 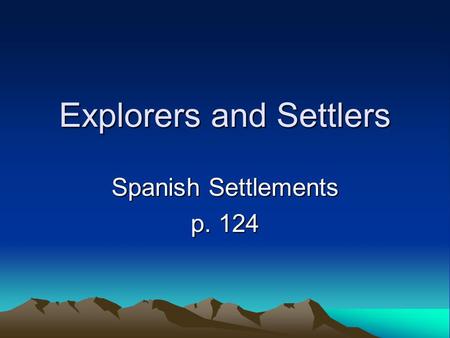 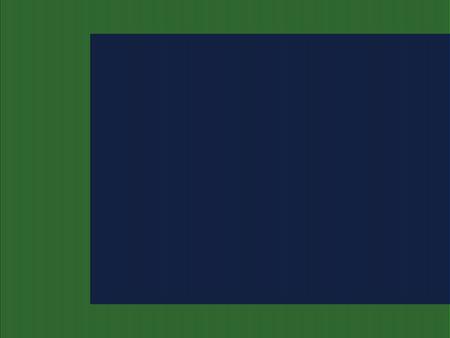 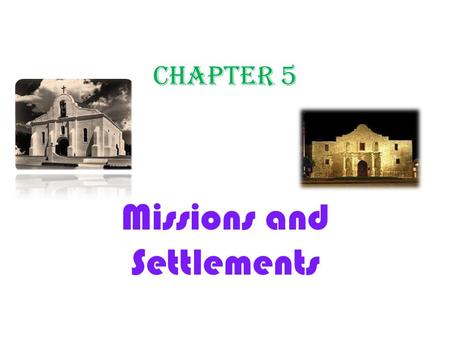 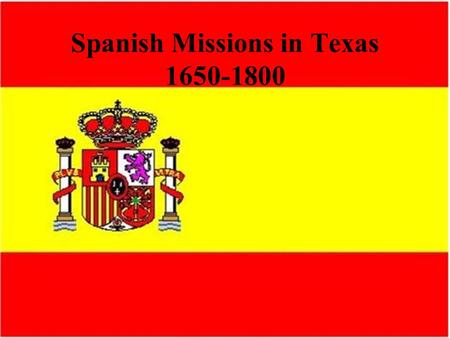 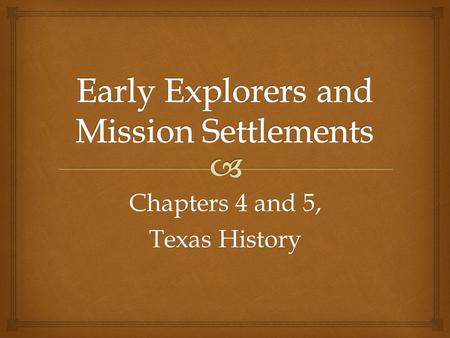 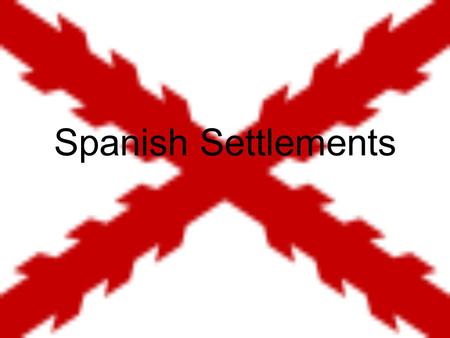 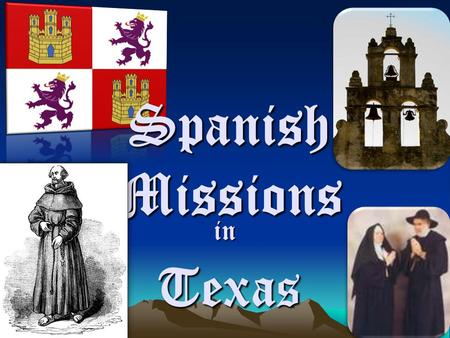 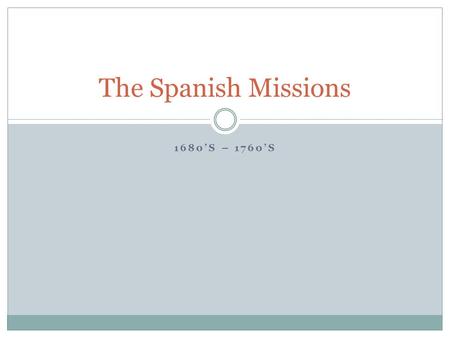 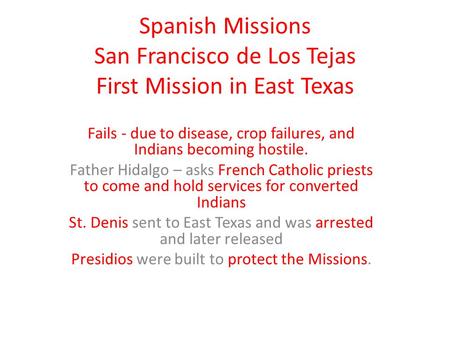 Fails - due to disease, crop failures, and Indians becoming hostile. 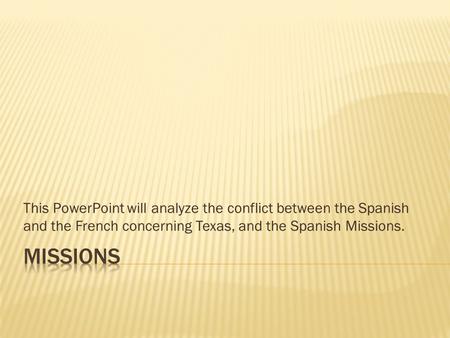 This PowerPoint will analyze the conflict between the Spanish and the French concerning Texas, and the Spanish Missions. Missions. 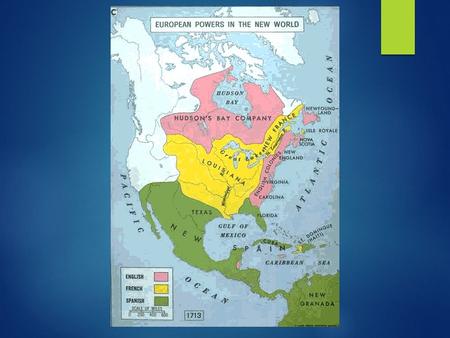 MISSIONS AND PRESIDIOS OF TEXAS (Under spain) 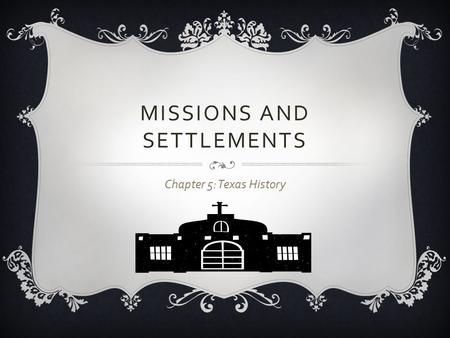 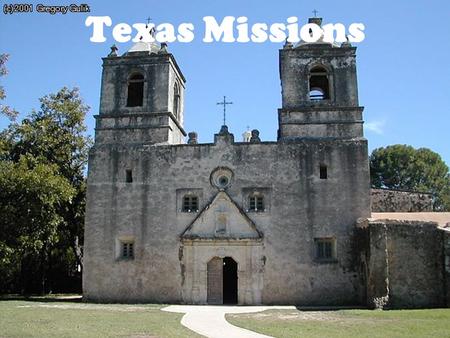