3 5. Climax – point of greatest emotional intensity, interest, or suspense 6. Conflict – central struggle between opposing forces a. External conflict – character struggles against an outside force b. Internal conflict – struggle exists in the mind of a character who is torn between opposing feelings or goals 7. Description – writing that seeks to convey the impression of a setting, a person, an animal, an object or an event by appealing to the senses 8. Details – particular features of things used to make descriptions more accurate & vivid 9. Dialect – variation of language spoken by a particular group, within a particular region 10. Dialogue – conversation between characters 11. Exposition – part of plot in which characters, setting, & situations are introduced 12. Falling action – action that follows the climax 13. Figurative language – language used for descriptive effect, often to imply ideas indirectly

4 14. Flashback – an interruption in a narrative that tells about something that happened before that point or before the story began 15. Foreshadowing – use of clues by an author to prepare readers for events that will happen in a story 16. Hero – literary work’s main character, usually with admirable qualities 17. Idiom – figure of speech whose meaning can’t be obtained & might even appear ridiculous by joining meanings of words composing it 18. Imagery – language that emphasizes sensory impressions to help the reader see, hear, feel, smell, & taste the scene described in the work 19. Irony – form of expression in which the intended meaning of the words used is opposite of their literal meaning a. Verbal irony – occurs when a person says 1 thing & means another b. Situational irony – occurs when the outcome of a situation is the opposite of what was expected 20. Main idea – most important idea expressed in a paragraph or an essay

5 21. Metaphor – figure of speech that compares or equates seemingly unlike things 22. Mood – emotional quality or atmosphere of a story or poem 23. Narrator – person who tells a story 24. Plot – sequence of events in a story, novel, or play 25. Plot twist – unexpected turn of events in a plot 26. Point of view – relationship of the narrator, or storyteller, to the story a. First person – story told by 1 of the characters referred to as “I” b. Limited 3 rd person – narrator reveals thoughts of only 1 character but refers to that character as “he” or “she” c. Omniscient – narrator reveals the thoughts of several characters 27. Prose – writing that is similar to everyday speech & language 28. Protagonist – central character in a story or poem 29. Resolution – part of a plot that concludes the falling action by revealing or suggesting the outcome of the conflict

6 30. Rising action – part of a plot that adds complications to the problems in the story & increases reader interest 31. Sequence of events 32. Setting – time & place in which events of a story occur 33. Simile – figure of speech using like or as to compare seemingly unlike things 34. Stereotype – character not developed as an individual but as a collection of traits & mannerisms shared by members of a group 35. Style – author’s choice & arrangement of words & sentences 36. Suspense – feeling of curiosity, uncertainty, or dread about what is going to happen next 37. Symbol – any object, person, place or experience that means more than what it is 38. Symbolism

7 39. Theme – main idea of a story, poem, novel, or play, usually expressed as a general statement a. Stated theme – theme stated directly b. Implied theme – theme revealed gradually through other elements 40. Tone – attitude of the narrator toward subject, ideas, theme, or characters 41. Voice – an author’s distinctive style or the particular speech pattern of a character in a story

8 36.Dramatic irony - 36.Dramatic irony - when the audience knows something that the characters in the drama do not 37.Connotationthe associated or secondary meaning of a word 37.Connotation - the associated or secondary meaning of a word Example: rich = abundantly supplied with resources (dictionary). Connotation of rich = wealthy, affluent, well- to-do 38.Denotation - the dictionary definition of a word 39.Hyperbole - an overstated exaggeration Example: I’m so hungry I could eat a horse, I’ve read that book a million times, Yo mama’s so fat... 40.Plot Complication - The part of the plot when conflicts develop and suspense is built 41.Oxymoron - a figure of speech in which contradictory terms are combined Examples: deafening silence, cruel kindness, icy hot, fun run, boneless ribs, junk food 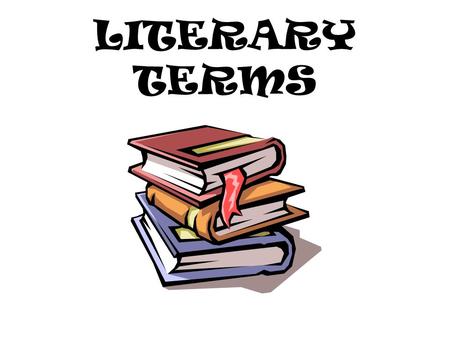