2 What is Ozone? Ozone is present high in our stratosphere as a gas.
Molecules of ozone absorb ultraviolet (UV) light emitted by our Sun. By shielding the Earth’s surface from most of the sun’s UV light, the ozone acts like sunscreen for all living organisms.

3 Ozone Creation As ozone molecules absorb UV light they are destroyed, therefore ozone needs to be continually replenished. Ozone is formed throughout the atmosphere in multistep chemical processes that require sunlight.

5 You can also write it as an equation…

7 The Ozone Layer Ozone in the atmosphere isn’t all packed into a single layer at a certain altitude above the Earth’s surface; it’s dispersed. “The ozone layer” is simply a region where ozone is more common than it is at other altitudes.

8 The Dobson Unit is a way to describe how much ozone there would be in the column if it were all squeezed into a single layer.

9 How much ozone compared to the rest of the atmosphere?
If all of the air in a vertical column that extends from the ground up to space were collected and squeezed together at a temperature of 0 degrees Celsius and a pressure of 1 atmosphere, that column would be 8 kilometers thick (or about 5 miles).

10 What are CFC’s? Chlorofluorocarbons (CFCs) are nontoxic, nonflammable chemicals containing atoms of carbon, chlorine, and fluorine. They were used in the manufacture of aerosol sprays, air conditioners in homes and cars, bug spray, paints, cleaning solvents, and other health care products. Scientists have estimated that a single chlorine atom from CFC can destroy 100,000 ozone molecules.

12 How do CFC’s destroy ozone?

14 The animation illustrates how one chlorine atom in the stratosphere can destroy up to 100,000 ozone molecules!

19 Arctic Ozone Hole If similar in size to the Antarctic Ozone Hole, could  expose over 700+ million people, wildlife and plants to dangerous UV ray levels. The likely hood of this happening seems inevitable based on the deterioration of ozone layer caused by the effects of global warming on the upper atmosphere. 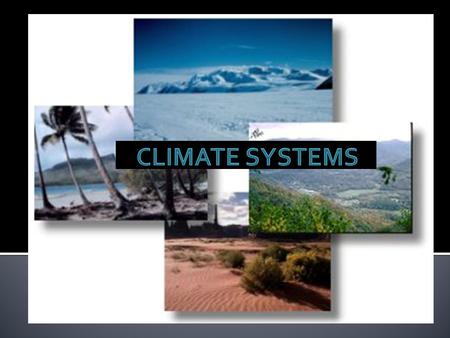 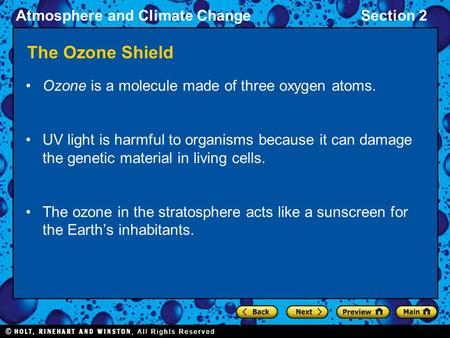 Atmosphere and Climate ChangeSection 2 The Ozone Shield Ozone is a molecule made of three oxygen atoms. UV light is harmful to organisms because it can. 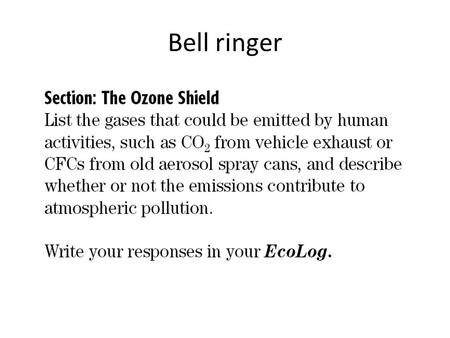 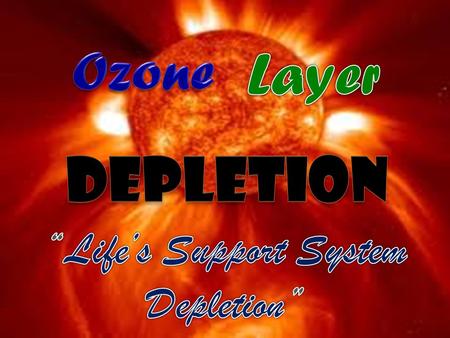 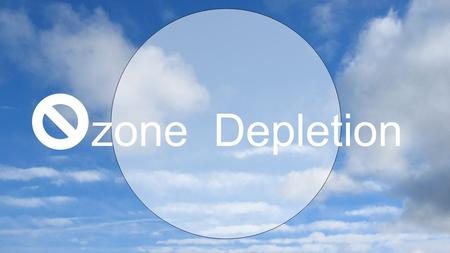 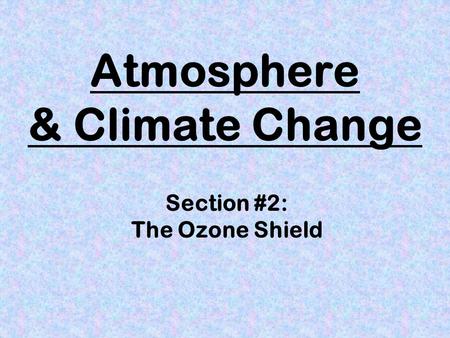 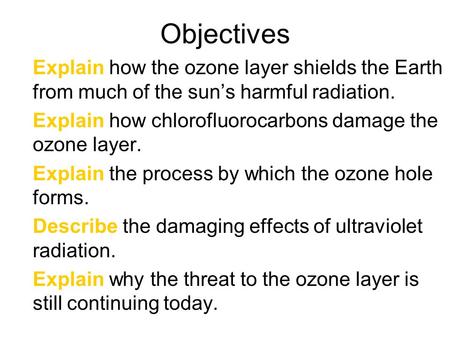 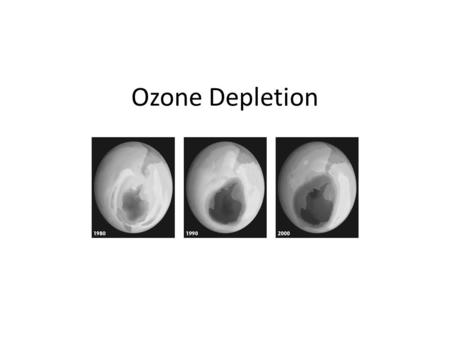 Ozone Depletion. What is the ozone layer and where is it found? The ozone layer is the layer of the atmosphere at an altitude of 15 to 40 km (stratosphere) 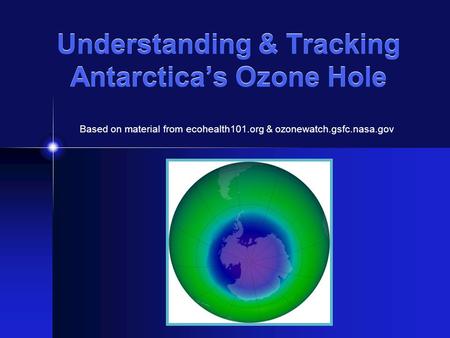 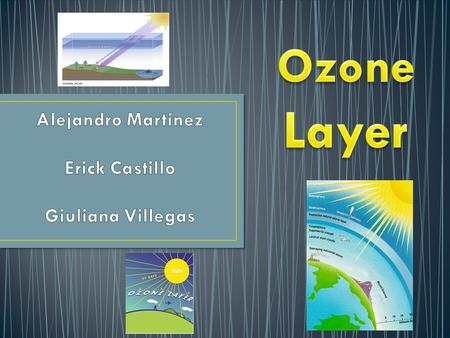 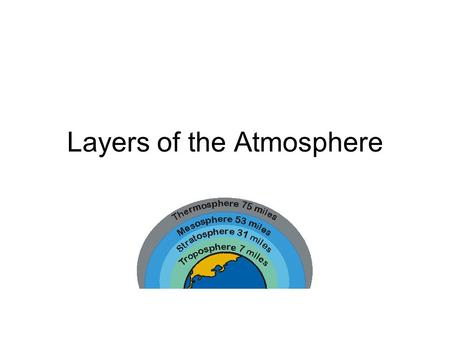 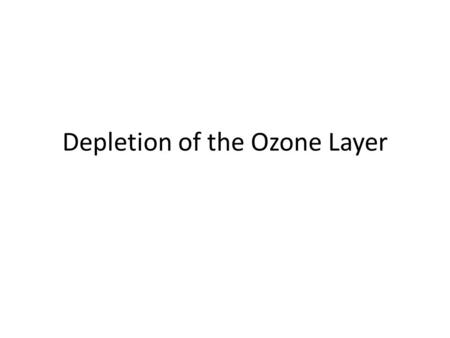 Depletion of the Ozone Layer. Introduction: The ozone layer or stratosphere is a belt of naturally occurring gas which envelops the Earth. 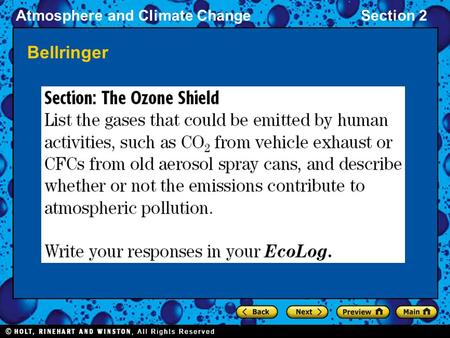 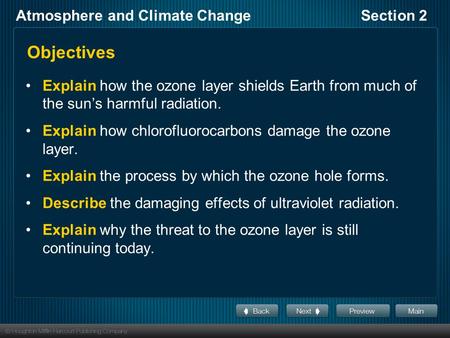 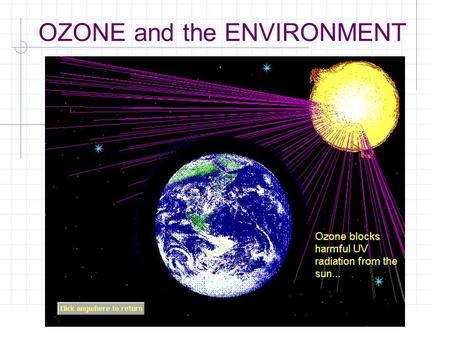 OZONE and the ENVIRONMENT 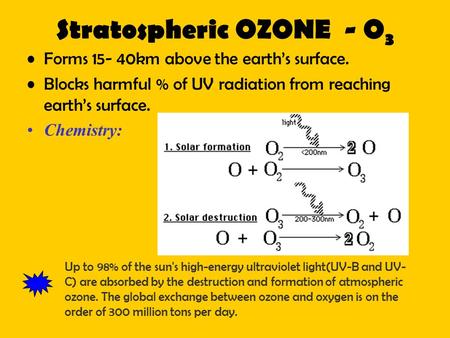 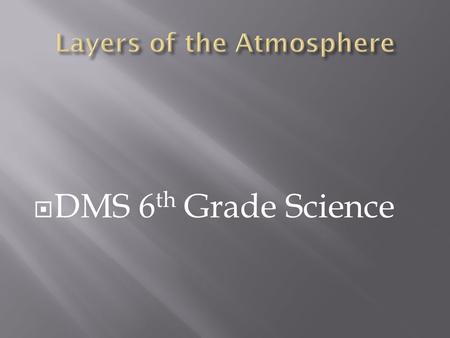 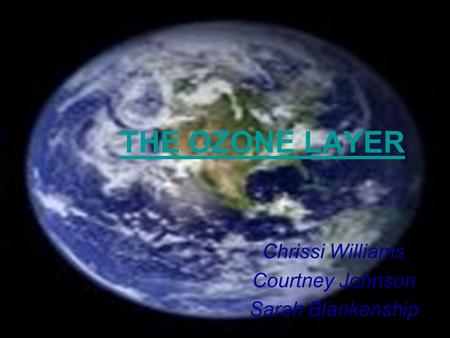 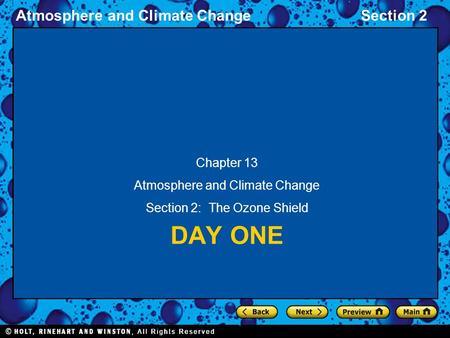