2 Urban Reform During the Progressive Era (1890-1920) ■From 1890 to 1920, reformers tried to clean up problems (“progress”) created during the Gilded Age: –Cities were plagued by slums, crime, disease, tenements –City, state, & national gov’ts were seen as corrupt & unresponsive to the needs of Americans –Corporate monopolies limited competition & workers’ wages

3 The Social Gospel Movement Social Gospel ■In the 1880s, many middle-class Protestant Christians embraced the Social Gospel movement: –To honor God, people must put aside their own desires & help other people, especially the poor –These ideas helped inspire Progressive reform in U.S. cities

10 Prohibition of alcohol in the states prior to 1920

16 Conclusions ■The Progressive movement began as an attempt to fix urban problems –Reformers lacked unity & were dedicated to their own causes –But their efforts led to a shift: gov’t began to take responsibility for citizens & intervene in their lives –Unlike the Populists, these reform efforts led to real change

20 The Women’s Movement ■Women reformers began to call attention to their own lack of rights: –In most states, married women could not divorce or own property –Women could not vote, but black, immigrant, & illiterate men could –Women workers were paid less than men for doing the same jobs –Middle & upper class women were expected to serve domestic & child rearing roles in the home Quick Class Discussion: In what ways were women discriminated against or deprived of the same rights given as men?

24 Women’s Suffrage ■The most significant reform for women was voting rights (suffrage) –Women demanded suffrage since Seneca Falls in 1848 –Were frustrated in 1870 when the 15 th Amendment gave black men the right to vote but not women –In 1890, the National American Women Suffrage Association (NAWSA) was formed

29 African-American Reforms ■But, black leaders were divided on how to address racial problems –Booker T Washington –Booker T Washington was Harvard educated, studied black urban culture, & was 1 st president of Tuskegee University –His “Atlanta Compromise” stressed black self-improvement & accommodation with whites The wisest among my race understand that the agitation of questions of social equality is the extremist folly, and that progress in the enjoyment of all the privileges that will come to us must be the result of severe and constant struggle rather than of artificial forcing —Booker T. Washington

30 ■W.E.B. DuBois ■W.E.B. DuBois was more aggressive Niagara Movement ■DuBois led the Niagara Movement in 1905 calling for immediate civil rights, integrated schools, & promotion of the “Talented 10 th ” to be the next generation of black civil rights leaders African-American Reforms We claim for ourselves every single right that belongs to a free American, political, civil and social, and until we get these rights we will never cease to protest and assail the ears of America —W.E.B. DuBois

32 Reforms for African-Americans ■Unlike women, African-Americans did not see significant changes: –Black reformers failed to convince state or national politicians to offer equality –By the end of the Progressive Era, segregation & lynching were common throughout the South & in many parts of the U.S. 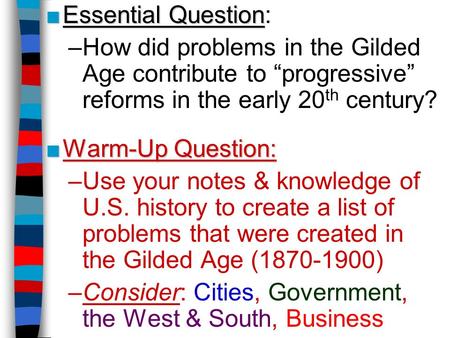 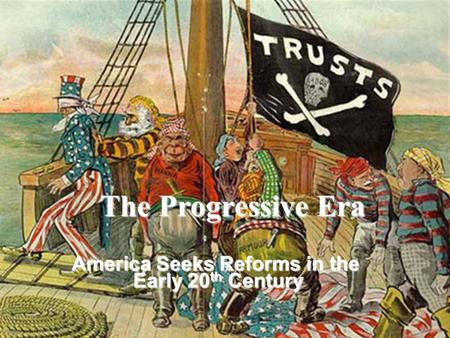 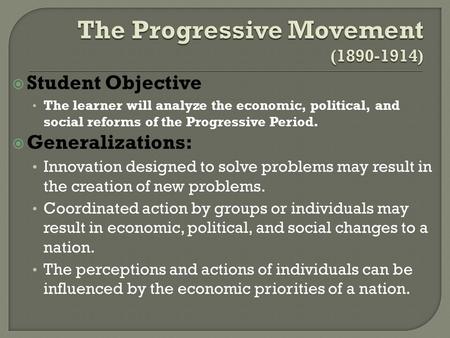 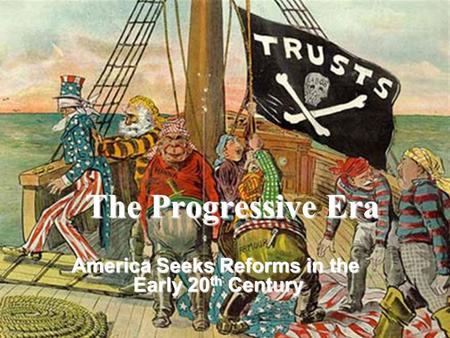 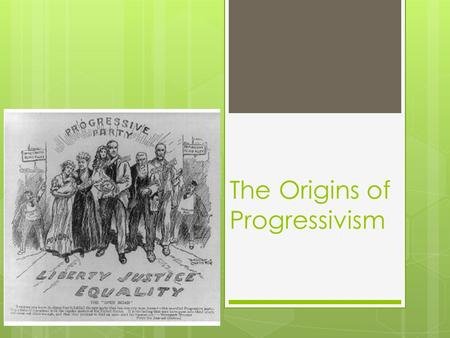 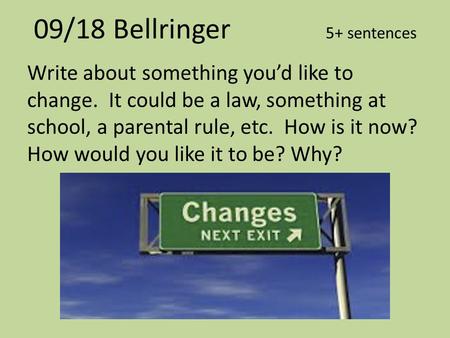 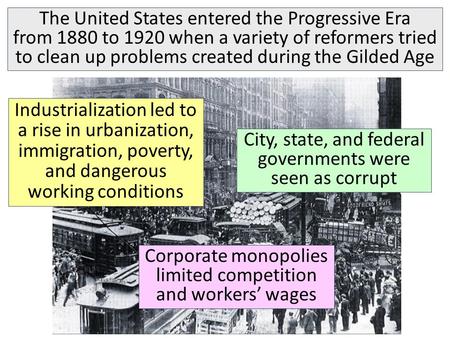 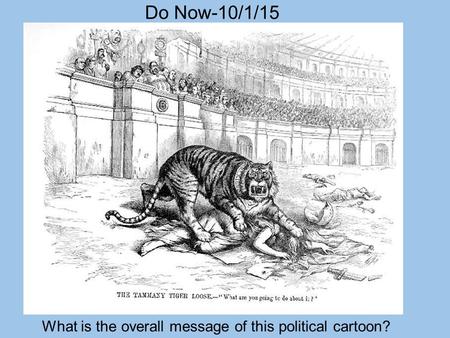 Do Now-10/1/15 What is the overall message of this political cartoon?